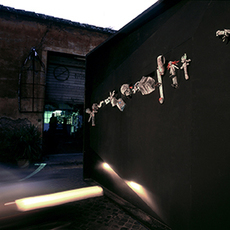 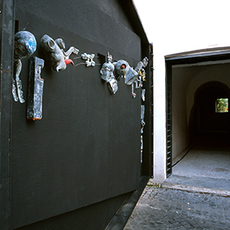 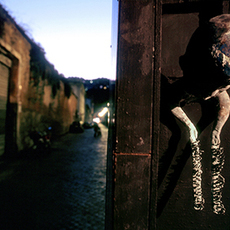 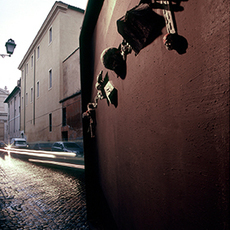 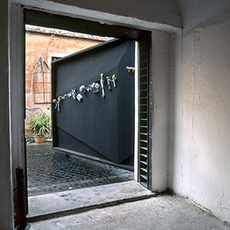 The 30 of October Fondazione Volume! presents the work Enzo Cucchi has expressly conceived for the space in Via San Francesco di Sales.
This exhibition summarizes the directions Cucchi has followed in his artistic research -from his début into Art till nowadays- allowing us to appreciate the surprising iconographical richness and variety of his work, which has always juxtaposed a contemporary re-assessment of the figuration to a careful meditation on the Historical Vanguards.
The intervention is not only an aesthetic action but also a political one. The work goes down in the street, concretely interacting with the surrounding reality and expanding its specific context (the exhibition space) till to reach the next buildings – in primis the “House of the Women” before. This work tries to activate a dialogue with the cultural and topographic context of the area but also to open a dialectical exchange about socio-political arguments (roles, powers, strategies, classifications, prejudices) aiming to decode them through an intellectual approach.
Cucchi has imagined a special “manoeuvre” which is integral part of his project: he gives motion to his work through giving it a real functionality. The great door (looking like a house in perspective -a recurring iconography of Cucchi’s painting), put on the Volume! entrance, can be alternately opened on the street, and so it temporary blocks the street through anchoring to the front building, and closed, blocking the access to the exhibition space. The visionary strength of Cucchi’s imagination takes its form through a mastodontic feast- machine that, besides creating a concrete connection between the art place and the urban area, ideally refers to the baroque custom of using the street as the place of collective celebration, favouring the populace active participation to the rite of moving the complex scenic sculptures expressly conceived for the ceremonial or commemorative religious or political events.
The door drags on the street one of the most authentic and intriguing transpositions of Cucchi‘s symbolical sign: the bronze sculpture, which in this case keeps up the form of “idols”- the studs marking the work’s perimeter like fragments of independent and self-sufficient representations.
The bronze – because of the harsh way the sign enters in it- is the matter, the most adequate way to translate into a three-dimensional form those expressive features Cucchi usually uses for drawing.
These two different technical moods seem to satisfy the undisciplined freedom of his graphical sign, which dominates itself through self-censuring as with the vicious holes of the bronze fissures, as with the obsessive profusion of the stroke on the paper. These moods also satisfy the artist’s sign need for “resting” which it fulfils as through nesting into the darkness of the material’s chiselling as through imploding into the drawing’s inking layers.