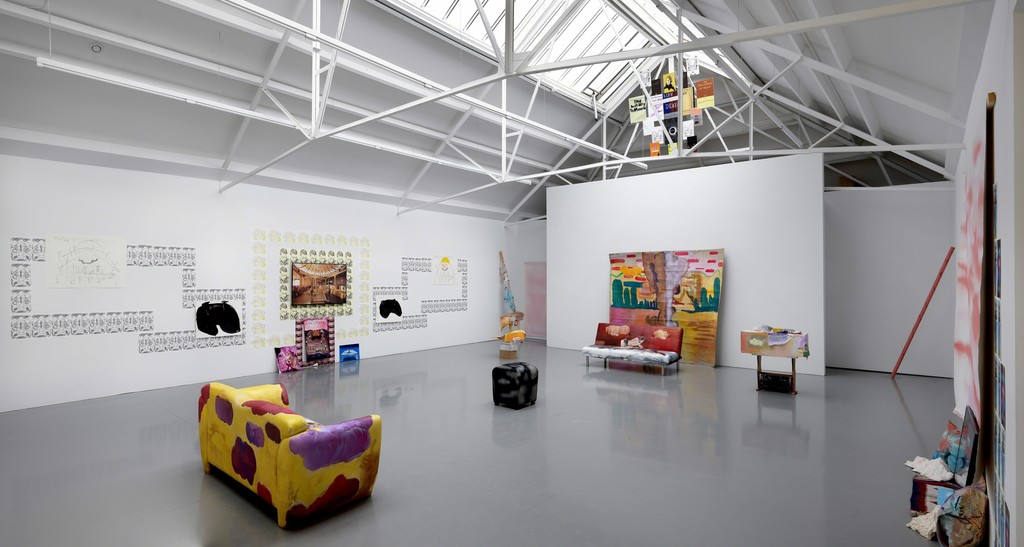 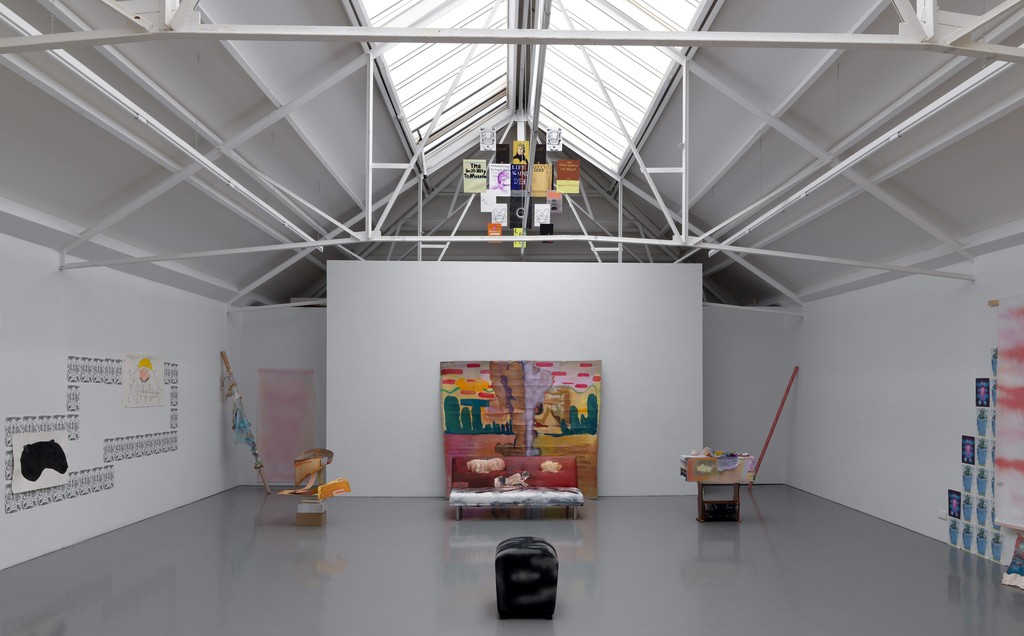 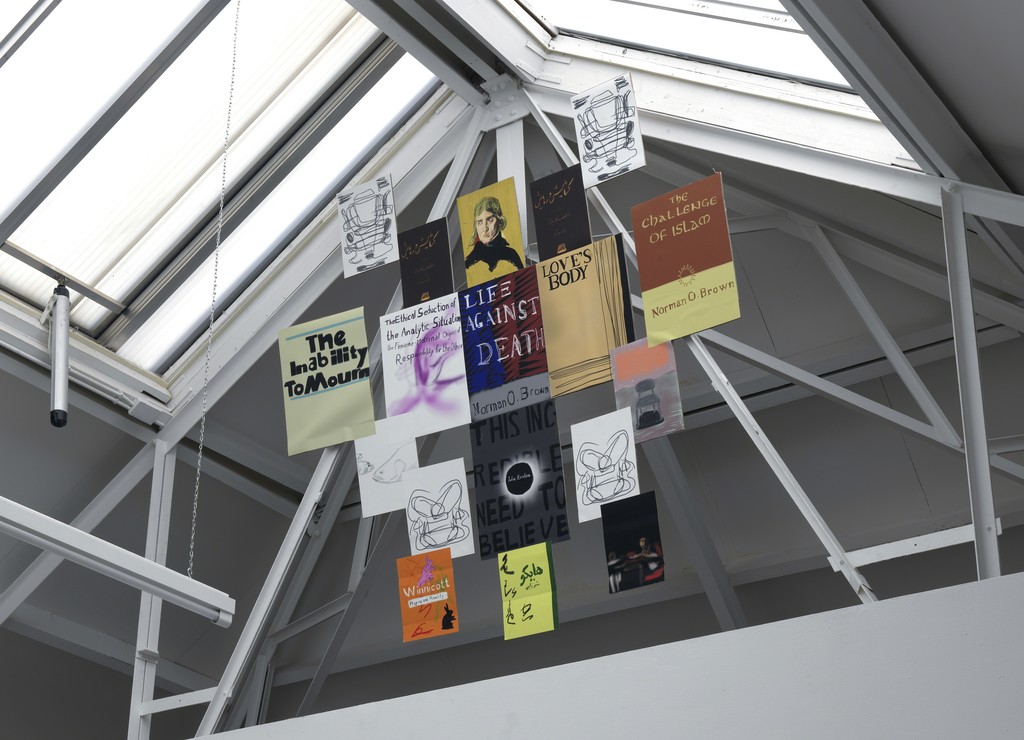 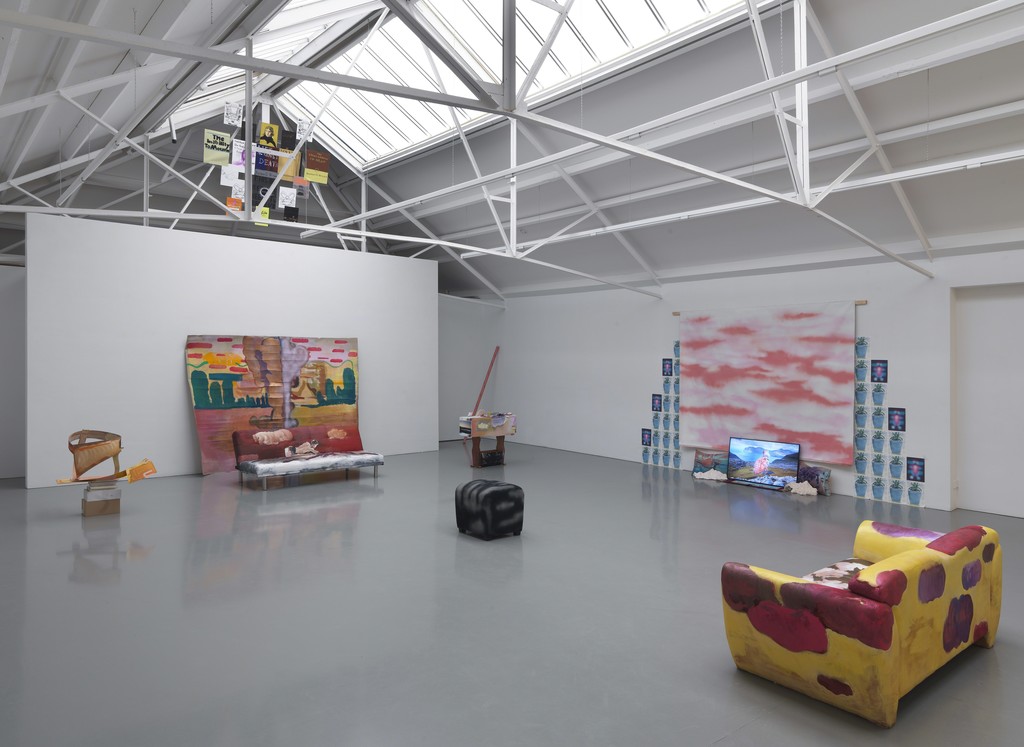 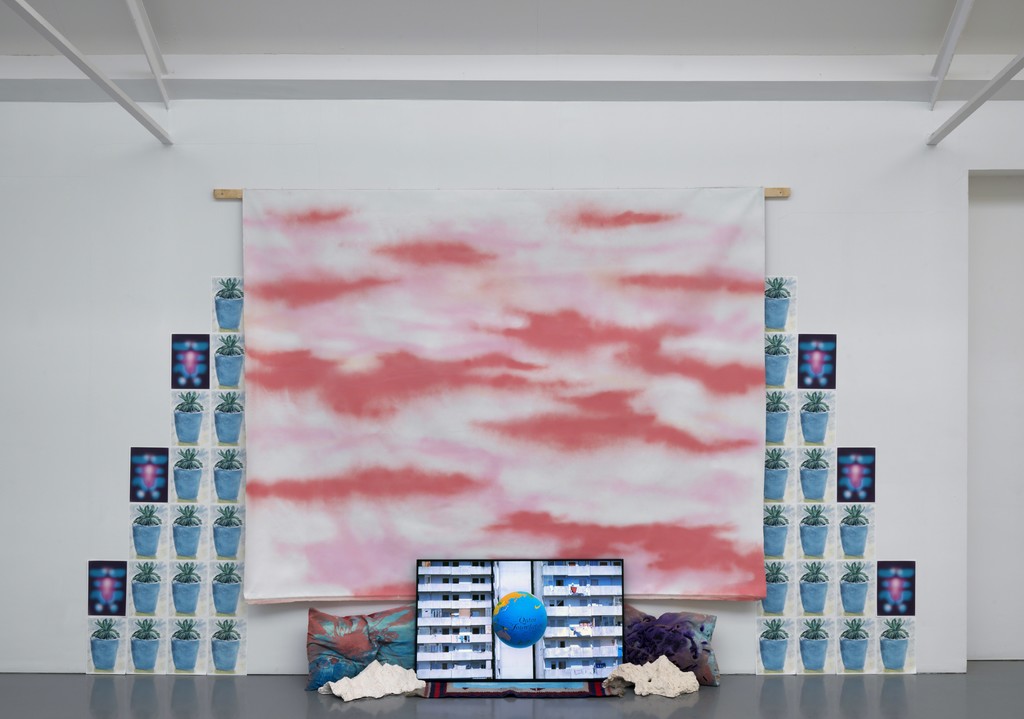 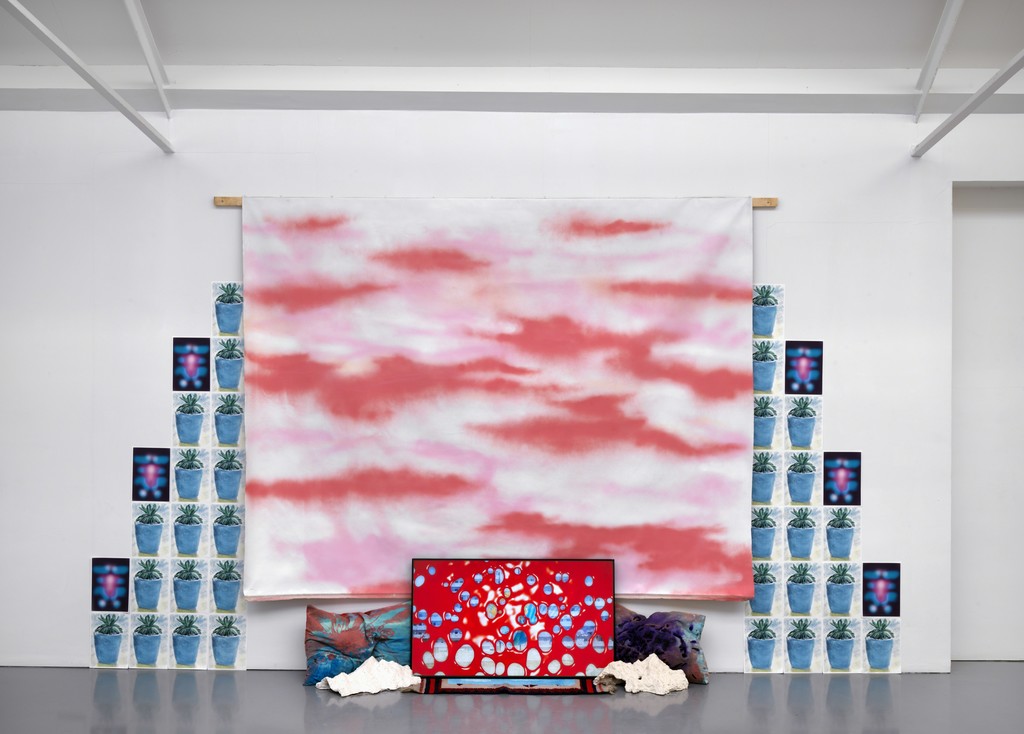 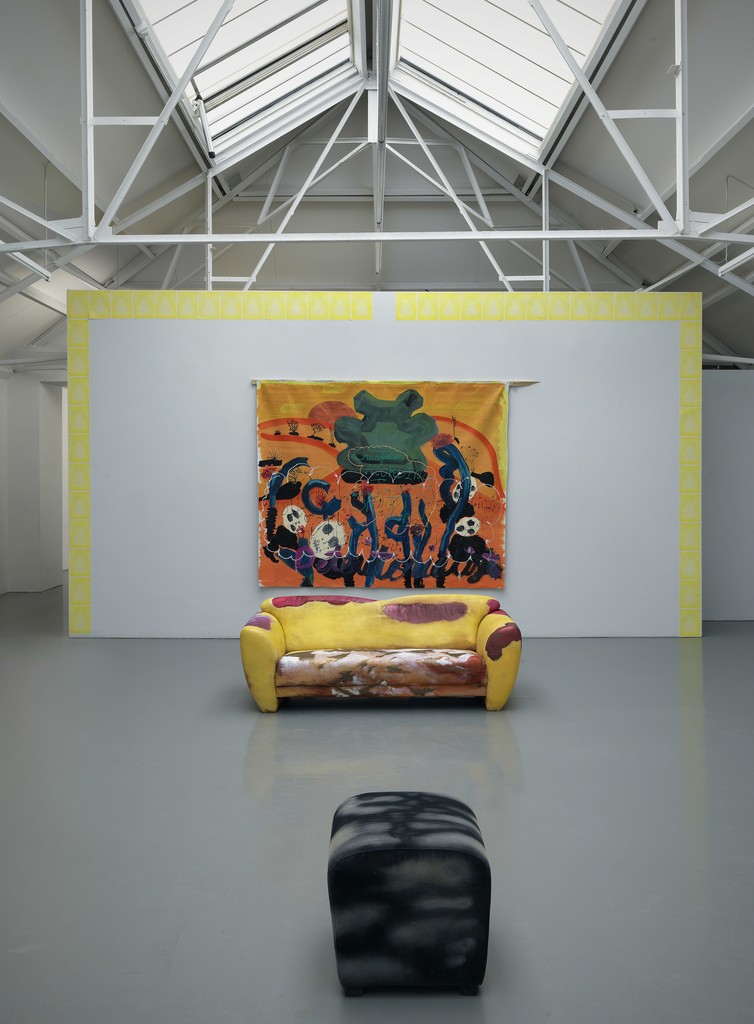 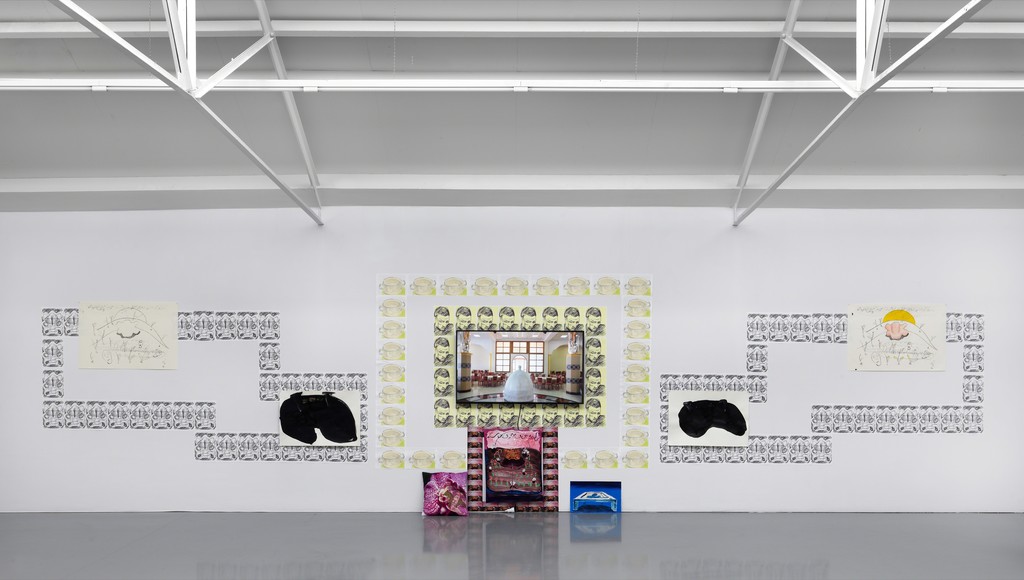 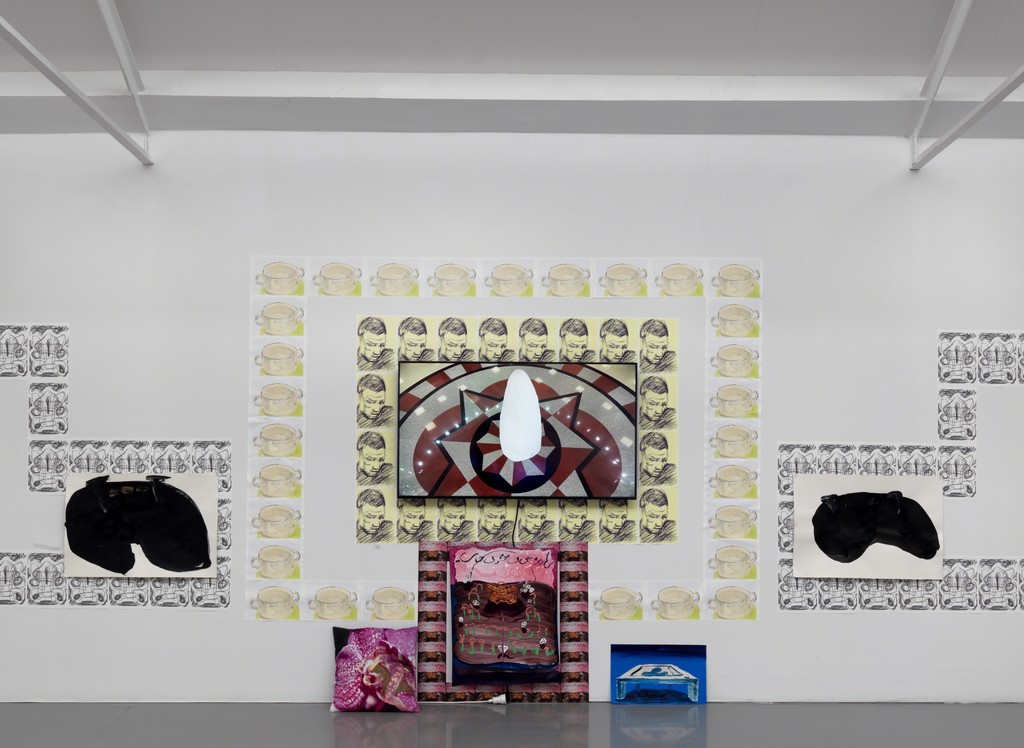 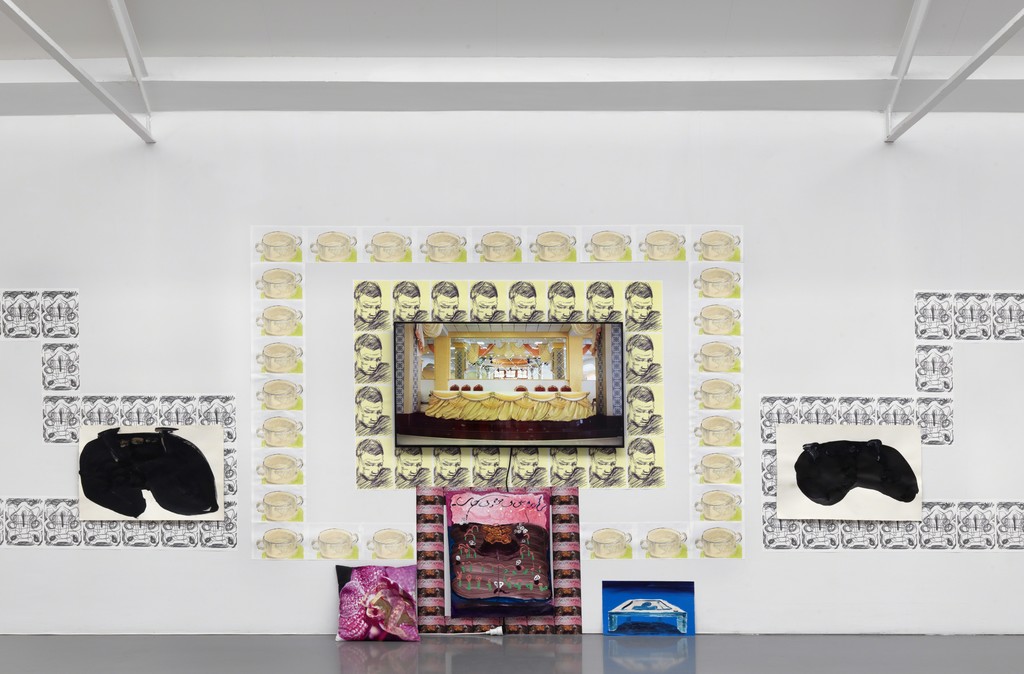 For this exhibition, Sam Samiee created an immersive, painterly installation, that, through a playful ornamentation, incorporates video works by Taus Makhacheva and Kareem Lotfy. Samiee does not shy away from the ornamental. His so called I-pad drawings, for example, drawn with a simple application, are photocopied and multiplied to form ornamental framings. Within the context of his total installations, these patterns move beyond the decorative and reveal a fragmented autonomy.

In Taus Makhacheva’s video work ‘A Space of Celebration’, the camera slowly pans the space of the ceremonial, within a wedding hall in Makhachkala, the capital of Dagestan, her hometown. The decorative patterns here are undoubtedly fake and form an eclectic architectural mixture, combined with the equally eclectic mixture of secular and religious traditions that today form the wedding ceremony. Two anthropomorphic figures move, freeze, play and dance in the halls, moving towards each other in an attempt to relate to each other and their surroundings.

Kareem Lotfy’s video work ‘Le Monde Chico’ is a playful pun on the so-called ‘post-internet aesthetics’ through which he questions the inherent flatness of digital images. Derived from a certain popular strand of rap video clips from France, The Netherlands and elsewhere in Europe, Lotfy “copies” their use of logos, brands, visual aesthetics, and a very specific choice in landscape and architecture. This extensive frame of references comes together in a slide-show composition.

One would usually associate ‘Baroque’ with the late sixteenth and seventeenth century style in European art. Grandeur, sensuous richness, drama, movement and tension would be its ingredients to evoke emotional states, appealing to the senses. The three young artists in this exhibition, each in their own manner, reflect on ornamental motives and symbols in order to tell another, perhaps more unknown story, cross referencing influences over time and geographies. Should we read these motives as aesthetics or as discourse?

Taus Makhacheva was born in 1983 in Moscow and lives and works in Makhachkala and Maastricht. She holds a BA in Fine Art from Goldsmiths College, London and an MA from the Royal College of Art, London. She is currently a resident artist at the Jan van Eyck Academy in Maastricht.

Sam Samiee was born in 1988 in Tehran and lives and works in Amsterdam. He studied painting and industrial design at the Art University in Tehran as well as at the AKI in Enschede. Samiee is currently a resident artist at the Rijksakademie in Amsterdam.