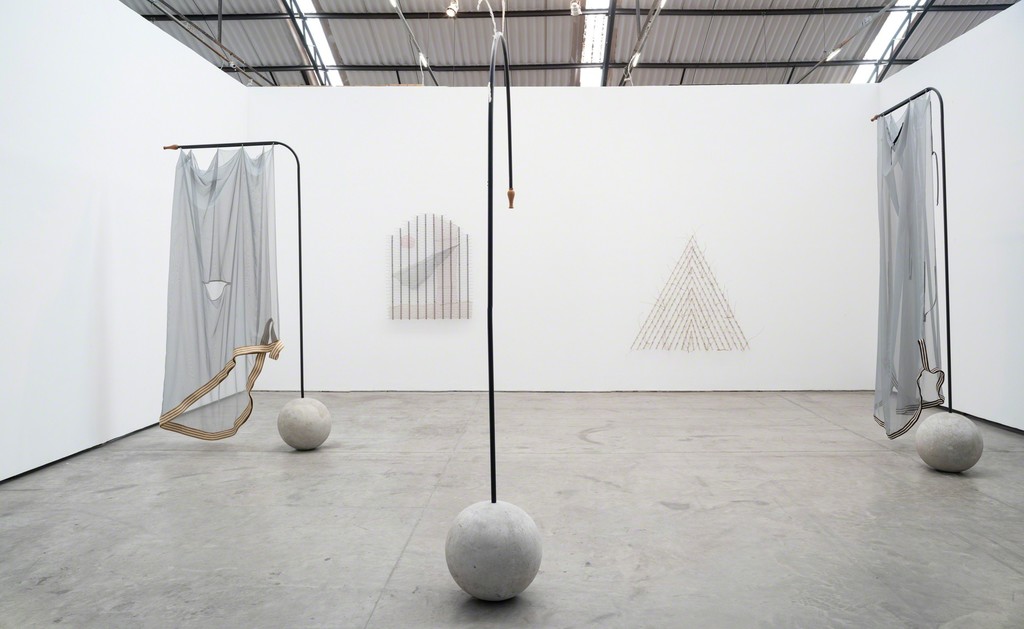 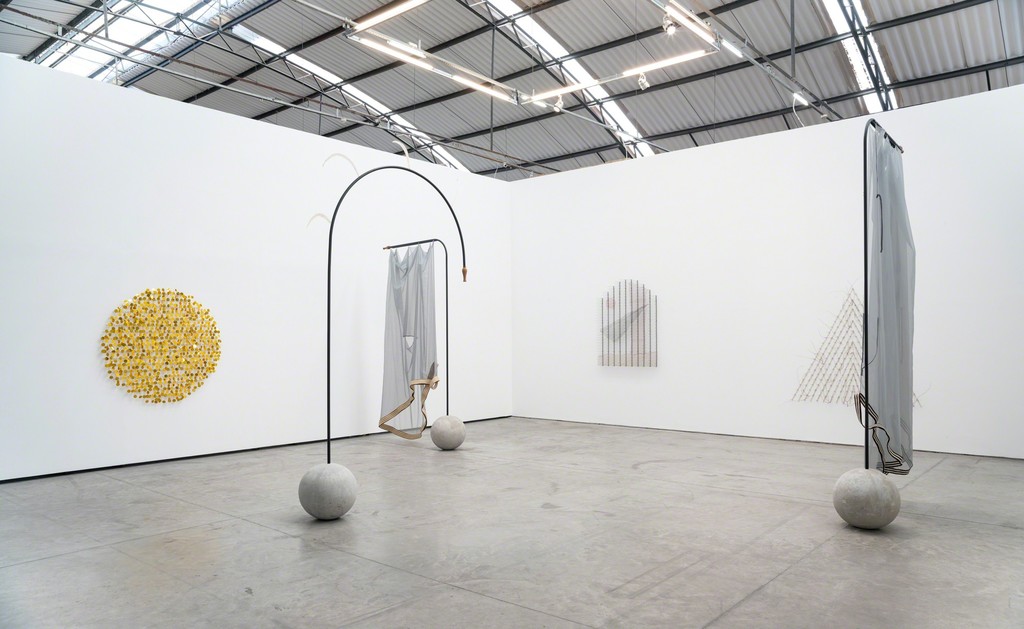 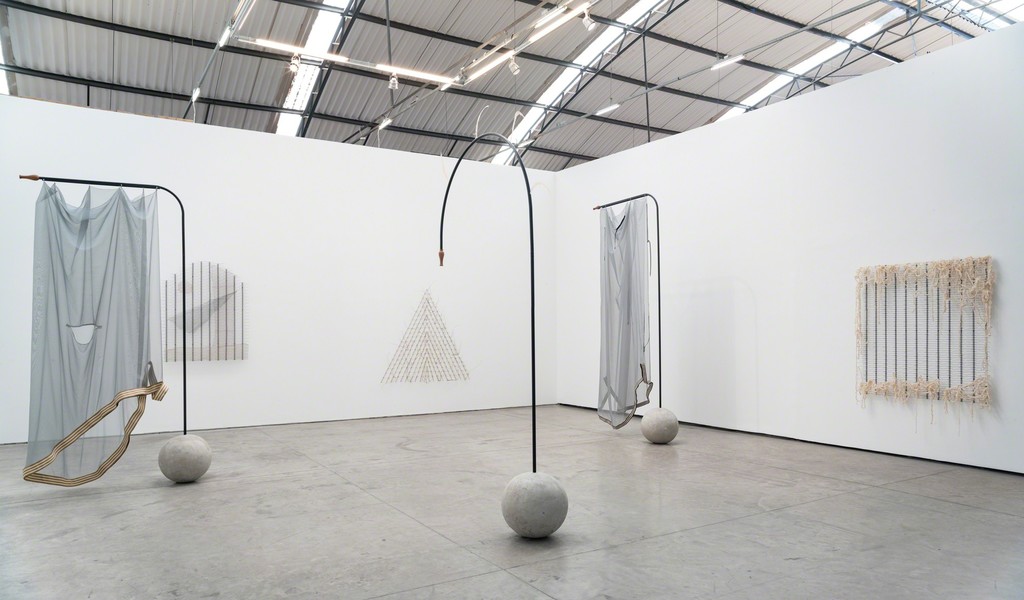 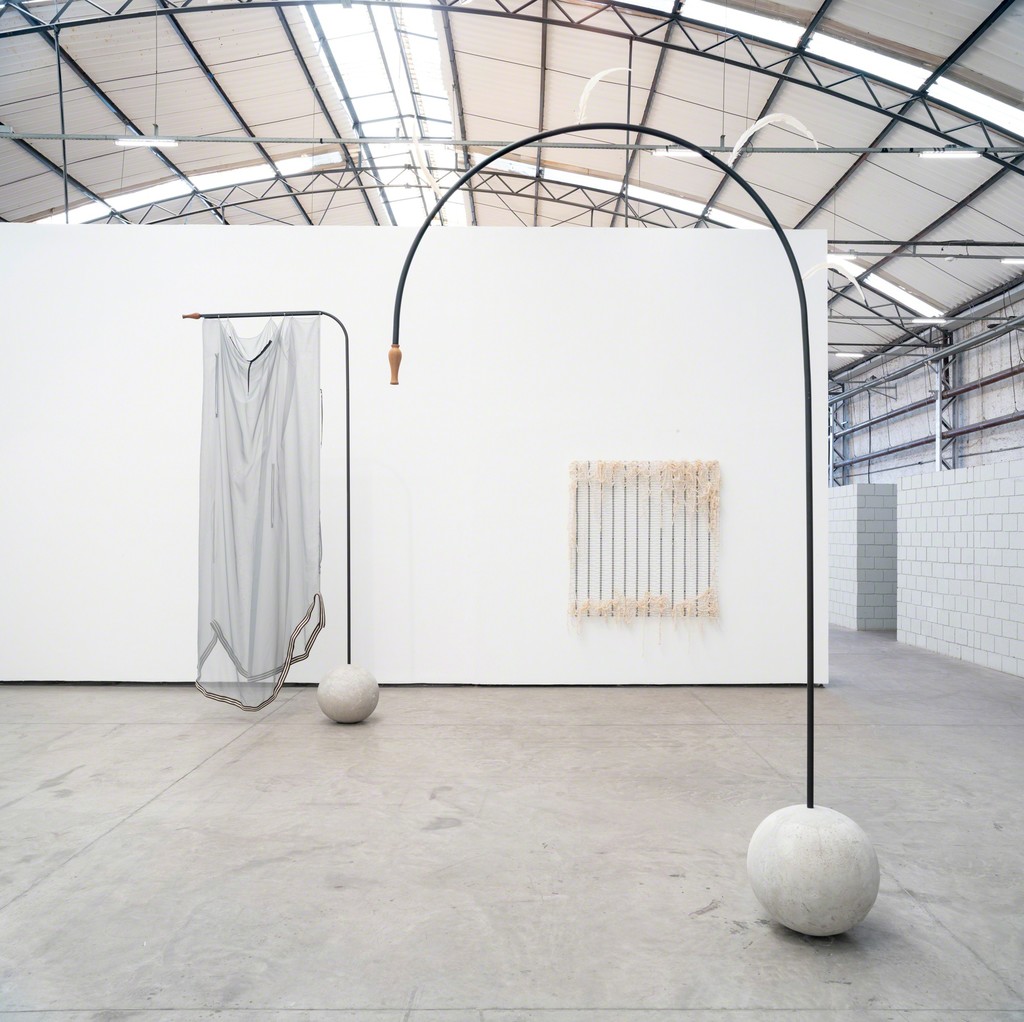 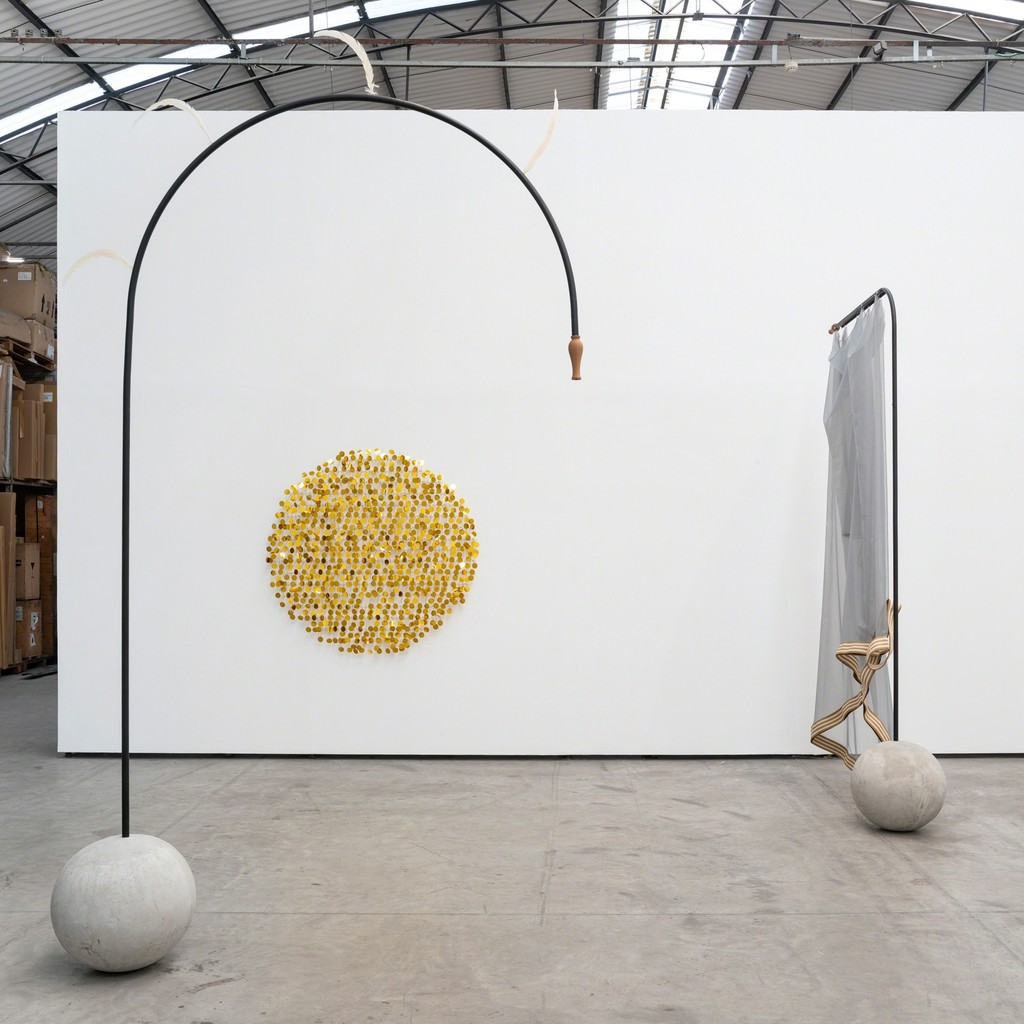 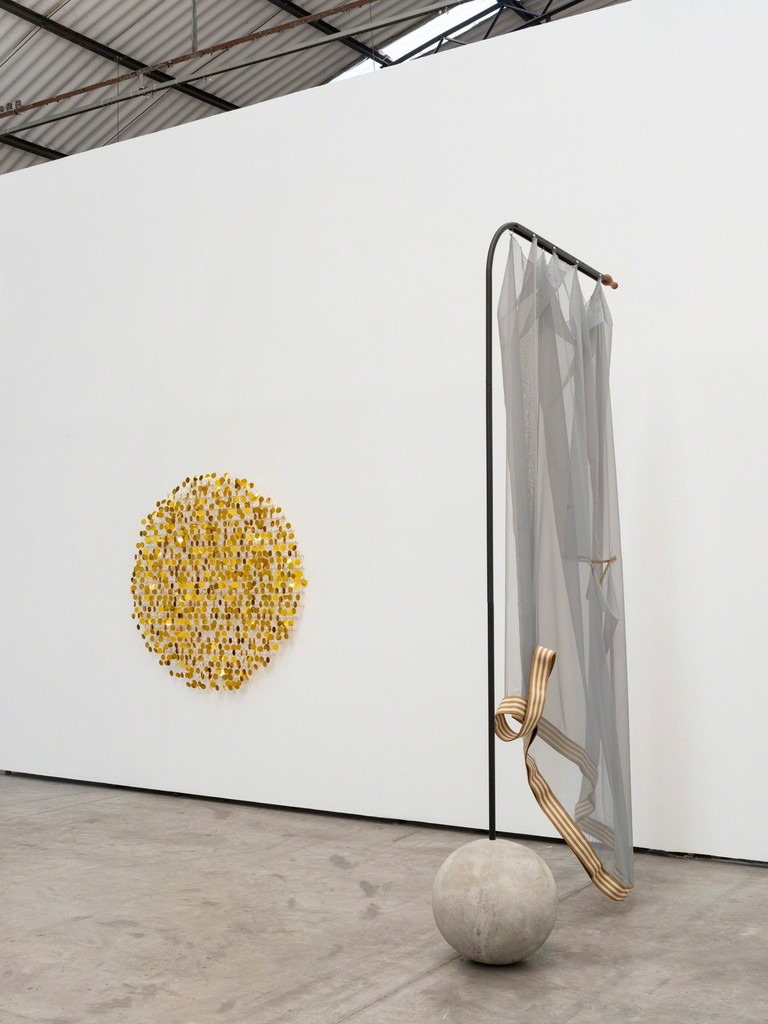 In Hiato [Hiatus] a new exhibition by Rodrigo Matheus at Fortes D'Aloia & Gabriel | Galpão, materials from urban architecture are rearticulated in works that evoke the domestic environment. The artist thus explores the relationship between interior/exterior as a way of dealing poetically with the very nature of his sculptural work. This semantic shift creates a range of meanings – and it is precisely at this borderline that Matheus operates, forging new and unexpected relationships to the elements that make up his sculptures.
On the occasion of the opening, the artist will also launch his monograph by Editora Cobogó, a publication with texts by Matthieu Lelièvre, Philip Monk and Kiki Mazzucchelli that cover his artistic career over the last 10 years.
Moeda [Coin] is a kinetic sculpture with hundreds of gold sequins. The seductive aspect of the circles contrasts with the harmful nature of the grid that supports it: they are bird spikes, an architectural device whose original function is to prevent those animals from landing on windowsills. Rodrigo Matheus incorporates this in his work, but also subverts it. In a text published in the artist's book (Cobogó, 2018), Kiki Mazzucchelli writes: “One of the most evident operations in the artist’s methodology is a neutralization of the objects’ original functions. Although immediately recognizable, they no longer possess any use whatsoever within the context into which they find themselves inserted, in a movement of forced obsolescence that underscores their aesthetic and narrative potential. Loss of functionality is thus added to the proximity or combination of disparate elements, resulting in compositions that suggest an incomplete, non-linear narrative of sorts that allows for countless points of entry and exit, as if each object corresponded to a simultaneously familiar and undecipherable language.”
Rodrigo Matheus explores the modular structure of the spikes in other works of the exhibition. In Margem [Margin] the material supports a tangle of woollen yarn, while the landscape of Janela [Window] is created with coloured cotton screens. The presence of the twigs in Ascensão [Ascension], in turn, contrasts with the triangular composition of the spikes, drawing organic lines in the space.
In an analogous way, Cortina [Curtain] and Arco [Arch] have heavy concrete spheres – also used as an architectural barrier, this material is used in public and private squares to delimit the movement of people. In these works, however, it becomes the basis of self-supporting structures with added voile, zipper and feather arrangements.
Rodrigo Matheus was born in São Paulo in 1974 and currently lives and works in Paris. Among his recent solo exhibitions are: Soft Spectacle, Ibid Gallery (Los Angeles, 2017); Ornament and Crime, Galerie Nathalie Obadia (Brussels, 2016); Do Rio e para é to Rio and from, Galeria Silvia Cintra + Box 4 (Rio de Janeiro, 2014); Collision of Real Dreams in Parallel Universes, Manuel António da Mota Foundation (Porto, 2013). His participation in group shows include: Fade in 2: Ext. Modernist Home – Night, Museum of Contemporary Art (Belgrade, 2017); Fade in: Int. Art Gallery – Day, Swiss Institute Contemporary Art (New York, 2016); Museum On/Off, Center Pompidou (Paris, 2016); What separates us, Brazil Room, the Embassy of Brazil (London, 2016); Le parfait flâneur, Palais de Tokyo hors les mûrs, Halle Girard (Lyon, 2015); 3. Bienal da Bahia, MAM Bahia (Salvador, 2014); Imagine Brazil, Astrup Fearnley Museet (Oslo, 2013); 32. Panorama da Arte Brasileira, MAM SP (São Paulo, 2011). His work is present in important collections; such as Instituto Inhotim (Brumadinho), MAM (Rio de Janeiro), MAM (São Paulo) and Pinacoteca do Estado (São Paulo).