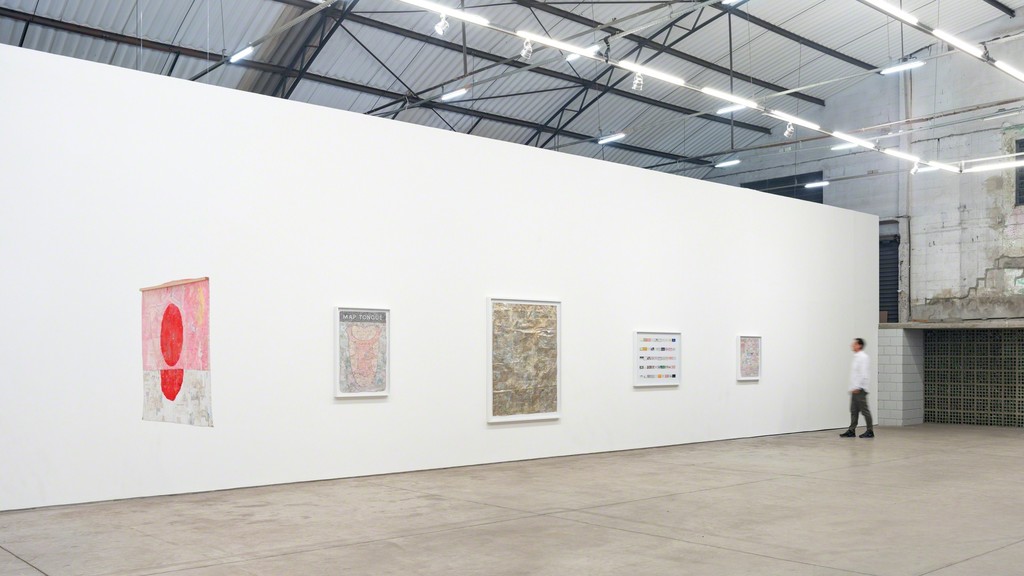 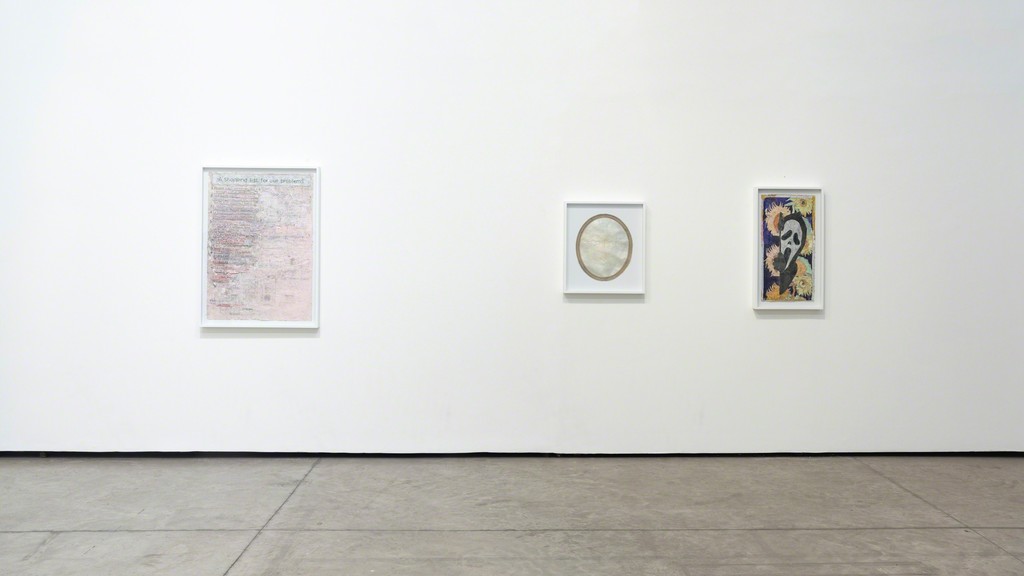 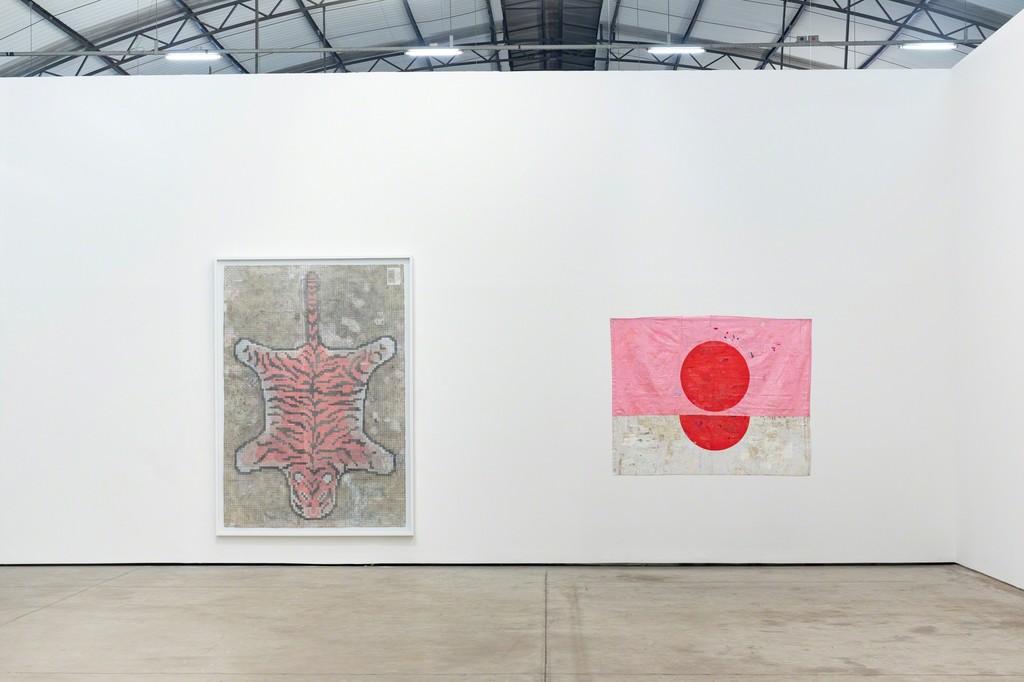 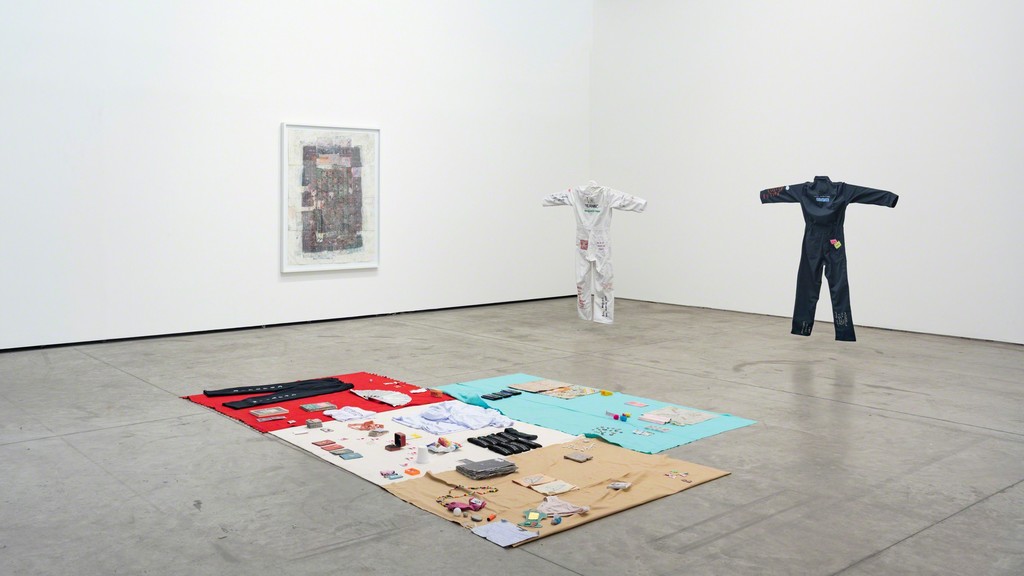 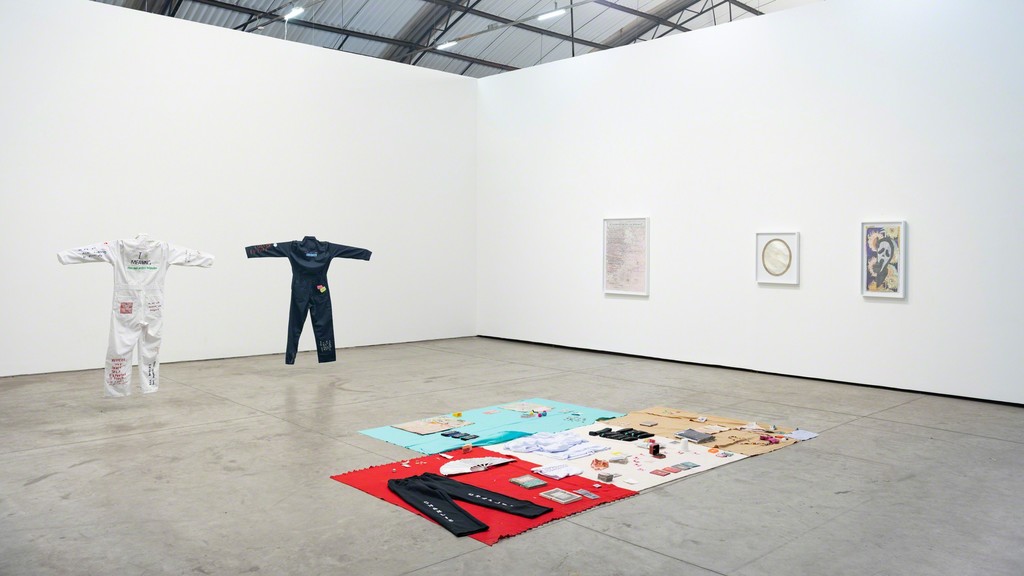 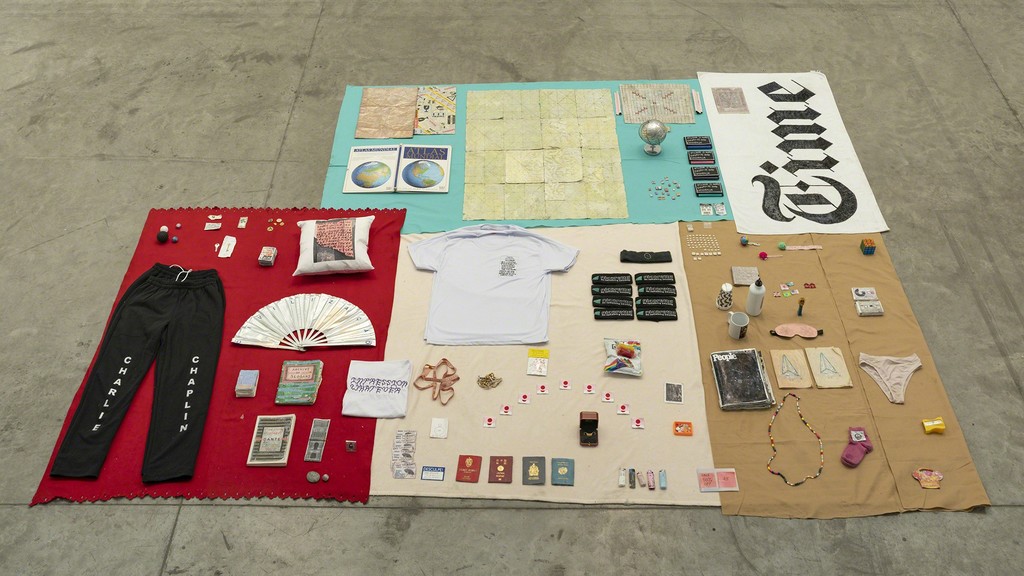 Fortes D’Aloia & Gabriel | Galpão is pleased to present Shopping Chão, third solo show in Brazil by collaborative duo Simon Evans™, formed by British Simon Evans and North American Sarah Lannan. The 12 new works articulate a unique language which unfolds into objects, clothes, flags, rugs and collages made with fragments of paper and images. The use of textual language serves a particular purpose in the pieces by collecting scraps from daily life, from studio work and from cities they visit. Personal and fictional narratives alternate between mapping, listing and taxonomies, and design a complex practice of visual and written freedom.
Shopping Chão, installation which names the exhibition, is inspired by informal street markets from Rio de Janeiro, where the duo has been living for the past three months. This commercial practice – that could be translated as Ground Mall – consists in a piece of fabric laid on the sidewalk displaying objects from various natures, frequently found in the trash, to be resold for cheap. The work is made from a mix of (both manufactured and ready-made) accessories, notebooks, magazines, and pieces of clothing, assembling a kind of personal inventory at the same time it maps the tastes and interests of others.
Another Another Prayer Rug, the Continuing Story of Bungalow Bill subverts and tightens the relationship between decorative items and religious objects when they draw a huge picture of a tiger on the base of an old dollhouse, evoking the famous print of Tibetan meditation rugs. Rituals, however, operates in a similar process when it dismantles the usual print pattern of a Muslim tapestry. Map Tongue One takes a scathing tone to label the tasting areas of the tongue with status quo defiant statements.
The subversion of the functionality of things is manifested in Darling, which flirts with abstract patterns when it evokes a blurred mirror from an elaborate composition in which silver and gold leaves are overlaid. Mirror, however, which occupies the next room, grasps on psychoanalysis when it inscribes the word “noise” in a tiny opaque mirror. In Drape Yourself in Vague Symbols and Myths, the duo take a critical look at tag lines and logos used by clothing brands when embroidering the back of two boiler suits with provocative statements in various typologies – the interest in graphic design is evident in many pieces from the exhibition. In Made up Letters, for instance, the text verges on literature once it weaves dozens of tiny letters that outline imaginary dialogues with various recipients.
Archive of Slogans for Jac highlights the importance of collecting daily materials once it lines up 50 business cards in an affectionate reference to artist Jac Leirner's work. Here, the cards are displayed with scrawled and altered images and texts, making way for an inventive and authorial writing. Shopping List for Our Problems, reveals a list of personal problems from the couple, letting their private narratives echo the universality of contemporary world issues.
Simon Evans™ is the artistic collaboration between Simon Evans (London, 1972) and Sarah Lannan (Phoenix, 1984). Both artists live and work in New York. Among their solo exhibitions, the following stand out: Not Not Knocking On Heaven’s Door, Palais de Tokyo (Paris, France, 2016); Only Words Eaten By Experience, MOCA Cleveland (Cleveland, USA, 2013); First We Make the Rules, Then We Break the Rules (Simon Evans & Öyvind Fahlström), Kunsthalle Düsseldorf (Düsseldorf, Germany, 2012) and Kunsthal Charlottenborg (Copenhagen, Denmark, 2012); How to Be Alone When You Live with Someone, MUDAM (Luxembourg, 2012); How to get about, Aspen Art Museum (Aspen, USA, 2005). Their participations in international group shows include the following Biennials: 12th Istambul Biennial (Turkey, 2011); 31st Panorama da Arte Brasileira, MAM (São Paulo, 2009); 27th São Paulo Biennial (2006); California Biennial, OCMA (Newport Beach, USA, 2004). Their work is featured in many important collections from museums such as the Aspen Art Museum (Aspen, USA), CIFO (Miami, USA), Louisiana Museum of Modern Art (Humlebaek, Denmark), Miami Art Museum (Miami, USA), MUDAM (Luxembourg), Philadelphia Museum of Art (Philadelphia, USA), SFMOMA (San Francisco, USA), among others.