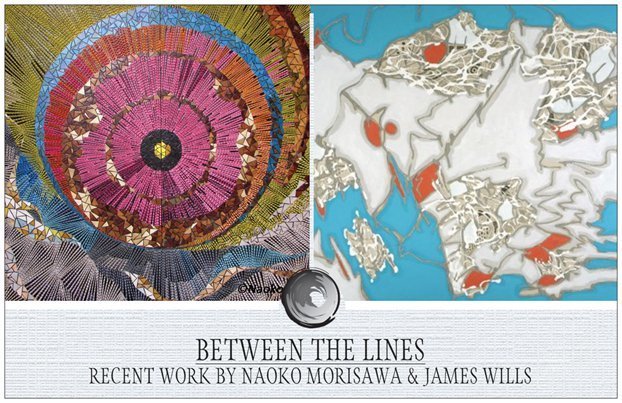 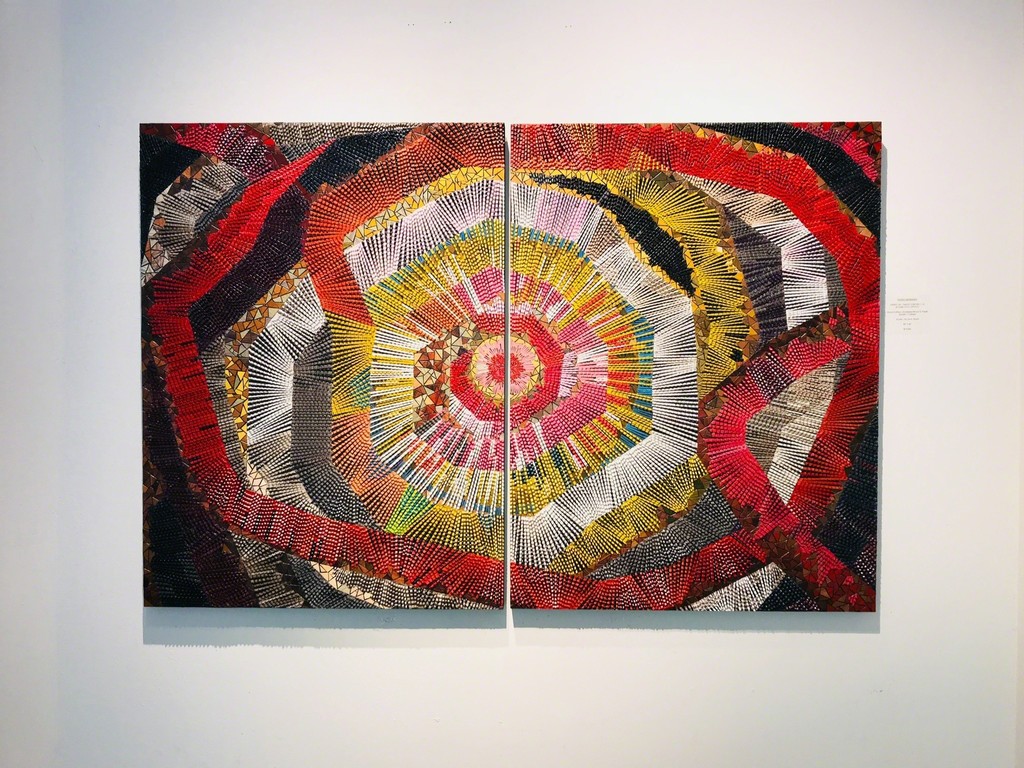 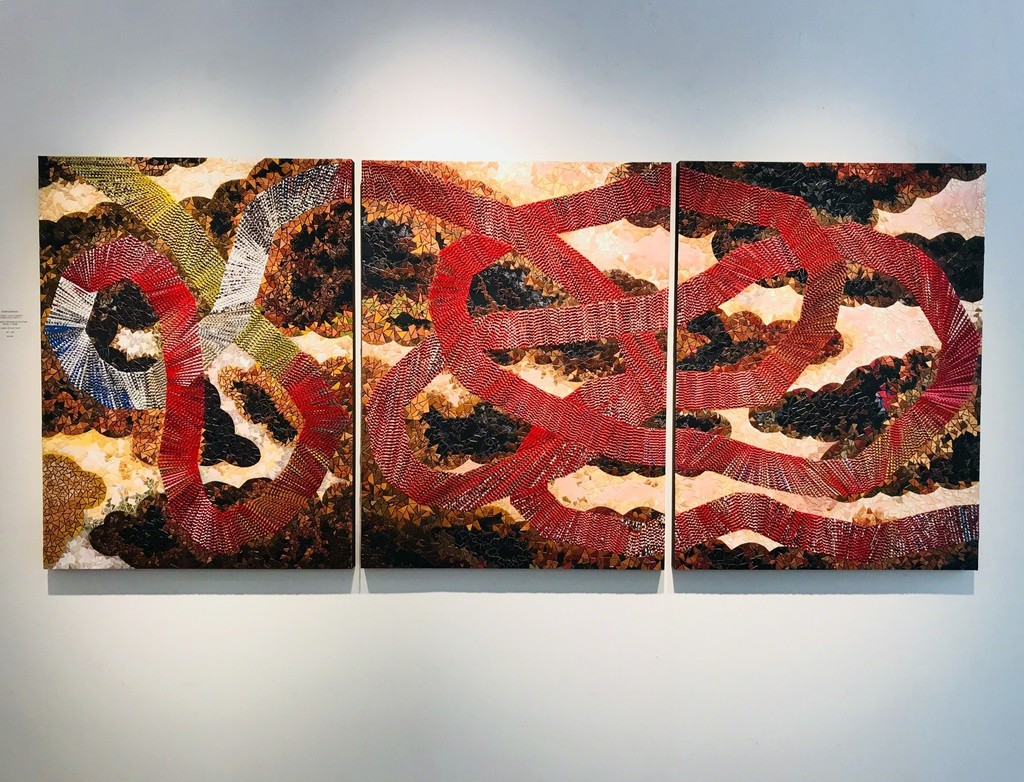 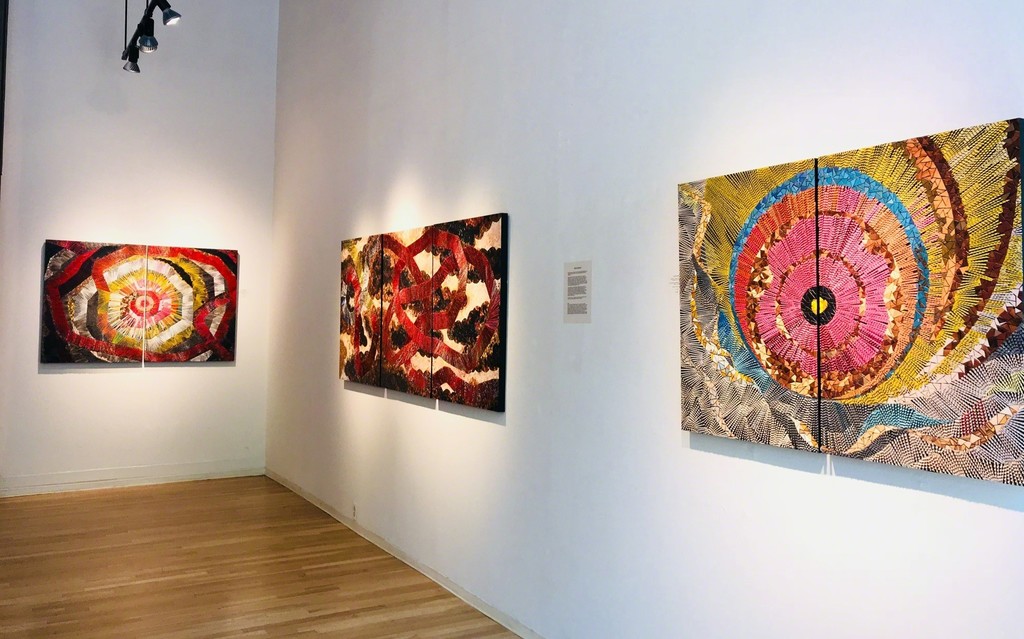 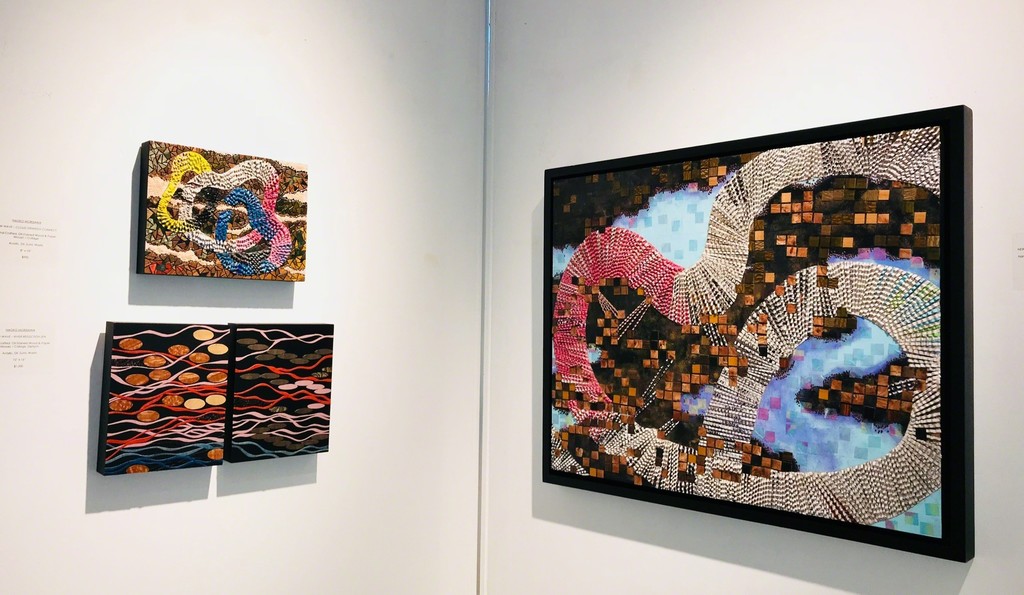 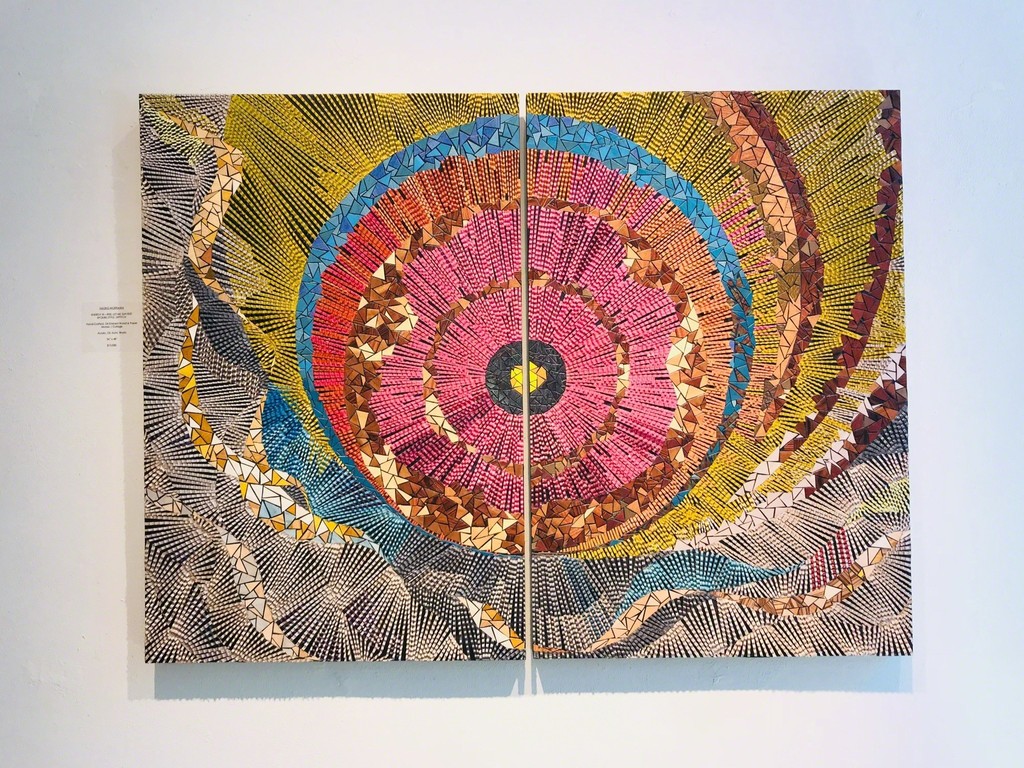 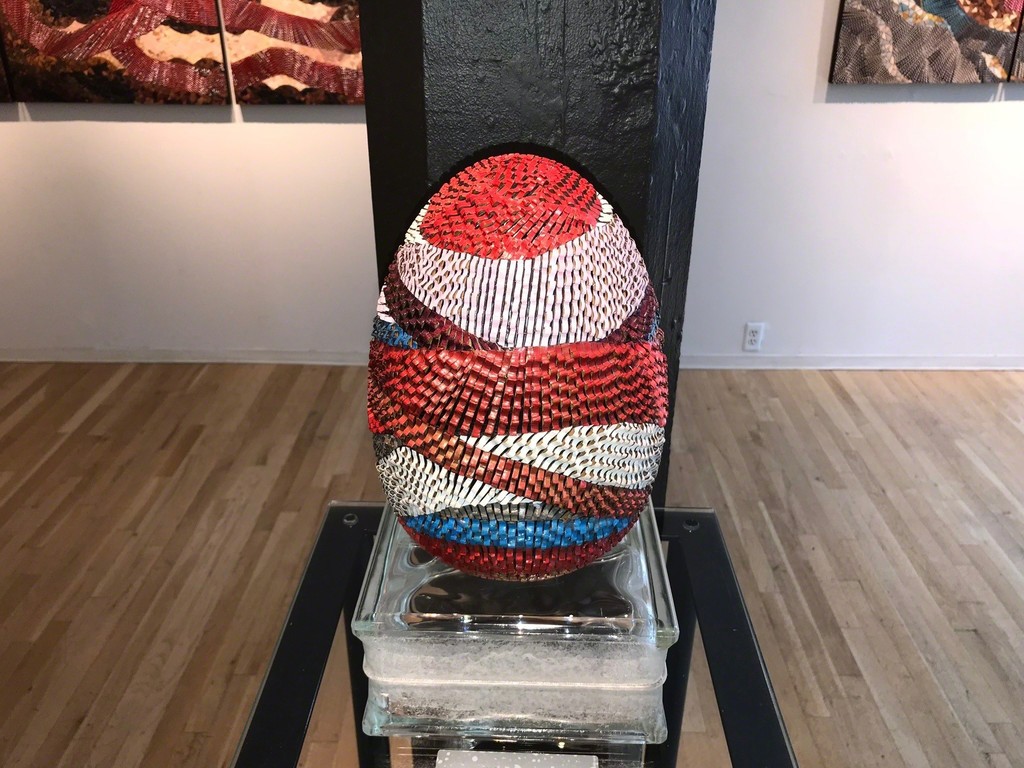 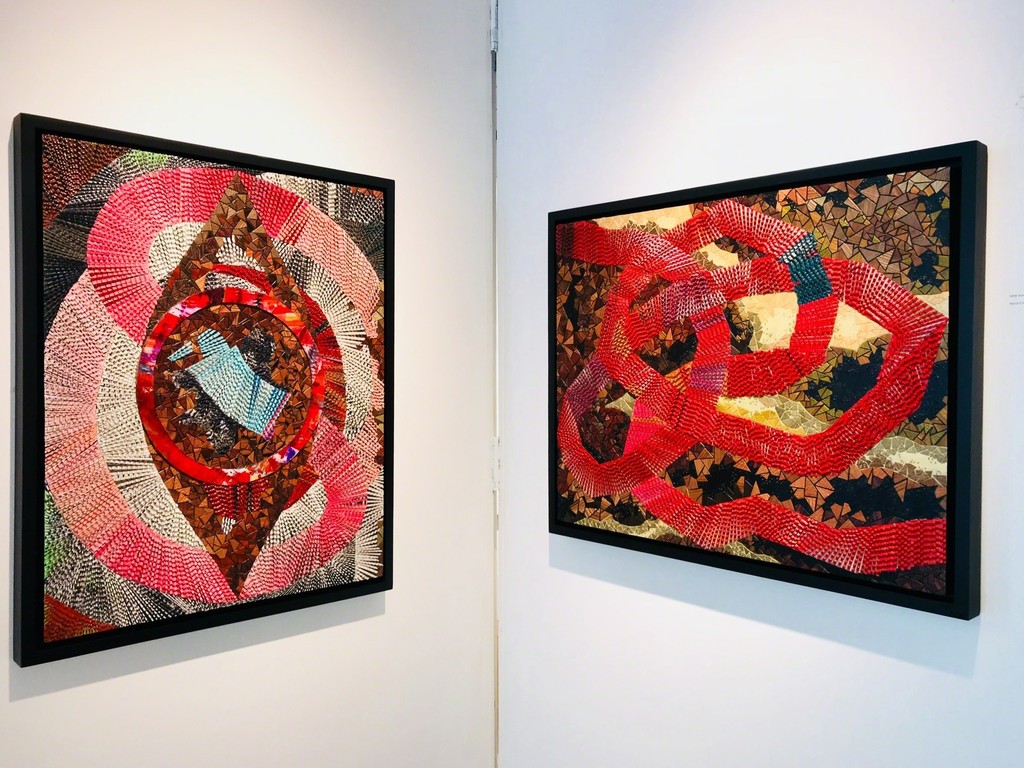 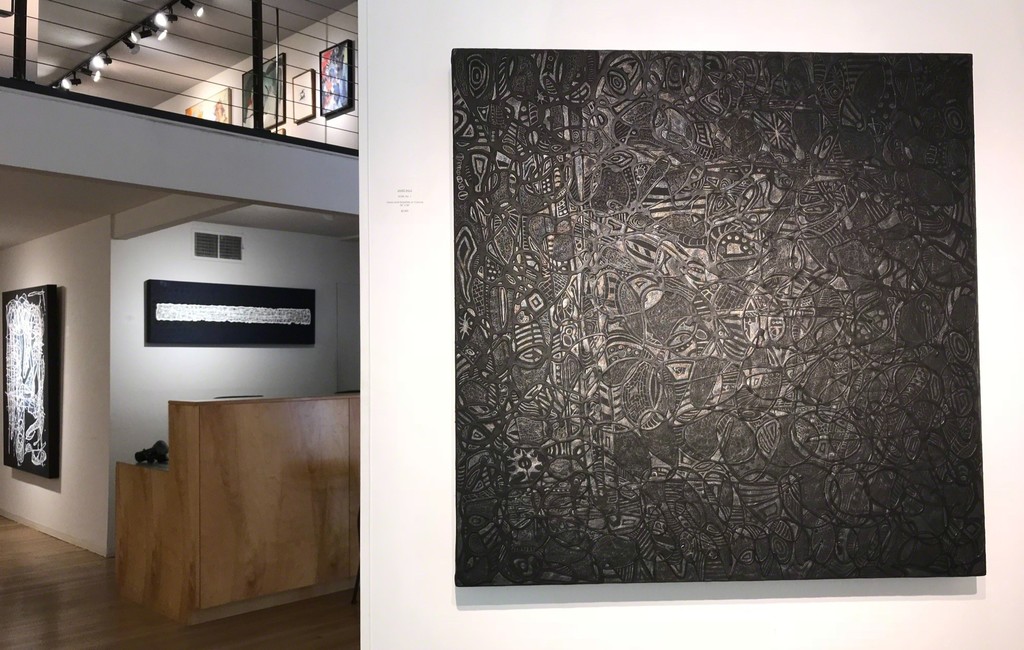 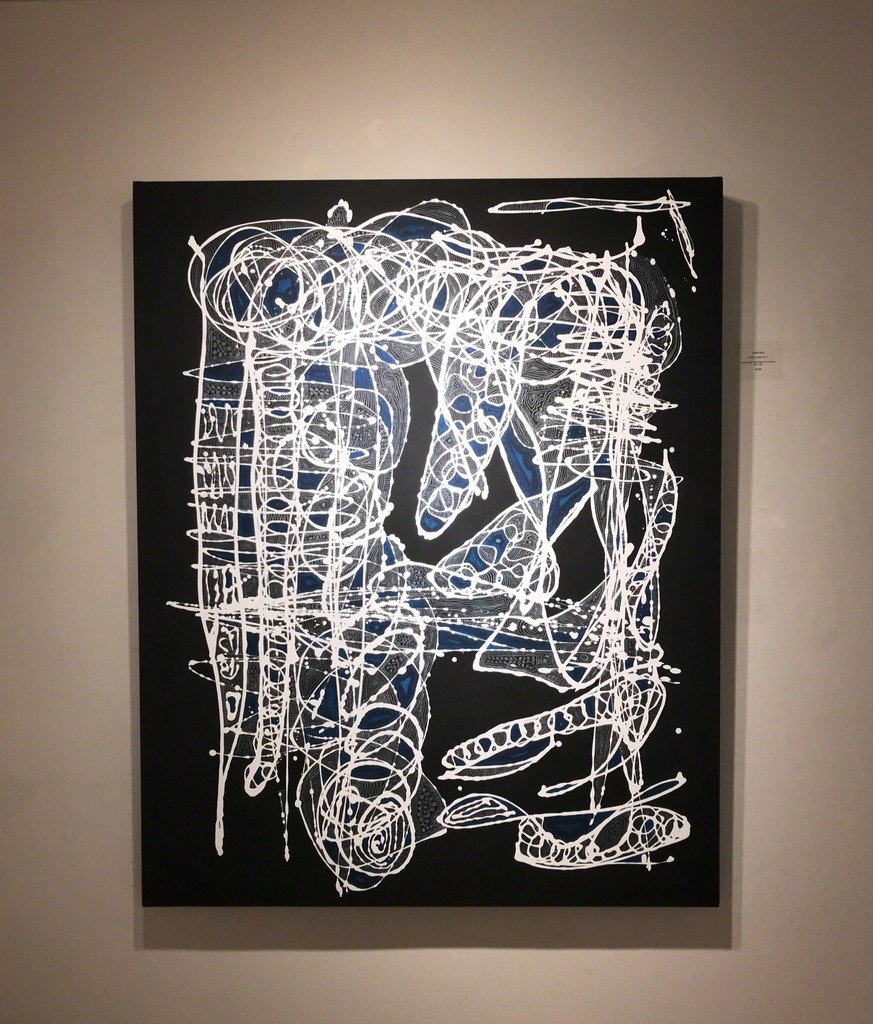 BETWEEN THE LINES, explores the critical kineticism of line as expressed in recent abstract work by two distinctively different artists,
of different cultural origins, experiences, and gender, practicing in distinctively different mediums. And yet their work enjoys a strikingly similar foundation of discipline, skilled use of design elements, expressed with an observably exuberant spirit.
Naoko Morisawa, well known and respected in the Pacific Northwest, is of Japanese origin and divides her time between Seattle and Tokyo, her birthplace.
James Wills is a native of the Pacific Northwest and has lived in Arizona, Oregon, and Great Britain. He currently resides on Whidbey Island.
Morisawa received her BA in Design and Ceramics from Tama Art University, Tokyo. Her wood mosaics are contemporary updates of the traditional art of Japanese wood mosaic, yosegi, popular in Japan’s
Edo Period (1615-1868). Drawing inspiration from this ancient cultural history, her hand-crafted mosaics - meticulously composed of hand cut wood and/or paper, and stained in brilliant, complimentary hues - reflect the spirit of Edo Japonism; Noh and Kabuki theatre; ukiyo-e; the traditions of Kimono design; and reverence for nature. Morisawa, who also taught art in Tokyo and Yokohama, has created several public, site-specific installations throughout the Puget Sound region, has been featured in numerous juried national and international gallery exhibitions, won dozens of awards and honors, and was selected for The Dublin Biennial Exhibition of Contemporary Art, Dublin, Ireland. She included in the Women’s Invitational Exhibition 2017, at The Eisemann Center of Performing and Visual Arts in Richardson, TX.
Morisawa states her work is "...like a diary. Each piece is created with the care one would use writing a letter to a loved one or friend."
Wills, working predominantly in acrylic and pencil on canvas, studied painting under highly respected Northwest artist, the late Frank Okada (1931-2000) - who himself was influenced by the East Coast Abstract Expressionists as well as the “Pacific Northwest Mystics” like Mark Tobey –
at Oregon University where he graduated with his BA. His work was also deeply influenced by his professional relationships with Northwest masters, Mary Henry (1913-2009) and Francis Celentano (1928-2016). Employing intuitive automatism, Wills’ line is often gestural, sinuous, and calligraphic
in nature. His eye is drawn to both the macro and micro in his observations of the world around him. His paintings have been featured in numerous group and solo exhibitions in the Puget Sound region, Southern California, and in The Netherlands.
Wills states that his work is about the “...exploration of ideas and the magic of that idea’s visual performance.”