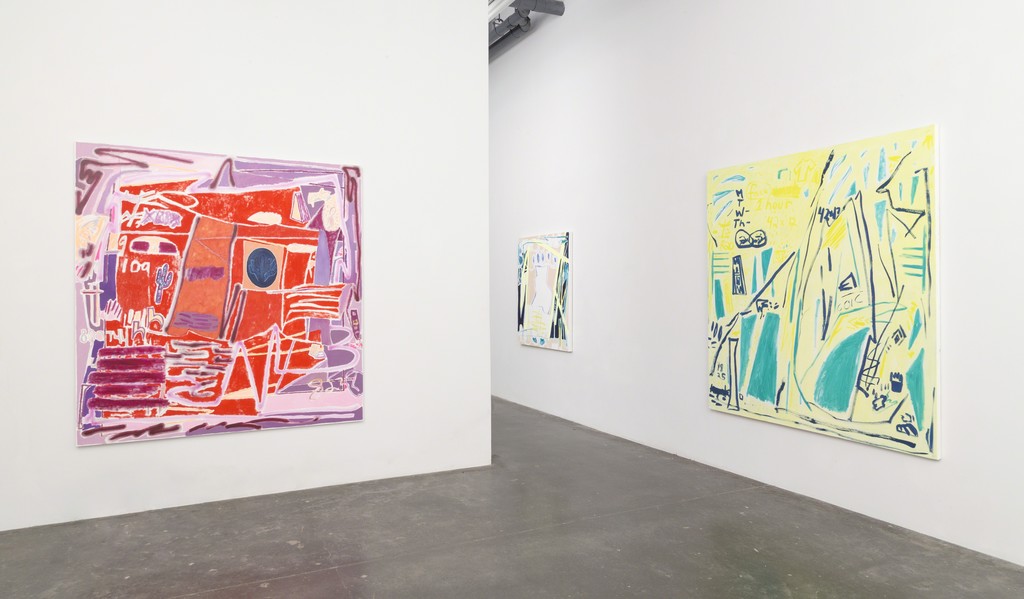 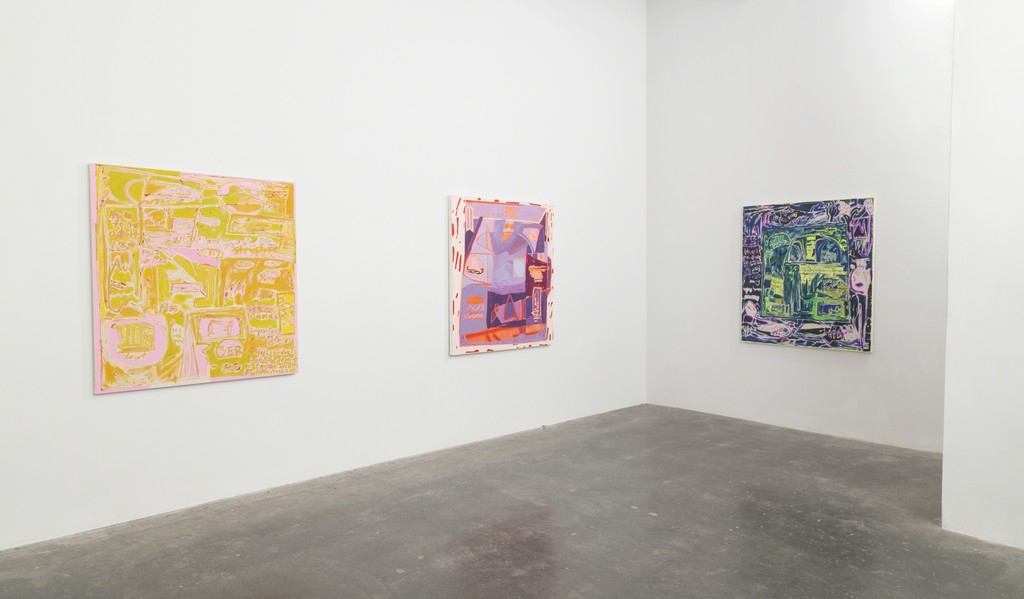 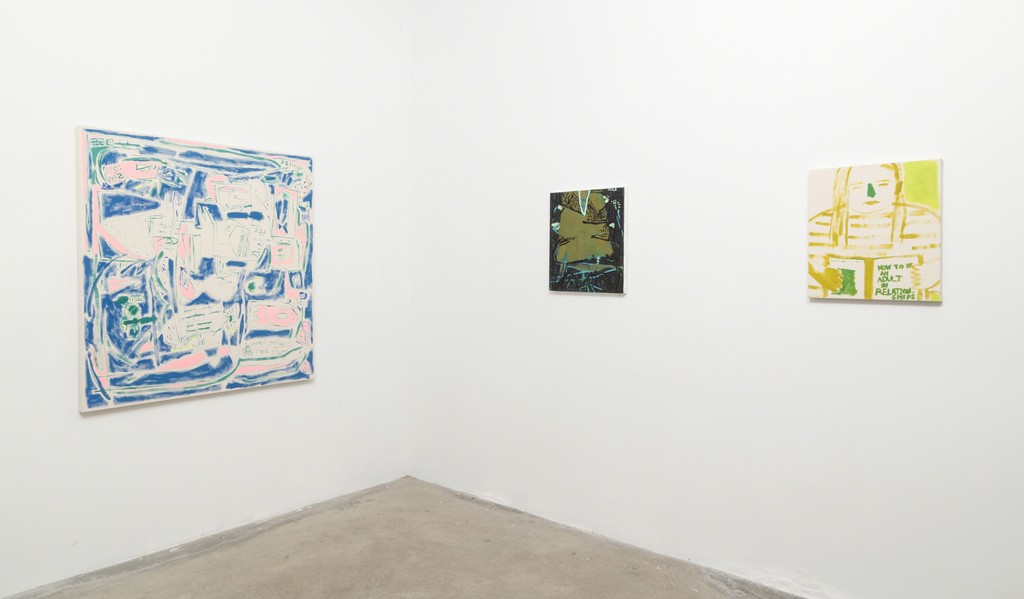 For her debut solo exhibition at Freight + Volume (and in New York City), Margaux Ogden has embarked on a voyage. Down The Rabbit Hole presents a new body of work for Ogden, in which she traverses unknown territory – like Alice in Through the Looking Glass – and discovers some wonderful new vistas along the way. Her new paintings are an adventure in abstraction: somewhat of a cross between Joan Snyder and William T. Wiley, the work maps out a brand new personal vocabulary for Ogden, with hieroglyphic gesture and spontaneous symbol and color which she claims very much her own. The following is an interview between Craig Drennen, Assistant Professor of Drawing/Painting at Georgia State University, and Margaux Ogden, which took place recently in Brooklyn.

Craig Drennen: I first came to know Maggie Ogden’s work in Maine in 2011 at the Skowhegan School of Painting & Sculpture. My subsequent visits to her Boston studio kept me intrigued by the direction of her work. She is now based in Brooklyn and on the occasion of her first solo exhibition at Freight & Volume she agreed to this conversation.

CD: The paintings in this exhibition seem to be a significant departure from the pieces I saw in your studio back in 2012. Do you agree?

Margaux Ogden: I do agree. Maybe they were more self-conscious back then. I have always been interested in the difference between incidental mark making and intentional mark making and how those come together in a painting. What the hand does when you’re thinking about painting versus what the hand does when you’re not thinking about painting. I got to a point where I was willing to include anything, whether it was a stream of consciousness scribble on a notepad, a face, a word, a cactus - anything. I wanted to embarrass myself a little and the more uncomfortable I felt, the better.

CD: Can you expand on why drawing seems so important in these new pieces?

MO: I have always been interested in the relationship between drawing and painting but they previously seemed really disparate for me personally. You are right though, drawing is really important in these new pieces. I wanted to treat the paint more like a drawing tool than I previously had. Drawing has always felt more private so maybe it was another way for me to make the work more personal.

MO: In terms of my personal rules, it definitely feels that way. Once I entered that world of painting it was kind of magical. Painting itself can be an out of body experience. Nothing feels off-limits and that excites me. I was allowing myself to include whatever I wanted in the work. Using text and representation allowed me to bring a more personal narrative into the work. I finally realized that it didn't have to be one or the other with representation and abstraction. It was really liberating for me. I had set up these rigid parameters of what I thought a painting was and with these new pieces I was able to just forget about all of that.
CD: These pieces seem performative as well, but not in the classic manner of performance art.

MO: I watch a lot of stand up comedy. I think that it is because of comedy that I have started adding the personal narrative to my own work. I’ve started taking personal notes, scribbles, symbols, and drawings from my day-to-day life and including them in the paintings. It has allowed me to be honest and direct to the viewing audience in a way that feels new to me. That’s probably what you’re reading as performative.

CD: We now have at least one hundred full years of abstract painting behind us. Do you feel any affection for any earlier versions of abstraction?

MO: I am really interested in this provisional moment in painting and a lot of the artists affiliated with it. I like the seemingly unfinished quality, the evidence of the hand, and paying attention to when to stop. In stand up comedy it is really amazing how timing and space can change a joke. Even one word can change everything. I find painting and comedy really similar in that sense. There is a lightness and looseness in this provisional moment that gets to the essence of painting, without looking overtly laborious.

CD: What’s next in your studio?

Craig Drennen is an artist based in Atlanta, GA.

Margaux Ogden was born in Boston, MA and raised in Vermont and Coastal Massachusetts. She received a BA from Bard College in 2005, a Post-Baccalaureate in Fine Arts from Brandeis University in 2010 and an MFA in Painting from Boston University in 2012. She attended Skowhegan School of Painting and Sculpture in 2011 and most recently participated in DNA Residency in Provincetown, MA in September.