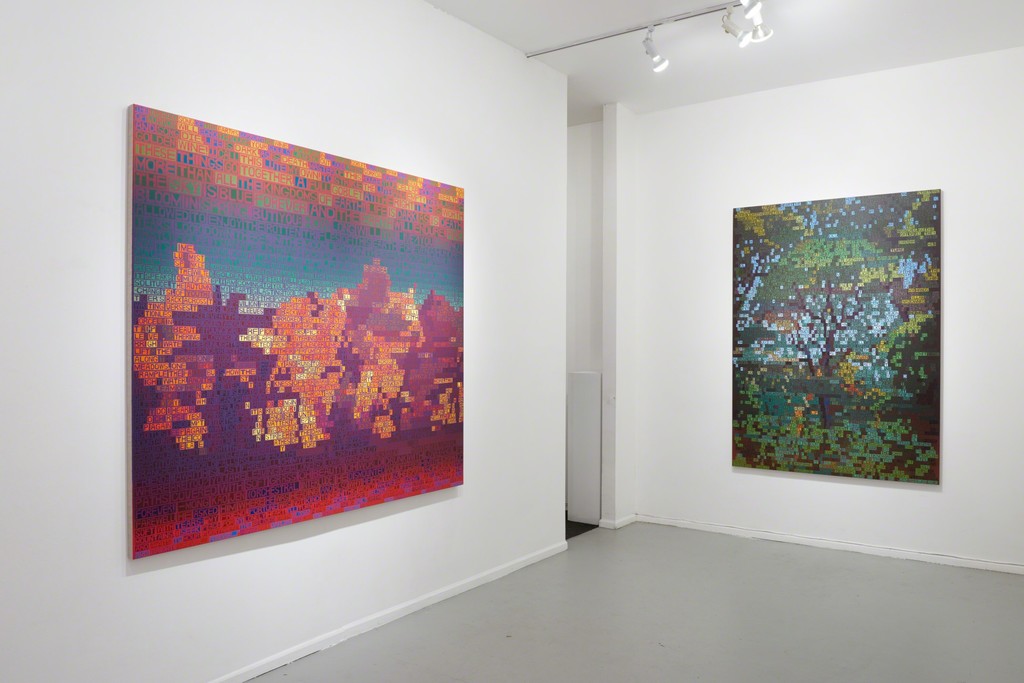 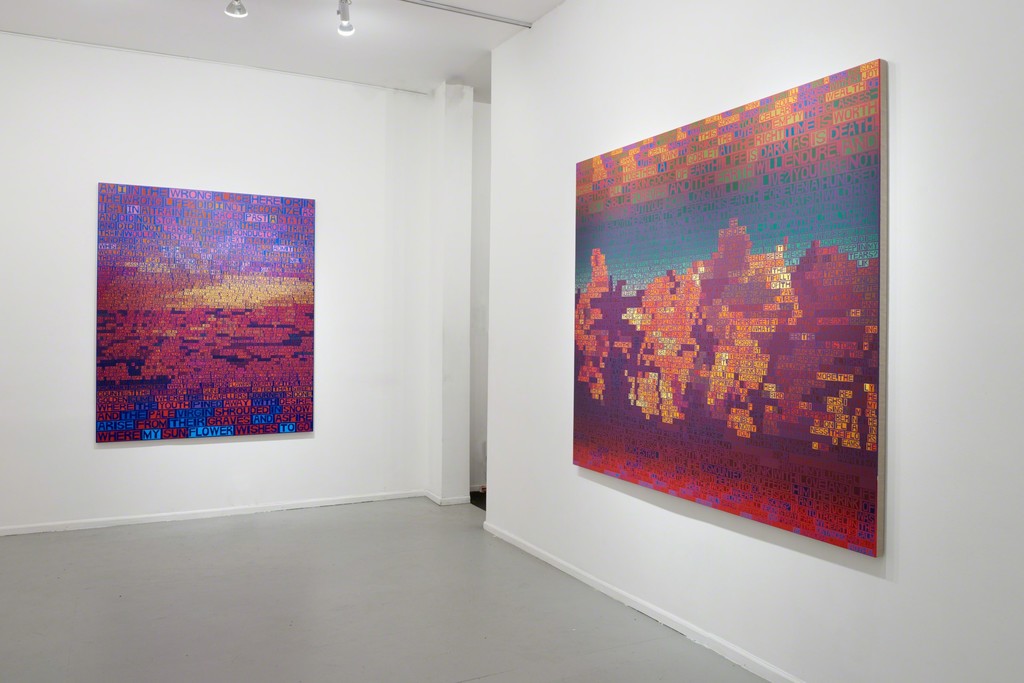 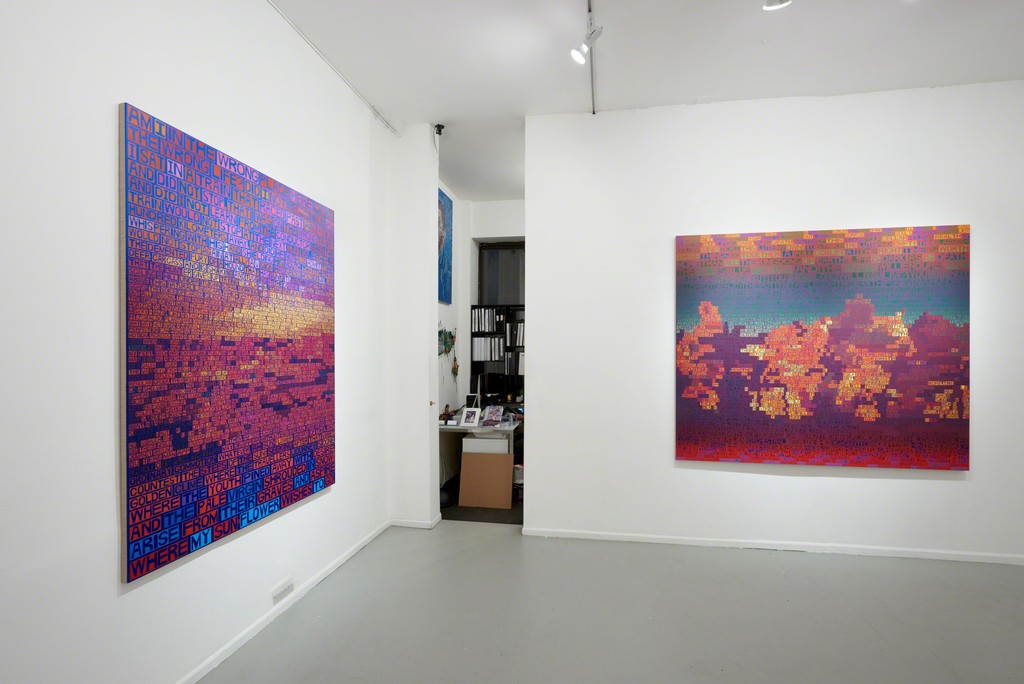 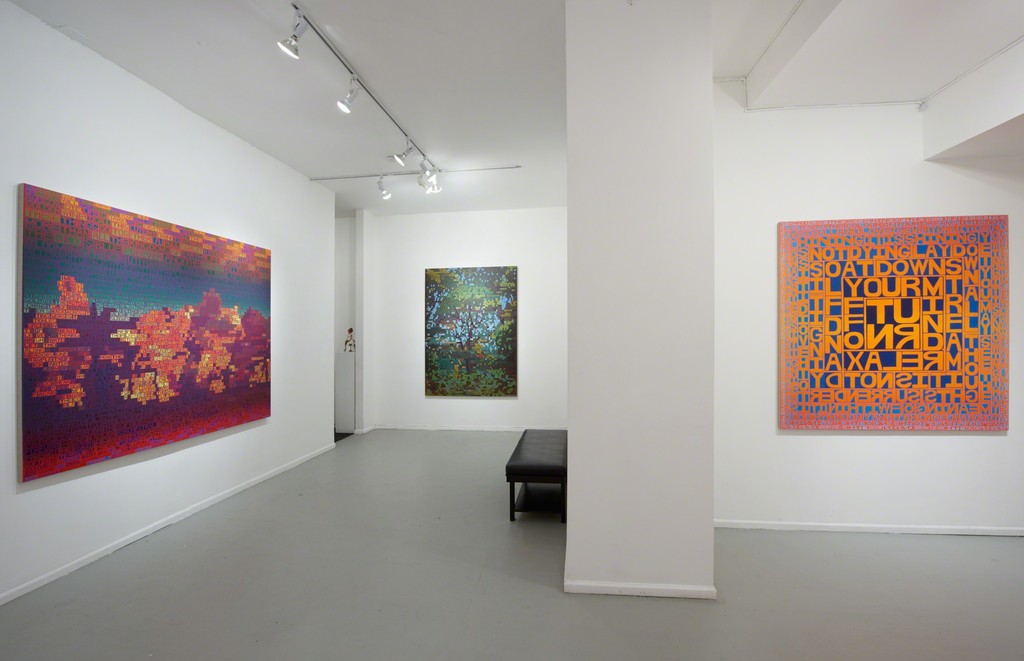 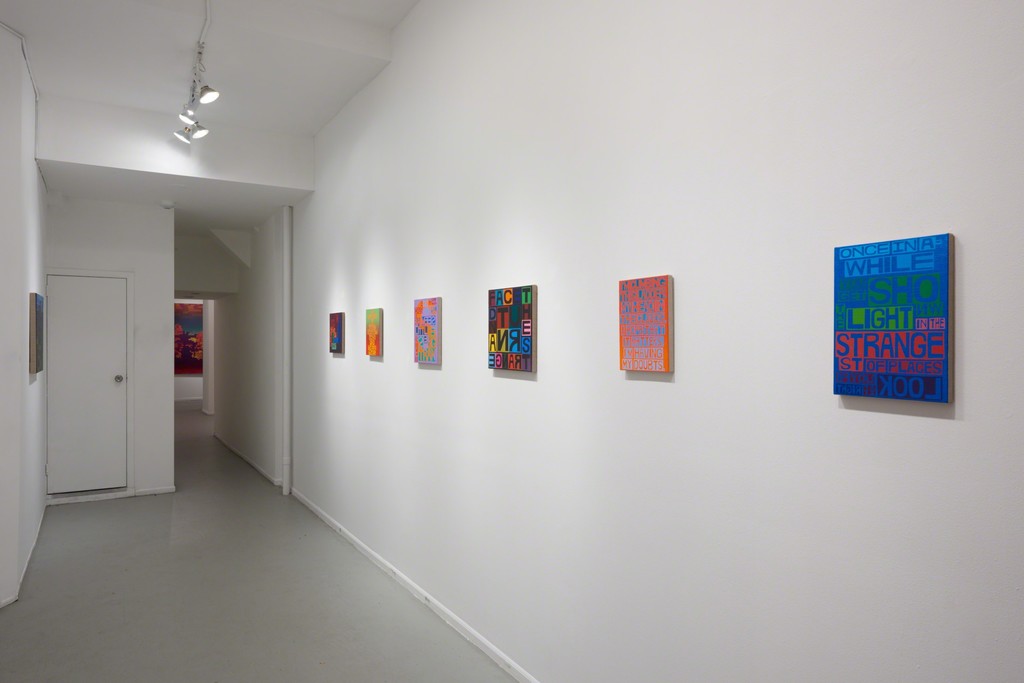 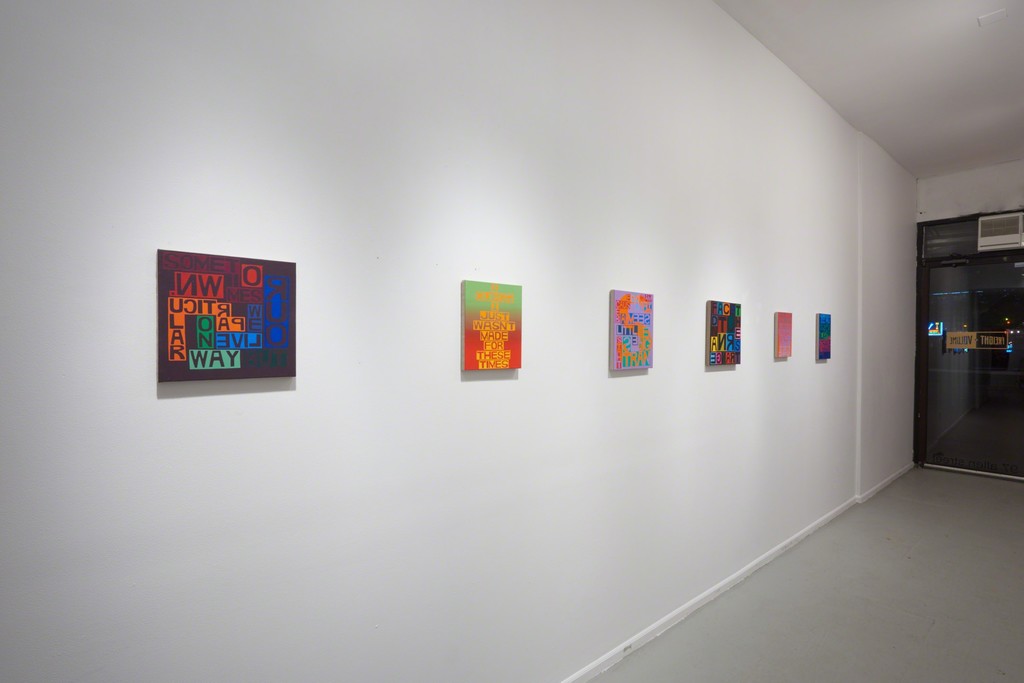 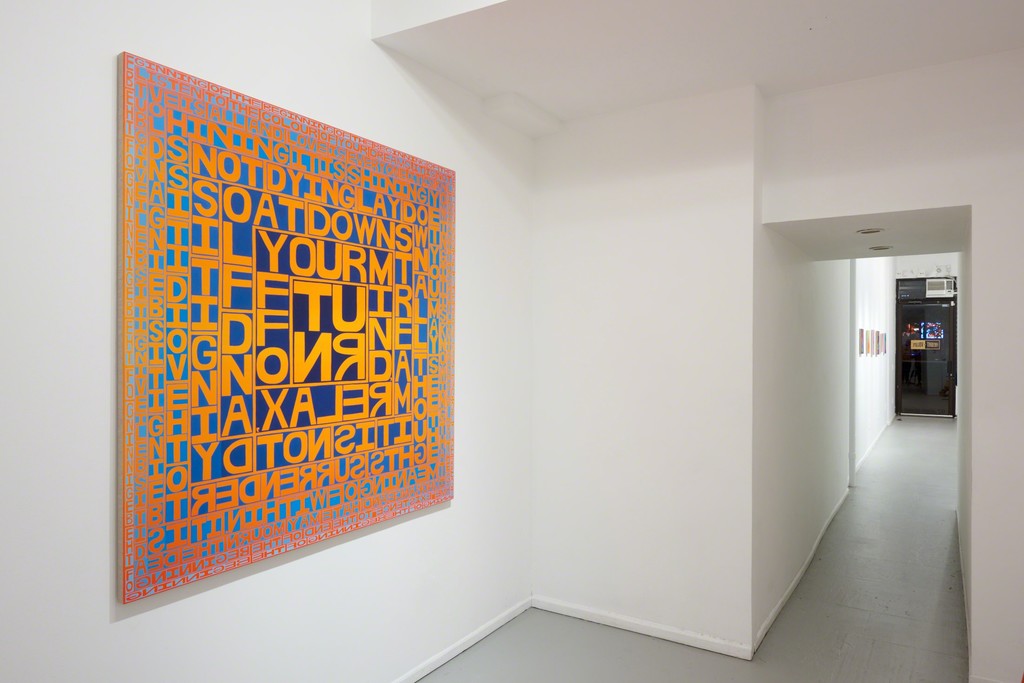 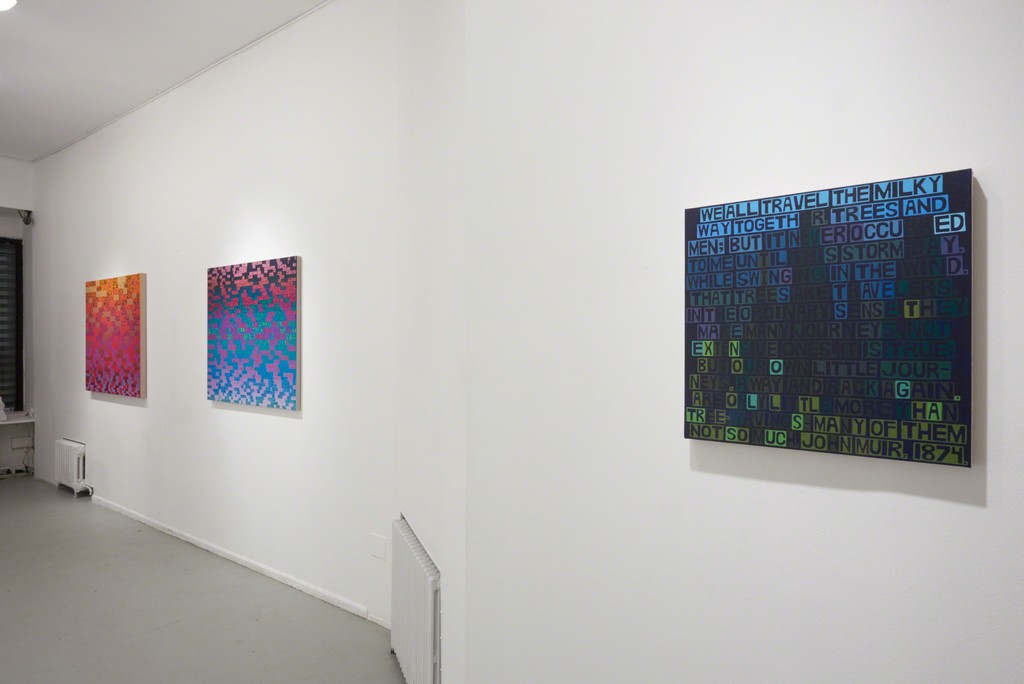 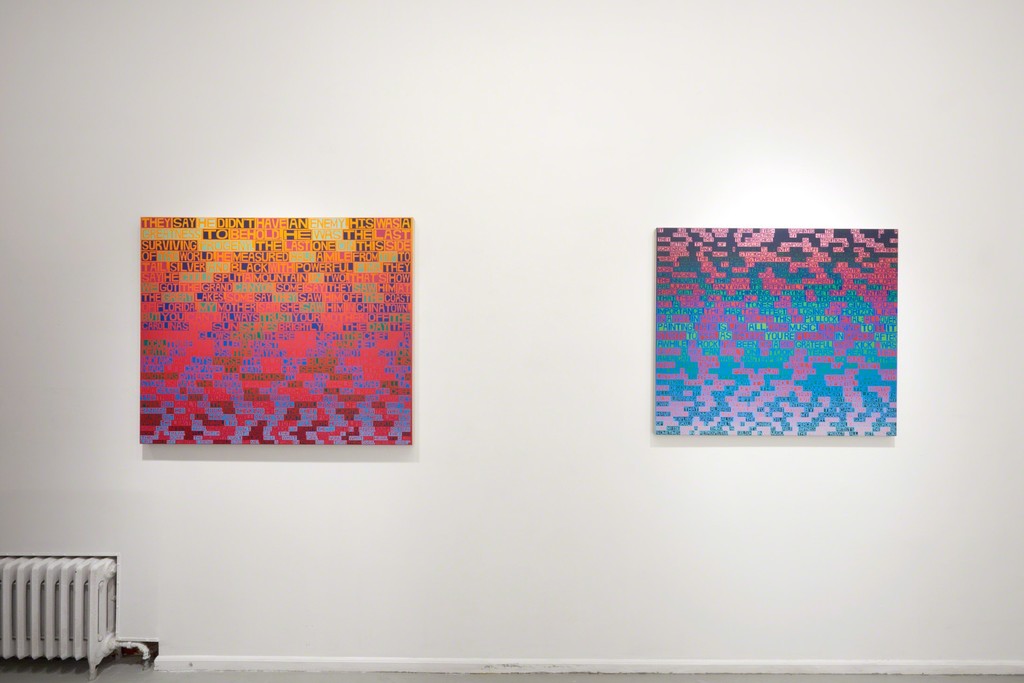 FOR IMMEDIATE RELEASE: ERIK DEN BREEJEN, SONG OF THE EARTHOctober 27th – December 4th, 2016
Opening reception Thursday, October 27th, 7pm - 10pm Freight+Volume is pleased to present Erik den Breejen's new solo exhibition, Song of the Earth. The paintings in this exhibition showcase den Breejen's characteristic text-based painting technique, applied to the representation of a deeply nuanced personal vision of nature, sensory experience, and their myriad intersections. In his most recent body of work, den Breejen shifts his focus from music to landscape and the natural world. Venturing away from his last exhibition at Freight + Volume, There's a Riot Goin’On, a self-described "rogue's gallery" of musical and cultural icons of the 1970's, Song of the Earth shows the artist honing a complex synthesis of influences involving poetry and song lyrics to experience and memory. Den Breejen's artistic approach is particularly well suited to this endeavor; his mosaic-like technique, in which individual words are enclosed by rectangles of complimentary colors, breaks up the rigidity of the text and gives a degree of freedom and variability to its meaning. This invites the viewer to interrogate and reinterpret the text, and the snatches of found poetry that inevitably spring from the patterning of words adds a new dimension of spectatorship to the artist's work. In den Breejen's work, the tension between painting and the written word is dissolved, and the two instead function harmoniously and synergistically to create an engaging viewing experience. The paintings on display reflect a diverse patchwork of influences and inspirations, though den Breejen leaves the threads loose enough for the viewer to form their own understandings, keeping with his longing to create a Dzsuggestive, not overly determineddz viewing experience. Layers of meaning lurk deep beneath the surface, especially in the case of the title piece. Ostensibly a bucolic scene of fall foliage, the painting is in fact based upon a still from the film Apocalypse Now that shows an area of jungle being napalmed. The text of the painting is an English translation of the lyrics to Mahler’s Das Lied von der Erde (The Song of the Earth), which are a selection of poet Hans Bethge's German renderings of ancient Chinese poetry. This text contrasts sharply with the image of a burning, bombed jungle, a juxtaposition that both provokes thought and invites the viewer into an intellectual engagement. Forest Interior, based on the artist's own photograph of unspoiled wilderness on Shelter Island, also enlists the natural world as a catalyst for meaning and text-image dialogue, though in an altogether different manner. Destruction gives way to tranquility, and the text, comprised of quotes from Osho, Muir, and Thoreau, among others, draws focus towards natural forces and gives a
Transcendentalist air to the painting. A recreation of the site of a Dzprofound experience of multi-sensory serenity,dzForest Interior simultaneously deconstructs and extrapolates upon the event, integrating the perspectives of others into the framework of an intensely personal experience. Den Breejen's ability to unite his choice of texts with his technique is abundantly evident in his new works. In Tuning My Colors, Tuning My Eyes, a text based on the artist's own stream of consciousness writing, links such disparate subjects as his own artistic process and approach to color, the twelve-tone compositions of Alban Berg and Arnold Schoenberg, and the music of Bob Dylan and the Grateful Dead. Inspired by Sol LeWitt's use of Dzrulesdz in his painting, den Breejen's approach is algorithmic, with the goal of creating Dza scientific or systematic approach to color, one less concerned with 'taste' than the phenomenological possibilities of it.dz This serves as a visual analogy for musical composition, with color functioning as key and the arrangement of words as notes, a model particularly well suited to the twelve-tone music described in the text. In his new paintings, den Breejen is working with a remarkably complex synthesis of influences rather than paying homage or tribute to other artists. His desire to give his ideas the space to Dzferment and mutatedz and his openness to the new directions that they indicate gives his art a refreshing balance of spontaneity. He is attentive to the complexities of language, especially in the formal sense, and revels in suggesting new interpretations of his textual sources. Erik den Breejen was born in Berkeley, California in 1976. He is a graduate of Cornell University, where he received his MFA in 2006, and California College of the Arts, where he received his BFA in 1999. Recent solo exhibitions include Image, Music, Text at the Untitled Art Fair in Miami Beach (2012) and There’s a Riot Goin’ On at Freight + Volume, NYC (2014). Den Breejen has exhibited internationally, and his work is in collections throughout the world, including the Kistefos Collection in Norway. He recently completed a two-story mural of Atlantic Records founder Ahmet Ertegun, commissioned by the label for their new headquarters in New York. Den Breejen is a 2015 New York Foundation for the Arts Fellow in Painting and has completed numerous residencies including the DNA residency in Provincetown, MA. He lives and works in Brooklyn, New York. We are also pleased to announce a limited edition 18 color screenprint on Coventry Rag 290gsm that the artist has printed in collaboration with Kayrock Screenprinting Studio and Gallery, available for sale. Please join us for the opening reception with the artist on Thursday, October 27th from 7 to 10PM. Refreshments will be served. For further information, please contact [email protected], or call 212.691.7700.