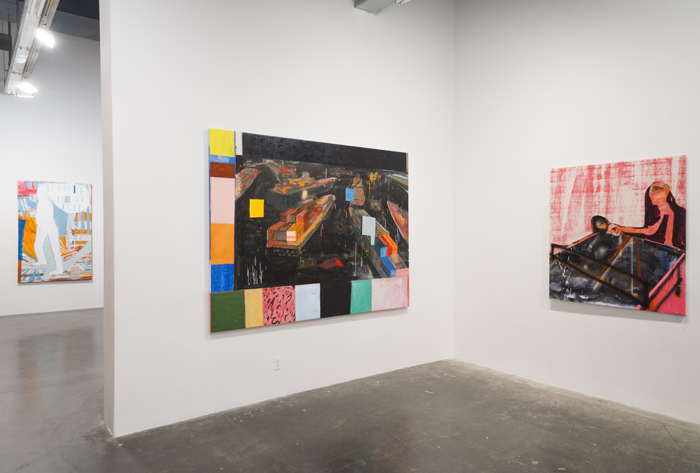 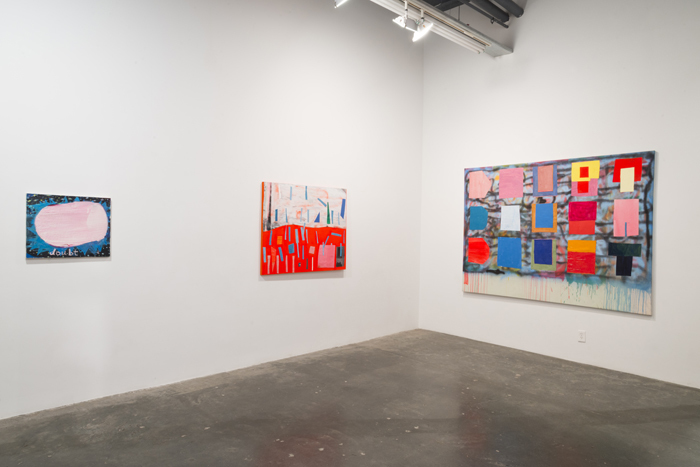 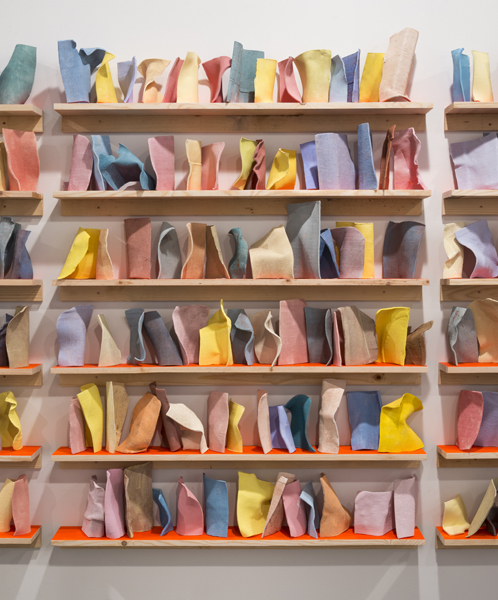 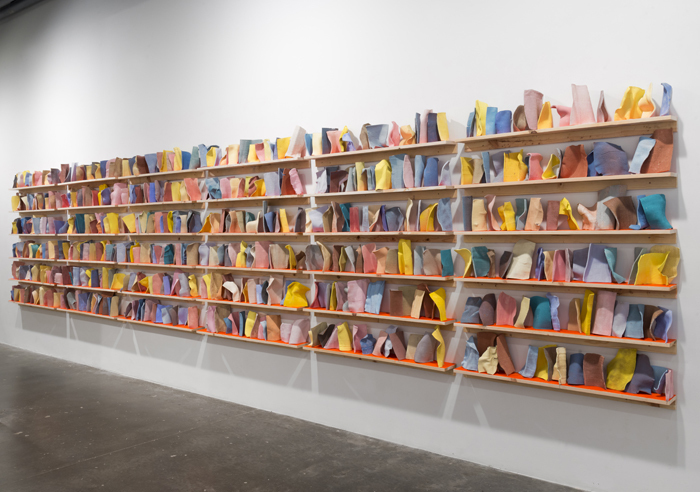 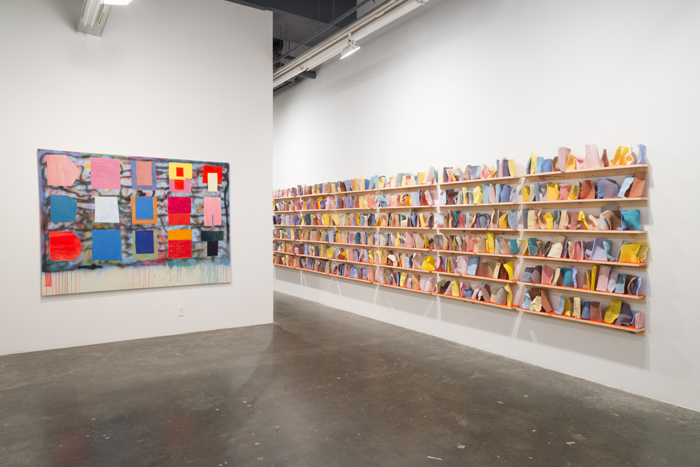 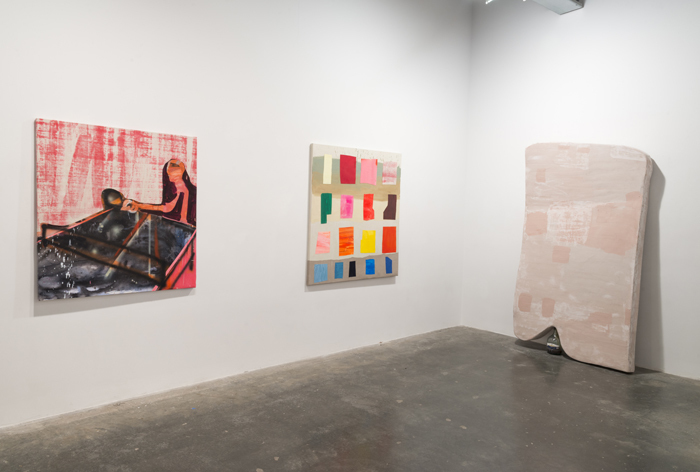 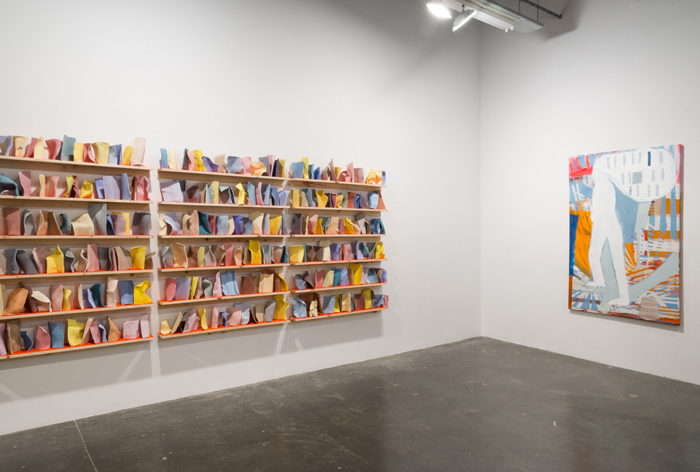 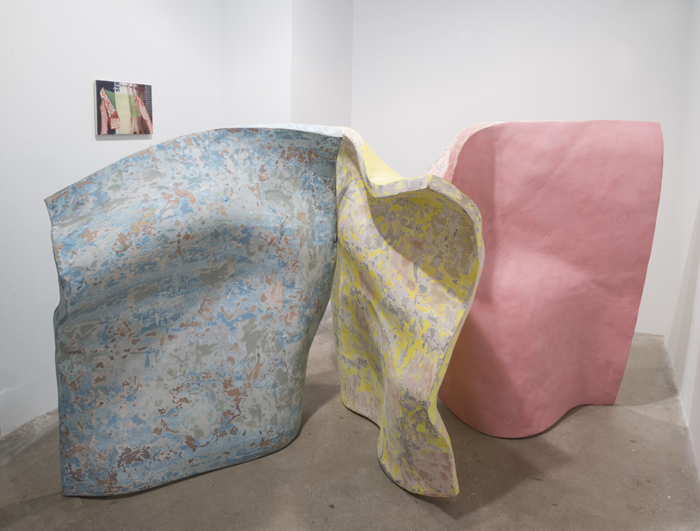 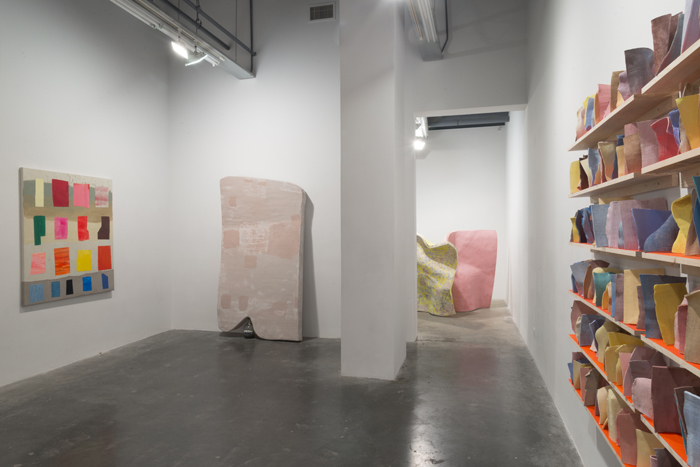 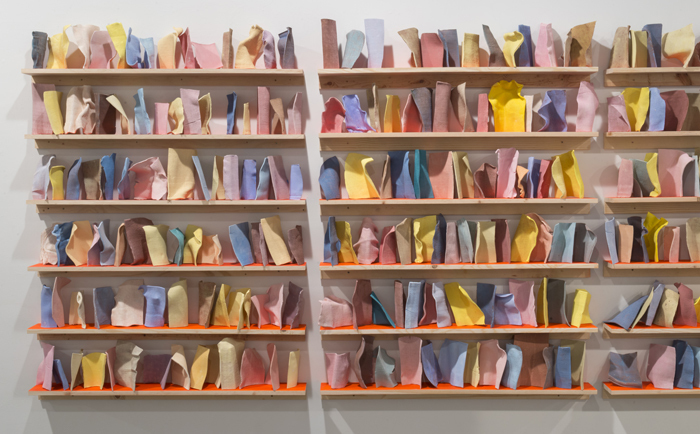 EZRA JOHNSON "It's Under the Thingy"
October 2 – November 1, 2014
FOR IMMEDIATE RELEASE:

Ezra Johnson’s art is always in motion. Whether he is creating hundreds – sometimes thousands - of individual painting stills in the animations for which is so well-known, developing a new technique of fabricating an indoor/outdoor fiberglass mattress or oversize sponge, cutting apart and reassembling a painting with industrial adhesive, or casting 500 ceramic dishcloths for his current installation, the artist is a bundle of kinetic energy and flux. Each aspect of his work feeds into the next – the video refers to the painting, which informs the sculpture, which leads back to the video, and so forth. His diverse practice encompasses every media and constantly generates new ideas and directions. It never rests. To follow Johnson’s art is to open up one’s mind to the infinite possibilities inherent in his creative process. His creativity is a moving target and this is what makes him so exciting - and surprising - as an artist.

About his animation process Johnson has written:

I am trying to make dreams real. Not just through imagery but also through different kinds of connectivity and by the transitions between images. I want to plow through space in a physical way; pushing forward into it with tactile energy. I want to go mucking from side to side with gooey, soupy paint or chunks of cut paper and objects. I like to make it physical so the viewer can feel it in a visceral way- not slick or heavily produced.

Johnson’s current solo exhibition at Freight+Volume, in keeping with his peripatetic process, is a multi-faceted display of all the artist’s dexterities in painting, sculpture and animation. His materials are as varied as the work itself – fiberglass, clay, oil, acrylic, fabric, bondo, enamel, digital media, etc. There are repeated motifs and gestures in the new paintings, which convey a sense of nervous energy and flux. They are heavily collaged, often even cut up, flipped over and then glued back together. There are also words and phrases rendered in bright colors: Triple Large Doubt and Little Doubt for example, and cut-out shapes which suggest letters, as in Arrangement for Henry. Other paintings incorporate collage in a kind of staccato, repetitive array, sometimes encased in thought bubbles, such as Walking and Thinking”.

The sponge sculptures – both in oversize and life-size scale - are inspired partly by a intimate “kitchen table sculpture” made when leaning stiffened household sponges together. Johnson re-creates these sponge forms with twisted and contorted colorful ceramic slabs, which have been glazed, fired and placed on a series of gallery-length shelves, as well as an indoor/outdoor version of three giant sponges in six foot proportions (Der, Die, Das). The artist believes when seen together these sponges form a tender and humorous statement about human effort. Echoing this form in another room is an oversize mattress fashioned from resin, bondo and wood and balanced on a wine jug, undulating and bending with a playful reference to painting’s rectangular format, as well as an homage to Serra and Oldenburg.

In his new animation Johnson combines a variety of colorful dots, dashes, curves and squiggles to signify waves or possibly static. Like an ocean of marks it begins swearing. It swears with as many swear words or phrases that the artist could remember using or hearing in his life, recombining them into a seemingly infinite variety of aggressive language. Presented as a sculpture, this video is then projected through line drawings made out of wire. These wires draw a black impression on the video screen, and the resulting effect is mesmerizing and beautiful, akin to digital choreography.

Ezra Johnson, born 1975 in Wenatchee, WA, received his MFA in painting from Hunter College in NYC in 2006. He work has been exhibited at the Hammer Museum in LA, Site Santa Fe and the ICA in Philadelphia, as well as numerous national and international exhibitions, and placed in prominent collections worldwide. This is his third project at F+V and his first solo exhibition here. Please join us on Thursday, Oct 2nd for a public reception and light refreshments with the artist. For further information please contact Nick Lawrence at [email protected] or 212-691-7700.