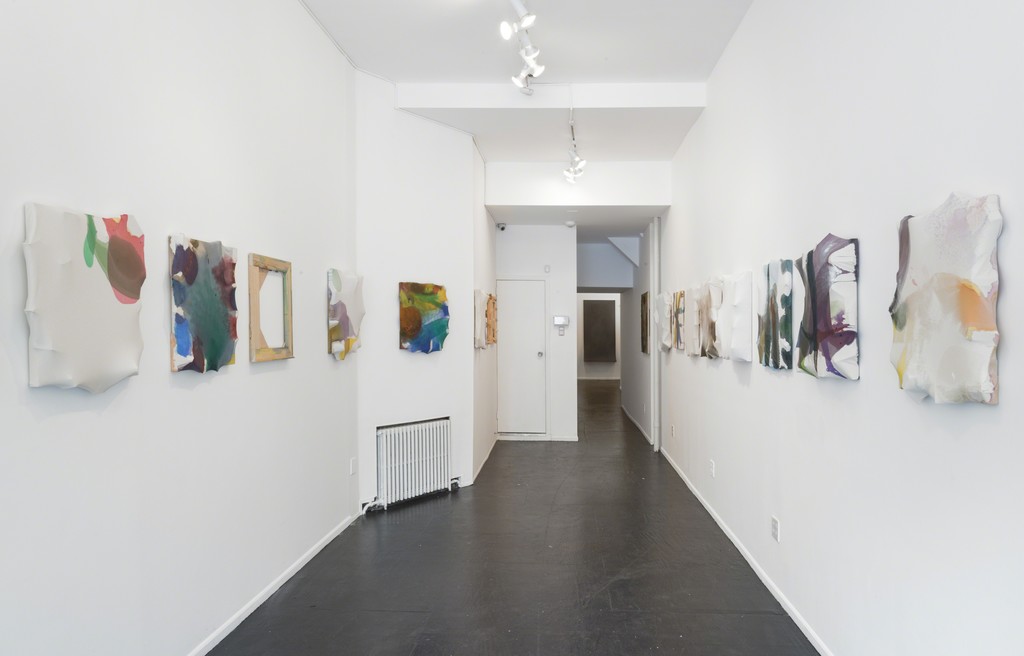 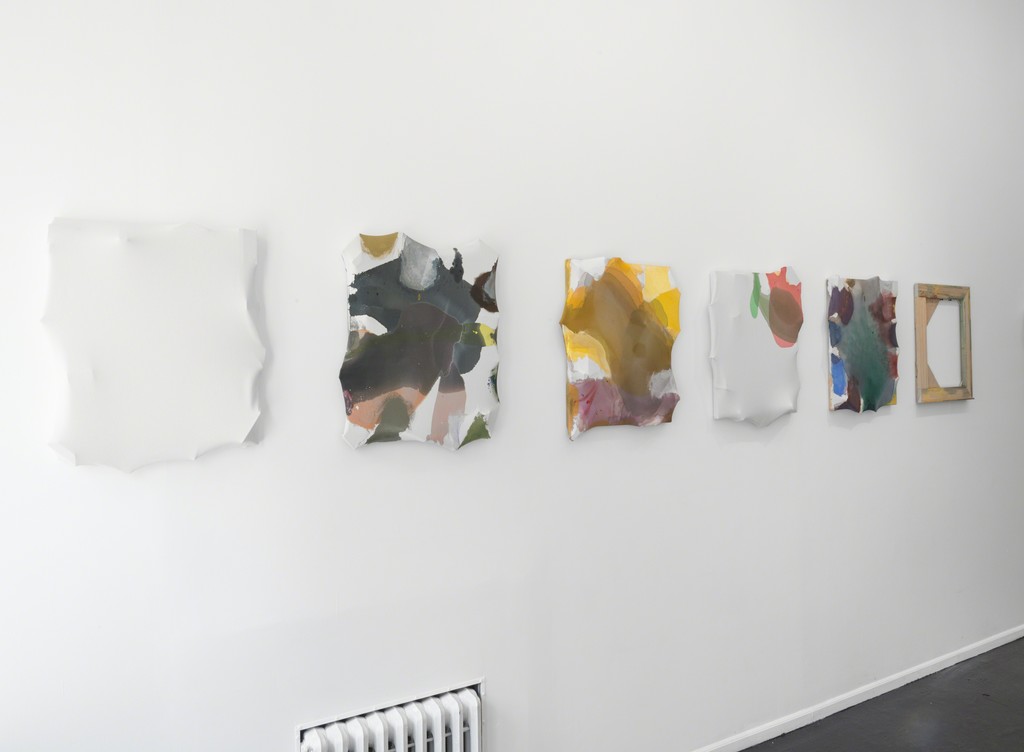 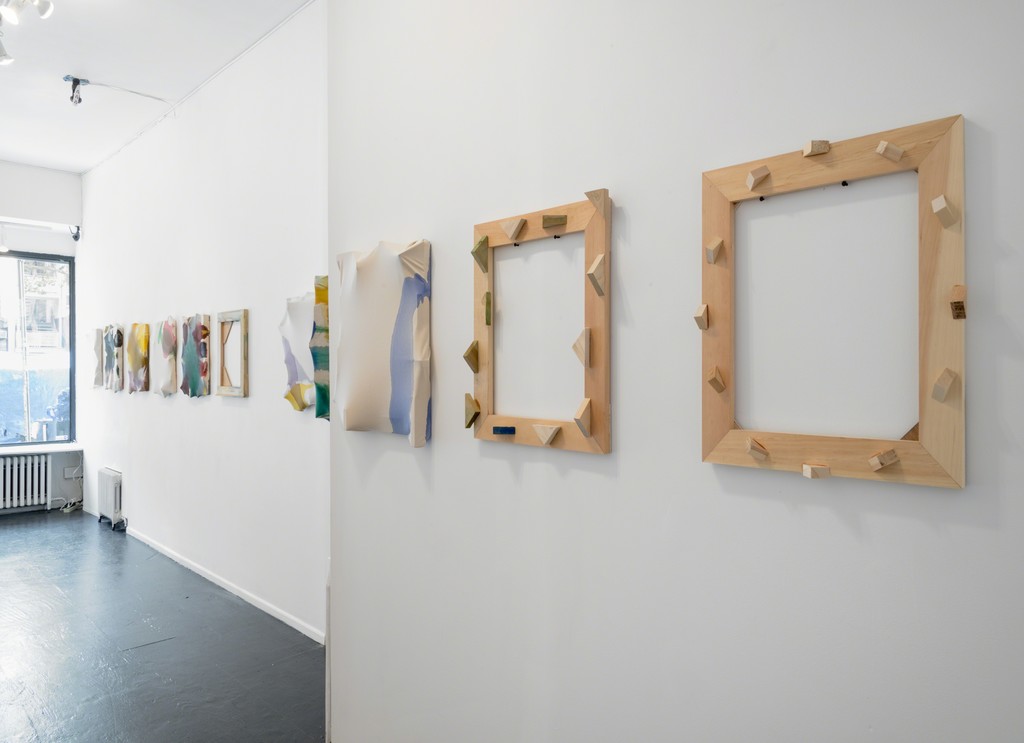 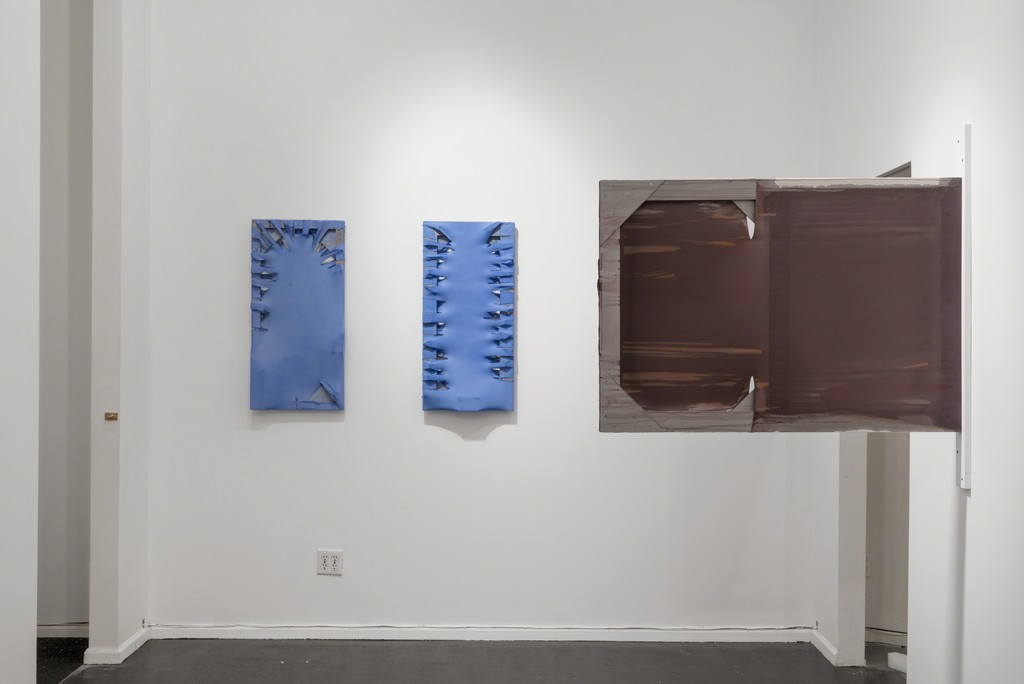 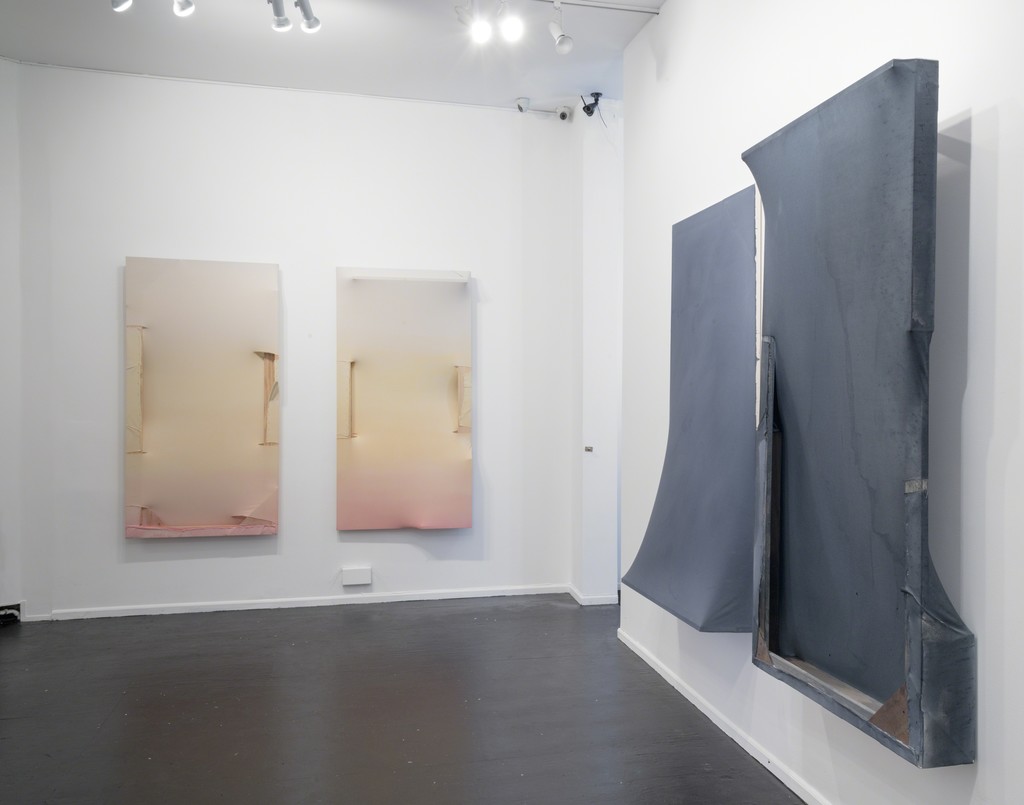 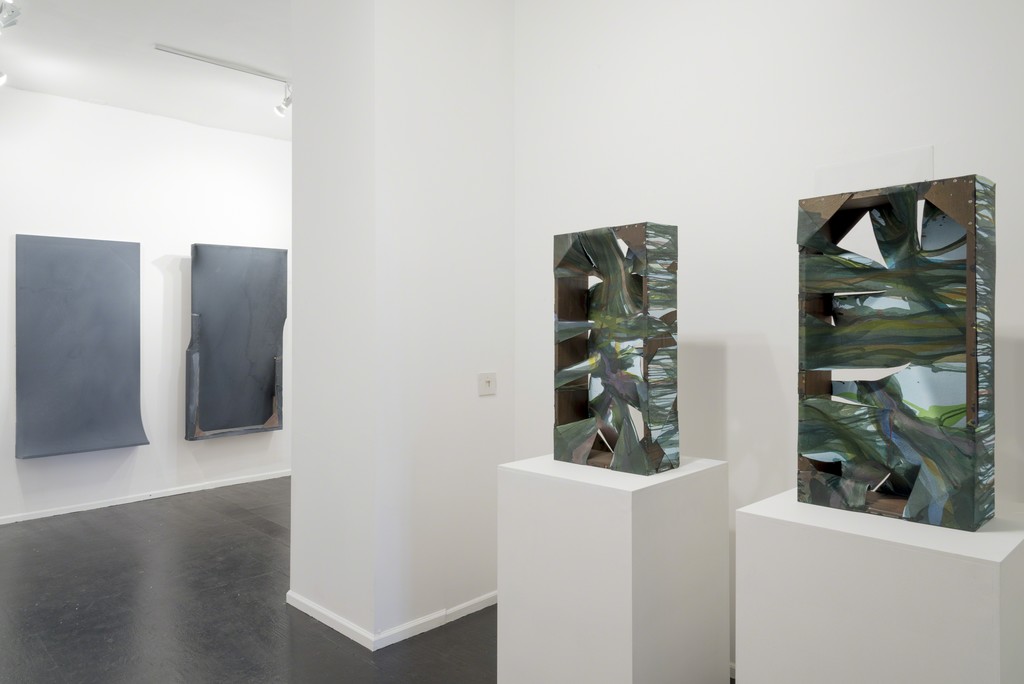 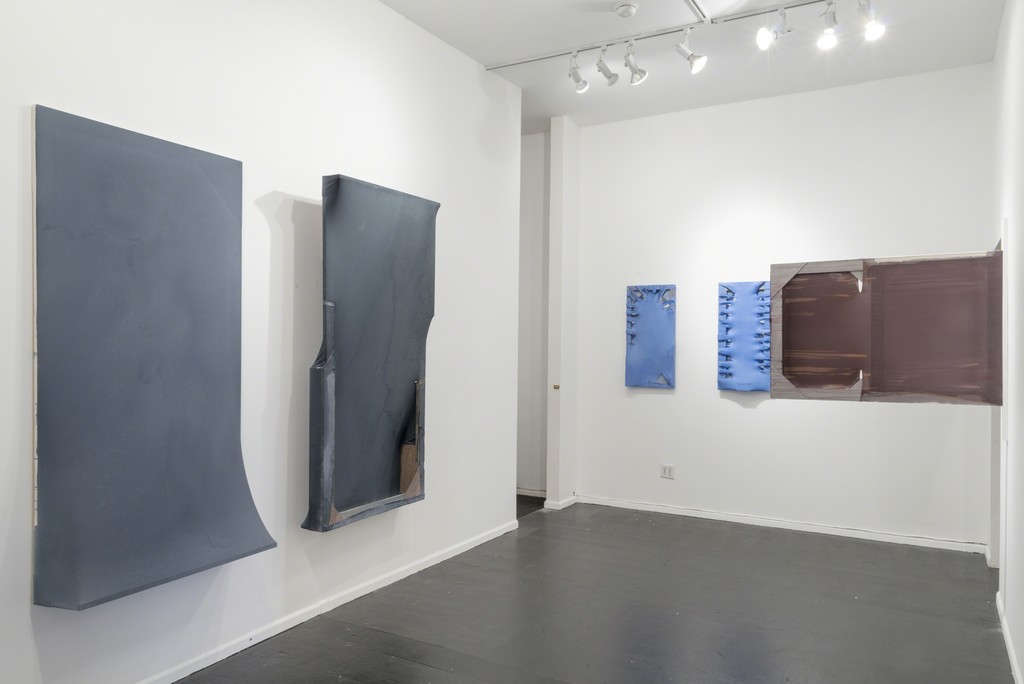 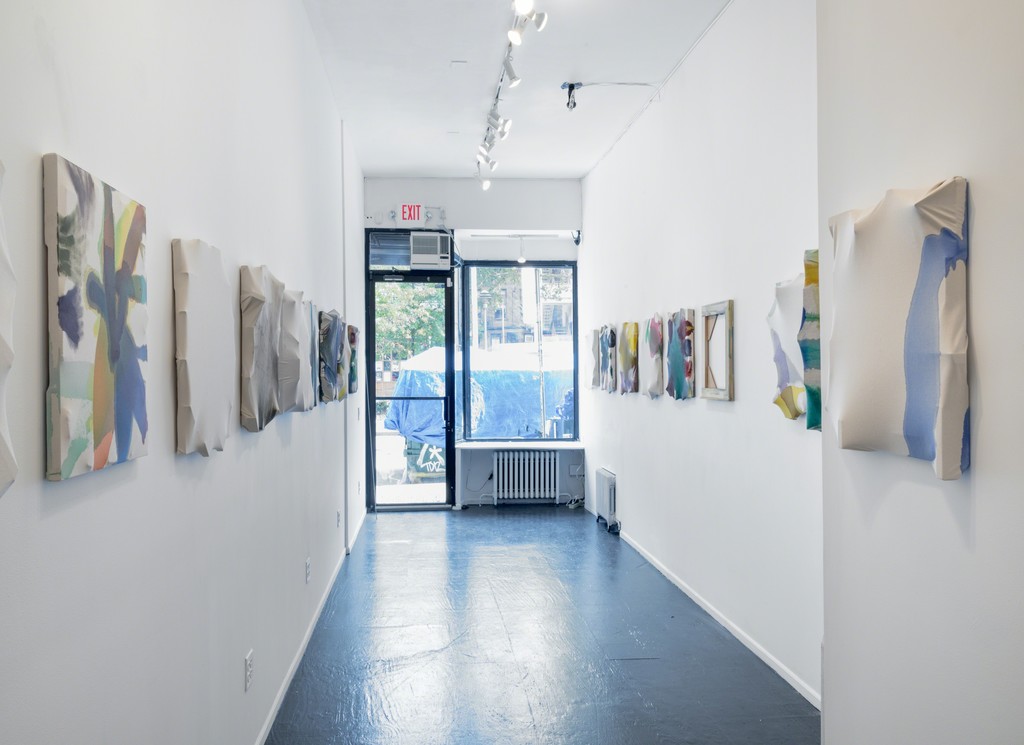 Freight and Volume is pleased to present Trees Breeze Green, the first solo exhibition in New York of paintings by Maria Walker.

The show’s title is taken from a poem by Walker, whose studio practice also includes poetry writing. These three words reflect a sensibility that is at once highly personal and formally rigorous, and that unites all of Walker’s artistic work. Their repeated “ree” provides a satisfying rhythmic foundation upon which the varying initial consonants place color deliberately and evocatively, creating gracefully moving space. As the rhyming “z” sound of the first two words dissolves into the fluid “n” of “green,” we see how this structure gives way to, and exchanges with, subject matter: the personal content of the phrase allows circumstance into the relationship between meaning and form. In the same way, Walker’s poured or dripped paint runs between the wooden outcroppings of the irregular stretchers, accepting at once the dictates of gravity, chance, and the artist’s personal experience.

Walker makes paintings by treating wood, canvas, and paint with equal attention. She assembles her stretchers from variously sized wooden boards and scraps leftover from the stretcher-building process. She also re-uses wood from her own discarded stretchers, which carry the memory (and paint stains) of previous paintings. The canvas and paint are applied as an extension of this underlying wooden drawing without privileging the surface. As a result, the paintings at times appear to be inside out, while others are reversible and can be displayed with either side facing forward, or standing freely on their own.

Walker’s three-dimensional stretchers develop their own internal logic, but they also often refer to external objects or events of personal importance. The Calendar Paintings record the events or non-events of Walker’s studio, confronting the passage of time and bearing witness to the studio rhythms by re-using any paint leftover during, say, a given month or a year. The stretcher’s protrusions organize the paint application into temporal units, à la a clock or a calendar, in groups of twelve or 52.

The Window Paintings refer to certain significant windows, from which they derive their dimensions (these include the windows in Walker’s studio, in her home, and in her mother’s or sister’s homes). They explore a variety of means of addressing the apparent tensions inherent to windows: between a thing we look through and a thing we look at, between spatial, perspectival view and flattened structure, and above all between the quality of light arriving to the eye from a distance, unpredictably broken and reflected along the way, and the matter-of-fact light directly reflected to us by quotidian objects near at hand, no less rich for its apparent straightforwardness. Walker’s work does not attempt to resolve these tensions; neither does it shy away from their personal, emotionally complex, and not-fully-describable elicitations.

Maria Walker (b. Philadelphia, PA 1980) received her MFA from Tyler School of Art and her BA in Visual Art from Brown University, where she also completed a Capstone Project in Poetry. She attended the Skowhegan School for Painting and Sculpture in 2011, and received an Individual Grant from the Belle Foundation for Cultural Development in 2013. Walker’s work has been published in the Smithsonian Magazine and reviewed as a Critic’s Pick on Artforum.com, as well as in the Brooklyn Rail, New American Paintings, and Beautiful Decay. In 2014 Walker released Wise Object, a chapbook of her poems, in conjunction with her solo show at Projekt722 in Brooklyn.