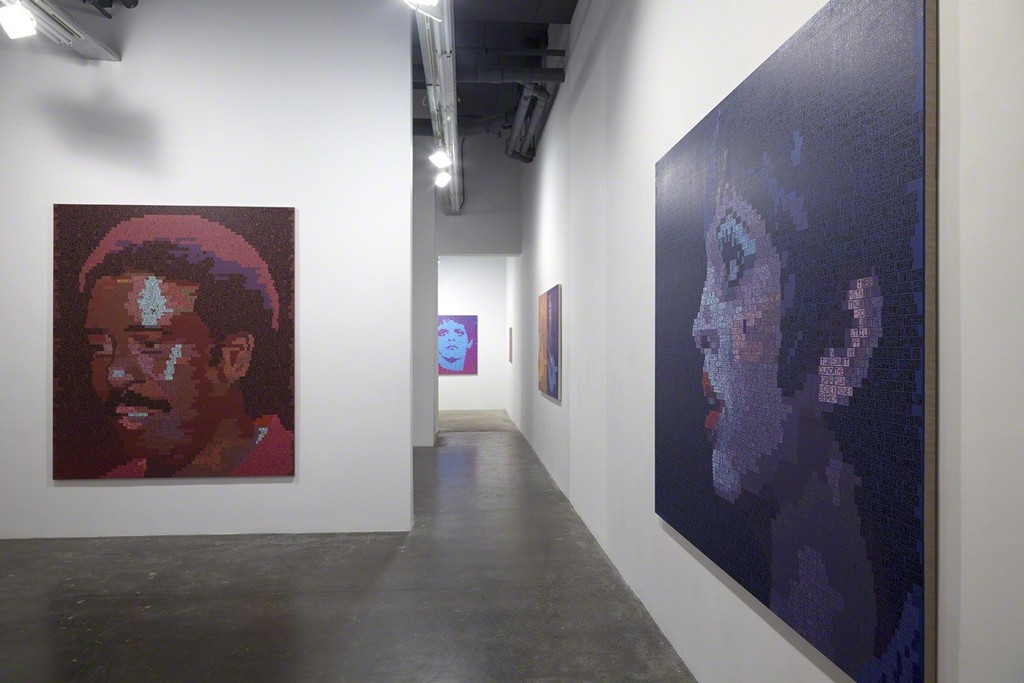 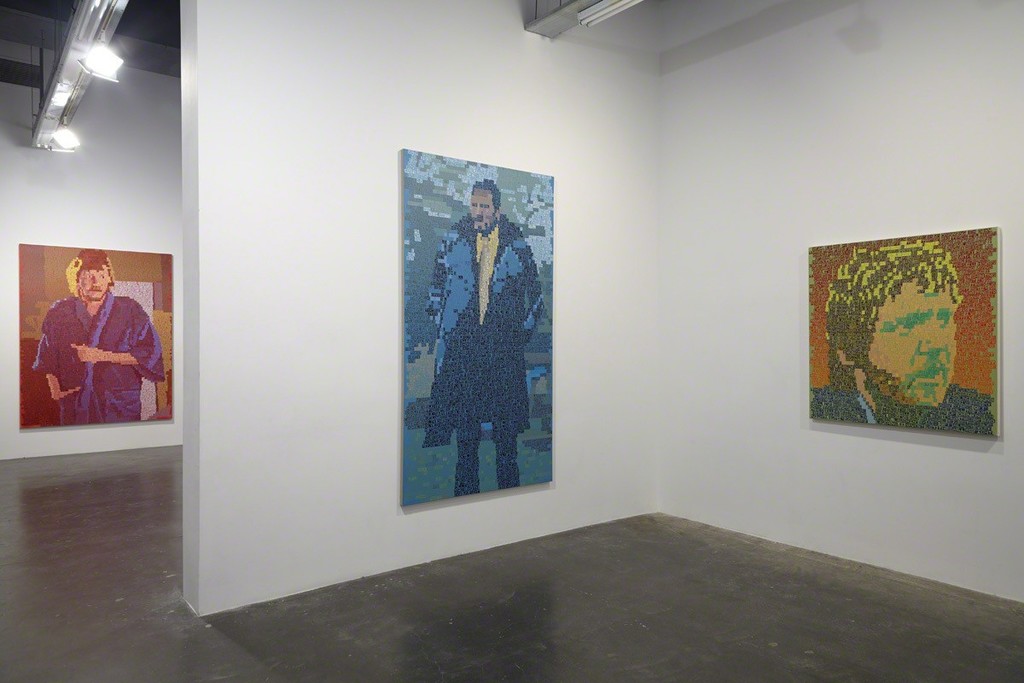 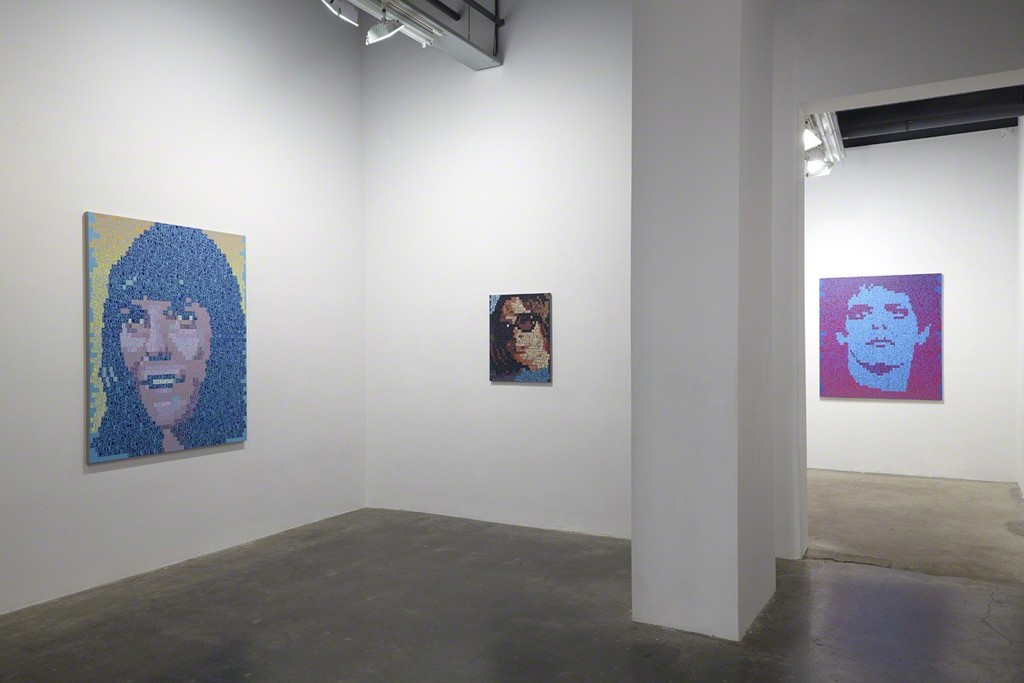 Freight + Volume is pleased to announce There’s a Riot Goin’ On, our fourth solo exhibition by painter Erik den Breejen. A master of several disciplines, including singer/songwriter of his former band Big Game, Den Breejen is above all a painter. His paintings play with a mosaic of text, color, and pattern, and the embodiment of music, film, comedy and literature. He uses lyrics, quotes, jokes, and poems of iconic figures from the early 1970s to express the collective - and sometimes tragic – unconscious of the time. The title of the exhibition, There’s a Riot Goin’ On, comes from the 1971 Sly & The Family Stone album of the same, which itself was named in response to Marvin Gaye’s What’s Going On album (also 1971). In a one-two punch, the paintings use text to create both mosaic-like portraits as well as project the voice of these cultural icons.

There’s a Riot Goin’ On takes a commanding look back at the early 70’s and specifically explores the lives and work of creative revolutionaries such as Richard Pryor, Harry Nilsson, Marvin Gaye, Joan Baez, and Allen Ginsberg, among others. Den Breejen investigates the role of the artist as messenger from another state of consciousness. These artists, comedians, musicians, poets, and rock stars channeled their inspiration to confront the rules and norms of their time. Den Breejen chooses as his subject radicals who engaged and challenged their generation. His portraits revisit and transform their observations. His recent paintings tell a history that has been recorded, portrayed, lived and felt by these people. In this sense, his technique can be seen as a kind of time travel.

The exhibition discloses that things are not always what they seem, or, in Neil Young’s words, that “there’s more to the picture than meets the eye.” The individual works reveal more than what is presented on the surface. There is a kind of in-and-out phenomenon created by the large fields of text and color. It’s easy to fall into these paintings and slip through the gaps between words, to experience the painting as a painting, as abstraction. The words disappear and they become unadulterated color, or moments of paint, then the portrait reveals itself. The same can be said of the subjects themselves, particularly Karen Carpenter, who projected “wholesome” values seemingly in reaction to the radical voices of the period, but was deeply troubled in her personal life.

Although the words are painted in order and flow from left to right and top to bottom, one does not typically read them in a traditional manner. As you read the text you read the painting and become tossed around in moments of pure feeling. The varying colors of text used to create the image produce blotches that break up the linear read and suggest more of a strange, idiosyncratic, even tactile poem. The paintings can become flashes and jolts of experience; they make you pause, reflect, look, and think. There are several different ways to read these paintings, and therefore it’s tough to see all their elements at once. The works ask you to spend some time with them, to let the letters and colors explain their content.

A passage of text in Richard Pryor’s portrait proposes that white people are becoming a minority. It cuts through politically correct politeness and punches you square in the nose. The text has no sugar coating, and leaves a real, in-your-face impression, because, well, There’s a Riot Goin’ On:

Shortage of white people lately. I ain’t see no white folks no more. Y’all stop fuckin’?!? White folks into yoga. You can’t get no nut doin’ no yoga. You got to get the pussay! They stopped fuckin’ ‘cause some rich white man came up to them and said, “Aw c’mon, cut the crap! Jesus Christ, there’s too many people on earth! I have no place to ride my horsey!” There will be no shortage of niggers. Niggers is fuckin’. We got to have somebody here to take over.

In the same way that the Richard Pryor quote is about race and overpopulation, Den Breejen’s painting of Allen Ginsberg (“Friday the Thirteenth”) is about the environment, war, and power, and equates earth pollution with mind pollution.

There are many parallels between the present day and the early 70’s, including some ever increasing problems: more apathy, more environmental destruction, more corruption, more corporate brainwashing, more technology based addiction. However, were it not for the actions of these radicals, the problems might have remained repressed — hidden symptoms of a sick society. This exhibition asks the question What is “revolutionary” today? Den Breejen’s paintings allow art to lead us to some of these answers, and provides the space to challenge us and our beliefs. The icons that Den Breejen paints were and remain game changers and rule breakers. By evoking the energy of their time, Den Breejen asks us, sings to us, “What’s Going On?”

Erik den Breejen was born in Berkeley, California in 1976. He is a graduate of Cornell University where he received his MFA in 2006. He studied art and music at U.C. Santa Cruz before transferring to the California College of Arts and Crafts (now California College of the Arts), where he majored in painting. He has exhibited throughout the United States and Europe. Key solo exhibitions include Smile at Freight+Volume in New York (2011) and Image, Music, Text at the UNTITLED Art Fair in Miami (2012). His work is in collections throughout the world. He lives and works in Brooklyn, NY.

Please join us on Thursday, May 1st to celebrate Erik’s fourth solo at Freight+Volume, There’s A Riot Goin’ On from 6-9pm. Refreshments will be served. For more information or to schedule a preview of this exhibition, please contact Nick Lawrence at 917-880-7299, or [email protected].