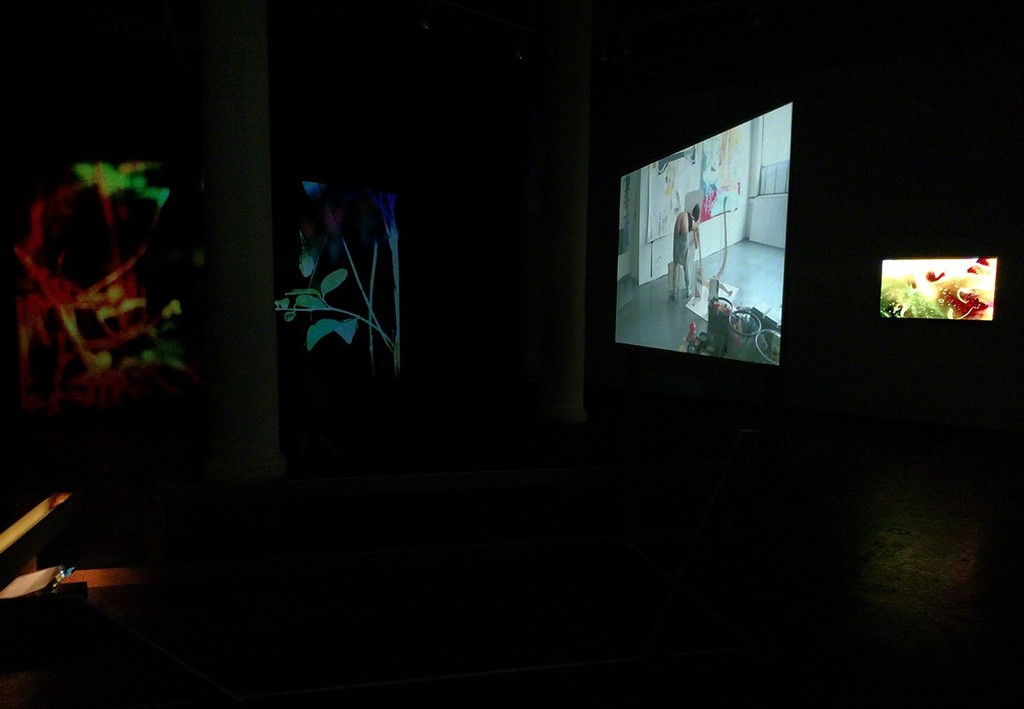 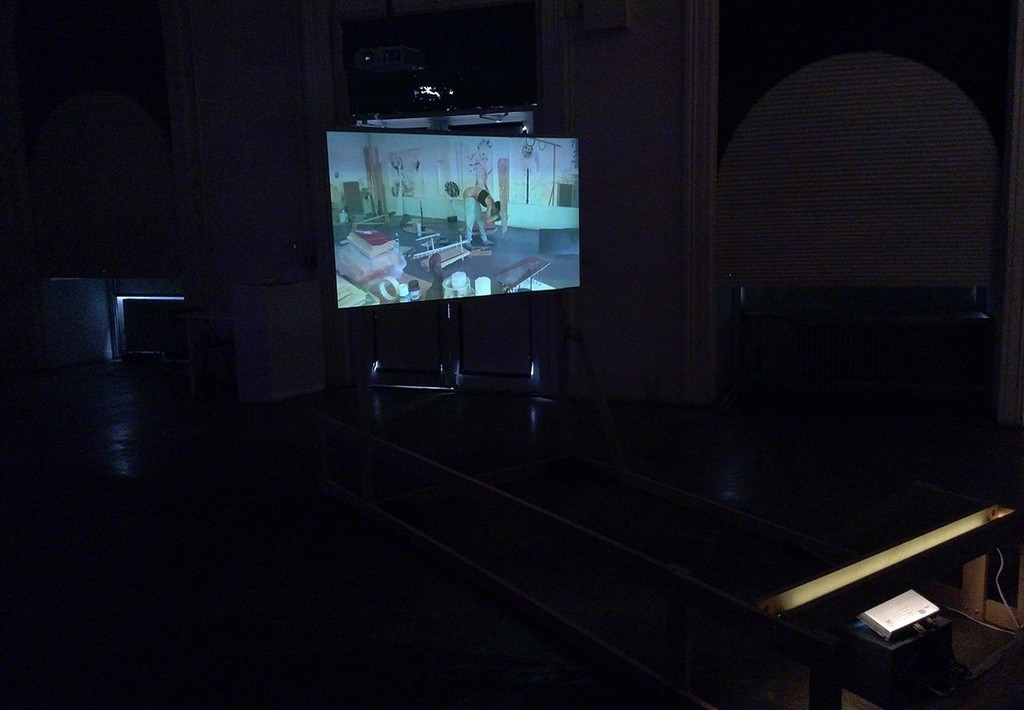 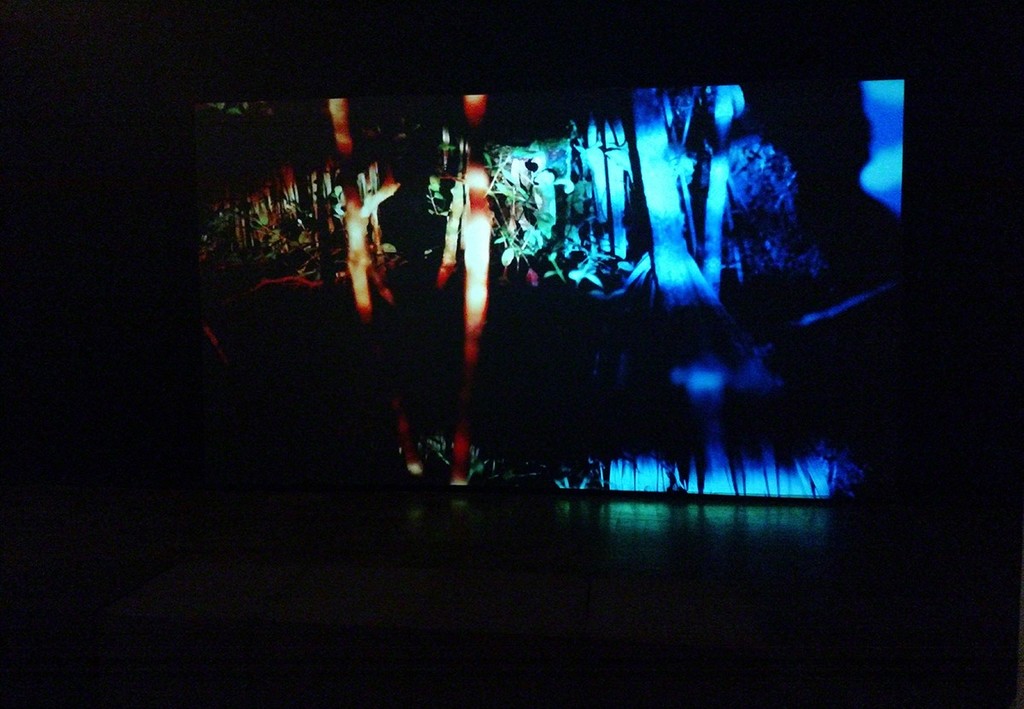 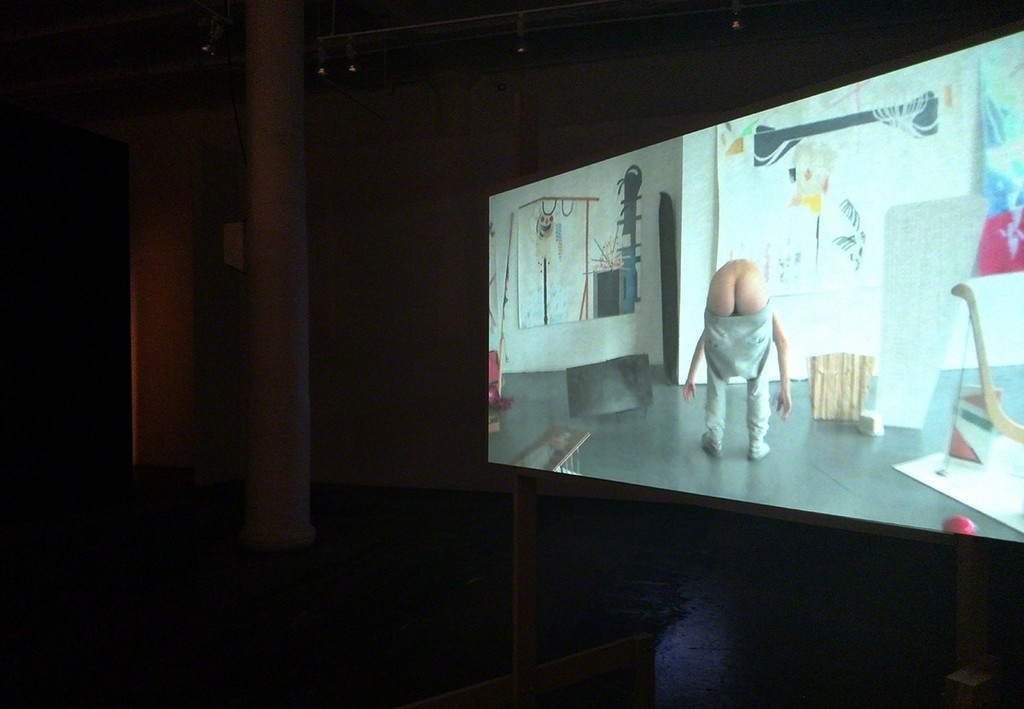 Enchanted Space is an exhibition that features three fearless New York-based artists. Their work processes space and time in daring and unexpected ways and challenges our sense of reality and social norms.

In Anna K.E.’s Gloss of Forehead (2011), a disorienting video is projected onto a board in the grip of a skeleton-like unfinished wood frame. The protagonist is a naked derrière that busily and erratically moves about an artist’s studio, with debris scattered about the floor. The figure grabs and assembles bits and pieces, then takes things apart, as if to construct meaning out of uncertainty. Anna K.E. is participating in the upcoming Frieze New York. Born in Tbilisi, Georgia, she lives and works in Berlin and New York City.

For Everglades (2014), Dana Levy ventured deep into the wilderness of the Everglades National Park at night. She projected vibrantly colored lights onto the tropical vegetation using a generator she had carted into the jungle, and recorded the stunning but eerie setting. The ominous soundtrack accompanying the immersive video projection is composed from sounds of environmental atrocities, such as fracking. The work reflects upon humankind’s disastrous attempts to shape and control natural phenomena. Dana Levy’s solo project is currently on view at the Israel Museum, Jerusalem. She was born in Tel Aviv, Israel and lives and works in New York City.

Marilyn Minter´s iconic Green Pink Caviar (2009) propels the audience’s voyeuristic experience to a visceral extreme. The sharp, high-definition video captures the movements of a sensual female tongue licking brightly colored transparent candy. Blurring boundaries between the languages of art and advertising, the video is presented as a fictional trailer for an imaginary film, an hypnotic experience that “is an ad only for itself.” A retrospective of Marilyn Minter’s work is currently on view at the Contemporary Arts Museum Houston and will travel within the U.S., with stops at the Museum of Contemporary Art Denver and the Orange County Museum of Art, CA, concluding at the Brooklyn Museum, New York. Born in Shreveport, Louisiana, Minter lives and works in New York City.

Barbara London is a New York-based curator, consultant and writer who founded the video exhibition and collection programs at The Museum of Modern Art, New York, where she worked between 1973 and 2013. During her tenure, she oversaw the acquisition of more than 500 new media art works, including installations, single-channel videotapes, and music videos. Currently she teaches at Yale in the School of Art