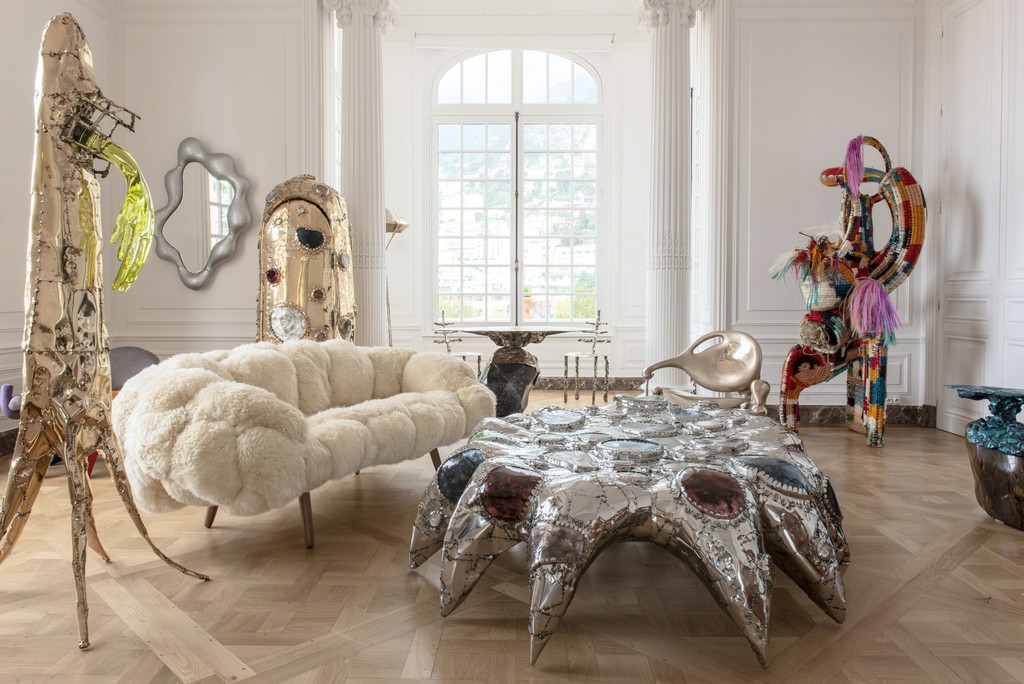 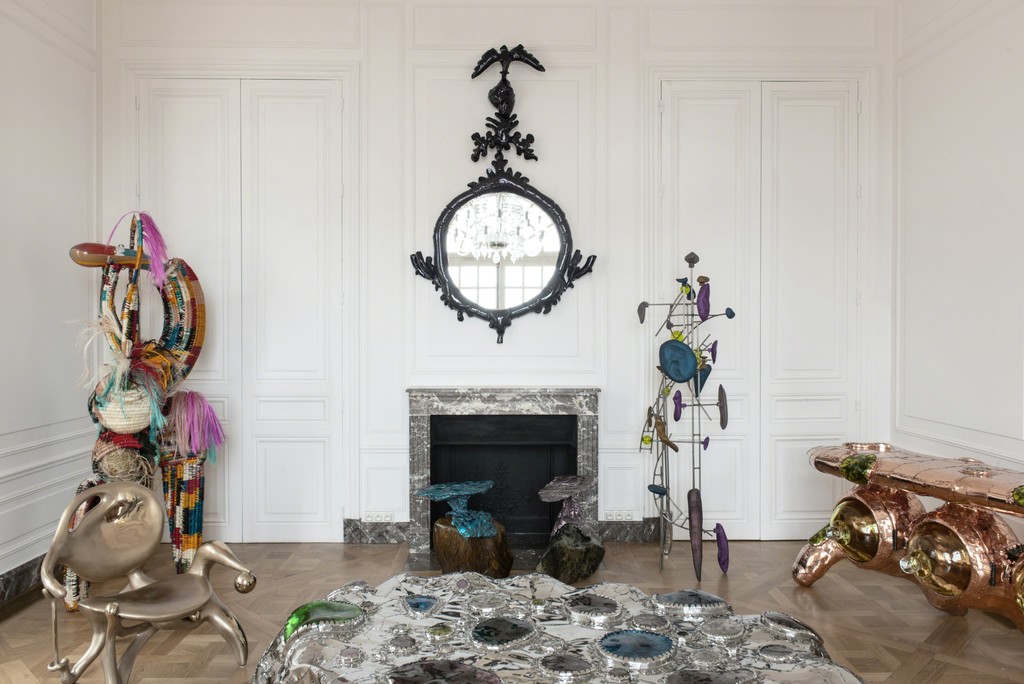 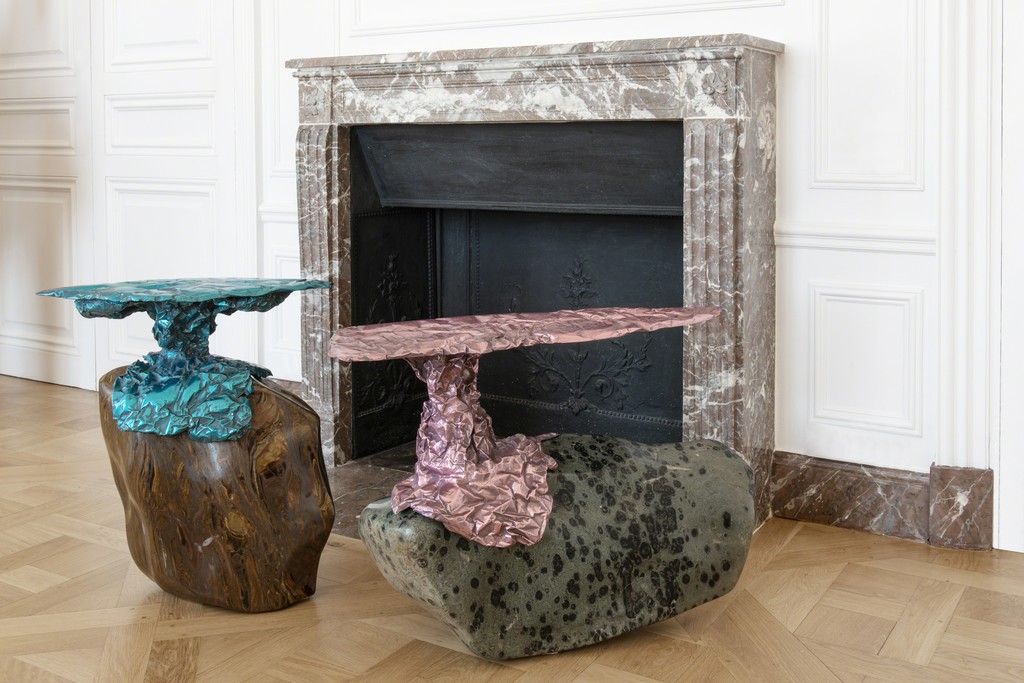 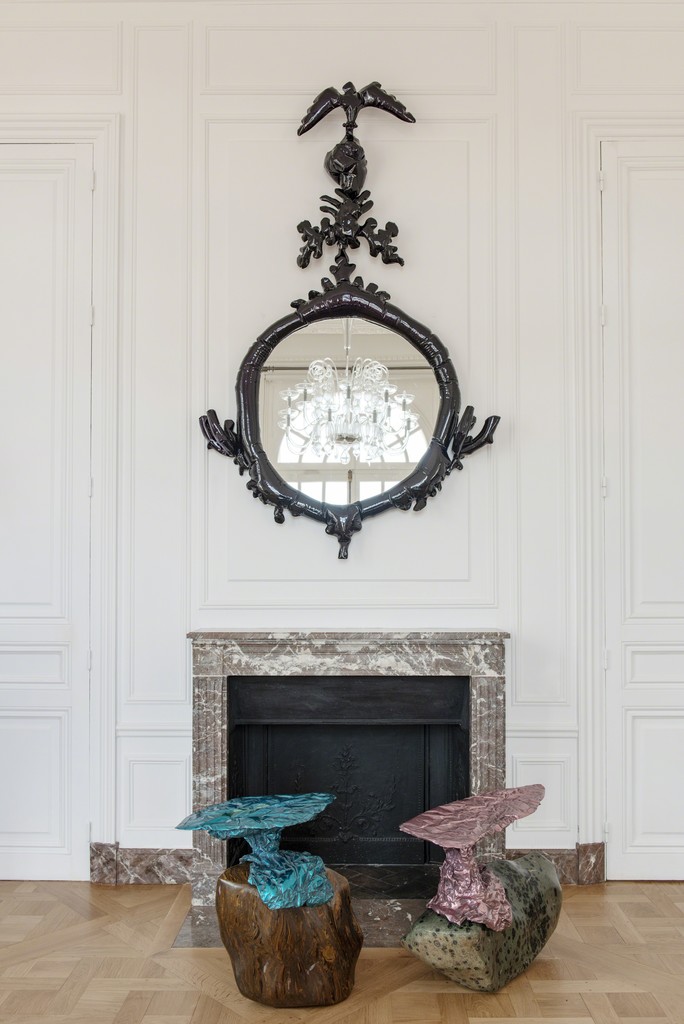 For Friedman Benda's inaugural presentation at NOMAD, the new traveling showcase for collectible design, the gallery will present a dynamic viewing experience from American designer Misha Kahn. This installation will demonstrate Kahn’s romantic, furtive and improvisatory practice while highlighting his evolution as a designer with the debut of 15 new playful, singular creations with distinctive narratives.

This presentation will feature three new tables from Kahn’s ‘Rock Bottom’ series, inverted in form and inspired by the construction of ancient jewelry where stones are directly cast into gold. For this body of work, Kahn contrasts seemingly rough, unrefined construction with large polished ‘rock bottom’ bases made of Tiger’s eye, jasper and hematite enveloped in bronze.

A side table and floor lamp, assemblages assemblages of glass, sea shells, fibers and discarded materials elaborately woven together, are continuations of his ‘Scrappy’ series (a body of work produced by Gone Rural in Swaziland) will make their first public appearance.

A new ‘Enchanté’ sconce and floor lamp made of bronze and glass will make their debut as well as two new chairs, different iterations from Kahn’s ‘Claymation’ series, which premiered to great acclaim this past year at Design Miami. The ‘Claymation’ series—expands upon the visual dialogue–epitomizes Kahn’s distinctive and imaginative approach to design. Kahn asserts: “I think furniture tends to be so static in its stance, and I wanted to try to capture this sense of levity and motion, like it was just a sort of freeze frame in an animation where shapes are having fun and happen to kind of have assembled themselves into chairs.”

A coffee table of stainless steel from his ongoing ‘angler’ series, part 'space ship,’ part 'luxury appliance,' is adorned with amorphous forms cast glass that appear to be melting onto the surface—which to Kahn, “feel like sapphires and rubies and gems that have gone limp and become infectious.”

Highlights of the exhibition also include new large-scale compositions, such as a bronze console table and cabinet, bursting and exaggerated in form.

Lastly, Kahn will present a newly completed surrealistic coat rack from ‘Flotsam and Jetsum.’ (The title comes from maritime law and denotes ‘discarded objects.’) A work that according to Kahn is influenced by “those little bright shapes you see when you open your eyes first thing in the morning - how they just become these little things you can see for an instant on top of everything else in the room.”