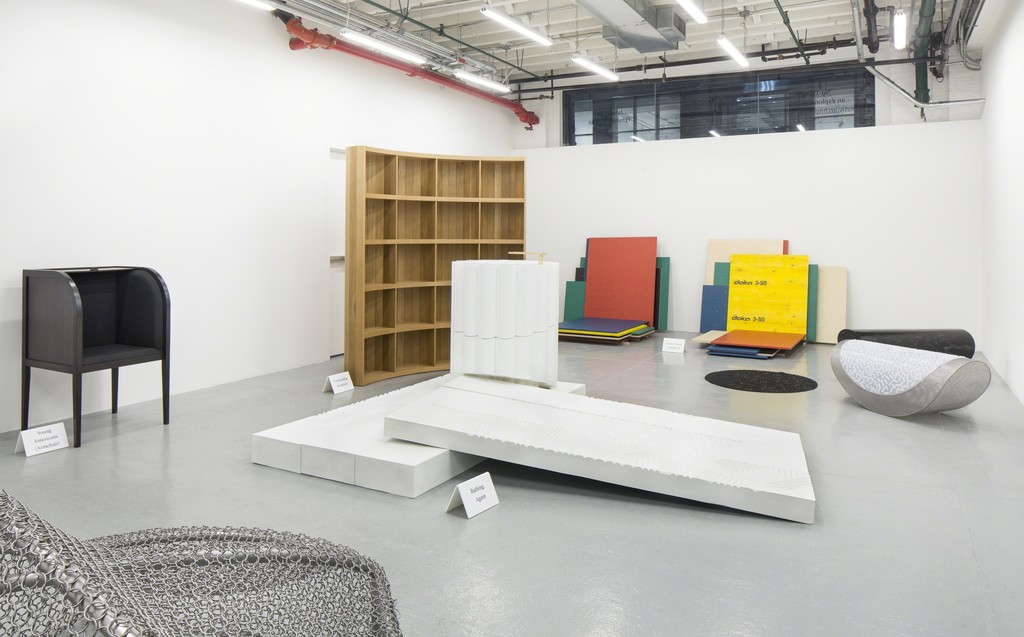 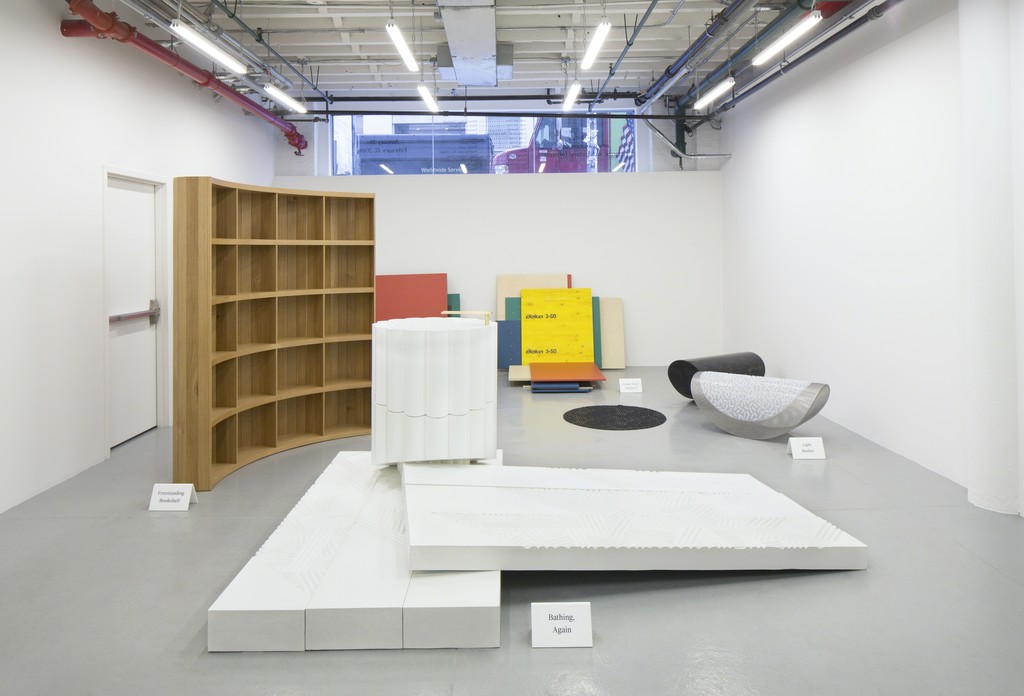 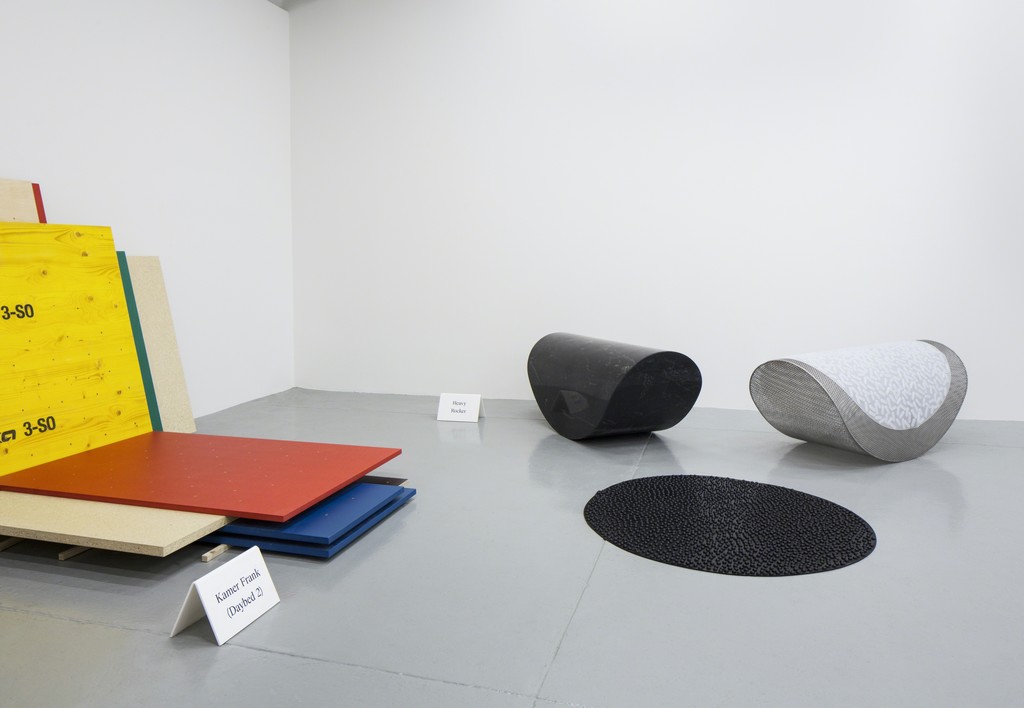 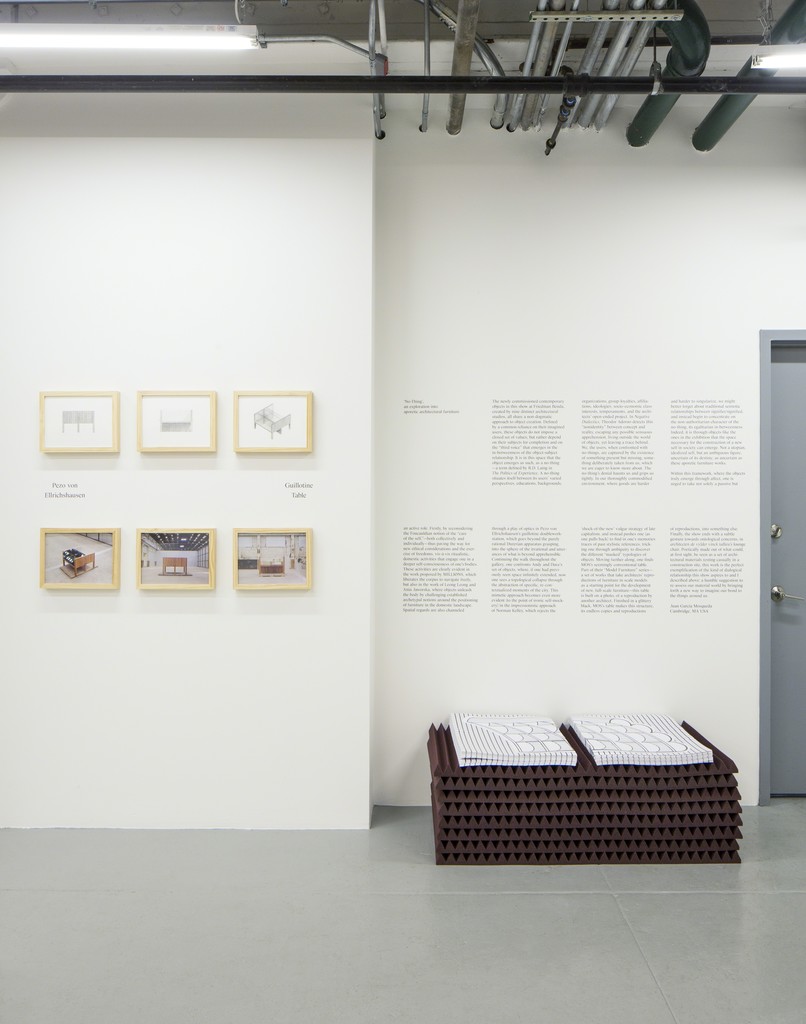 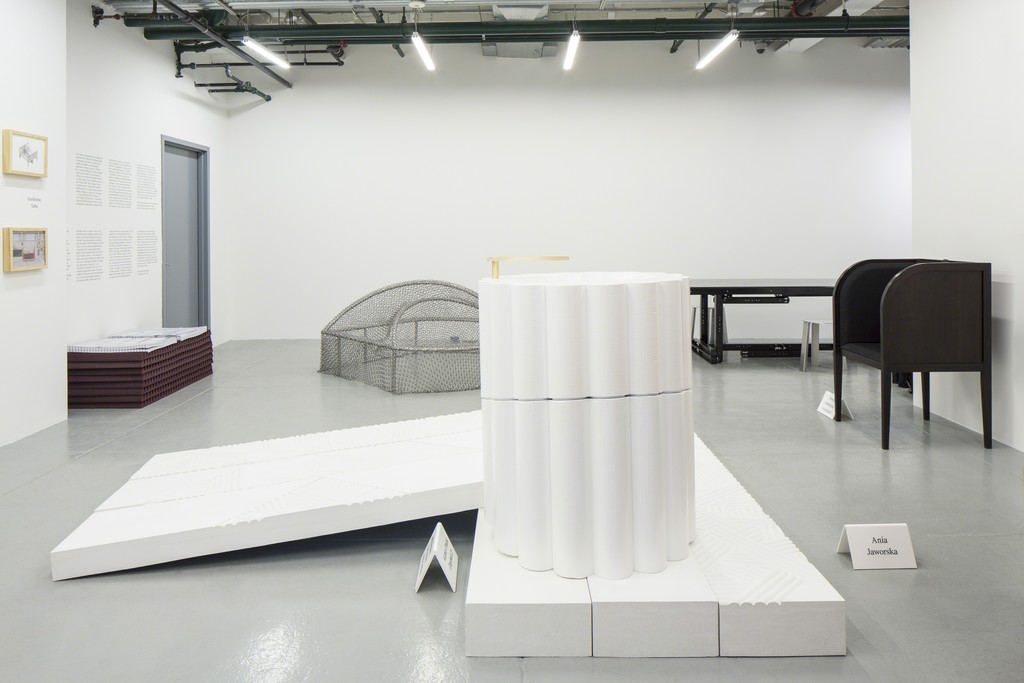 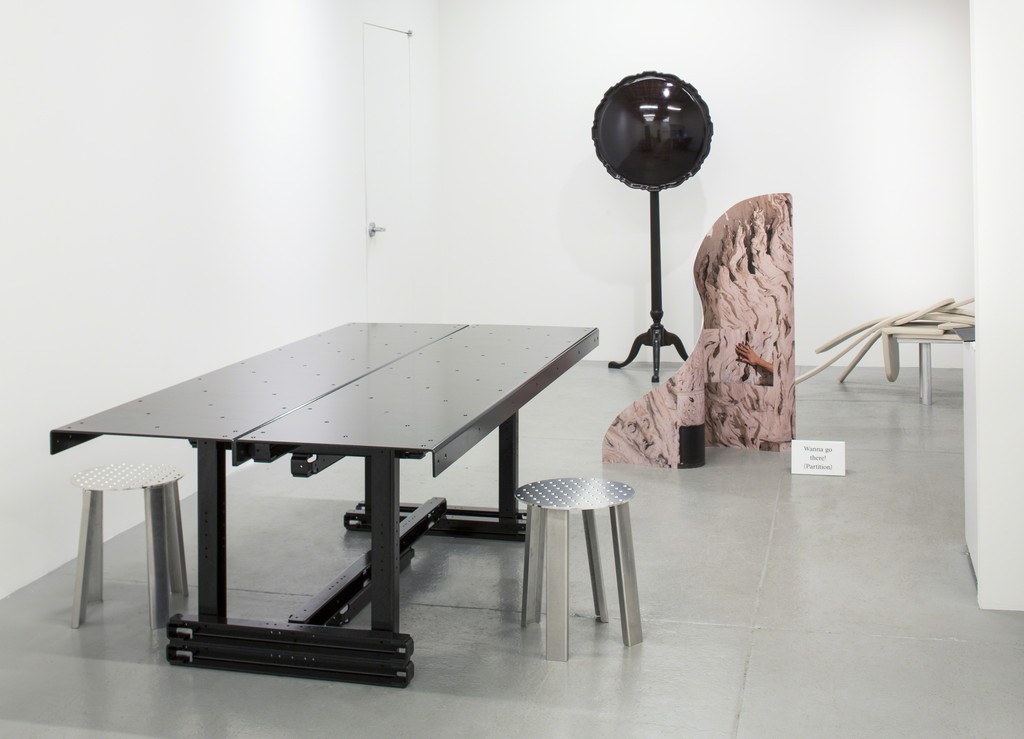 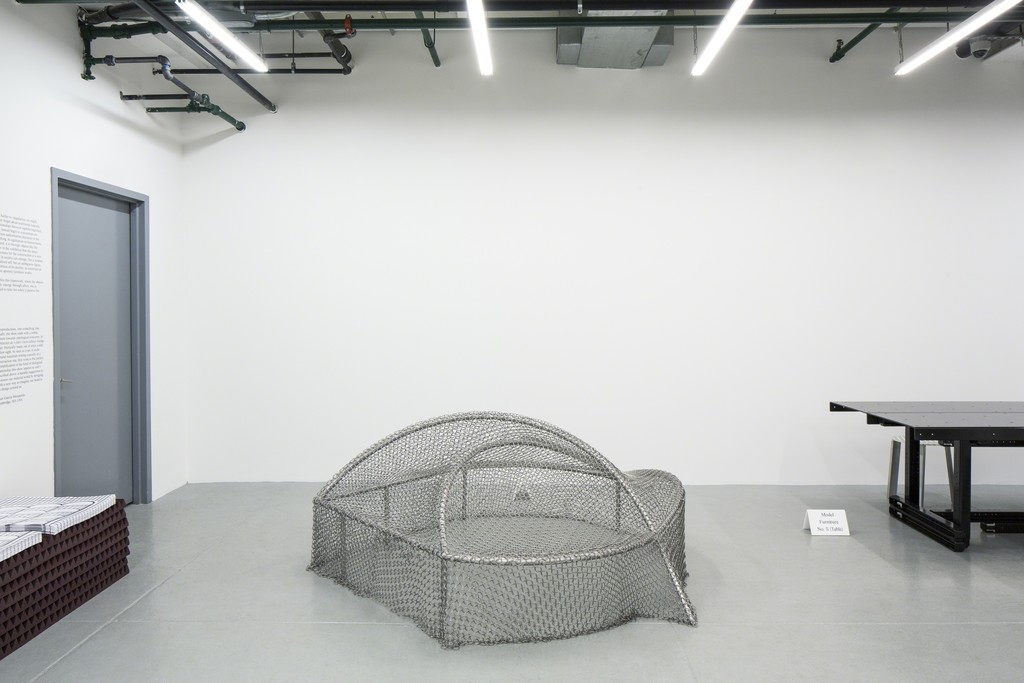 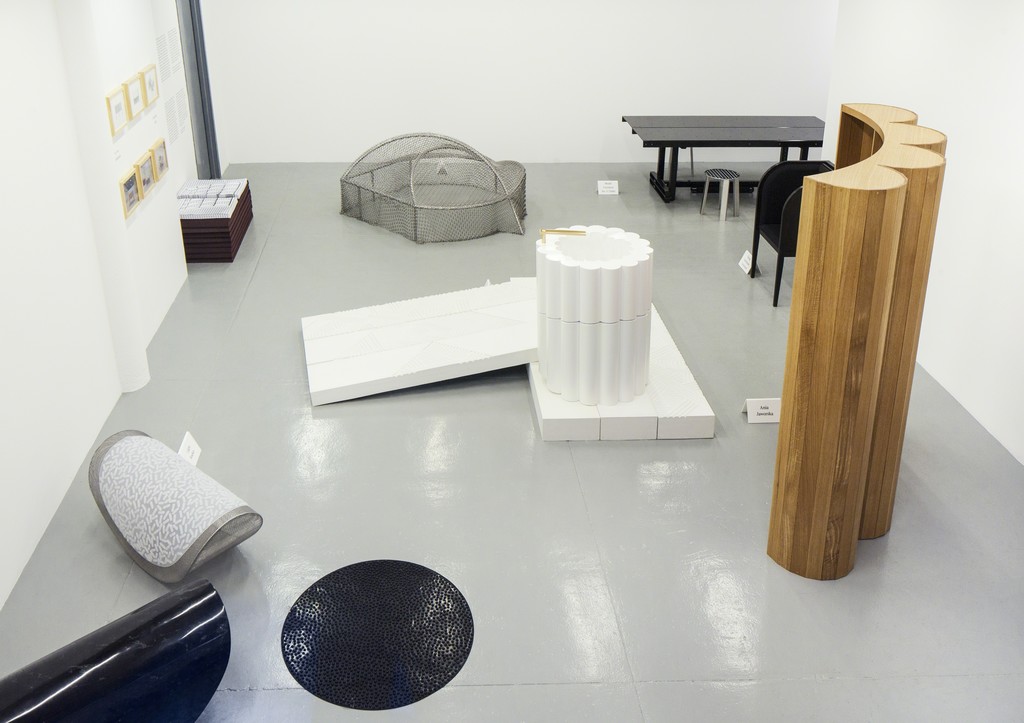 “No-Thing” examines the prevalence of authoritative domestic practices embedded in our collective unconscious that guides behavior towards our personal possessions. Some of these works are composed of a seemingly ordinary construction that relies on the user’s autonomous self for meaning through postulated use. The title alludes to a state of egalitarian “in-betweenness,” a term defined by R.D. Laing in The Politics of Experience—a reference to their makers’ non-dogmatic approach to object creation.

“It is through objects like the ones in the exhibition that the space necessary for the construction of a new self in society can emerge. Not a utopian, idealized self, but an ambiguous figure, uncertain of its destiny; as uncertain as these aporetic furniture works. Within this framework, where the objects truly emerge through affect, one is urged to take not solely a passive but an active role,” says Juan Mosqueda.

Presented in tandem with Friedman Benda’s ground floor gallery exhibition, “Inside the Walls: Architects Design,” a survey of important examples of architect designed furniture spanning the 20th century, curated by Mark McDonald. Featuring works by Frank Lloyd Wright and Marcel Breuer that strive for rationalization and demonstrate attempt to assert control over one’s creations, “Inside the Walls” serves as a corollary to the subjective user experience theme of “No-Thing.”

The newly commissioned contemporary objects in this show at Friedman Benda, created by nine distinct architectural studios, all share a non-dogmatic approach to object creation. Defined by a common reliance on their imagined users, these objects do not impose a closed set of values, but rather depend on their subjects for completion and on the “third voice” that emerges in the in- betweenness of the object-subject relationship. It is in this space that the object emerges as such, as a no-thing—a term defined by R.D. Laing in The Politics of Experience. A no-thing situates itself between its users’ varied perspectives, educations, backgrounds, organizations, group- loyalties, affiliations, ideologies, socio-economic class interests, temperaments, and the architects’ open-ended project. In Negative Dialectics, Theodor Adorno detects this “nonidentity” between concept and reality, escaping any possible sensuous apprehension, living outside the world of objects, yet leaving a trace behind. We, the users, when confronted with no- things, are captured by the existence of something present but missing, something deliberately taken from us, which we are eager to know more about. The no-thing’s denial haunts us and grips us tightly. In our thoroughly commodified environment, where goods are harder and harder to singularize, we might better forget about traditional semiotic relationships between signifier/signified, and instead begin to concentrate on the non-authoritarian character of the ‘no- thing’, its egalitarian in-betweenness. Indeed, it is through objects like the ones in the exhibition that the space necessary for the construction of a new self in society can emerge. Not a utopian, idealized self, but an ambiguous figure, uncertain of its destiny; as uncertain as these aporetic furniture works.

Within this framework, where the objects truly emerge through affect, one is urged to take not solely a passive but an active role. Firstly, by reconsidering the Foucauldian notion of the “care of the self,”—both collectively and individually—thus paving the way for new ethical considerations and the exercise of freedoms, vis-à-vis ritualistic, domestic activities that engage one in a deeper self-consciousness of one’s bodies. These activities are clearly evident in the work proposed by Milliøns, which liberates the corpus to navigate freely, but also in the work of Leong Leong and Ania Jaworska, where objects unleash the body by challenging established archetypal notions around the positioning of furniture in the domestic landscape. Spatial regards are also channeled through a play of optics in Pezo von Ellrichshausen’s guillotine double- workstation, which goes beyond the purely rational Durerian apparatus grasping, into the sphere of the irrational and utterances of what is beyond apprehensible. Continuing the walk throughout the gallery, one confronts Andy and Dave’s set of objects, where, if one had previously seen space infinitely extended, now one sees a topological collapse through the abstraction of specific, re-contextualized moments of the city. This mimetic approach becomes even more evident (to the point of ironic self-mockery) in the impressionistic approach of Norman Kelly, which rejects the ‘shock-of-the-new’ vulgar strategy of late capitalism, and instead pushes one (as one pull’s back) to find in one’s memories traces of past stylistic references, tricking one through ambiguity to discover the different “masked” typologies of objects. Moving further along, one finds MOS’s seemingly conventional table. Part of their Model Furniture series—a set of works that take architects' reproductions of furniture in scale models as a starting point for the development of new, full-scale furniture—this table is built on a photo, of a reproduction by another architect. Finished in a glittery black, MOS's table makes this structure, its endless copies and reproductions of reproductions, into something else. Finally, the show ends with a subtle gesture towards ontological concerns, in architecten de vylder vinck taillieu’s lounge chair. Poetically made out of what could, at first sight, be seen as a set of architectural materials resting casually in a construction site, this work is the perfect exemplification of the kind of dialogical relationship this show aspires to and I described above: a humble suggestion to re-assess our material world by bringing forth a new way to imagine our bond to the things around us.

Juan Garcia Mosqueda is an independent curator and former founder of Chamber, NYC. Chamber operated as a celebrated experimental design gallery in Chelsea from the year 2014 until 2017, providing a unique platform for artists, designers and architects from all over the world.