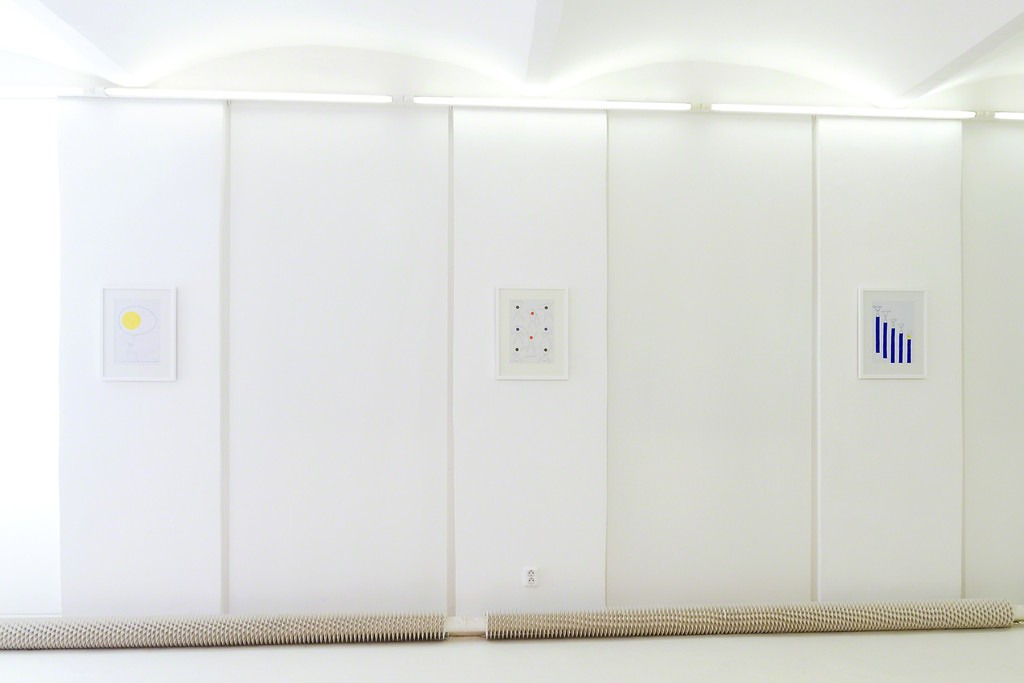 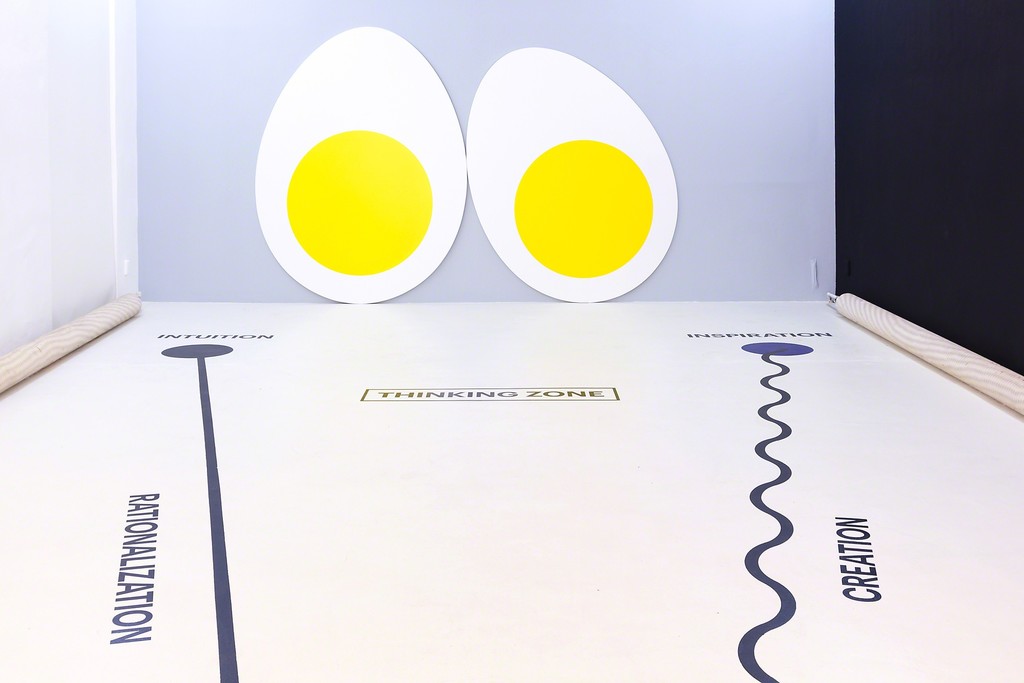 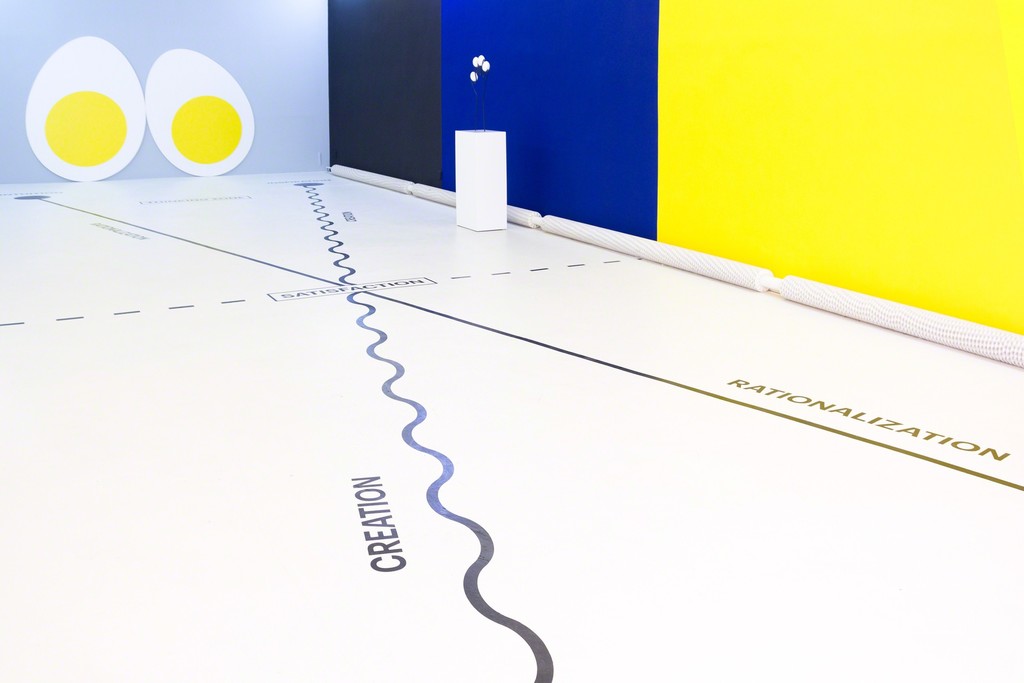 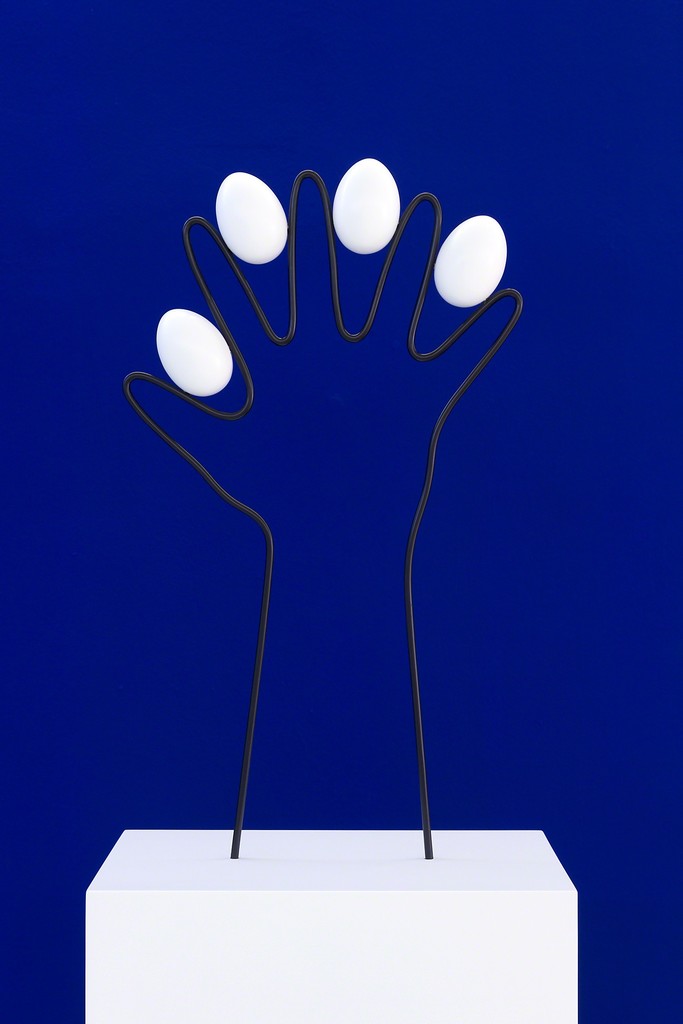 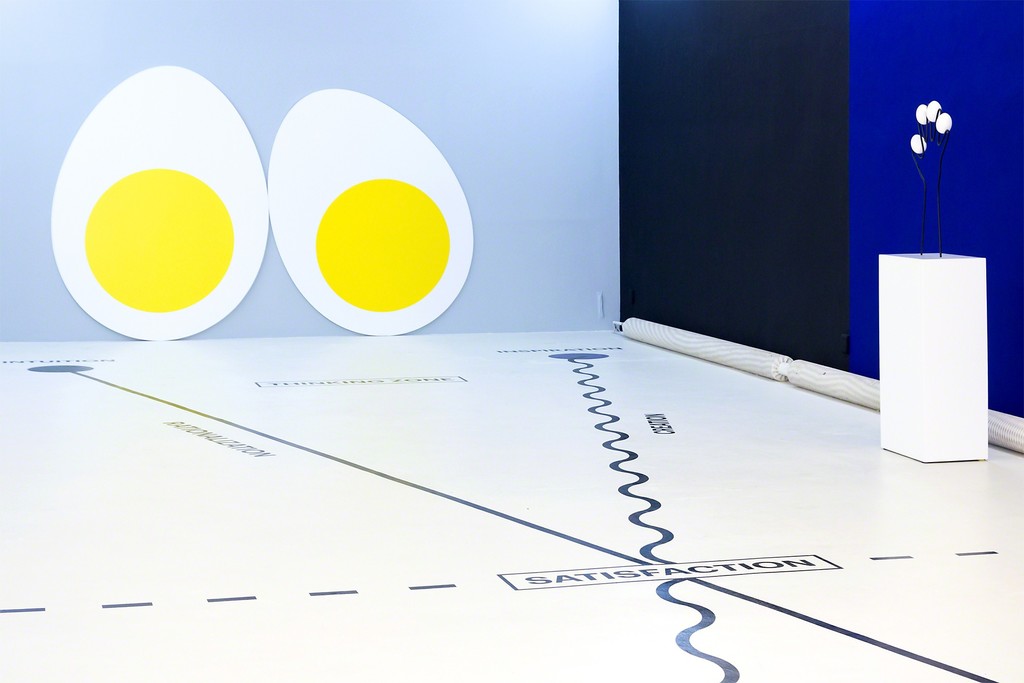 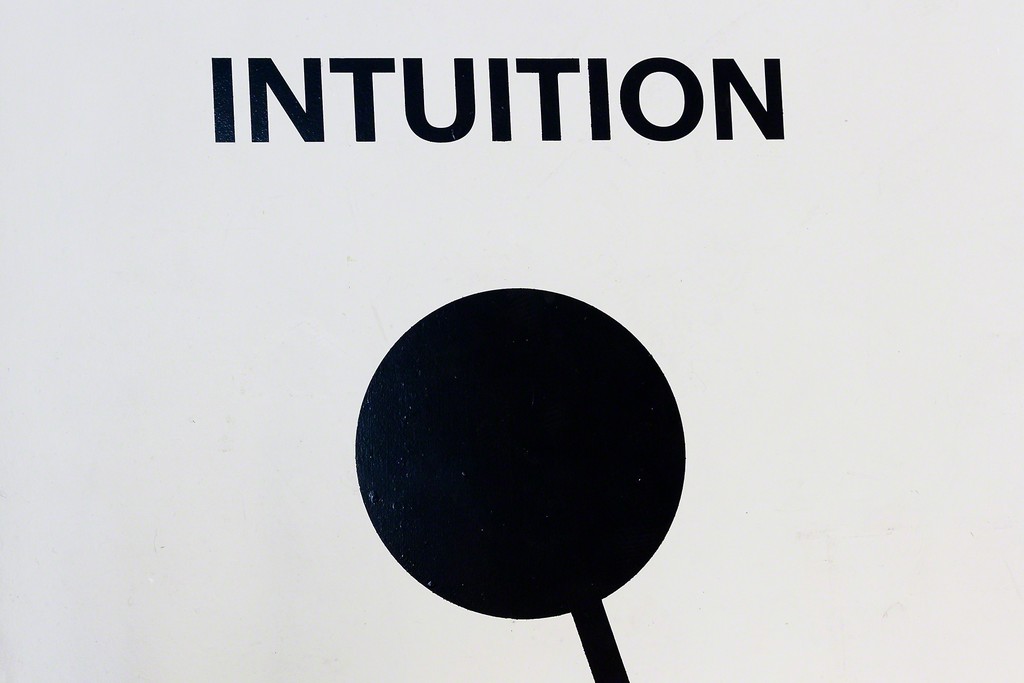 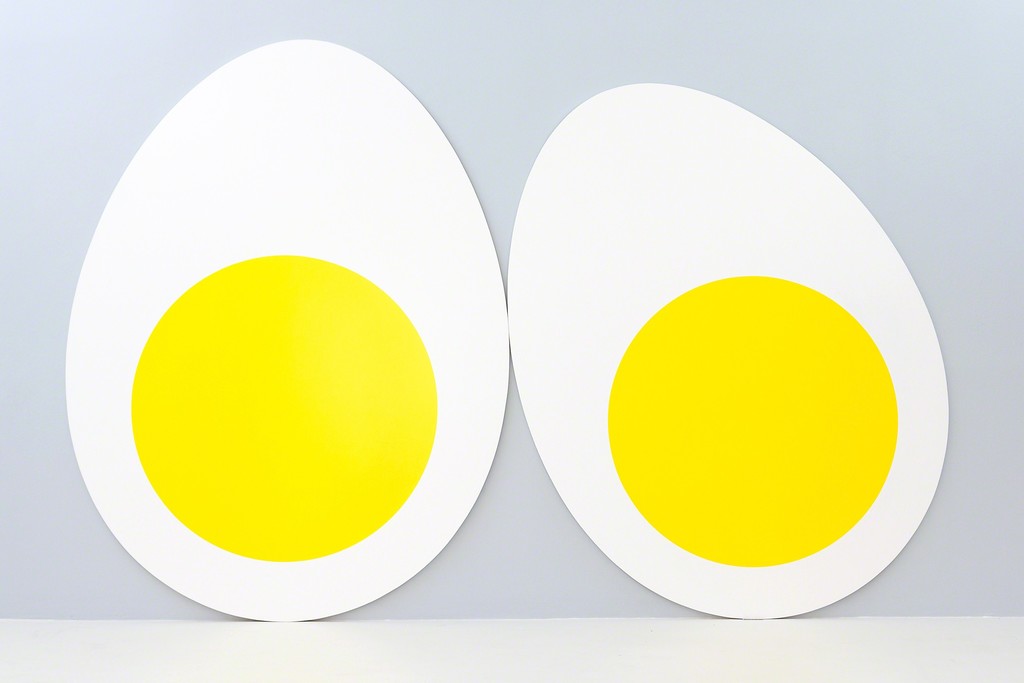 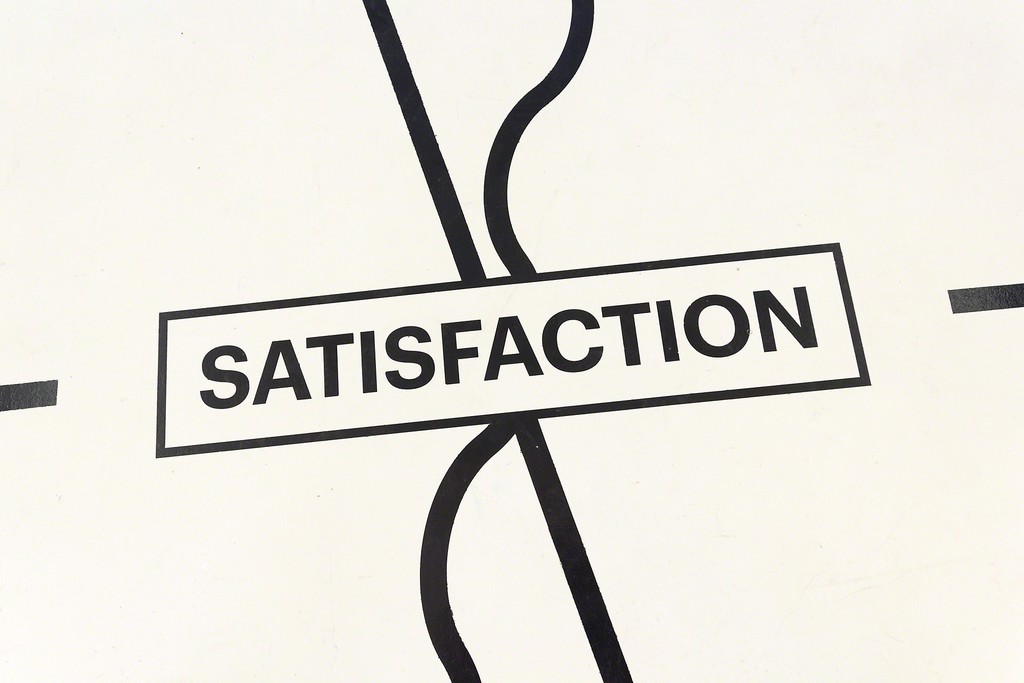 In an ideal world an ideal egg would be an ideally oval geometrical form with an ideally spherical yolk center surrounded by whites. After boiling our specimen and cutting it crossways, we would see a microscale model of the Earth's orbit around the Sun. Both systems – the cosmic one and
the human one – are closed and complementary, as the vitality of one of the parts depends on the other. Meanwhile, the space between the surface of the yolk and the shell, on a cosmic scale, is the sphere of influence between our planet its closest star. In the “Four Eggs Theory”1 the key element of illustrations is a synthetic image of half an egg – a closed system with a core and a surrounding atmosphere. This theory aims to describe an individual, though also, from a wider perspective, the cyclical and recurring process of the artistic creation of a Work. The Work is the key element of artistic Practice. At the same time, the theory described in the following text could be analyzed through an illustrating diagram. If we were to seek an analogy in our common knowledge, we ought to ask: Which came first, the chicken or the egg?

The process of making something, or, generally speaking, Work, can be divided into two parallel zones – thinking zone and effect zone. These, in turn, also divide into symmetrical departments. The sphere of cognitive reflection, or Inspiration, is everything a creatively working person apprehends through the senses: sight, touch, smell, hearing, and taste. The sphere of non-cognitive reflection, Intuition, which some would call the soul, and others instinct, is difficult to explain, sometimes irrational, and in some cases, misleading. The zone of effect, on the other hand, mirrors the thinking zone, and is also divided in two: a material part and an ephemeral part. The material effect is the Item, the thing available to the senses. With the cyclical recreation of the creation cycle, the Item can become Inspiration. The result which is intangible and unknowable is the Idea, but one which is in no way verbalized or materialized, a thing we sometimes call a “sign of the times.” The four parts of both the spheres are marked by colors, inspired by depictions of the visible color spectrum. Intuition is black (a color beyond the model that shows visible light), Inspiration is cobalt, Idea is yellow, the color of the Sun, and Item is red, a heated lump of coal.

For the Work cycle to take place, there must be interaction between the thinking zone and the effect zone. Much as with the division into two zones, this interaction is dual. It can occur in a way that is exclusively cognitive, as Rationalization, or strictly physical, as Creation. At the moment when both processes intersect, a rare but extraordinarily necessary moment happens – the Point of Satisfaction. This appears much before the ready Idea or Item, because after crossing the line that divides the sphere of reflection from the sphere of effect there is pure execution of ideas.

If I were to apply the Four Eggs Theory back upon itself, it essentially would look as follows: I have an intuitive need (Intuition) to structure the world of matter (Item) and ideas (Idea) around me, and this is why, inspired (Inspiration) by the theoretical ponderings of writers, poets, and artists,
as well as various artifacts, I think constantly about how to (Idea) communicate my knowledge in
a logical manner, e.g. through writing this text (Item). All this comes together to make the Work, which is part of a greater whole – a Practice.

(1) Given the terms we are dealing with – Intuition, Inspiration, Idea, and Item – we might equally well refer to the “Four 'I's Theory.”