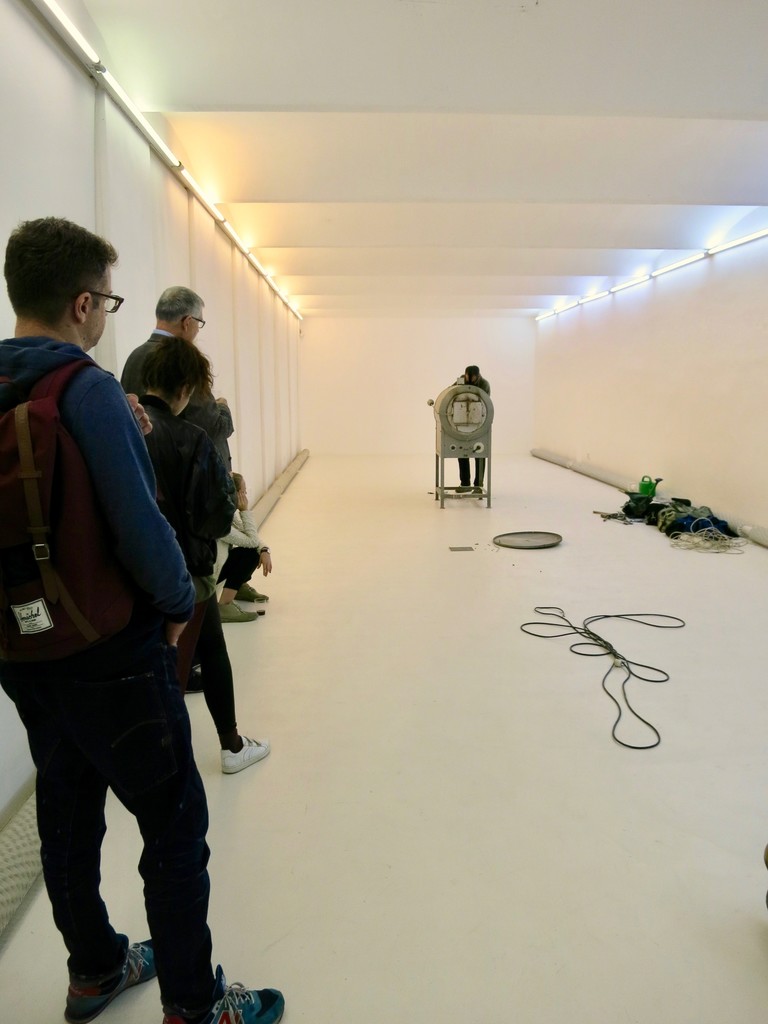 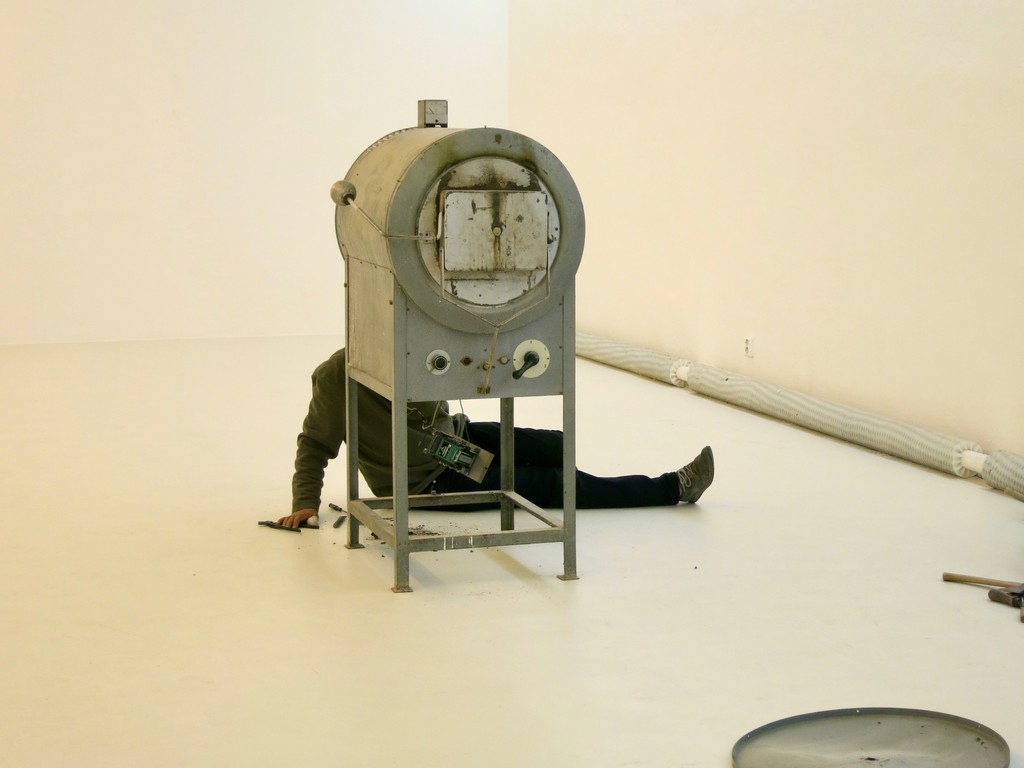 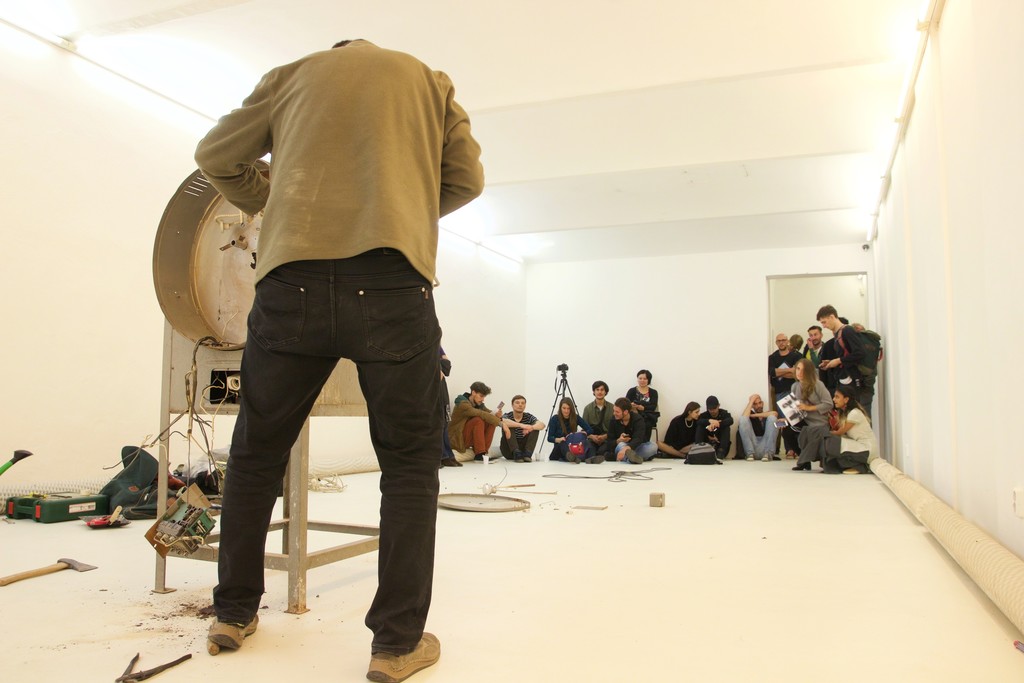 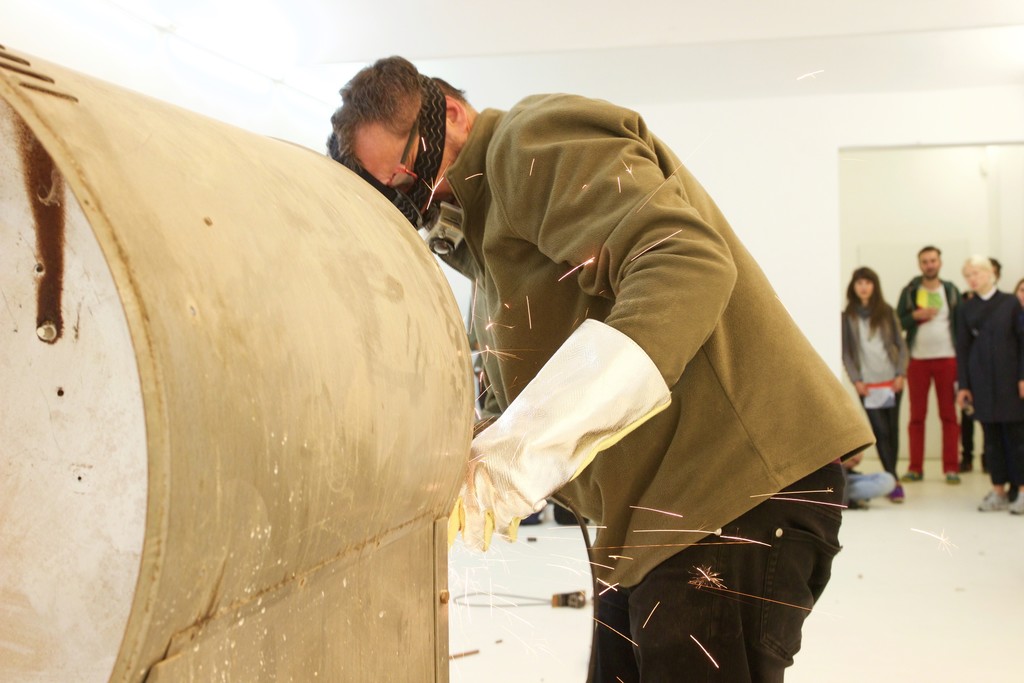 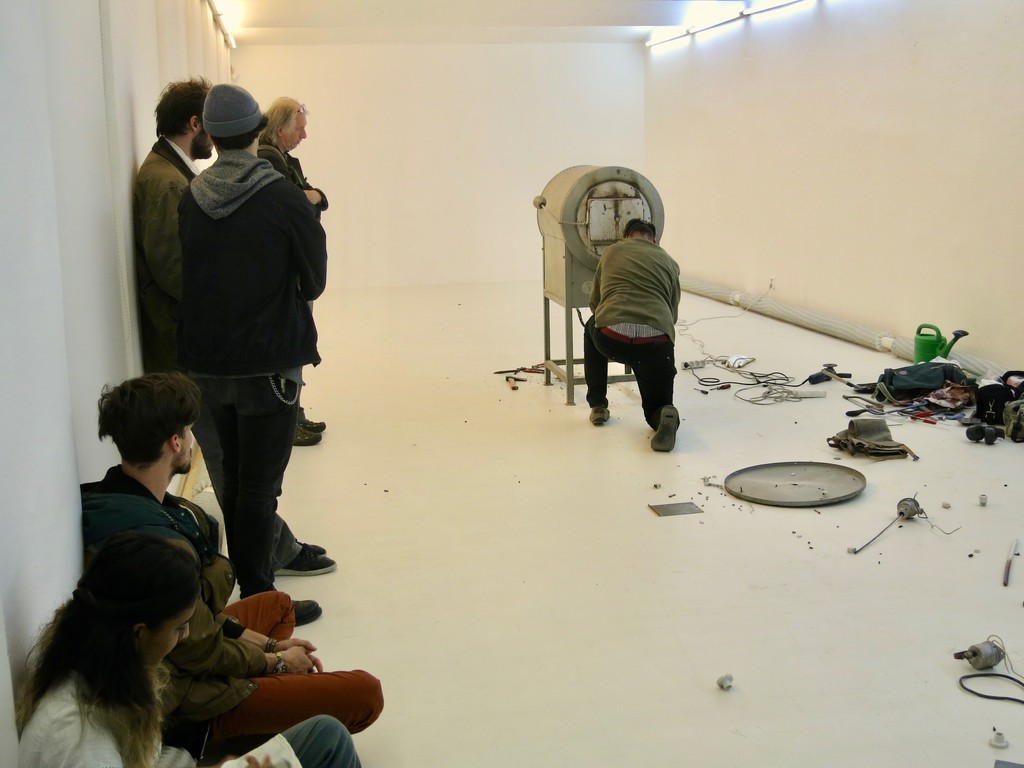 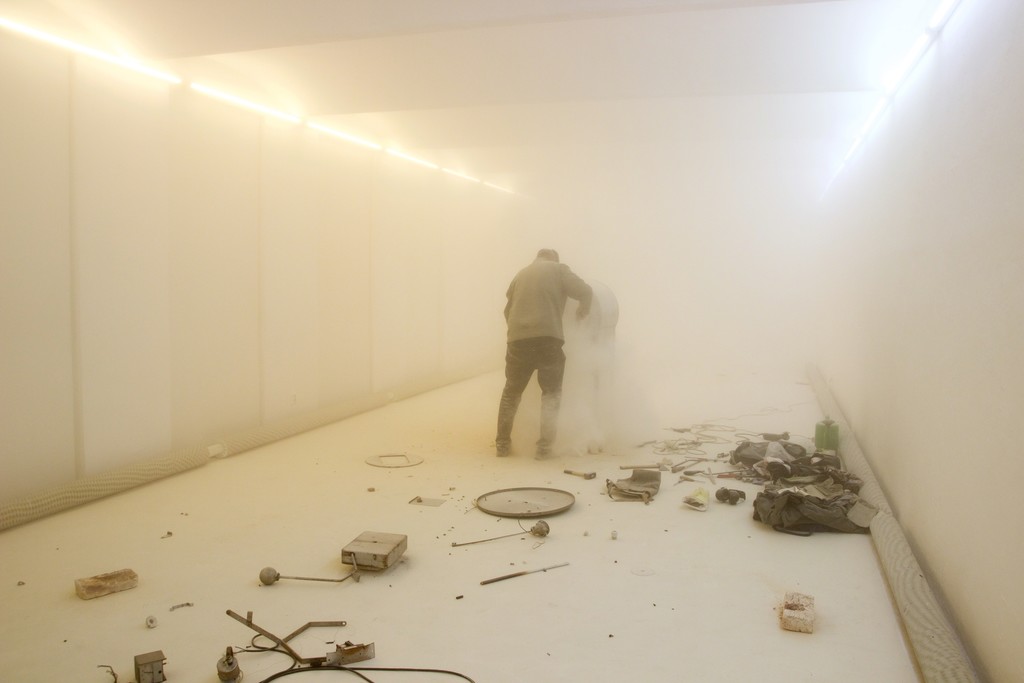 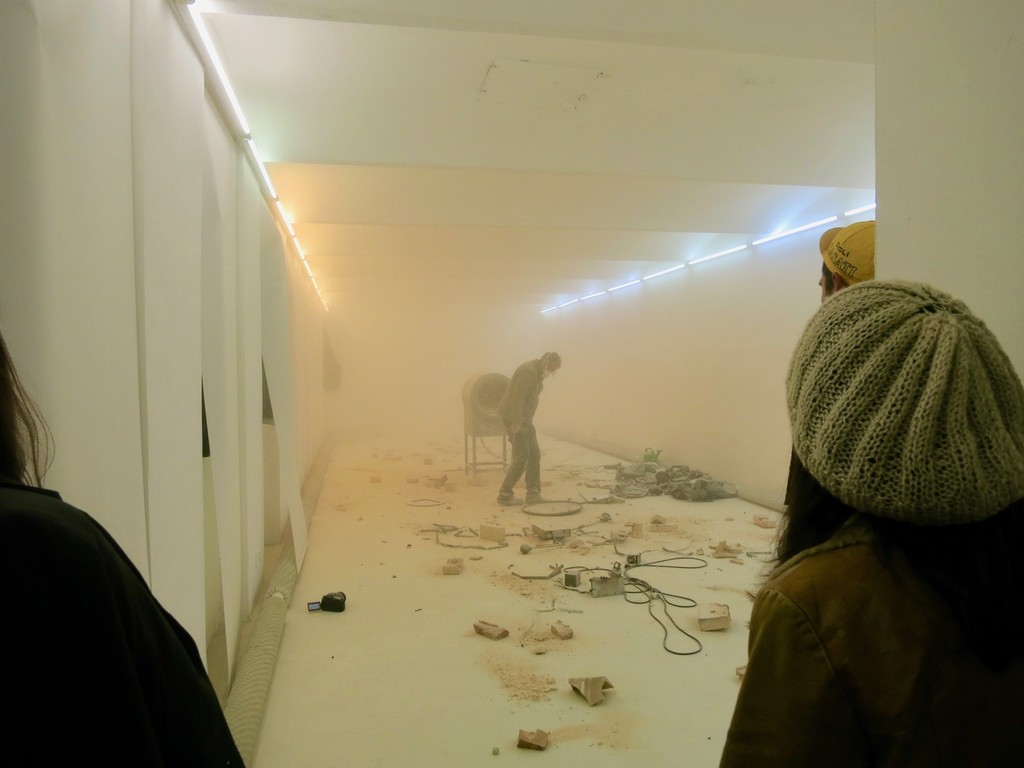 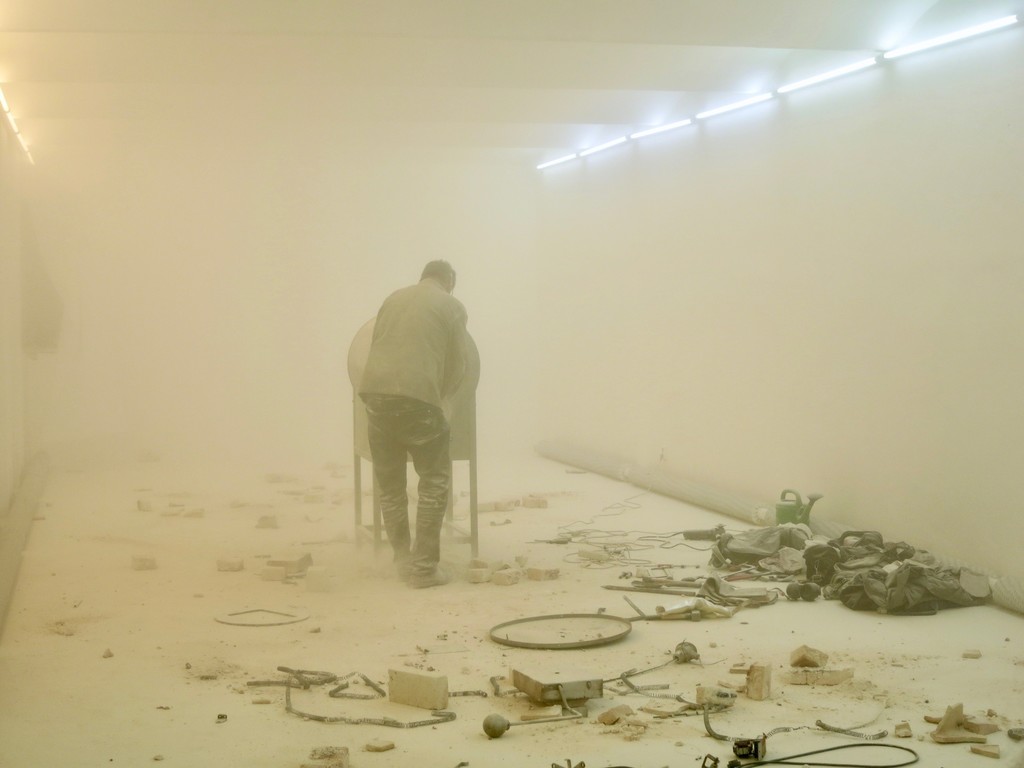 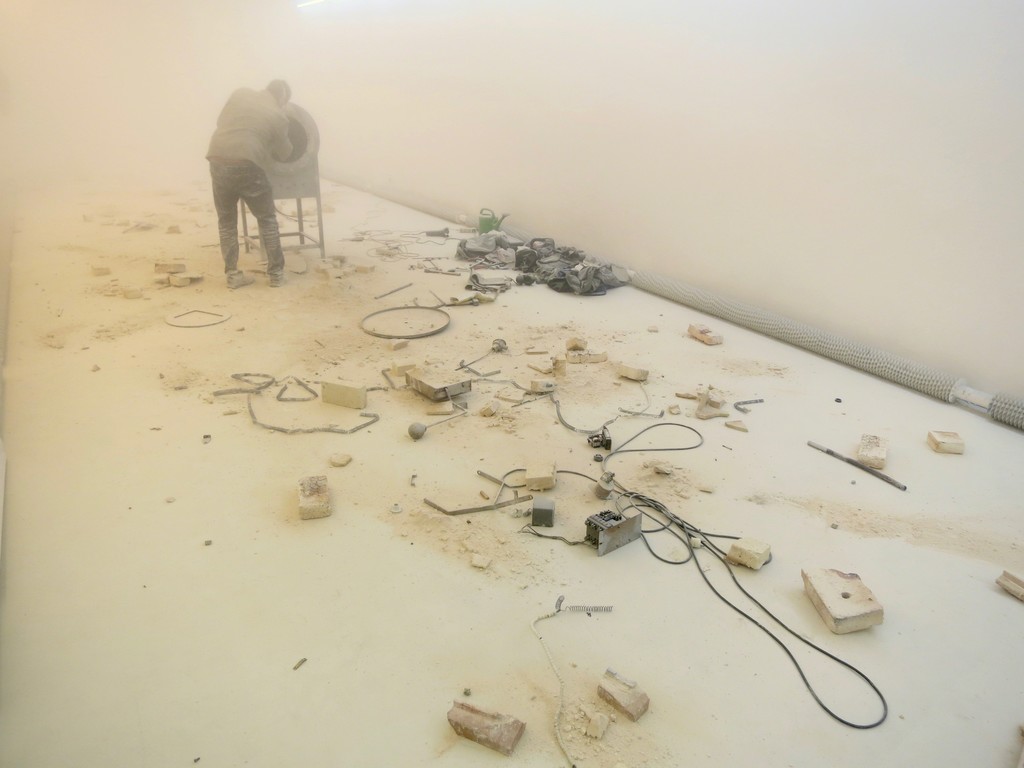 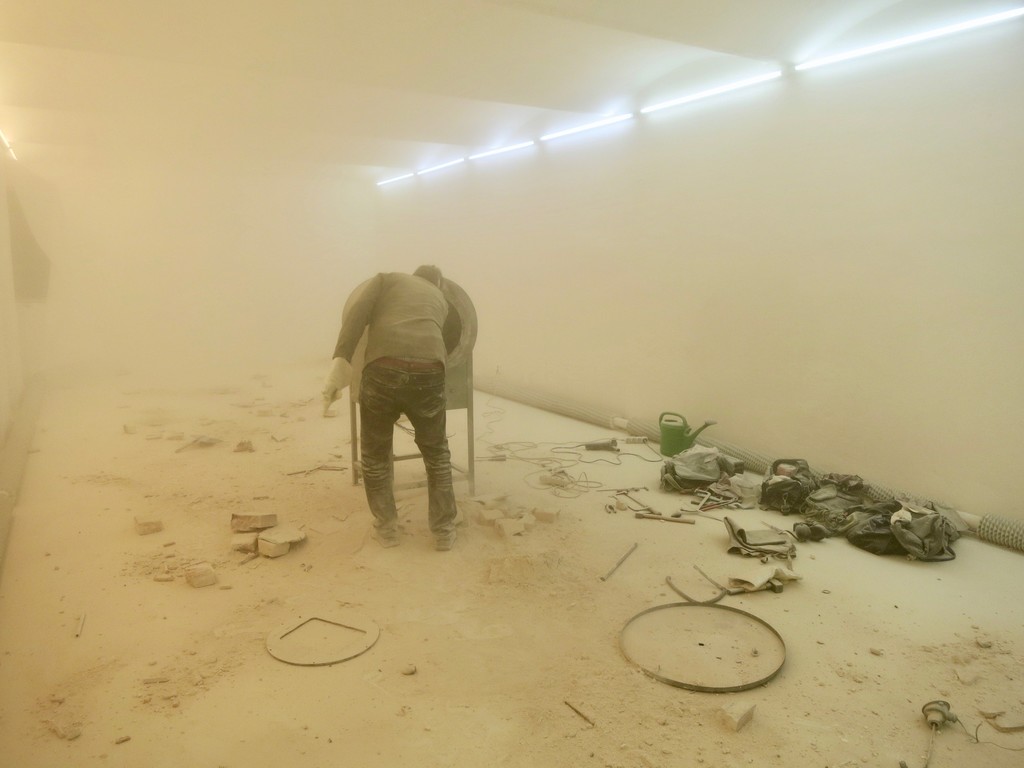 All exhibited works are new and were prepared in relation and reaction to the exhibition space of FUTURA. Only the videos series is from 1999-2000 but were never exhibited before.

Martin Zet worked from the very beginning with the dispersion of the exhibition between the upper and lower floors of the gallery. Already the title - | - vertical bar - suggests a vertical axis movement, hence a tendency towards a certain spiritual flow.

The ramp and the stairs, which complete the missing parts of the building’s original architecture, are functional and welcome to be used. Both are oddly complementary, the restoration of what is absent, similar to what happens automatically in our thoughts. This reconstruction and amalgamation is underlined by the use of raw wood that gives rise to certain aesthetic qualities. Therefore, the work is no longer simply architectonic intervention (reconstructing the forgotten use of the space for the viewer), but it is also appealing rendering it autonomous from its practical use. The strength of the work seems to draw directly from this tension about the uncertainty about its own character.

The hanging pendulums, despite their minimal quantifiable size, fill the arched room entirely with their presence. The coarseness of the hemp rope, the hardness of the tempered steel, the roughness of the non plastered bricks, and the plainness of the concrete floor all accent the reality of the pieces in the realm of room’s architecture, as they slash the space into two. The previous tension between the pragmatic and the aesthetic appears here as well. The pendulums are simultaneously these metal strings and this idealized geometry, as the straight line precisely slices the vaults of the ceiling. The material of the pieces themselves is also magical, as the scratched surface radiates the toil of thousands of hours of labor with tools. Anyways, what else than magic could be the invisible gravity that the pendulums directly exemplify.

The cast of the corpse resembles a voodoo puppet with only an empty and void shell. Despite being an equivalent copy of the artist’s body, it somehow feels smaller illustrated by the calves of the legs, which are ridiculously slim and short. This is the paradox of nonliving matter that all sculptors know. It is as though the emptiness of the inside can somehow take away part of the external presence.

In the series of videos, Martin Zet asks the respondents one sensitive question – one that we never hear stated verbally. Although it is possible to guess from the various responds almost precisely what the content of this question is, the true reflection of what occurs in the mind of filmed respondents is their lips and mouths, which imitate their thoughts physically. The mouths illustrate the effect of being asked this question from: hearing to surprise to understanding to embarrassment and finally, in spoken language again, to a reaction.

The division of the neon tubes (according to their light temperature) into two equal lines that happened on the first floor is a preparation of the space, consequently evolving into the function of a battery. The subsequent performance of Martin Zet dismantling of the white hot kiln is a final completion of the exhibition. It is the literal transfer of energy between the artist, the space, artwork, and the creative process where one element literally melted and fused with others, in addition to, a symbolic final release of the energy and light that was suspended in the lower levels.

The exhibition should be considered as an exposure in the sense of being exposed to and of functioning and experiencing, rather than consciousness and feeling. Perception is materialized here and can be explained as mutual encounter between two surfaces and cores, or better between a core via a surface touching another surface. This permeation and flux consequently presuppose a certain level of spirituality or even mystics, which is however firmly grounded in the formal, material, and plastic. The weight, temperature, resonance, conductivity, and the ability to isolate all embodies the current and emanation of energy. Martin Zet focuses on the switch between using and perceiving, or rather between blending into and emerging from the unperceived background. The art experience, therefore, arises here in a very material way ­– in the physical touch between architecture, artwork, and the viewer – by virtue of the tangible flow of energy between those three poles, which are somehow hidden behind their own surfaces.