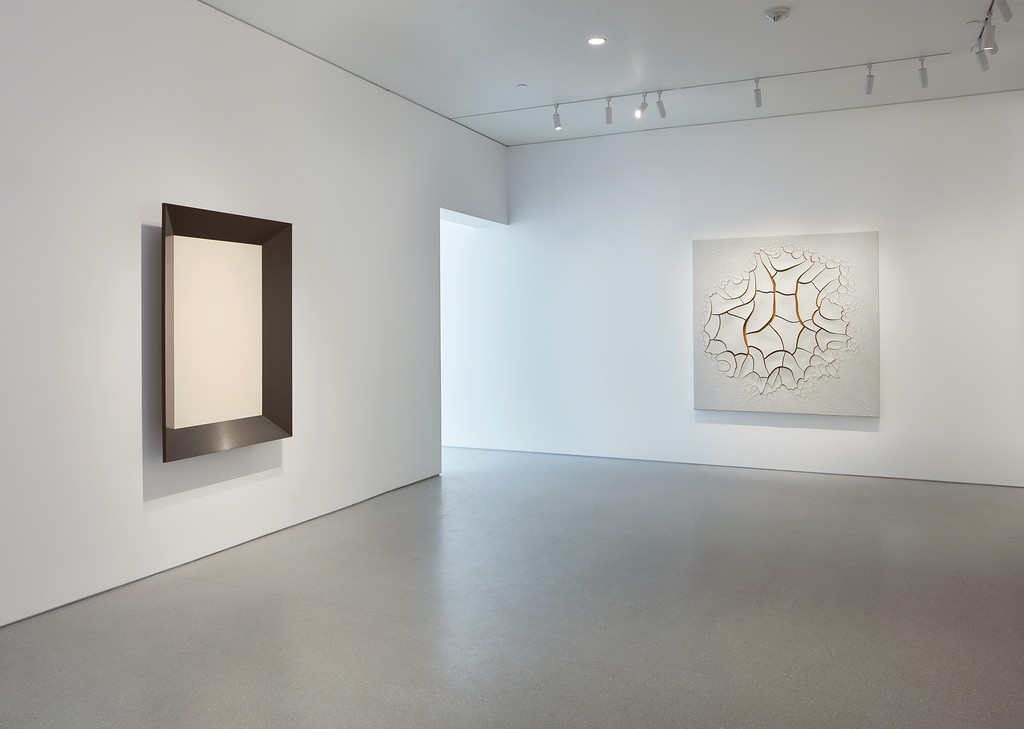 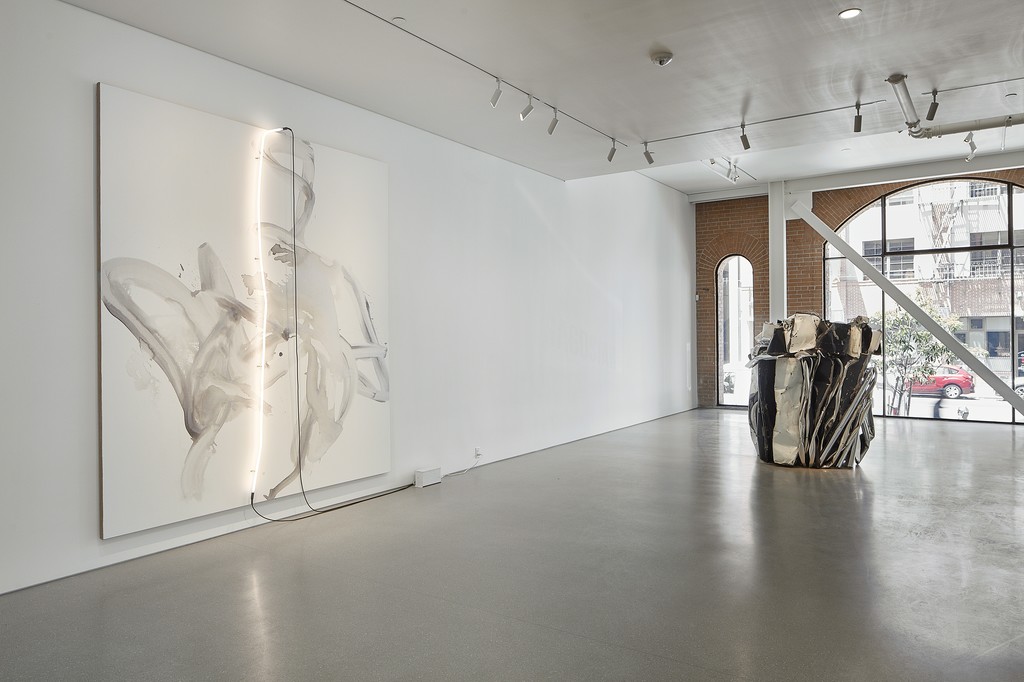 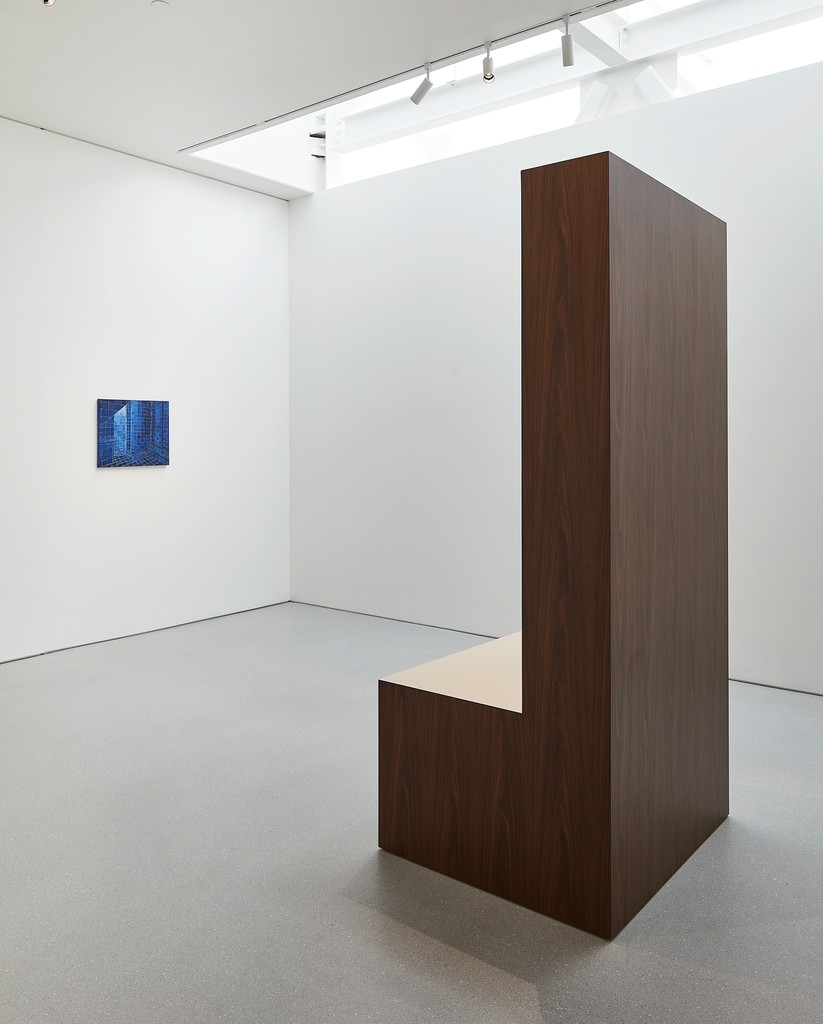 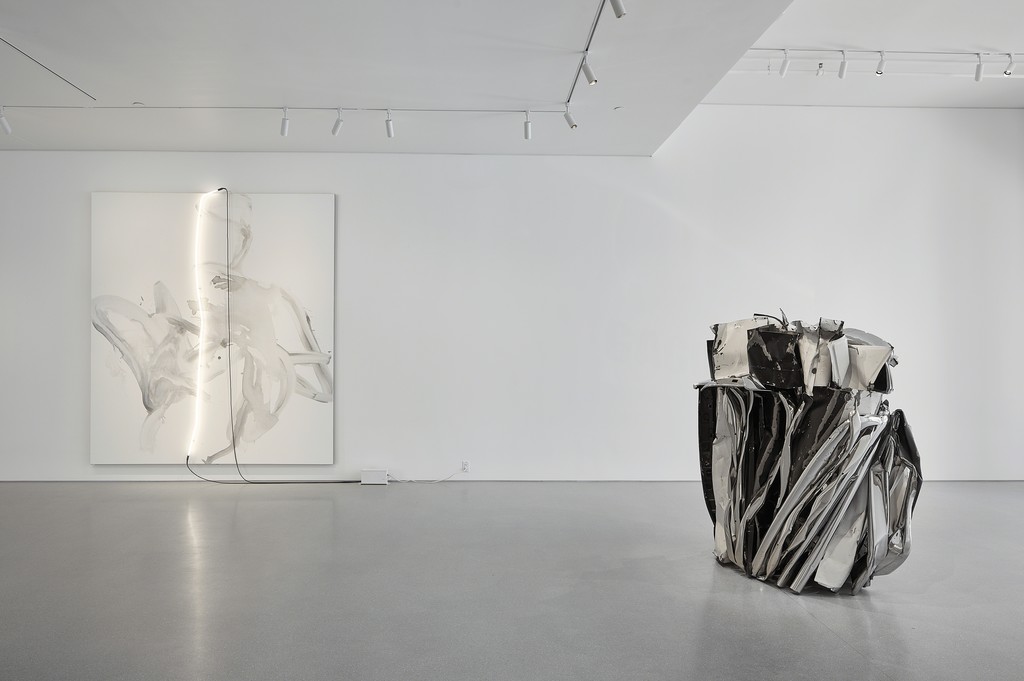 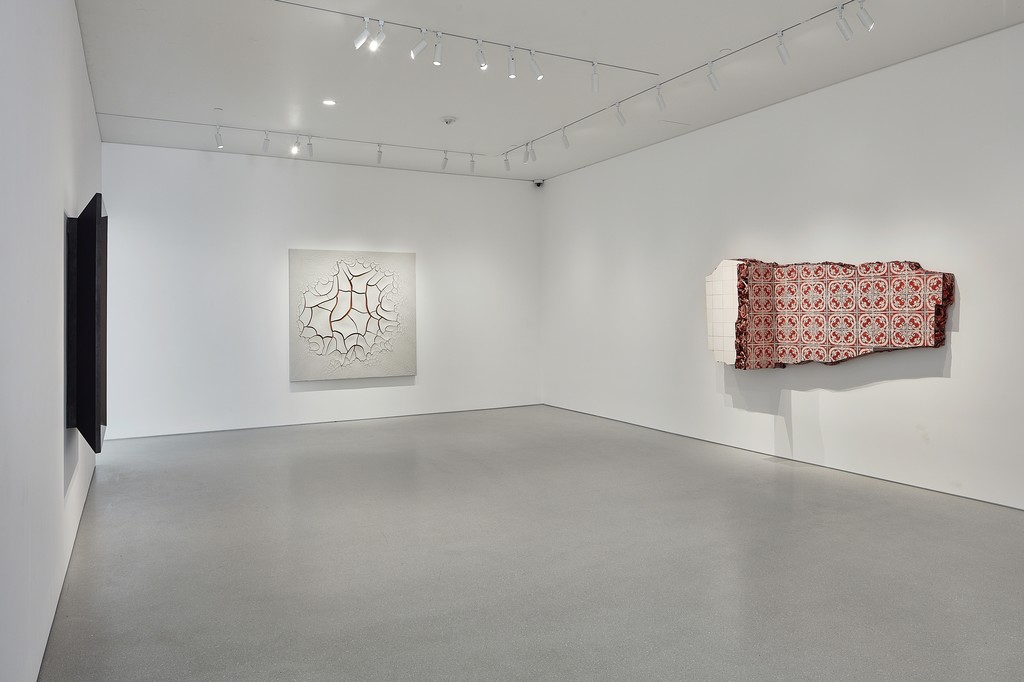 Gagosian is pleased to present Echoes, a cross-generational exhibition that pairs works by gallery artists based on generative resonance: Adriana Varejão with Richard Artschwager, Mary Weatherford with John Chamberlain, and Jeff Wall with Cy Twombly.

Two relief paintings by Varejão, made more than a decade apart, are shown with a painting and sculpture by Artschwager, both artists underscoring the agonistic nature of painterly discourse. The intricate surfaces of Varejão’s Ruína de Charque – Nova Capela (2003) and Bone-White Song (2017), which simulate broken or cracked ceramic tiles, reveal illusionistic flesh and blood within, suggesting a rather more turbulent sequel to the totalizing abstractions of modernism, while Artschwager’s Mirror (1964) and Seat of Judgment (2008) parody hard-edge modernism in surreal domestic readymades made from mimetically patterned Formica.

In a second pairing, Weatherford’s Silver Writing (2018), the first in a series of new paintings, dialogues with Chamberlain’s crumpled metal assemblage STUFFEDWITHSURPRISE (2011). While Weatherford literally electrifies her gestural abstract canvases with the cool light of neon, Chamberlain employs the found properties of automotive scrap metal in his sculptural assemblages, embracing contingency while bridging Abstract Expressionism and Pop.

Finally, Jeff Wall’s large-scale color photograph Boxing (2011) finds both coincidence and counterpoint with Cy Twombly’s painting, Death of Pompey (Rome) (1962). In Wall’s cinematically composed frame, two youths spar in the close confines of a modern living room, while Twombly’s epic work transposes an epochal assassination in Egypt into schematic notation. Both artists—one rooted in the vernacular present, the other in the classical past—stage the human drama and its histories in unique and inventive forms of narrative, myth, and apologue.

Richard Artschwager was born in 1923 in Washington, DC, and died in 2013 in Albany, New York. In 2014, Gagosian presented Richard Artschwager: No More Running Man, an exhibition of his final works, which coincided with a major touring retrospective organized by the Whitney Museum of American Art in collaboration with the Yale University Art Gallery.

John Chamberlain was born in 1927 in Rochester, Indiana, and died in 2011 in New York. John Chamberlain: Foils, an outdoor installation of two monumental aluminum foil sculptures, is on view at LongHouse Reserve in East Hampton, NY, through October 2018.

Cy Twombly was born in 1928 in Lexington, Virginia, and died in 2011 in Rome. His works have been featured in many solo museum shows over the past seventy years. In 2016, the Centre Georges Pompidou, Paris, mounted a major retrospective of more than 140 of Twombly’s works, and in 2018, Gagosian New York presented the first career-spanning exhibition of his works on paper.

Adriana Varejão was born in 1964 in Rio de Janeiro, where she lives and works. One of Brazil’s most renowned living artists, she was commissioned to produce a mural covering the facade of the Centro Aquático for the Olympics in Rio de Janeiro in 2016. In 2018, her video installation Transbarroco (2014) was installed for three nights at the John Sowden House, Los Angeles.

Jeff Wall was born in 1946 in Vancouver, Canada, where he lives and works. Solo exhibitions have been presented at institutions including Tate Modern, London; Museum of Modern Art, New York; San Francisco Museum of Modern Art; and Stedelijk Museum, Amsterdam.

Mary Weatherford was born in 1963 in Ojai, California, and lives and works in Los Angeles. In 2017, Gagosian announced representation of Weatherford, whose works reside in the permanent collections of the Brooklyn Museum, New York; Hammer Museum, Los Angeles; and National Museum of Women in the Arts, Washington, DC. On September 13, Gagosian will present I’ve seen gray whales go by, Weatherford’s first exhibition with the gallery, at 555 West 24th Street, New York.