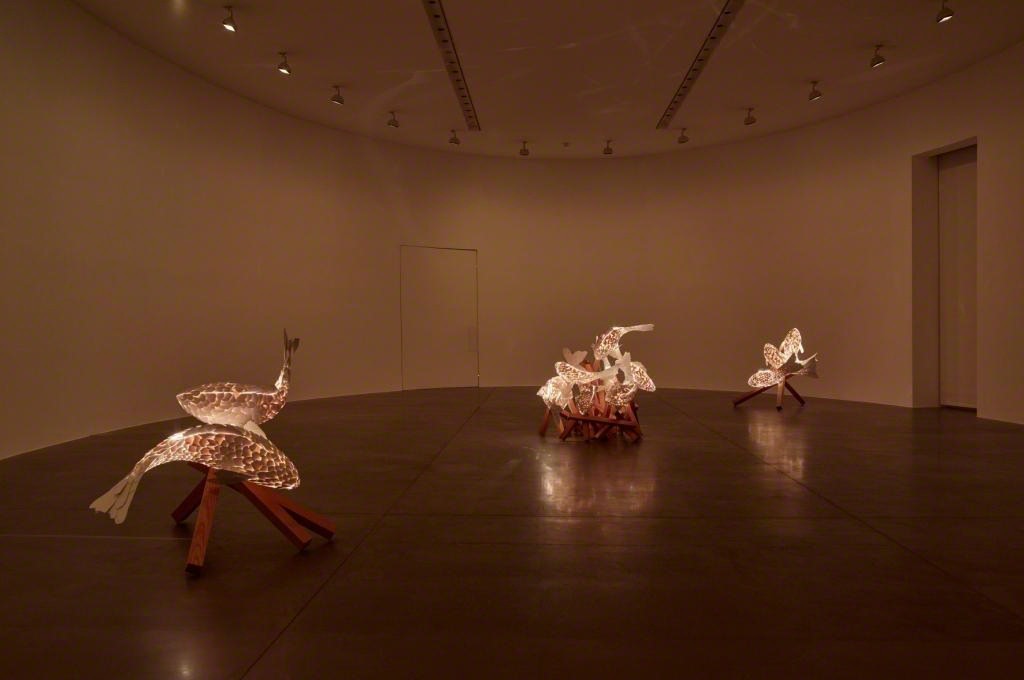 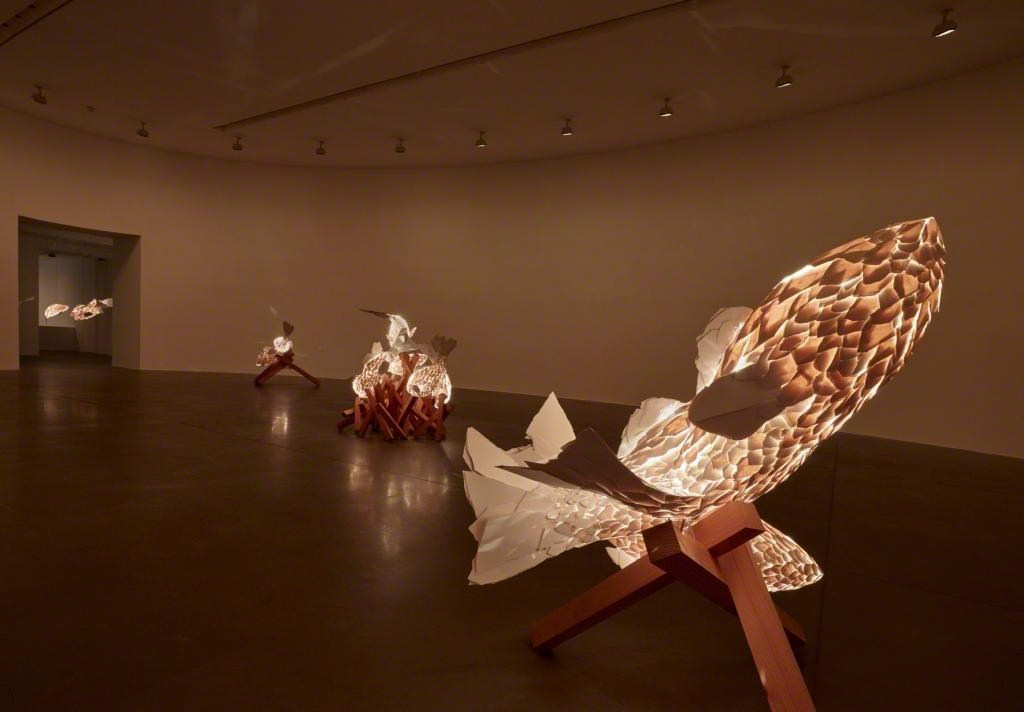 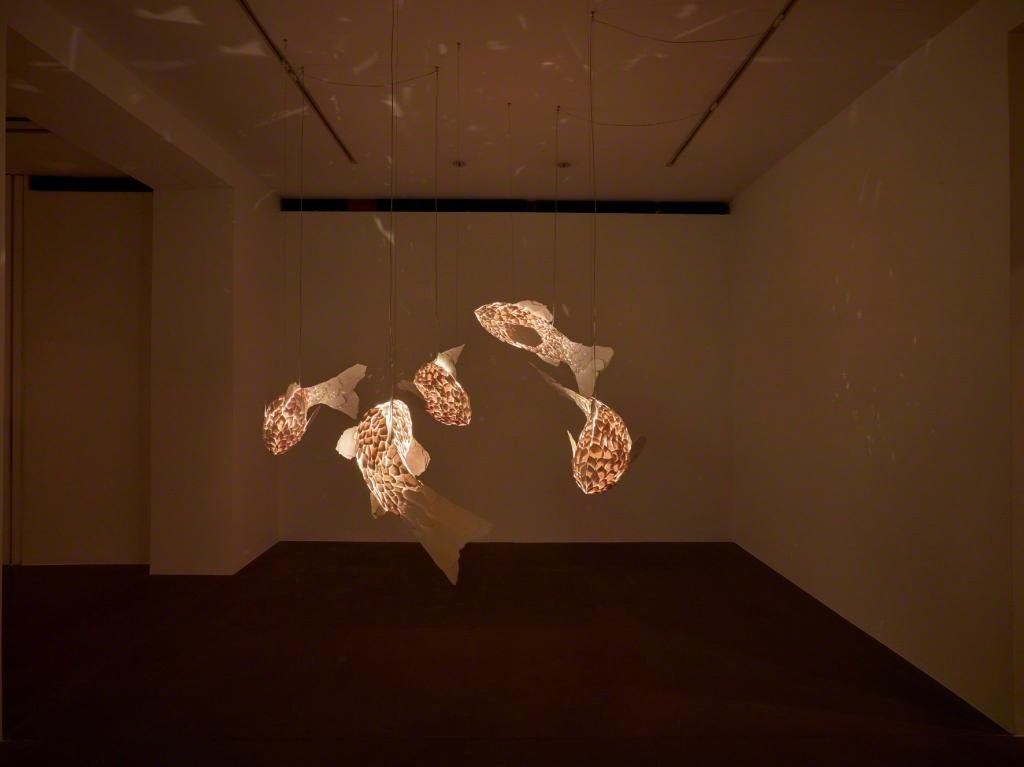 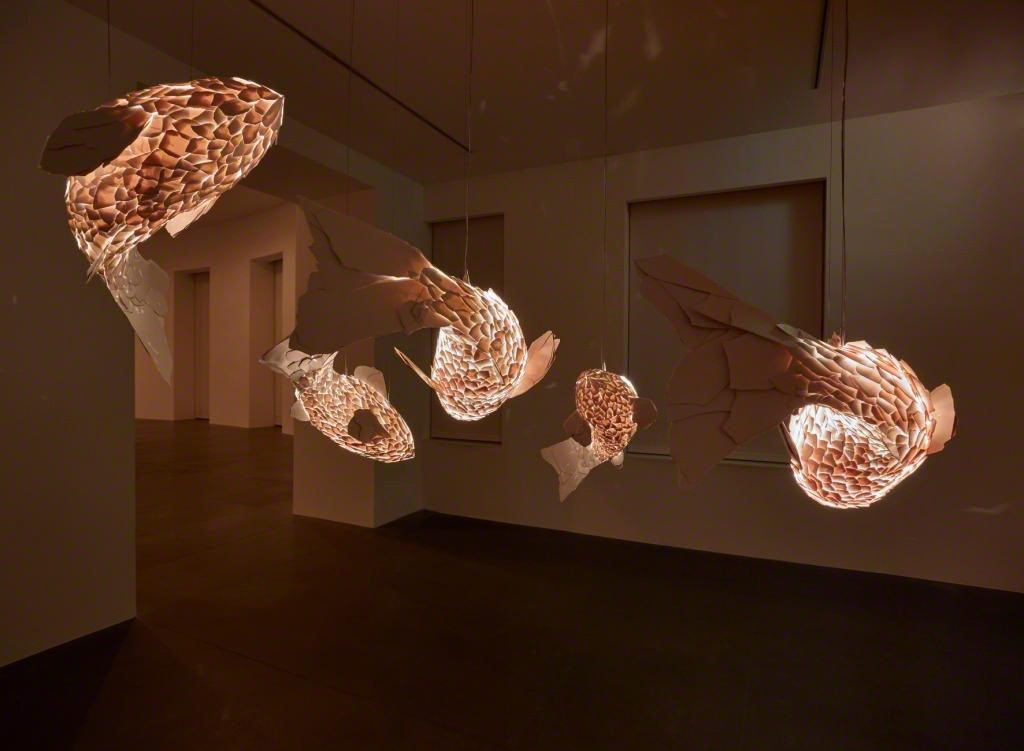 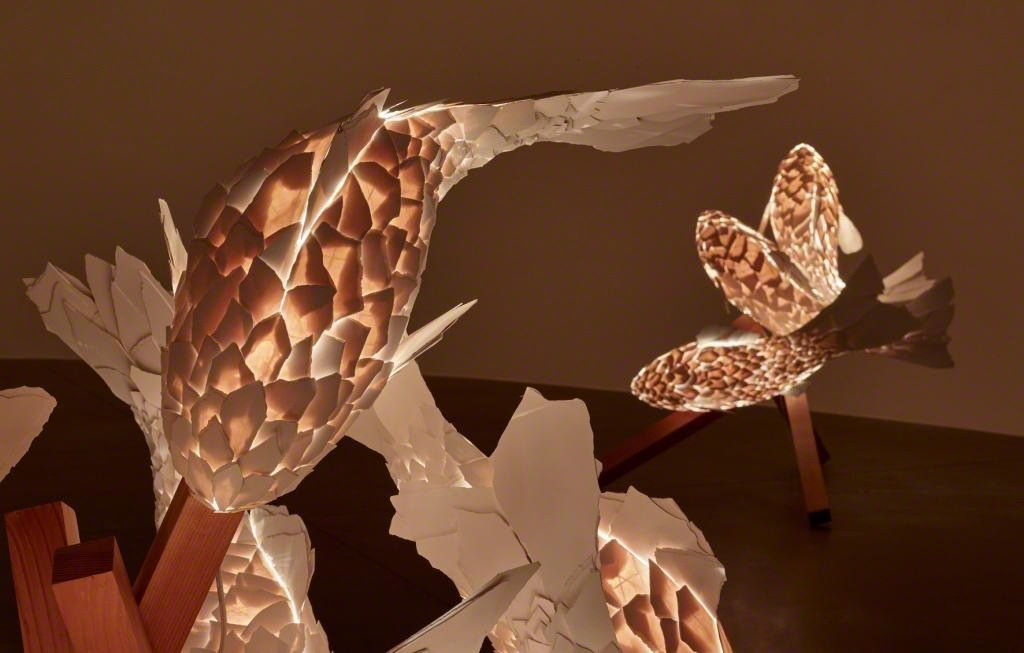 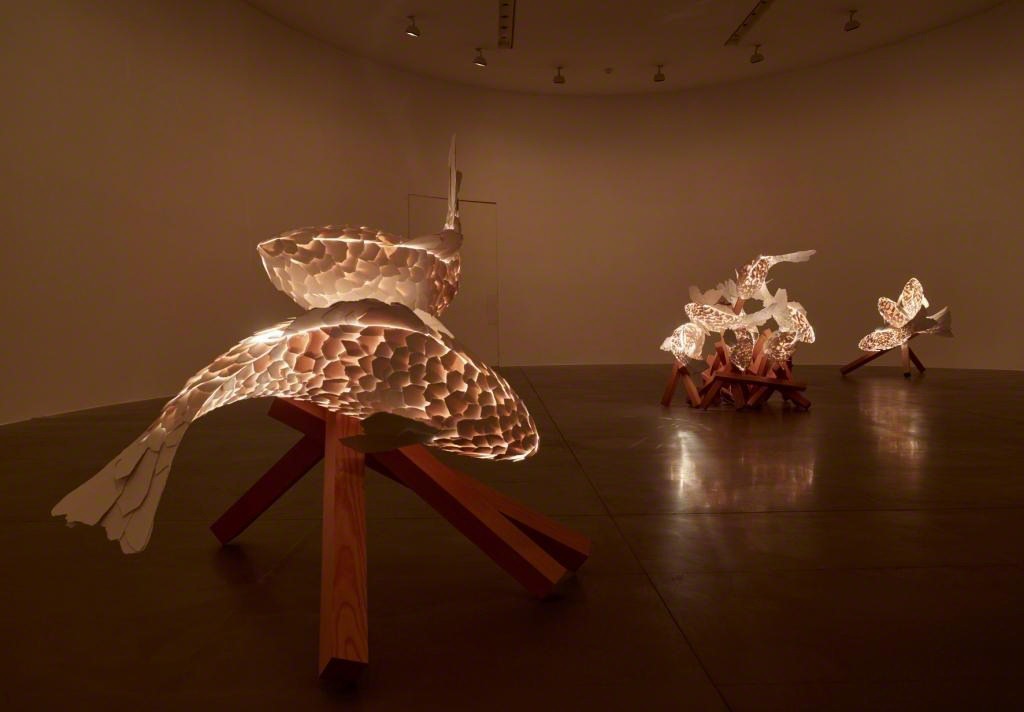 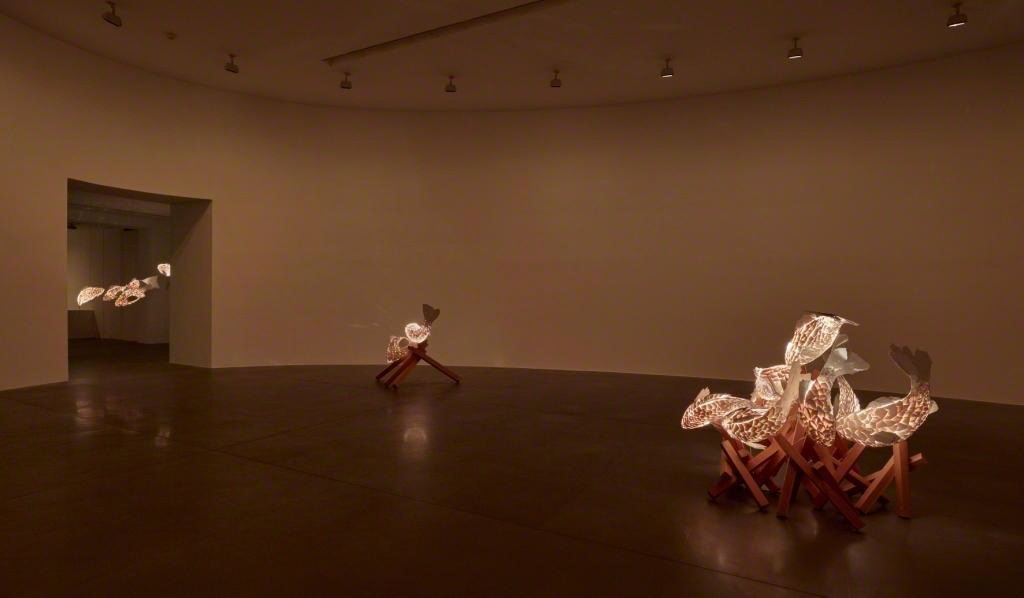 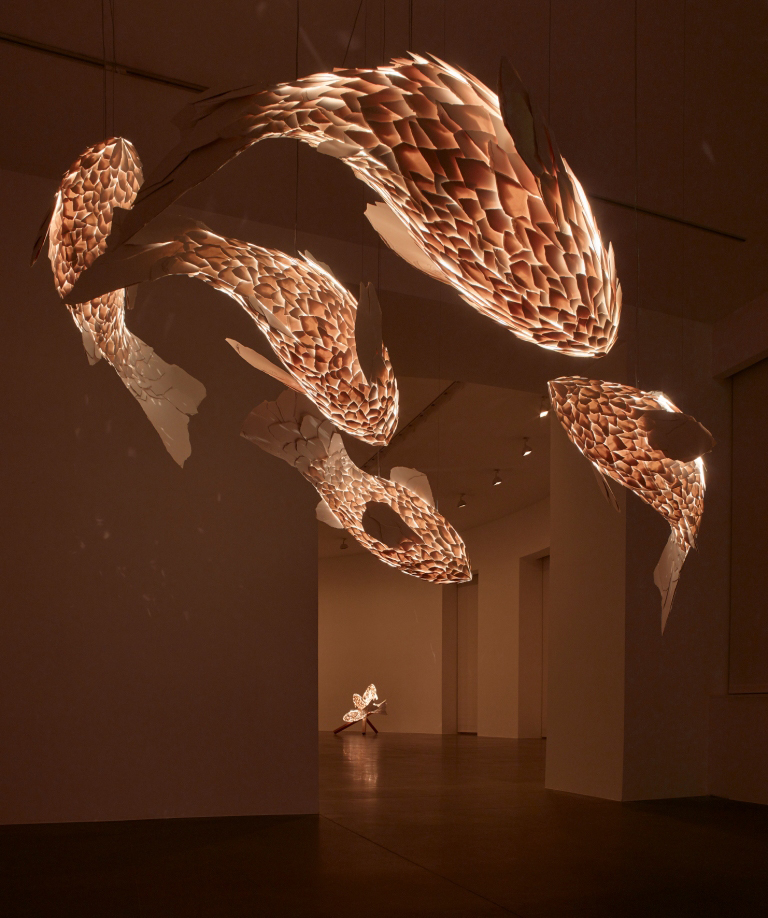 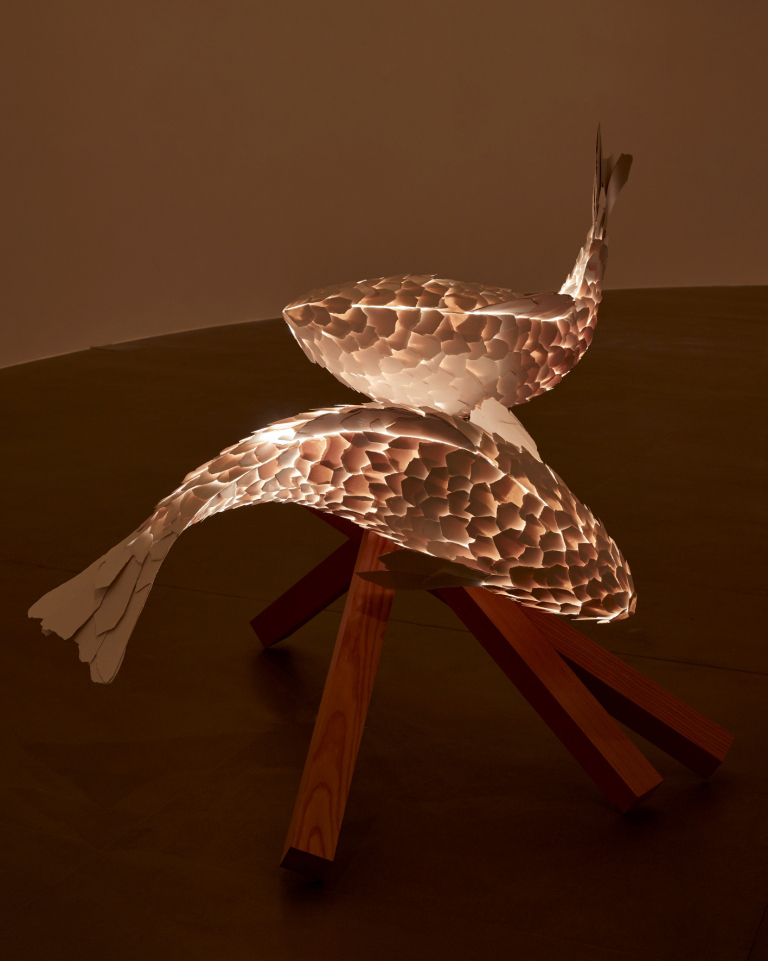 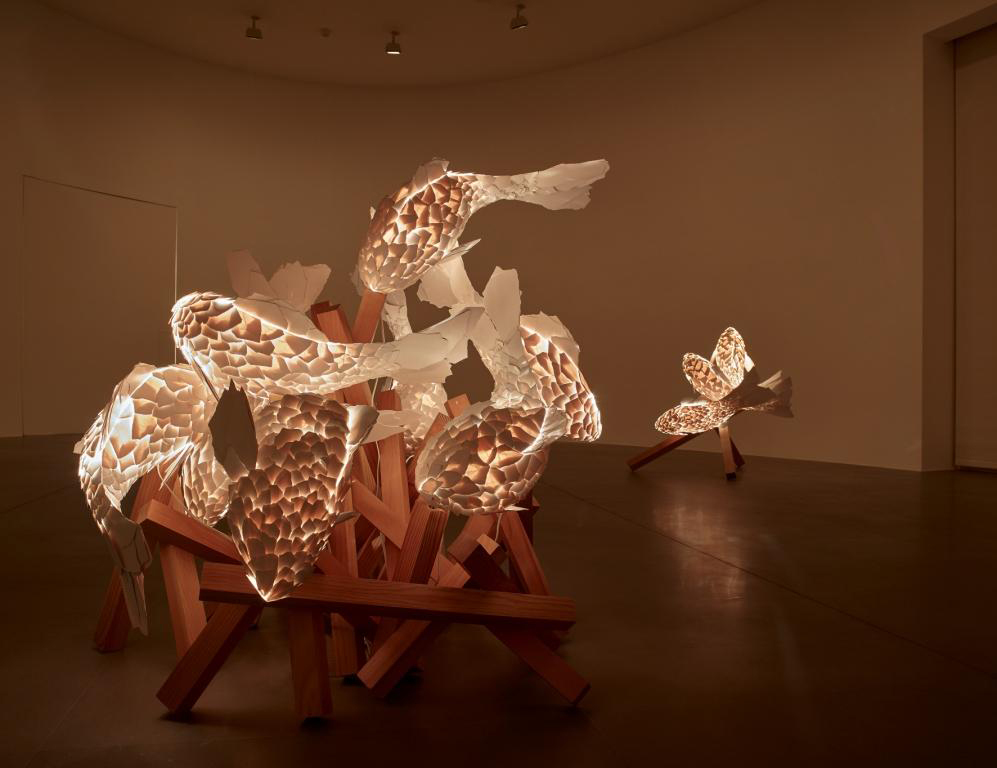 The fish is a perfect form.
—Frank Gehry

One of the most celebrated architects living today, Gehry’s career spans six decades and three continents. Known for his imaginative designs and creative use of materials, he has forever altered the urban landscape with spectacular buildings that are conceived as dynamic structures rather than static vessels.

Gehry has always experimented with sculpture and furniture in addition to his architectural pursuits, coaxing inventive forms out of unexpected materials, from the Easy Edges (1969–73) and Experimental Edges (1979–82)—chairs and tables carved from blocks of industrial corrugated cardboard—to the Knoll furniture series (1989–92), fashioned from bentwood. The Fish Lamps evolved from a 1983 commission by the Formica Corporation to create objects from the then-new plastic laminate ColorCore. After accidentally shattering a piece of it while working, Gehry was inspired by the shards, which reminded him of fish scales. The first Fish Lamps, which were shown in “Frank Gehry: Unique Lamps” in 1984 at Gagosian Los Angeles, employed wire armatures molded into fish shapes, onto which shards of ColorCore are individually glued, creating clear allusions to the morphic attributes of real fish.

Since the creation of the first lamp in 1984, Gehry’s Fish Lamps have been exhibited in London, Paris, Hong Kong, and now Rome. The fish has become a recurrent motif in Gehry’s work, as much for its “good design” as for its iconographical and natural attributes. Its quicksilver appeal informs the undulating, curvilinear forms of the Guggenheim Museum in Bilbao, Spain (1997); the Jay Pritzker Pavilion in Chicago (2004); and the Marqués de Riscal Vineyard Hotel in Elciego, Spain (2006), as well as the Fish Sculpture at Vila Olímpica in Barcelona (1989–92) and Standing Glass Fish for the Minneapolis Sculpture Garden (1986).

In 2012 Gehry decided to revisit his earlier ideas, and began working on an entirely new group of Fish Lamps. The resulting works range in scale from life-size to outsize, and the use of ColorCore is bolder, incorporating larger and morejagged elements. The sculptures are each unique, and each made by hand.

The softly glowing Fish Lamps are full of whimsy and vigor. Curling and flexing in attitudes of simulated motion, these artificial creatures emit a warm, incandescent light. This intimation of life, underscored by the almost organic textures of the nuanced surfaces, presents a spirited symbiosis of material, form, and function.

Frank Gehry was born in Toronto in 1929. He studied architecture at the University of Southern California and urban planning at the Harvard Graduate School of Design. His drawings, models, designs, and sculpture have been exhibited in major museums throughout the world. Among his most celebrated buildings are the Vitra Design Museum, Weil am Rhein, Germany (1989); the Guggenheim Museum, Bilbao, Spain (1997); and the Walt Disney Concert Hall, Los Angeles (2003). Awards include the Pritzker Architecture Prize (1989); the Wolf Foundation Prize in Arts (1992); the Praemium Imperiale in Architecture from Japan Art Association (1992); the Dorothy and Lillian Gish Prize (1994); the National Medal of Arts (1998); the Gold Medal from the American Institute of Architects (1999); the Gold Medal from the Royal Institute of British Architects (2000); and the Lifetime Achievement Award from Americans for the Arts (2000).

For further inquiries please contact the gallery at +39.06.4208.6498 or at [email protected]. All images are subject to copyright. Gallery approval must be granted prior to reproduction.