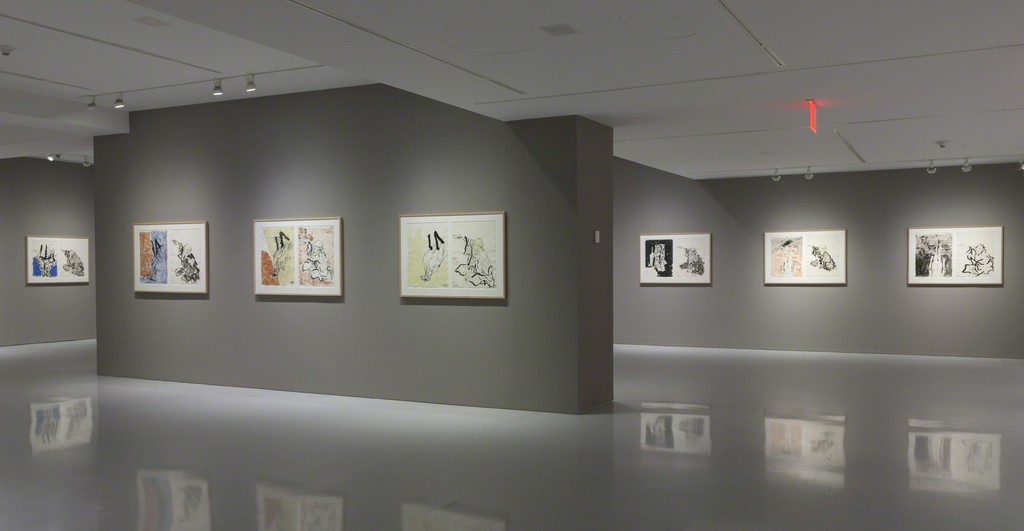 Drawing has always been central to Baselitz’s art. Parallel to his cerebral yet impassioned paintings and roughly hewn sculptures, the practice of drawing is a test-site for assimilation and disorientation in his oeuvre. In a new series of two-part ink drawings, Baselitz is “visited” by Katsushika Hokusai (1760–1849), whose exquisitely controlled color-woodblock prints epitomized the refined ukiyo-e genre in Japanese art and persist in the popular imagination today.

In each diptych, Baselitz pairs reconsidered motifs from his own work with iterations—in ink with blue, yellow or green watercolor washes—of an intimate late work by Hokusai, a wry self-portrait sketched at the end of a letter to his print publisher in 1842. The letter accompanied a group of prints made forty years earlier, which the Japanese master described to his publisher as repetitive, unresolved, and immature. He signed it with his pseudonym of the day: “Sincerely yours, the eighty-three year old Hachiemon.”

The message of Hokusai’s letter is that perfection comes with age and hindsight. Paired with his confidently drawn self-portrait as a mischievous old man, this poignant gesture from the elderly artist evidently provides inspiration across time and culture for Baselitz's own pursuit of newness and transformation while continuing to reflect on his own life and mortality.

The exhibition is accompanied by a fully illustrated publication with an essay by John-Paul Stonard.