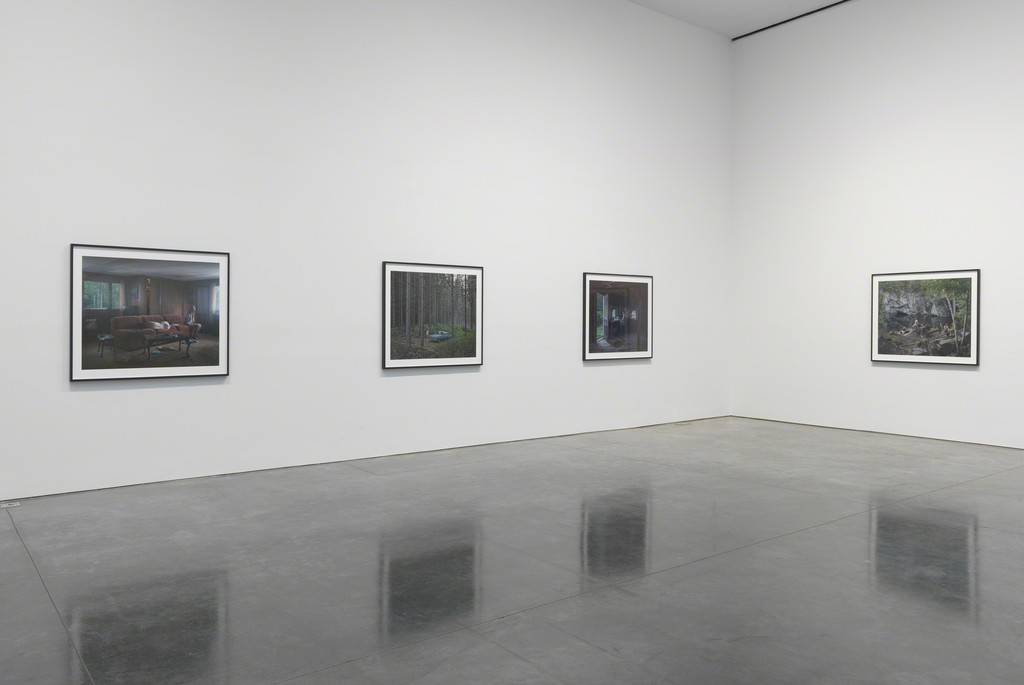 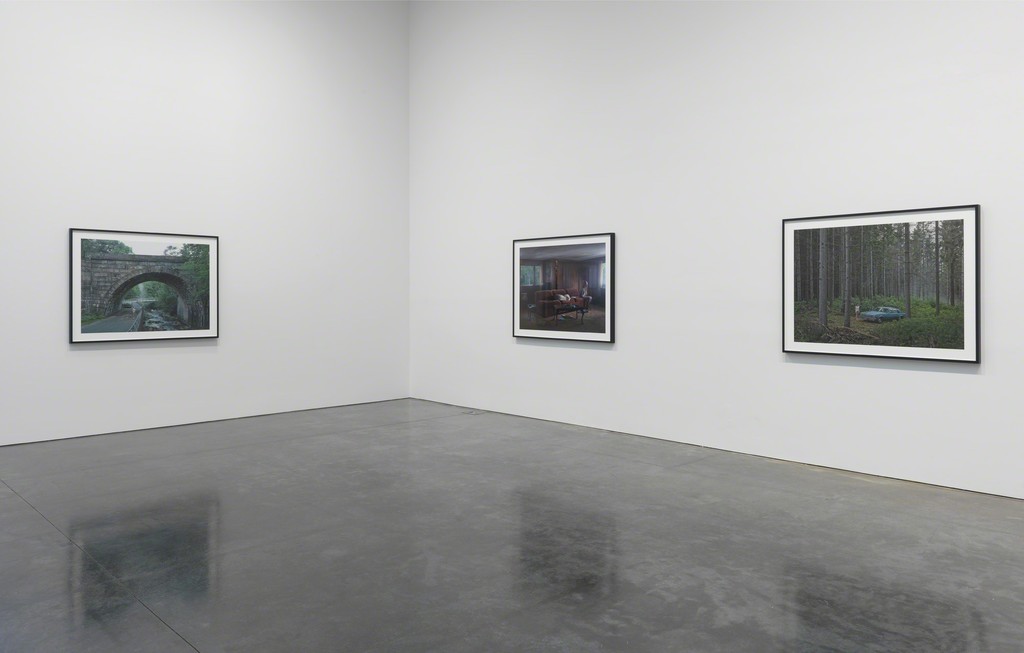 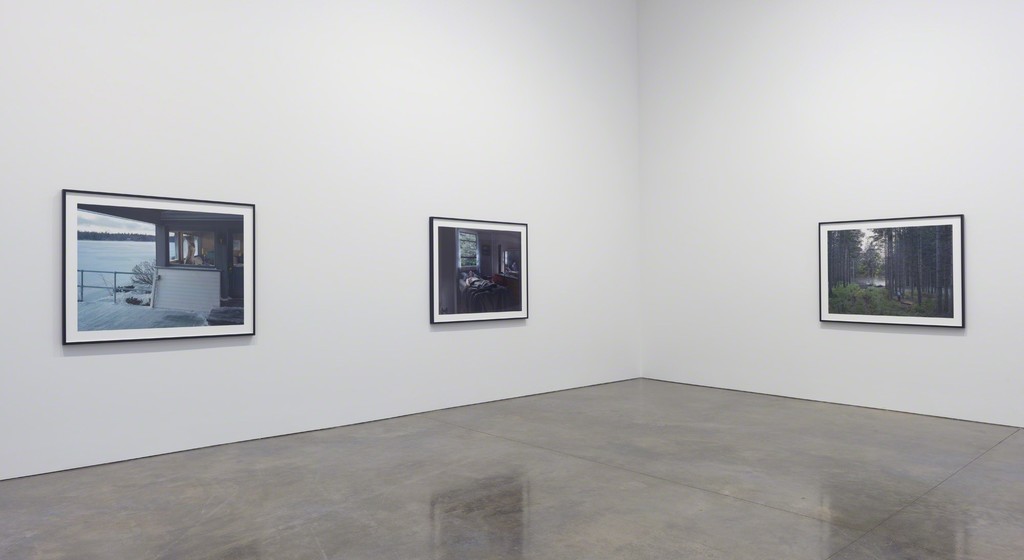 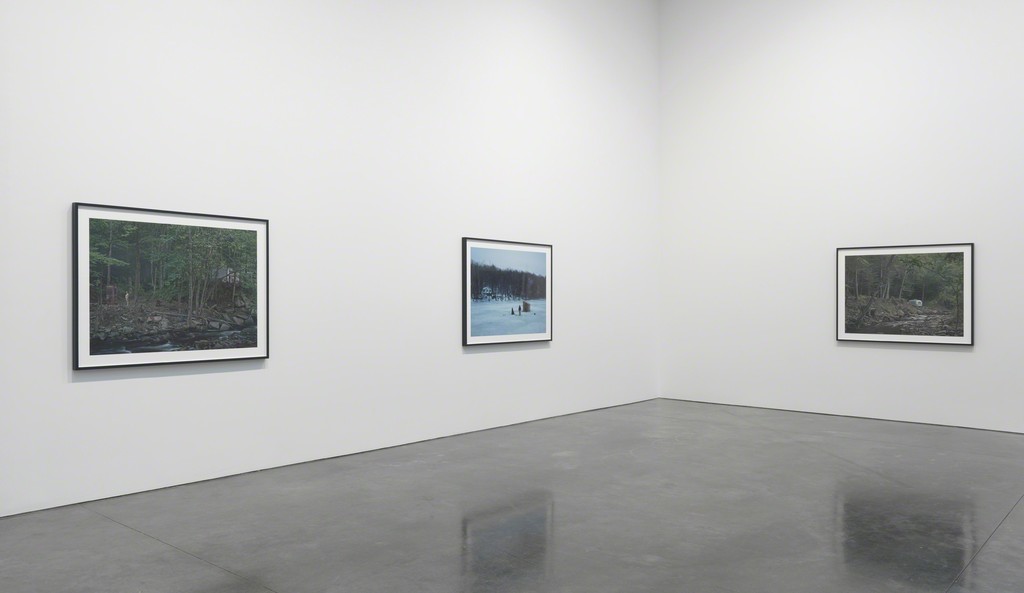 It was deep in the forests of Becket, Massachusetts that I finally felt darkness lift, experienced a reconnection with my artistic process, and moved into a period of renewal and intense creative productivity.
—Gregory Crewdson

Cathedral of the Pines (2013–14) was made during three productions in and around the rural town of Becket, Massachusetts. In images that recall nineteenth-century American and European paintings, Crewdson photographed figures in the surrounding forests, including the actual trail from which the series takes its title. Interior scenes charged with ambiguous narratives probe tensions between art, life, connection and separation, intimacy and isolation.

The series comprises thirty-one digital pigment prints, each measuring 45 × 58 inches framed. In Woman at Sink, a woman pauses from her household upkeep, lost in thought. In Pickup Truck, Crewdson portrays a nude couple in the flatbed of a truck in a dense forest—the woman seated, the man turned away in repose. Crewdson situates his disconsolate subjects in familiar settings, yet their cryptic actions—standing still in the snow, or nude on a riverbank—hint at invisible challenges. Precisely what these challenges are, and what fate awaits these anonymous figures, are left to the viewer's imagination.

For more than twenty years, Crewdson has used the streets and interiors of small-town America as settings for photographic incarnations of the uncanny. Working with a crew, he plans his images as meticulously as any movie director, from the nocturnal Twilight series (1998–2002); to the cerebral Beneath the Roses (2003–08); to Sanctuary (2009). His careful crafting of visual suspense conjures forebears such as Diane Arbus, Alfred Hitchcock, and Edward Hopper. In Cathedral of the Pines, Crewdson's persistent psychological leitmotifs evolve into intimate figurative dramas.

A fully-illustrated book with an essay by art historian Alexander Nemerov will be released by Aperture in conjunction with the exhibition.

For further information please contact the gallery at [email protected] or at +1.212.741.1717. All images are subject to copyright. Gallery approval must be granted prior to reproduction.