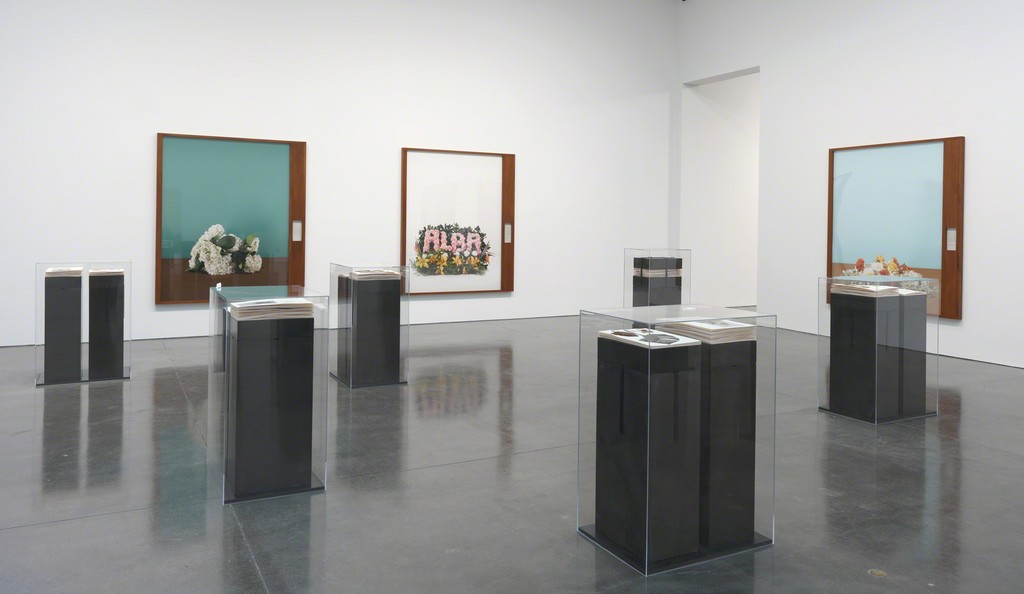 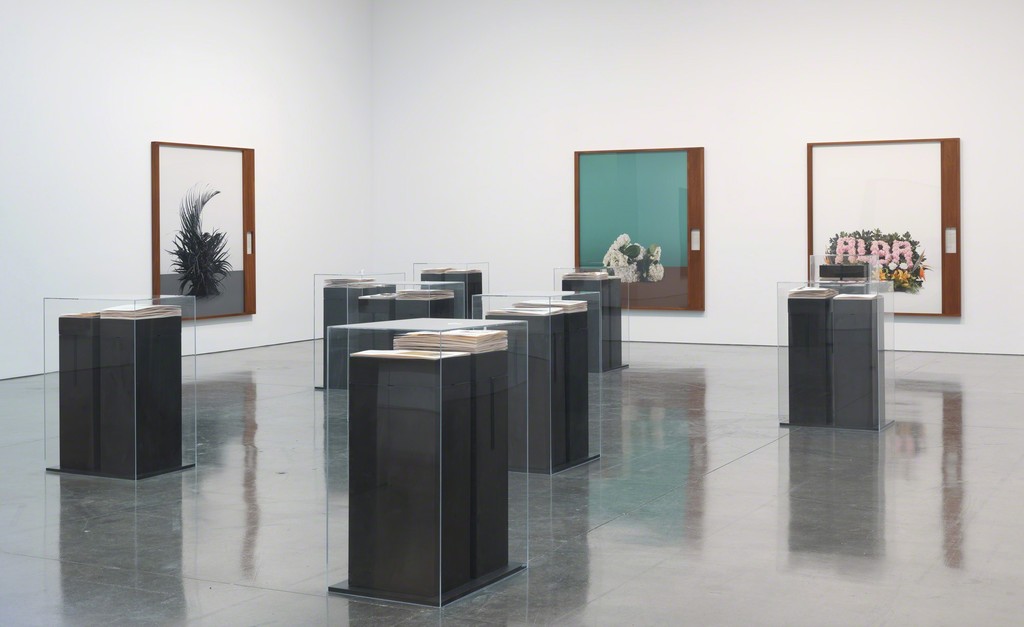 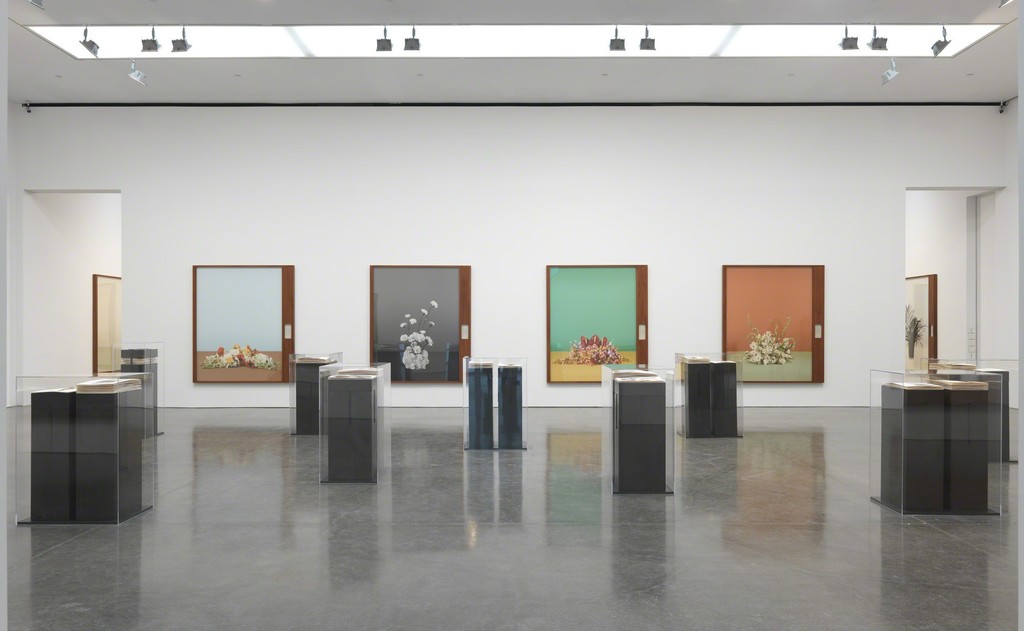 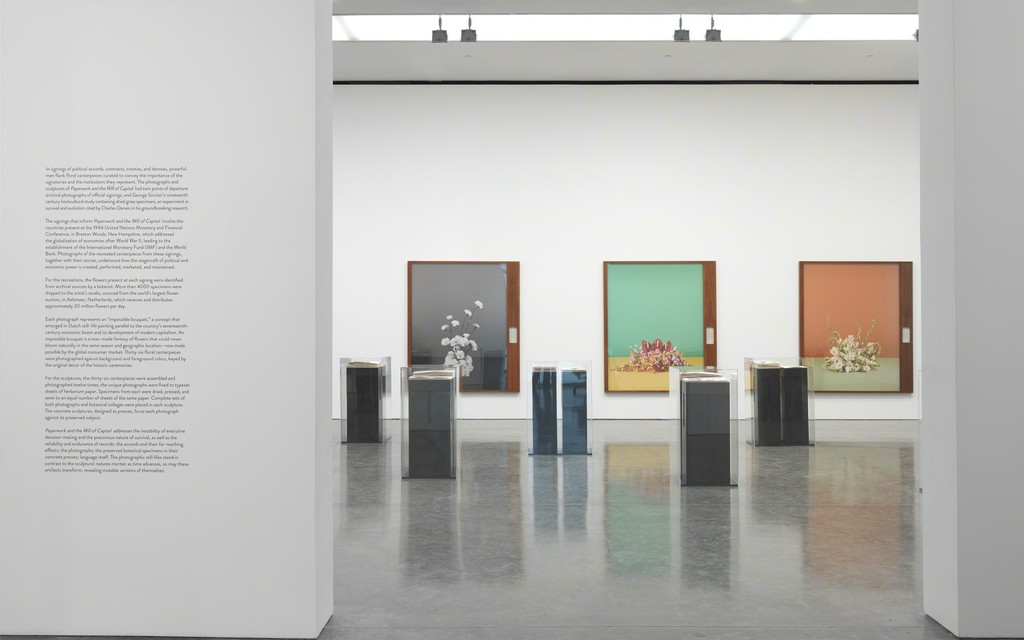 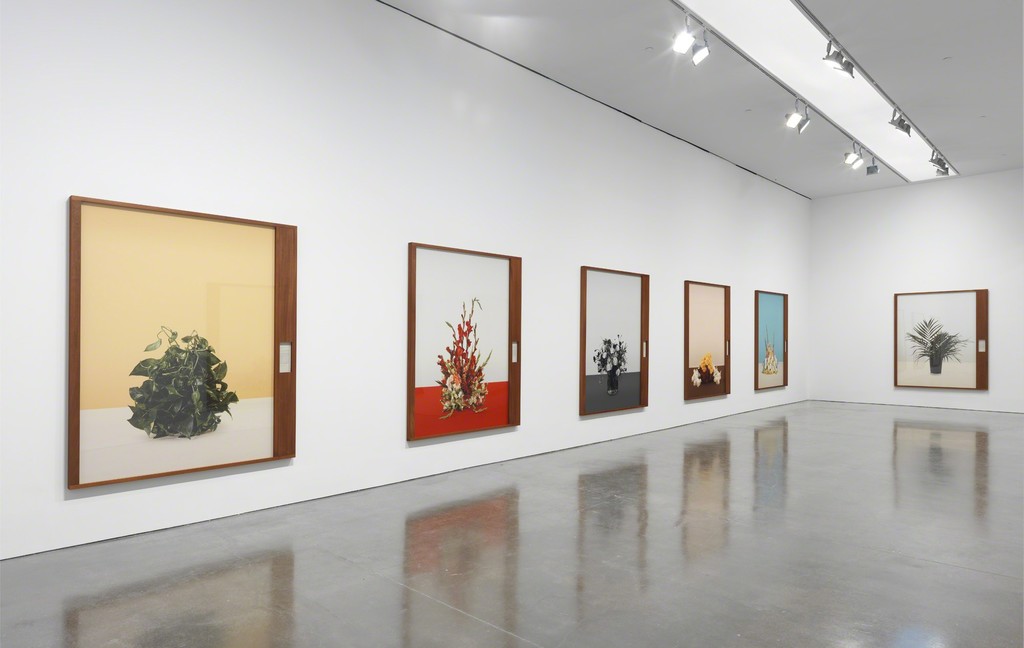 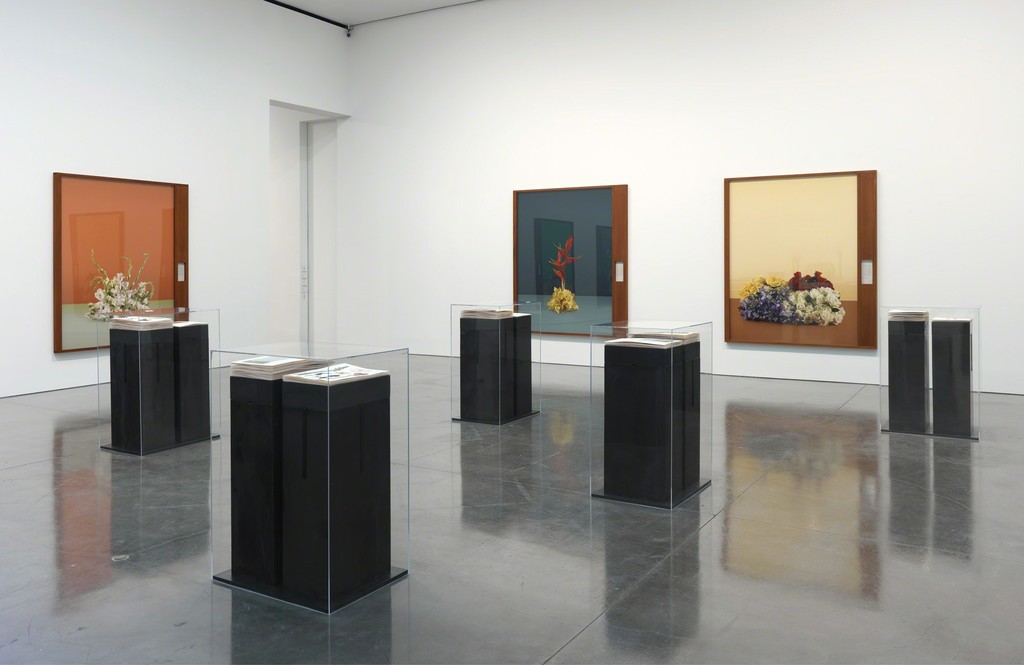 Gagosian is pleased to present Taryn Simon’s first exhibition at the New York gallery, of sculptures and photographs. The sculptures—Simon’s first foray into the medium—previewed at the 56th Biennale di Venezia in 2015; this exhibition brings them together with large-scale, annotated photographs as a complete body of work for the first time.

The 12 sculptures and 36 photographs that comprise the new series are at once referential and autonomous. The photographs—large, colorful, and spectacular with a nod to Pop art, and custom-framed in mahogany to emulate the style of boardroom furniture–speak to the bombast of national and corporate symbolism; the sculptures—stylized concrete flower-presses containing delicate preserved floral specimens and their documentation—operate in a discrete and classified zone.

A storyteller whose grist is the instability of fact, Simon’s research-driven approach has produced such impactful bodies of work as The Innocents (2002); An American Index of the Hidden and Unfamiliar (2007); Contraband (2010); and A Living Man Declared Dead and Other Chapters I-XVIII (2008–11); as well as the more whimsical The Picture Collection (2013), and Birds of the West Indies (2013–14). Simon takes empirical photography into the field of post-conceptual practice, with exacting attention to aesthetic and formal concerns.

In Paperwork and the Will of Capital, Simon examines accords, treaties, and decrees drafted to influence systems of governance and economics, from nuclear armament to oil deals and diamond trading. All involve the countries present at the 1944 United Nations Monetary and Financial Conference in Bretton Woods, New Hampshire, which addressed the globalization of economics after World War II, leading to the establishment of the International Monetary Fund (IMF) and the World Bank. In images of the signings of these documents, powerful men flank floral arrangements designed to underscore the importance of the parties present. Each of Simon’s recreations of these floral arrangements represents an “impossible bouquet”—a concept that emerged in Dutch still-life painting parallel to the country’s seventeenth-century economic boom, which ushered in the development of modern capitalism. The impossible bouquet, a collection of flowers that could never bloom naturally in the same season and geographic location, is an artificial fantasy made real in Simon’s photographs, thanks to the globalization of the modern flower industry.

For the recreated arrangements, Simon imported more than 4000 flower and plant specimens from the world’s largest flower auction in Aalsmeer, Netherlands, where 20 million flowers arrive and depart daily, bound for international retail destinations. Working with a botanist and from archival records, she identified all the flowers and remade the floral arrangements from each signing, then photographed them against striking bicolored fields relating to the foregrounds and backgrounds in the historical images, pairing each arrangement with a description of the pertinent accord. For the sculptures, selected specimens from the 36 arrangements were dried, pressed, and sewn to archival herbarium paper; a complete set of the 36 botanical collages was then placed in each of the 12 concrete presses, along with inkjet prints of their photographic likenesses and narrative texts--sealed together in a race against time.

Paperwork and the Will of Capital inquires into the instability of executive decision-making and the precarious nature of survival, as well as the reliability and endurance of records: the accords and their far-reaching effects, Simon’s photographs, and the preserved botanical specimens in their concrete presses; language itself. The vivid photographic still lifes stand in contrast to the sculptural natures mortes: as time advances, so may these artifacts transform, revealing mutable versions of themselves.

A fully illustrated catalogue published by Hatje Cantz and Gagosian will include essays by Kate Fowle and Nicholas Kulish, botanical texts by Daniel Atha, and a short story by Hanan al-Shaykh.

Simon's Birds of the West Indies I and II (2013–14) will be on view at the George Eastman Museum in Rochester, New York from February 13–May 15 of this year. Paperwork and the Will of Capital will be exhibited at Garage Museum of Contemporary Art, Moscow in March of this year and other institutional venues during 2016–17. Major solo exhibitions are planned at Galerie Rudolfinum, Prague and The Louisiana Museum, Denmark in 2016. Simon is also currently working on her first performative work, jointly commissioned by Park Avenue Armory, New York and Artangel, London to premier in September 2016.

For further information please contact the gallery at [email protected] or at +1.212.741.1111. All images are subject to copyright. Gallery approval must be granted prior to reproduction.