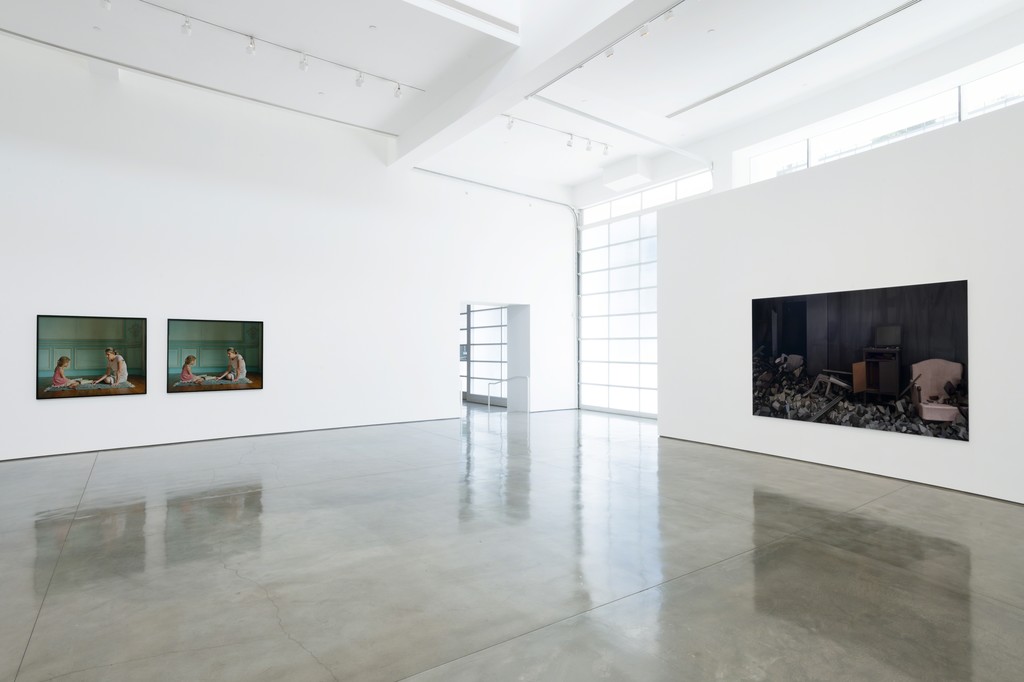 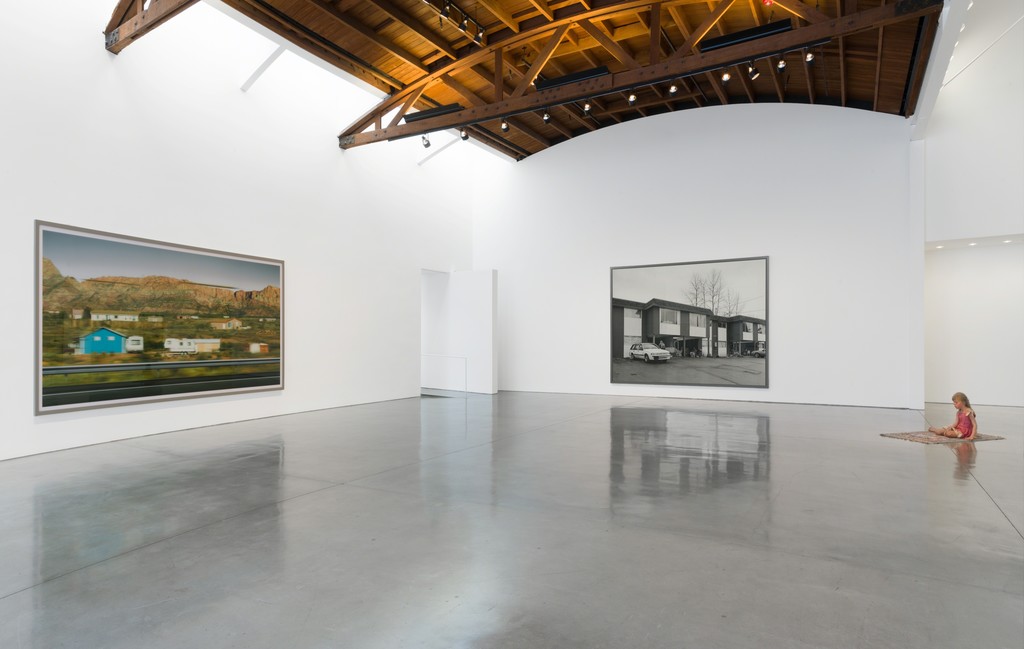 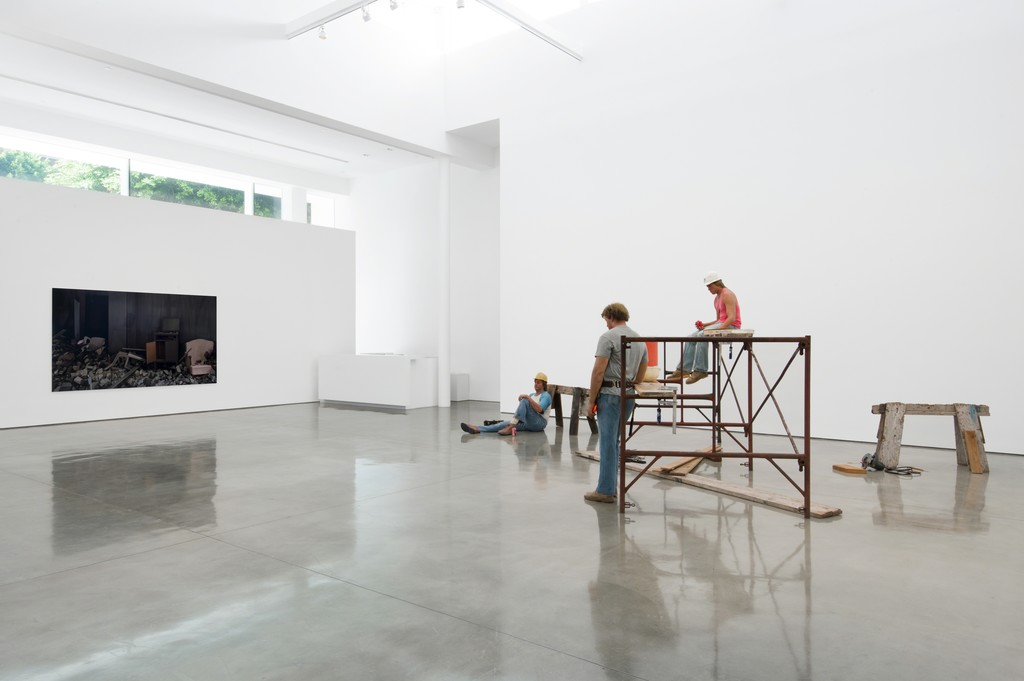 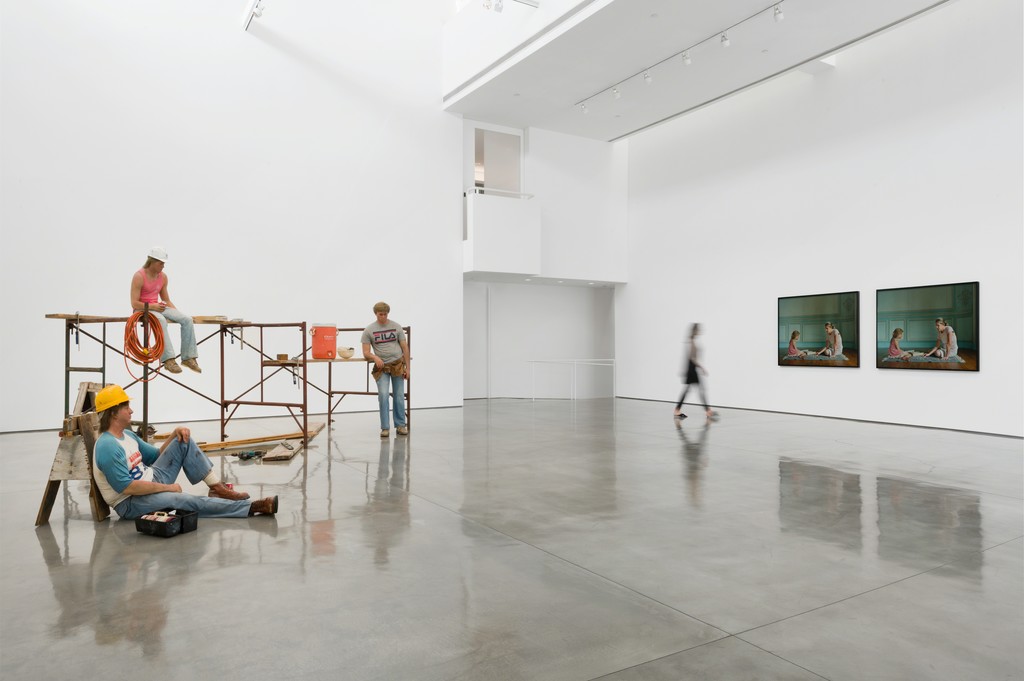 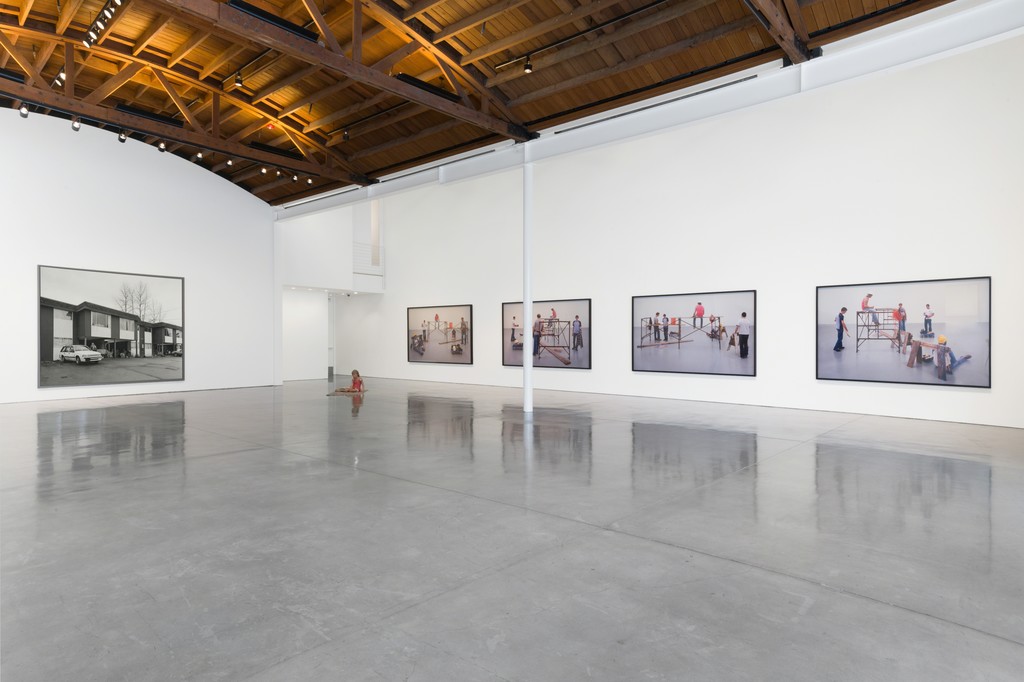 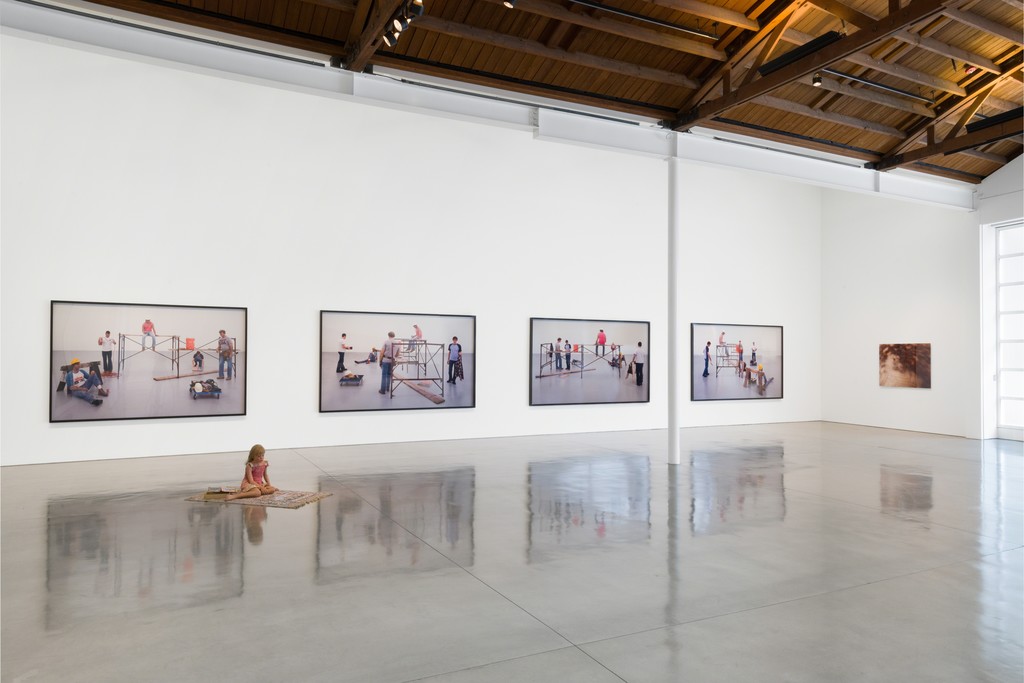 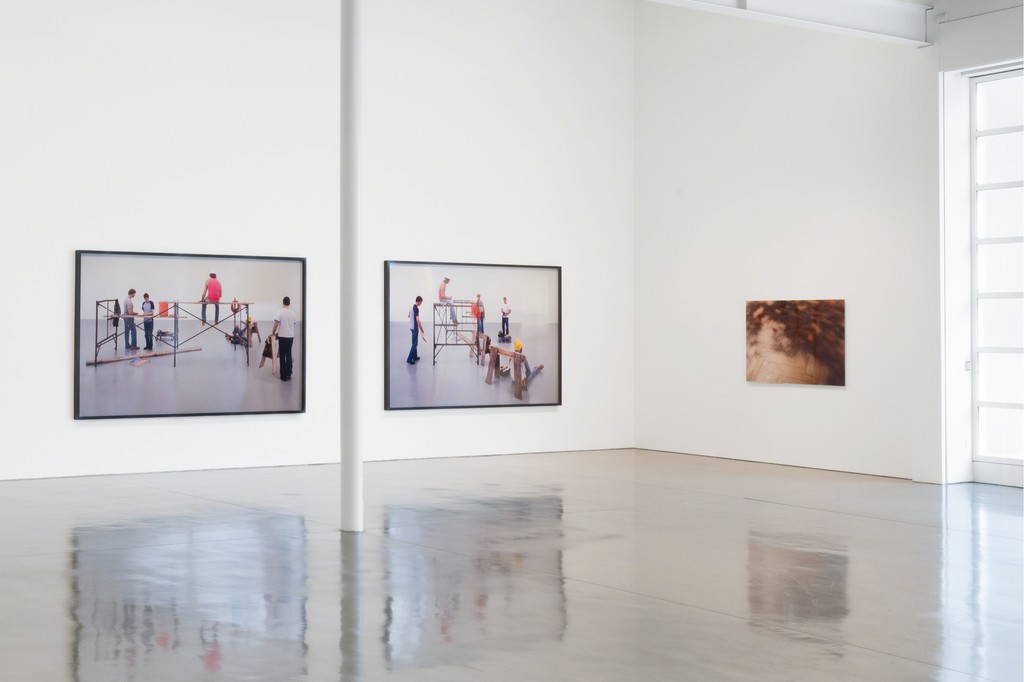 Realism is best suited to convey the frightening idiosyncrasies of our time.
—Duane Hanson

A picture is something that makes invisible its before and after.
—Jeff Wall

Gagosian is pleased to present I Don’t Like Fiction, I Like History, with works by Thomas Demand, Andreas Gursky, Duane Hanson, Sharon Lockhart, and Jeff Wall.

Using the pictorial languages of realism and illusion, the participating artists turn fragments of everyday life into legible narratives. Duane Hanson’s ensemble of construction workers at rest, Lunchbreak (1989), and a figure modeled after his own child in a quiet moment, Child with Puzzle (1978), are installed with photographic works that both reflect and complicate ideas of recorded reality and subjective, constructed composition.

Hanson’s hyperreal human figures, often in mundane situations, have been compared to Pop and to Photorealism; instantly and innately familiar, they come as close to photography as three-dimensional sculpture can. Yet in their verisimilitude, these effigies of house painters, janitors, security workers, and tourists evoke the intuitive pathos of confronting another human being. Working against the dominant trends of abstraction and Minimalism at the beginning of his career in the 1950s and ’60s, Hanson eschewed pure formalism, as the sociological aspect of art making became palpable in his work through his concentration on the bare life of his subjects. Some sculptures, such as that of a museum guard installed within a museum exhibition, deconstruct the “fourth wall” between artworks and viewer, making visceral a normally safe, insulated encounter.

In 2002, Sharon Lockhart created a photographic restaging of Hanson’s Child with Puzzle, and in 2003, she photographed Lunchbreak installed at the Scottish National Gallery of Modern Art. Lockhart, however, posed real people in place of Hanson’s lifelike figures, conflating the sculpture-as-image with the photograph as a form of sculpture, and generating a dialogue between two- and three-dimensional perspectives. In both of the two rooms of this exhibition, Lockhart’s images of flesh-and-blood humans squarely face off against the physical heft of Hanson’s sculptural figures.

In the first gallery, Thomas Demand’s large-scale photograph Ruine / Ruin (2017) is encompassed within the viewer’s sight lines of Hanson’s Lunchbreak. Close to ten feet wide, Ruine / Ruin is based on a news media photograph of a domestic interior in the aftermath of an aerial bombing. Originally trained as a sculptor, Demand meticulously reconstructed this scene of domiciliary life thrown into chaos, in minute detail, using paper and cardboard, and destroyed his model after photographing it.

In the second gallery, Hanson’s Child with Puzzle sculpture and Lockhart’s photographs of Lunchbreak each correspond to their parallel representations in the previous room. Jeff Wall’s Tenants (2007), a black-and-white image of an otherwise unremarkable moment on a nondescript housing estate, suggests a filmic suspension of time within the subdued desolation of daily life. Andreas Gursky’s Utah (2017) shows a stretch of highway and a blur of houses—a liminal space, part of the connective tissue of American society. Based on a photograph that Gursky took on his phone from the window of a moving car, Utah is cinematic in its proportions, and the spontaneity of the image is dramatized by abstracted lines of movement over the Utah mountains. Demand’s deft manipulation of light, shadow, and sculptural reproduction to challenge our tacit acceptance of the information given by a photographic image is reinforced in Parkett / Parquetry (2014), which shows nothing but a sun-dappled wood floor: Henri Matisse’s studio floor at the Hotel Regina, Nice, where Matisse worked on his celebrated late body of work, the cut-outs. In its restrained calm, the interplay of the wood floor’s geometry, accentuated by the irregular organic shadow of an unseen tree, creates an illusive system of patterning, transforming spontaneity into order.

Each of these works, while documentary at first glance, is meticulously conceptualized and composed, creating a cross-media dialogue between photography and sculpture. In making visible moments that often go unseen, the works effect a shift of scale and perspective within the walls of the gallery, suggesting their own visions of quintessentially American realities within imagined interior landscapes.