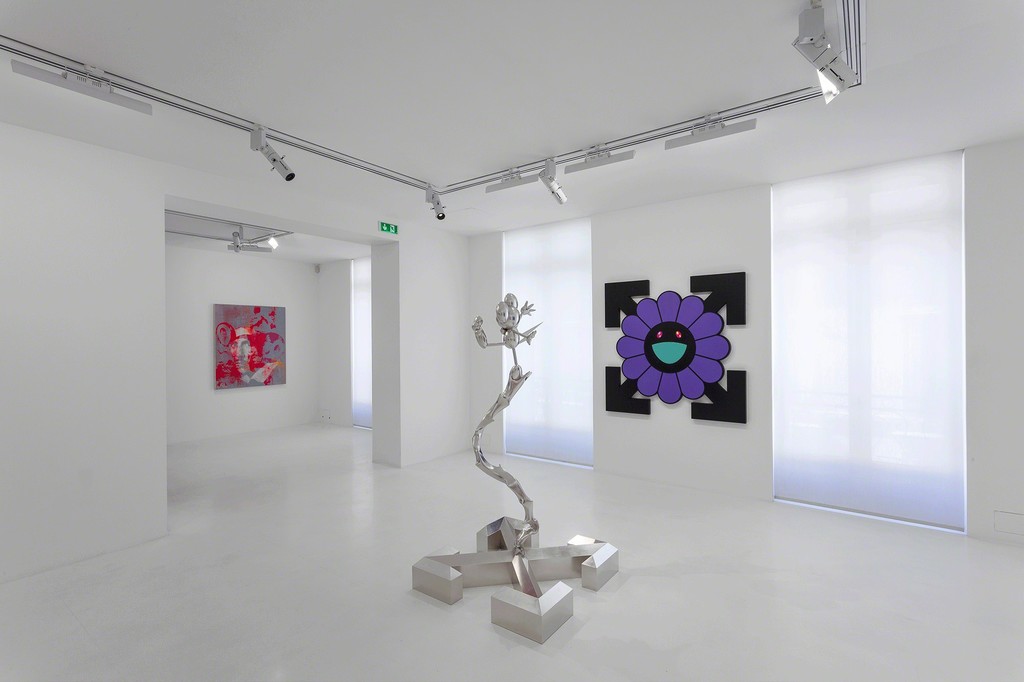 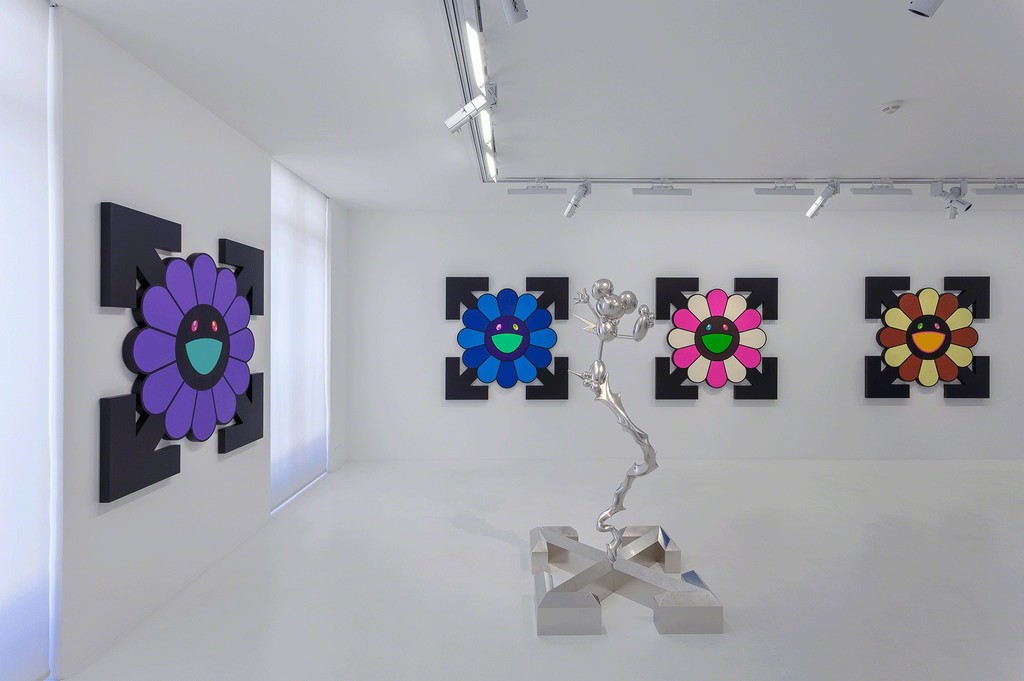 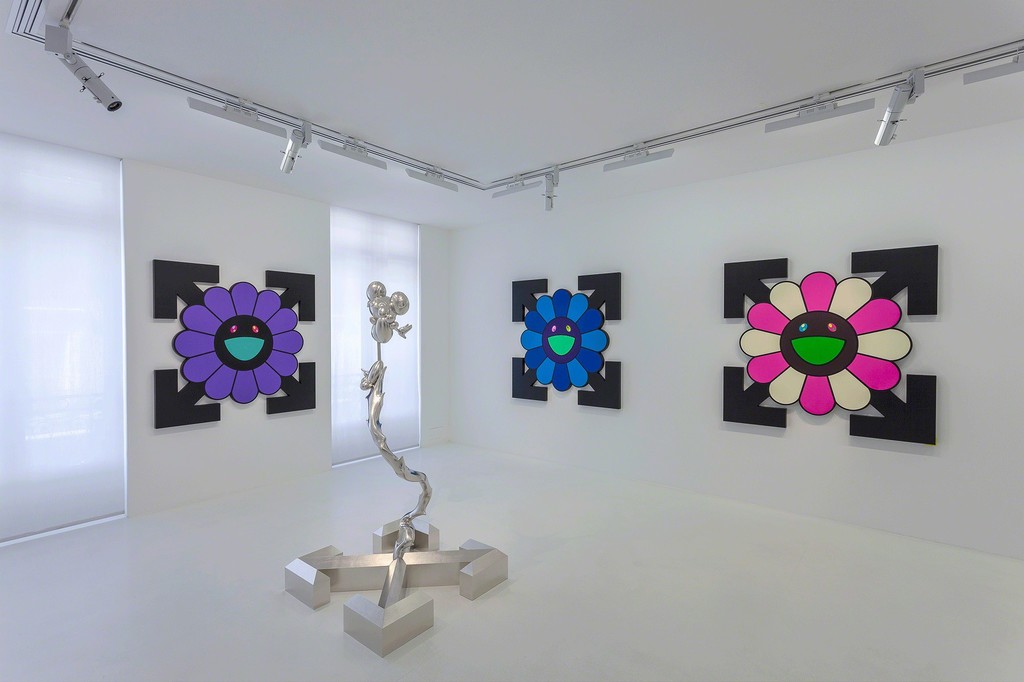 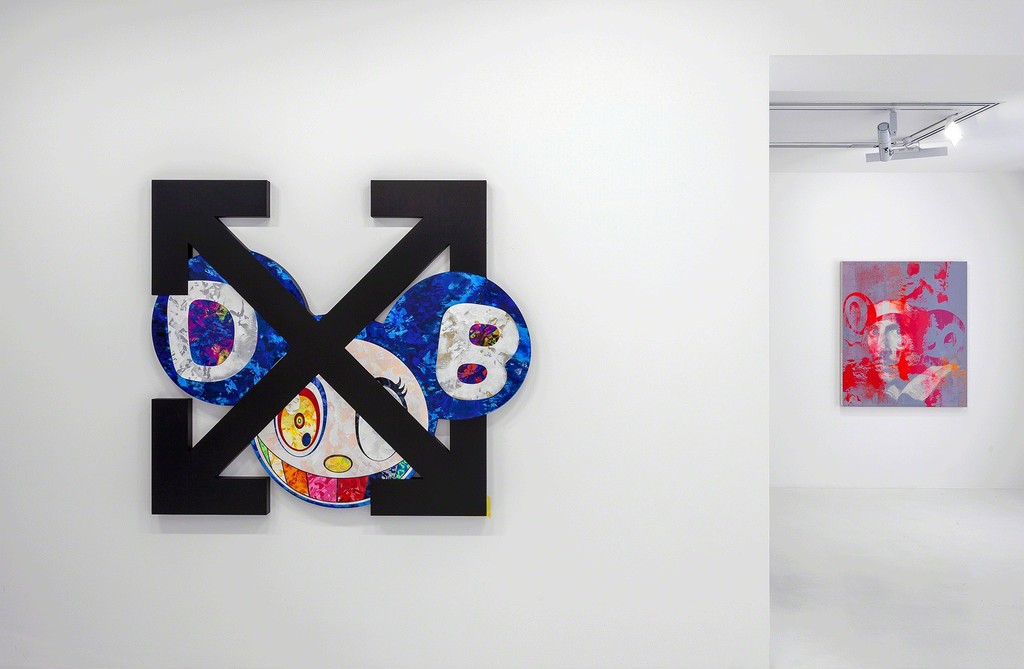 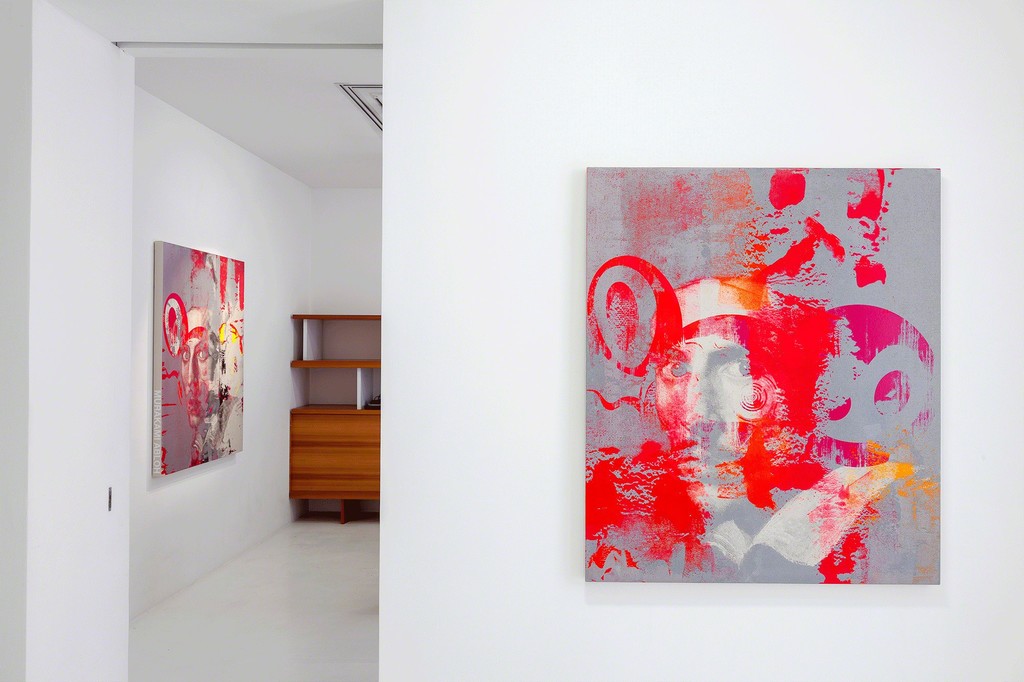 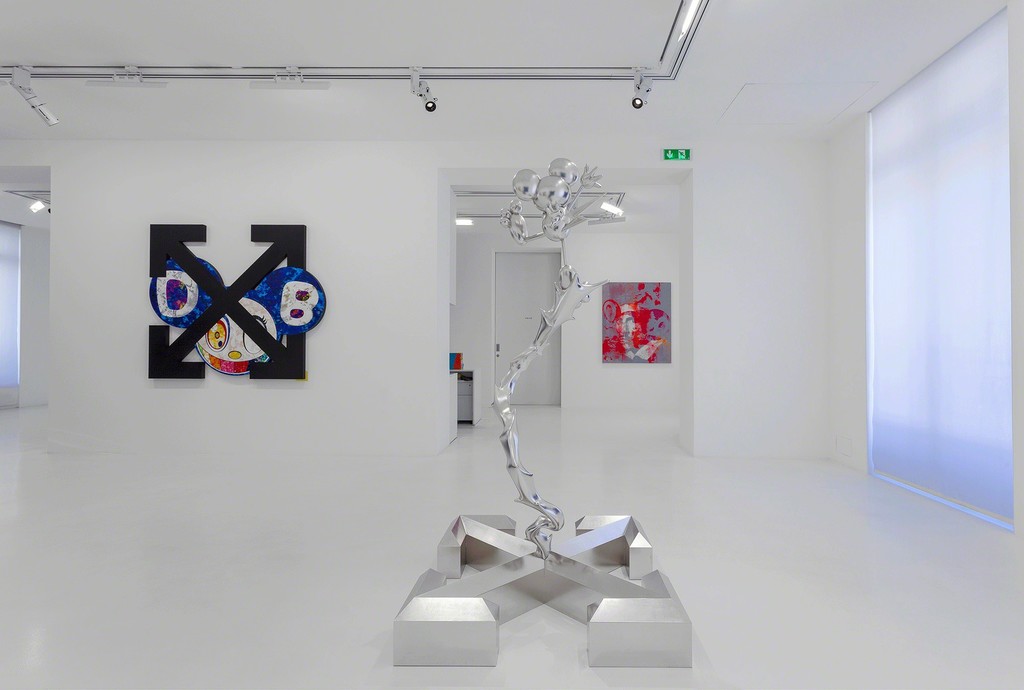 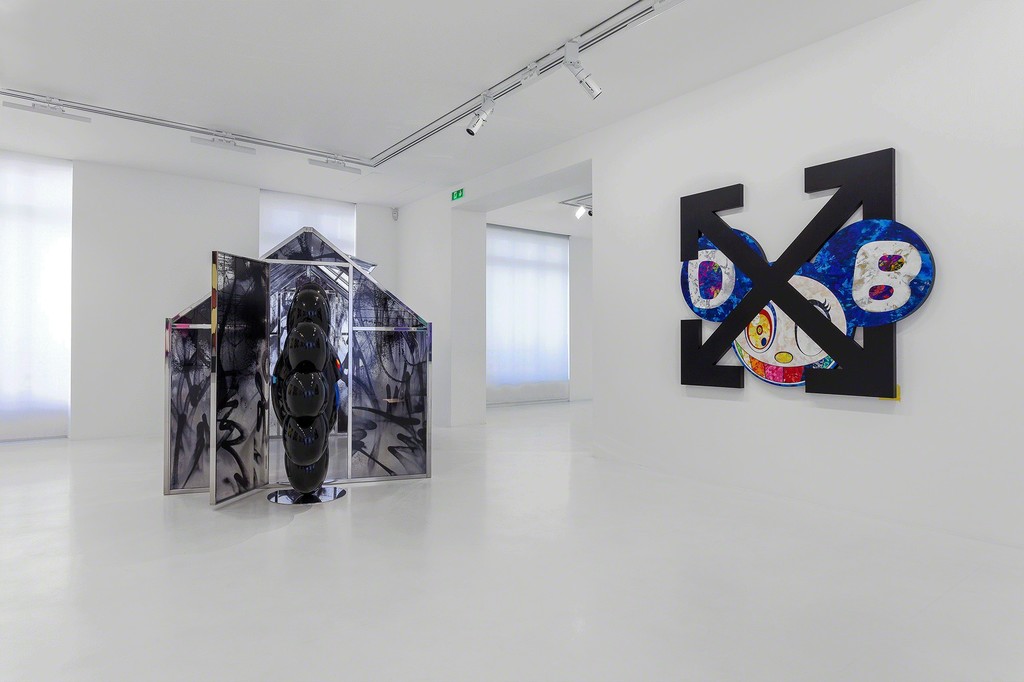 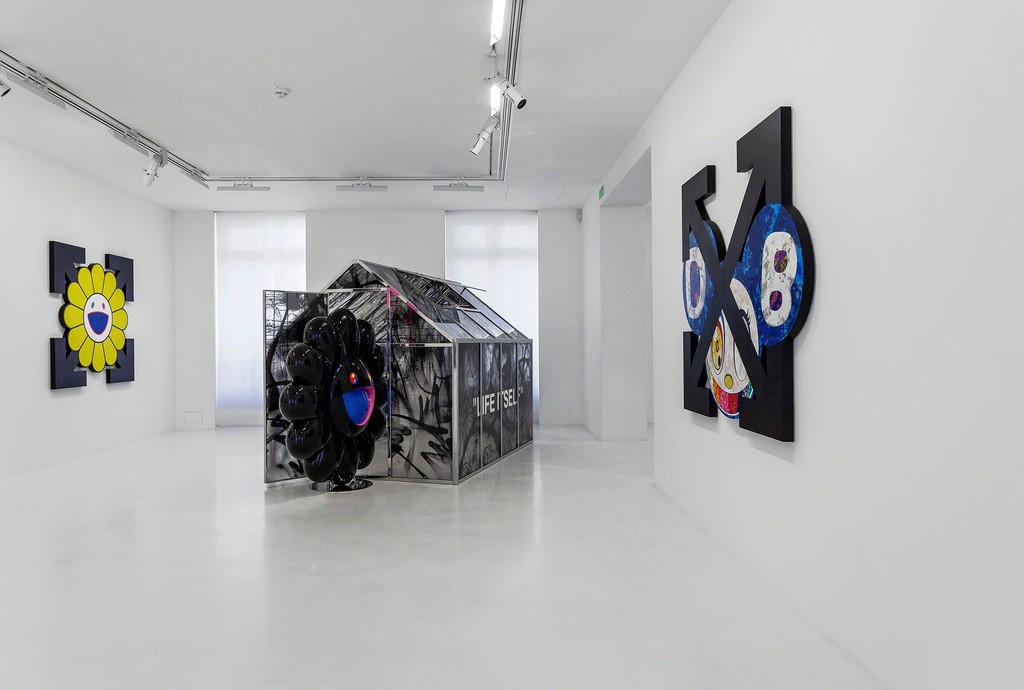 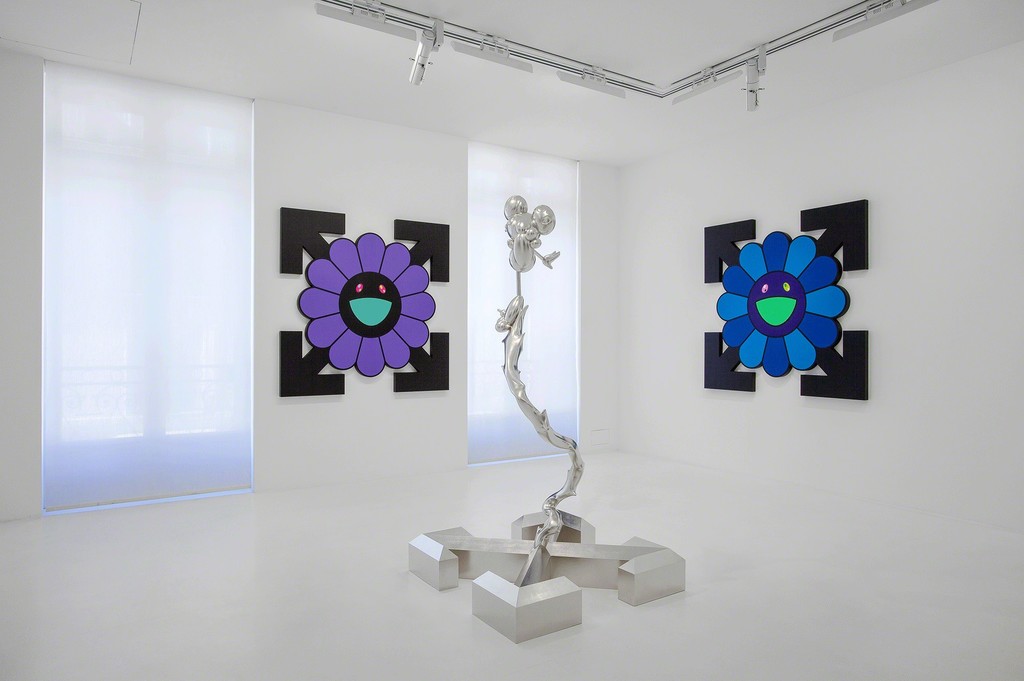 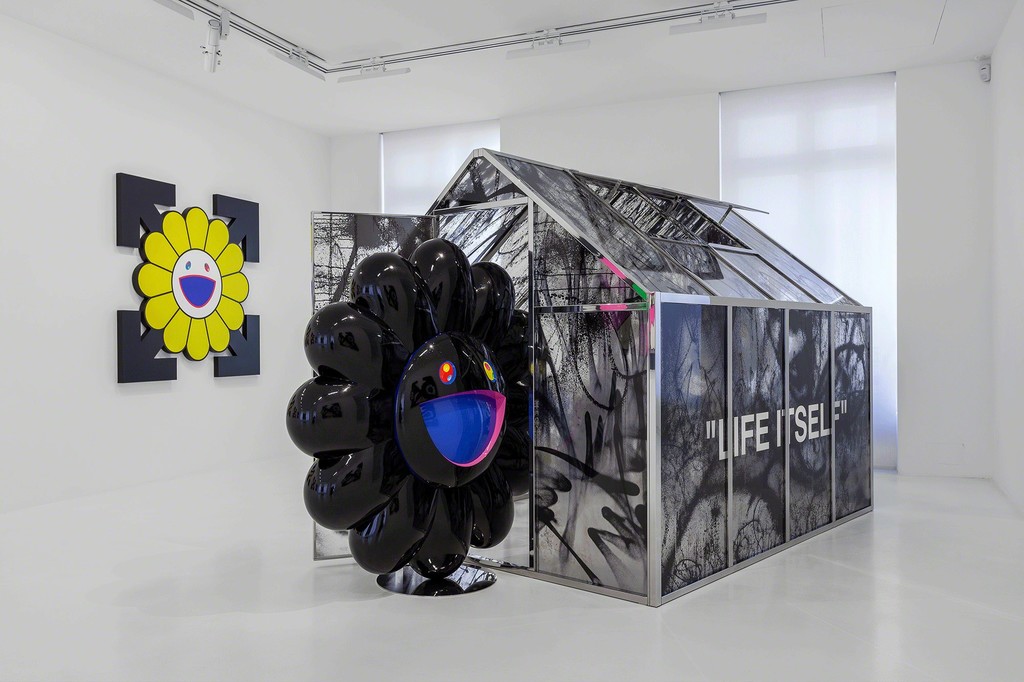 We are driven by an innate ambition to make artworks that are shaped by societal observations—in a variety of media—which by their existence produce a new cultural impact.
—Virgil Abloh

During their recent collaboration, Murakami and Abloh have produced works in which their respective styles and trademarks intersect in a stream of freewheeling, punkish mash-ups. In this exhibition, new iterations of the “TIMES NATURE” (2018) paintings include multimedia works such as “animated” and illuminated paintings, which play on cultural references, ideas of production and reproduction, and concepts of linear time. Two sculptures will be included in the exhibition: in “LIFE ITSELF” (2018), an oversize three-dimensional iteration of Murakami’s smiling flower motif sits in the open doorway of a greenhouse-like structure, expressively spray-painted in black; and in “OUR OUTER SPACE” (2018), Mr. DOB, one of Murakami’s many invented characters, emerges from Abloh’s signature four-point arrow logo. The two artists, kindred spirits from different sectors of a broader cultural zone, reflect incisively on the signs of the times in which we live, while working to disrupt the stratifications of cultural production.

Abloh, trained as an architect and engineer, works across fashion, architecture, performance, and consumer products, often deconstructing the creative process in public to challenge and analyze existing aesthetic systems and their distribution. The street-couture label Off-White, which he founded in 2013, combines conventional tailoring with more subversive references.

The artists will be in attendance at the opening reception.

The Octopus Eats Its Own Leg is currently on view at the Modern Art Museum of Fort Worth, TX, until September 16.

Virgil Abloh was born in 1980 in Rockford, Illinois. After earning a degree in civil engineering from the University of Wisconsin–Madison, he completed a master’s degree in architecture at the Illinois Institute of Technology. In 2013 he founded a Milan-based clothing line entitled Off-White, for which he was awarded the British Fashion Council’s Urban Luxe award in 2017. In 2019, the Museum of Contemporary Art, Chicago, will hold a retrospective of his work, curated by Michael Darling.

In March, Louis Vuitton named Abloh its new artistic director of menswear. He will show his first collection for Louis Vuitton during Paris Men’s Fashion Week on June 21, 2018.