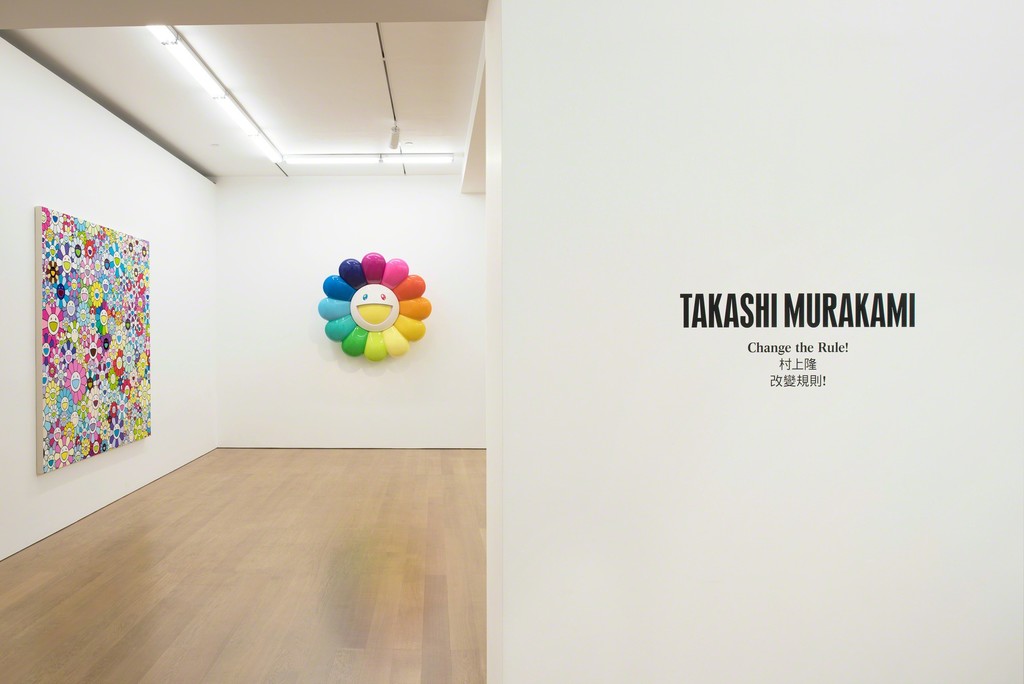 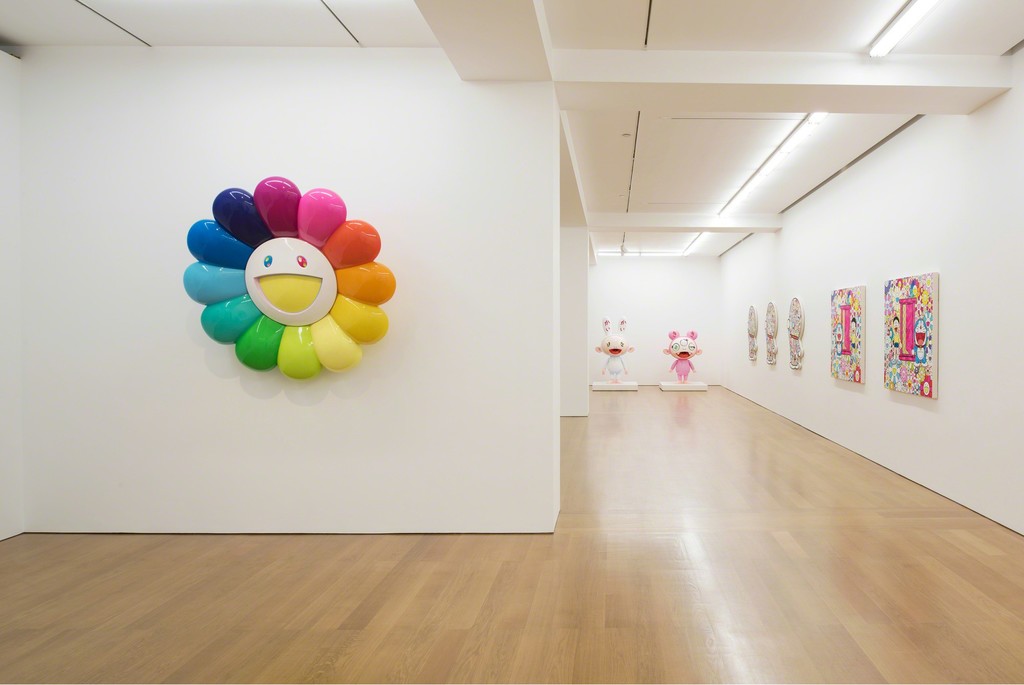 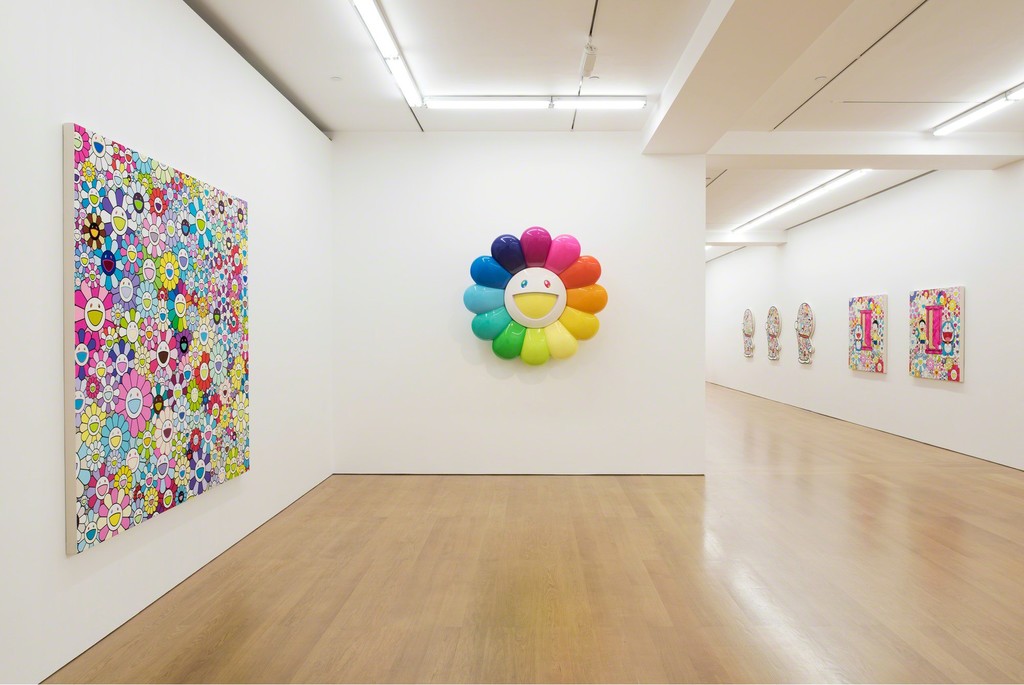 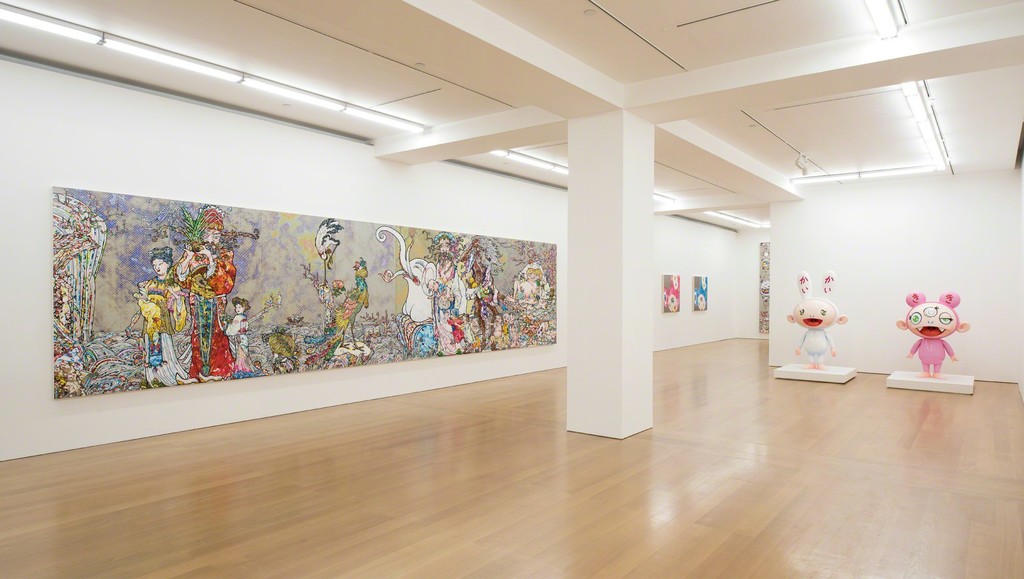 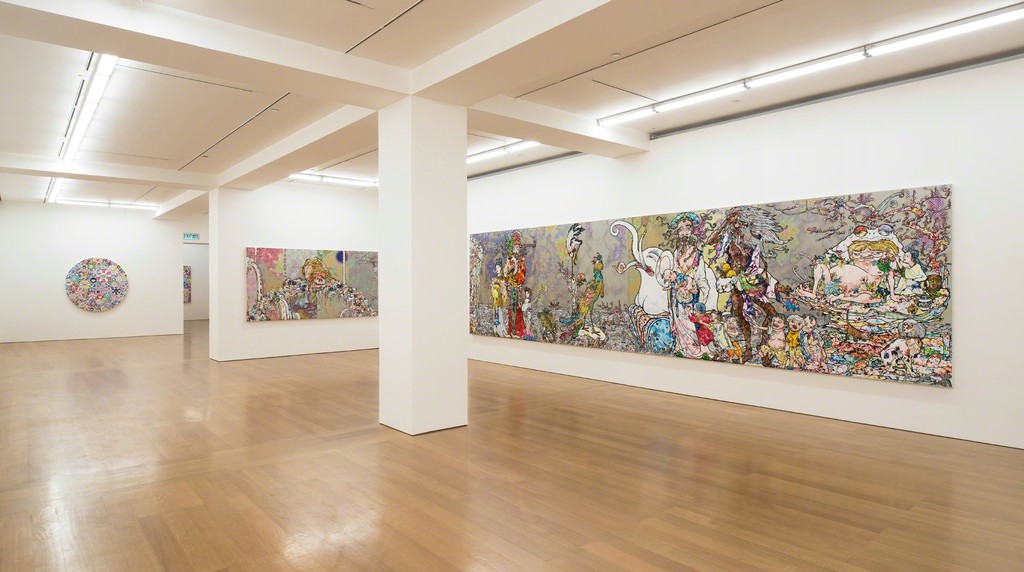 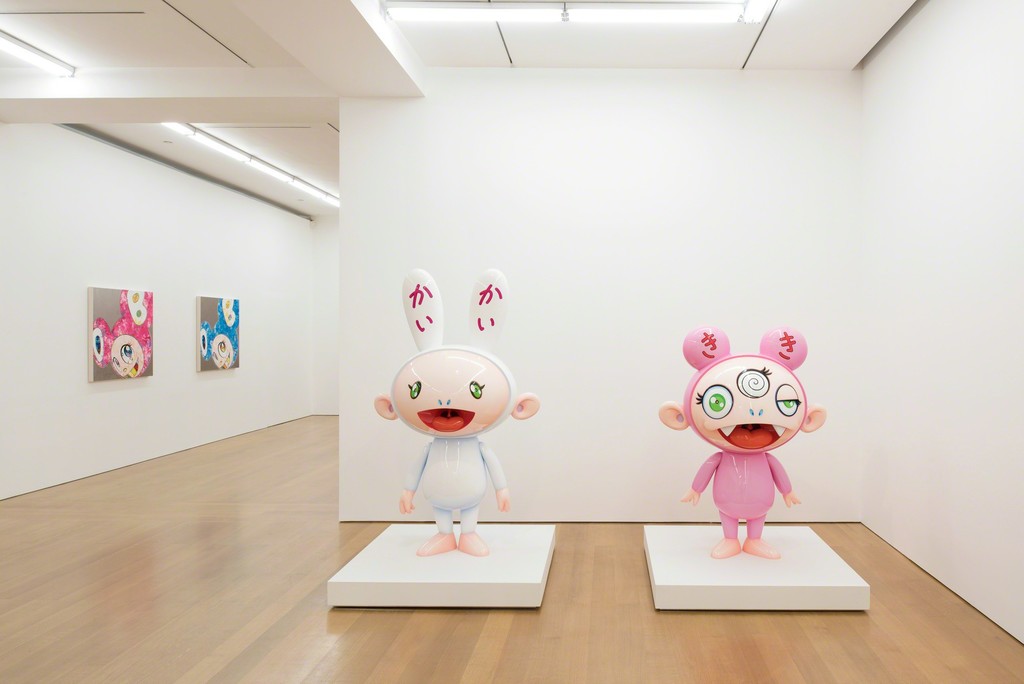 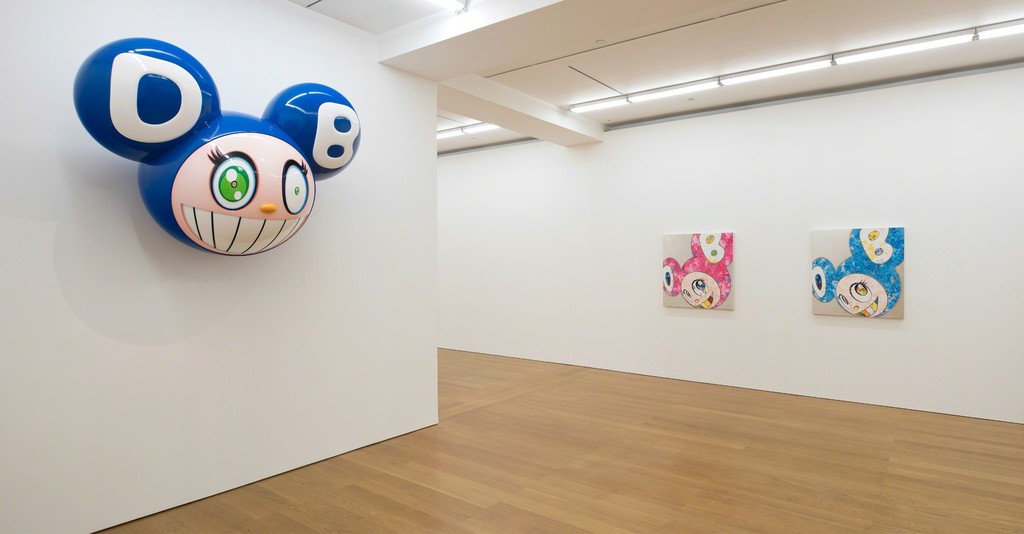 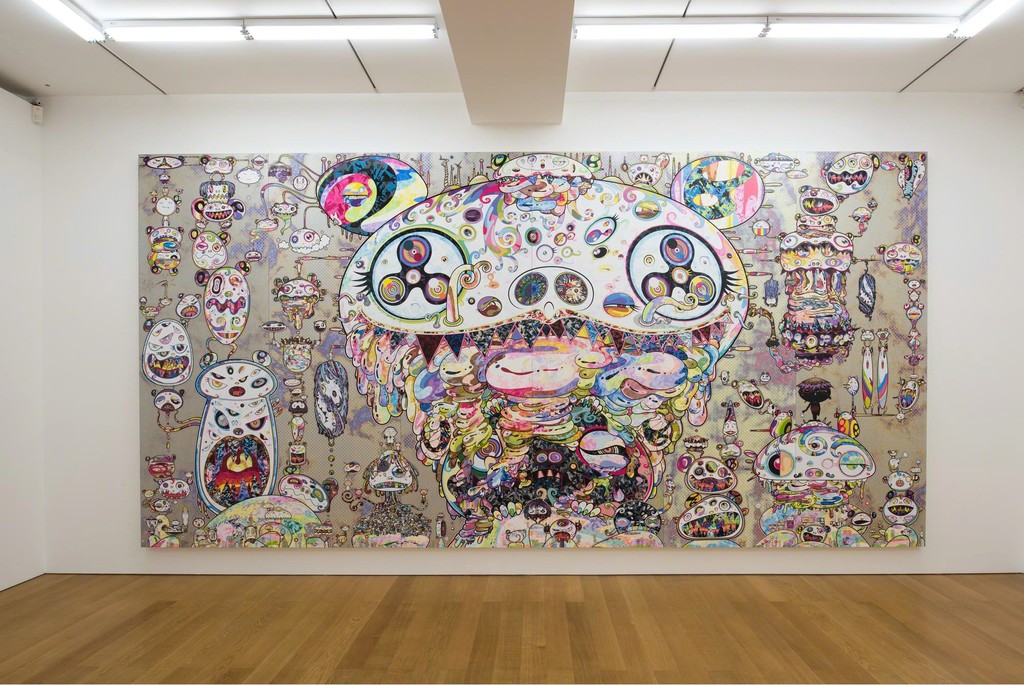 When I manage to snatch the tail of an idea, I must then transport a fragment of it to a completely different region of my brain . . . Once a deadline is met, that region can relax, so I graft the new idea onto that relaxed region in order to nurture and grow it. This is the process I endlessly repeat, and as such, I can never see the end of it; each day of unease is followed by another, and only for a moment when a project is complete do I get to experience a modicum of liberation. As a distant result of such a thankless, humorless repetition, interesting works get made.
—Takashi Murakami

Gagosian is pleased to present Change the Rule!, new paintings and sculptures by Takashi Murakami.

Murakami seamlessly blends commercial imagery, anime, manga, and traditional Japanese styles and subjects, revealing the themes and questions that connect past and present, East and West, technology and fantasy. His paintings, sculptures, and films are populated by repeated motifs and evolving characters of his own creation. Together with dystopian themes and contemporary references, he revitalizes narratives of transcendence in continuation of the nonconformist legacy of a group of eighteenth-century Japanese artists known as the Edo eccentrics.

Change the Rule! reveals myriad variations of Murakami’s own imagery, each combination generating new meaning. His first character, Mr. DOB, appears in pink and blue, floating over a platinum background; stares forward with wide eyes in a painted fiber-reinforced plastic sculpture; and melts and mutates in Tan Tan Bo a.k.a. Gerotan: Having vomited five viscera and six bowels along with a lump of ego, he swallows them back into his empty stomach as everything disperses into the void; along the process he starts his journey into meditation. (2018), a mural-sized painting in which DOB, with fidget-spinners for eyes, explodes with countless permutations of himself. Large cast and painted sculptures of Kaikai (a white, rabbitlike character) and Kiki (a three-eyed pink figure) further underscore Murakami’s interest in paradox, as the adjective kikikaikai describes something that is dangerous yet appealing.

In 2002 and 2017 in Japan, Murakami participated in The Doraemon Exhibitions, group shows of contemporary artworks inspired by the famous manga character, a time-traveling catlike robot who befriends a young boy named Nobita Nobi. For the current exhibition, he has produced new paintings depicting Nobita and Doraemon waving in front of the Anywhere Door, a device that allows its user to teleport. Surrounded by multicolored smiling flowers, the portal opens onto a plane of shimmering gold. Three shaped canvases show Doraemon from the back, his outline filled with clusters of more smiling flowers.

Granting entry through the Anywhere Door, Doraemon and Nobita are whimsical parallels to a pair of mythical animals that often guard the entrances of Buddhist temples. One of the animals (known as komainu) is usually a lion, derived from the Chinese lion motif (karajishi), the roots of which can be traced to the Egyptian sphinx. In The Lion of the Kingdom that Transcends Death (2018), Murakami depicts a karajishi resting atop an arching bridge of polychromatic skulls. The painting One encounters a multitude of hardships and disasters along the way to the netherworld, yet this process allows one to take the proper form of a human being and thus attain Buddhahood. (2018) contains further references to Nihonga subjects: a white elephant borrowed from the work of Edo period artist Itō Jakuchū emerges from an immense panorama of immortal hermits, maidens, birds, babies, and more, set in a vibrant, swirling ocean.