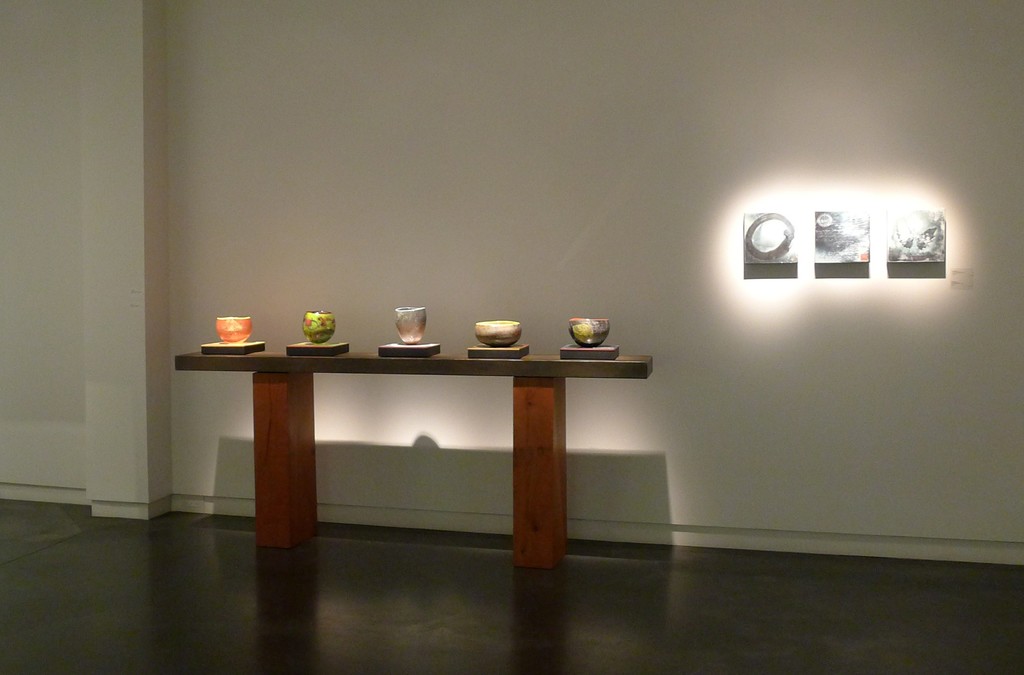 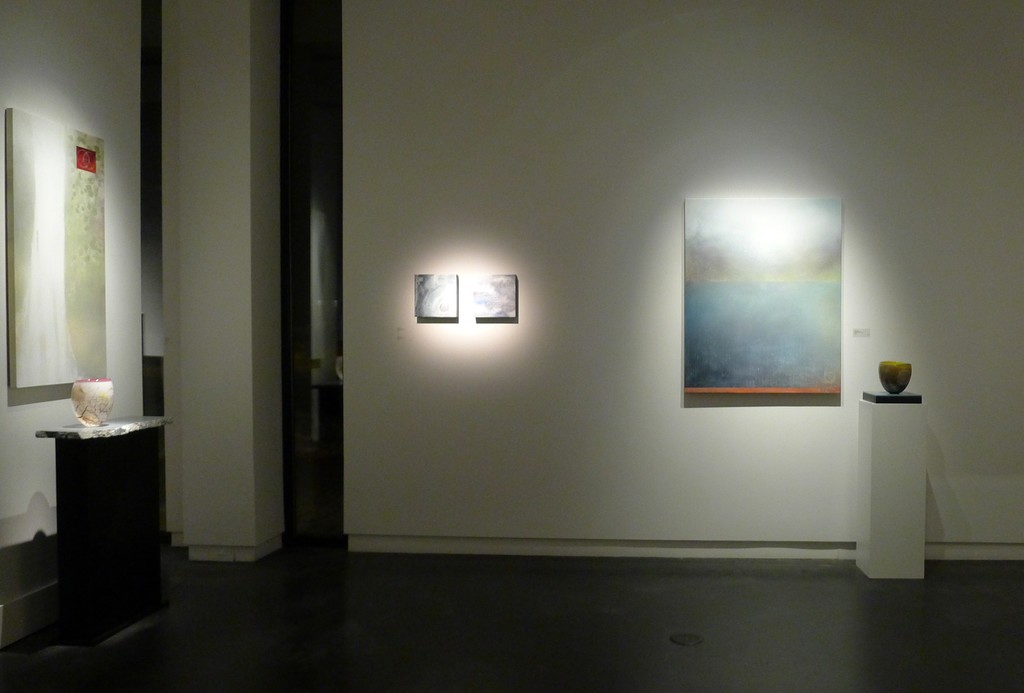 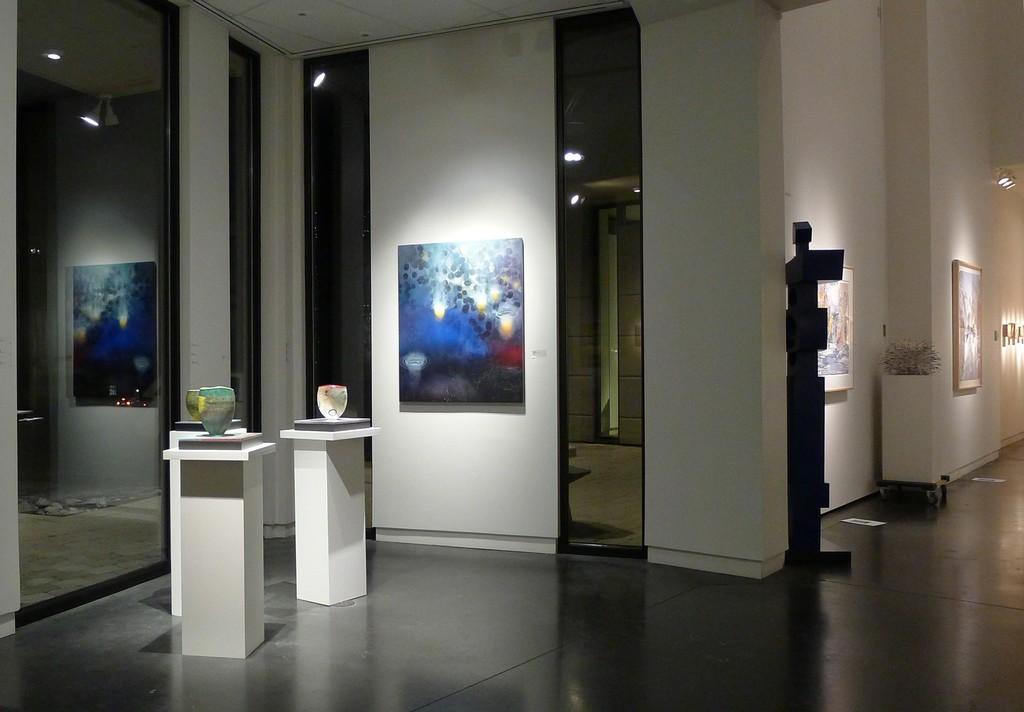 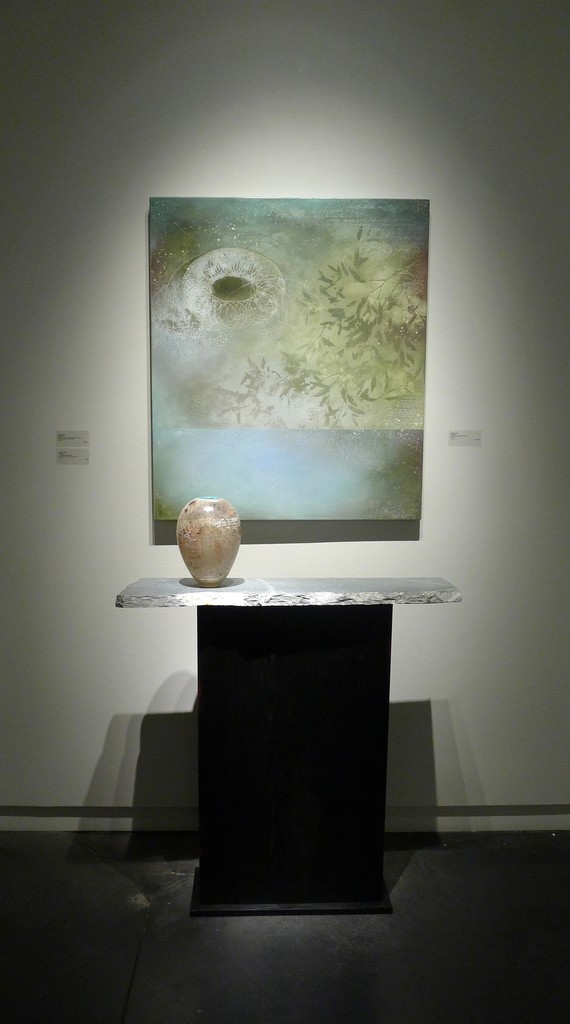 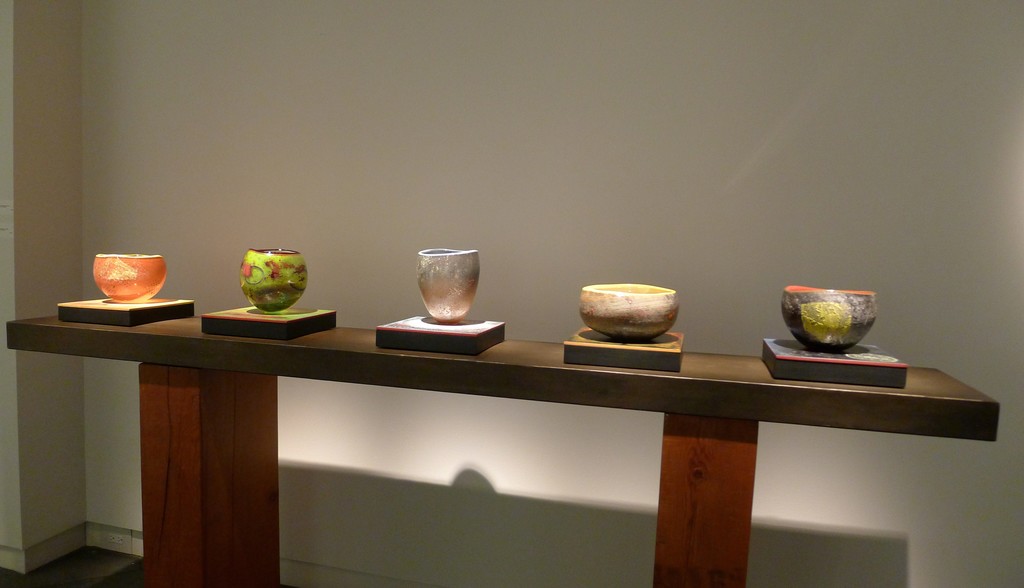 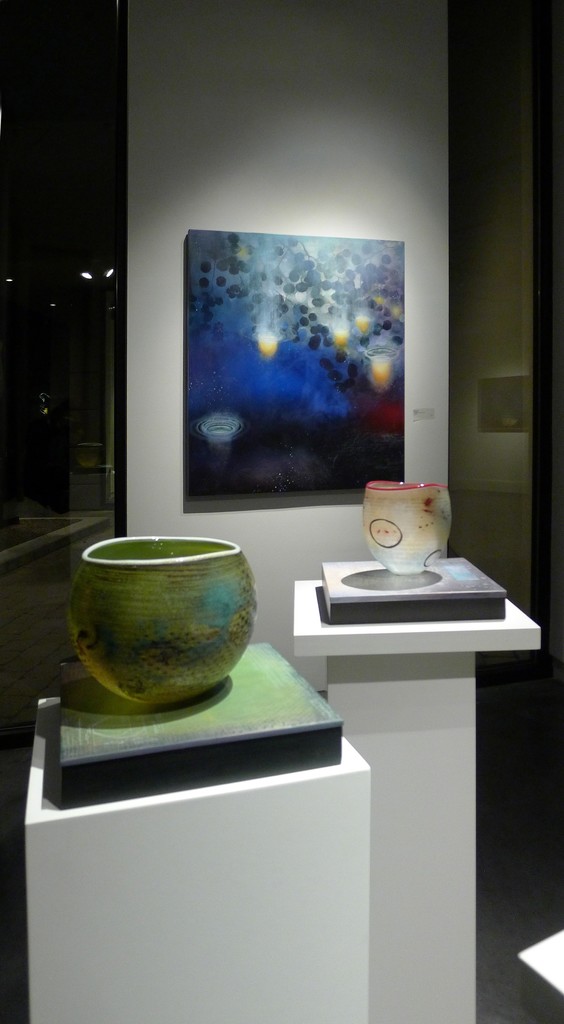 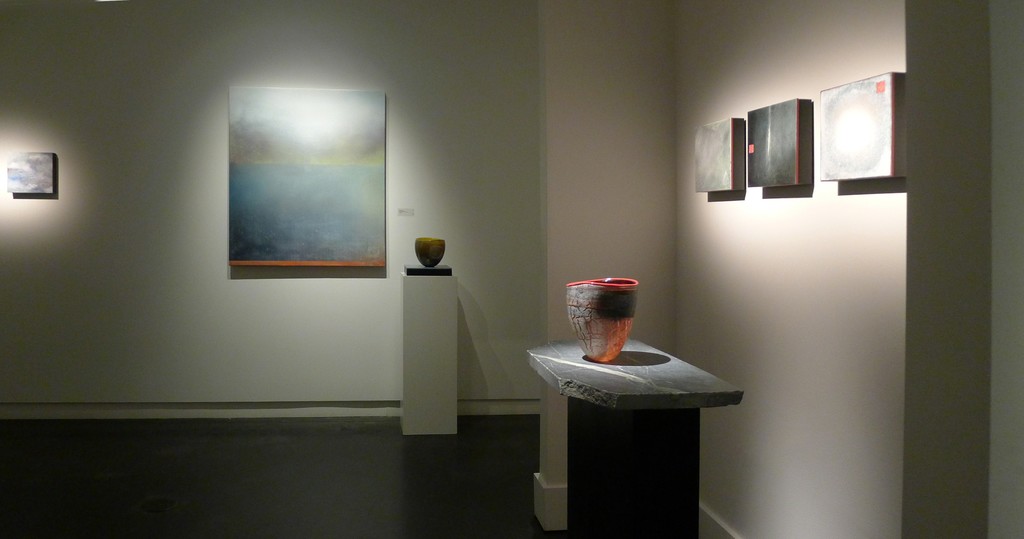 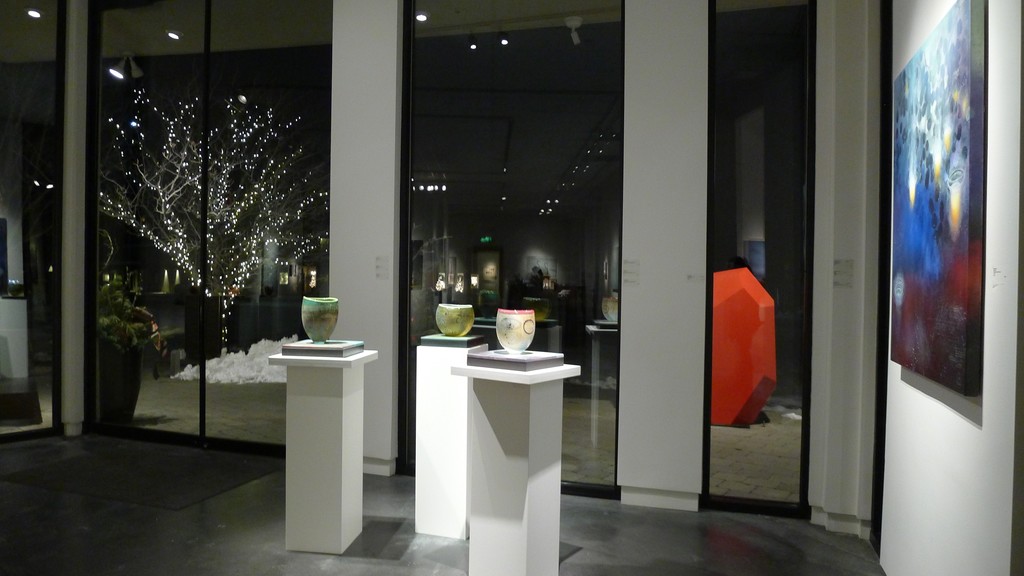 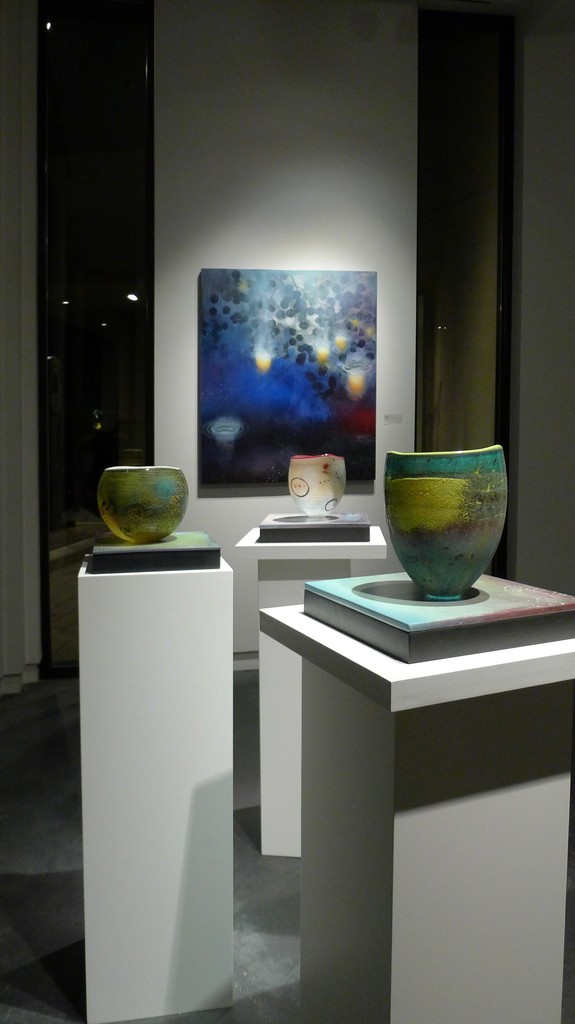 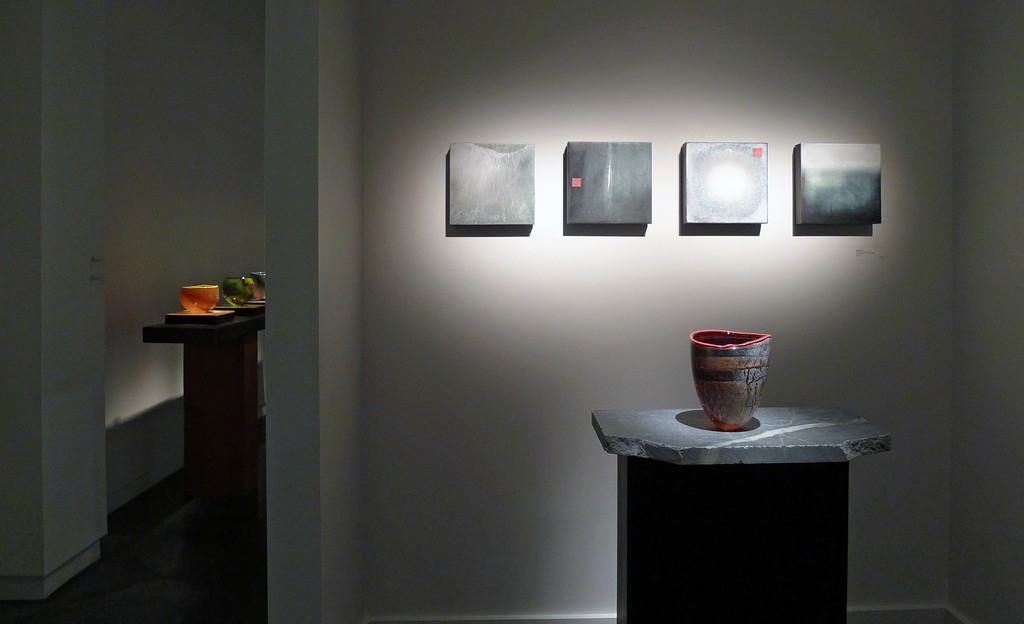 The title for this show comes from T.S. Eliot’s Four Quartets. I often read his poems, taking a section and considering it from different perspectives, watching it appear in the development of a painting, or embedding the script within layers of paint. In one section of Burnt Norton, the phrase “by a grace of sense” hovers jewel-like, asking us to reverse the expected sequence of words.

It is by a grace of sense one realizes that no thing presents itself as utterly passive or inert, that the world is grace-full, and charged with limitless content. This sensing moves us beyond “practical desire”, beyond the constraints of time and the vacuity of experience into where the ineffable sublime might be revealed. Even the most obscure and ordinary aspects of our lived experience can reveal mysterious spirit and content. Let’s call this wonder or awe. In this state – anything, everything – reveals the link between the real and the superreal, reconciling the physical world with the numinous. I find myself often playing on the edge of this frontier, examining what is knowable and familiar, and speculating about the infinite and enigmatic.

This thinking is relevant to many of my paintings. The imagery in “Deeper Well” depicts the elliptical rim of a bowl echoing into the dark mysterious space. Or perhaps the reverse can be seen too, the bowl emerging from this deeper place. The painting titled “Erhebung” takes T.S. Eliot’s German expression of exaltation and Kantian ideas of the supersensible and visually offers a serene blue zone below a very active geometric torus figure, the only recognizable imagery being leafy branches which ground the imagery in a familiar physical setting.

Some of my new paintings are entirely abstract, some gestural and geometric, or with a more minimal color field. An Asian influence is evident in these. Growing up, I was awed by the tales of China my aunt and uncle told. They lived in that country for thirty years and later he became ambassador to Taiwan. They collected many art objects, some that I now own. Looking at these meaningful paintings with their bold gestural depictions, living on the Pacific Rim, and certainly being influenced by my own travels to these places, it’s easy to understand that an Eastern aesthetic seeps into my Western mindset.

Several of these paintings are paired with the experimental glass vessels I made during a residency at the Museum of Glass. There is a symbiosis between bowl as object and as image; marks and surfaces acting as source material for each other. Vessels continue their central casting here. Evoking many associations, the bowl serves as a ritual, domestic, and archetypal object. It remains a compelling symbol in my work, ultimately representing the embodiment of the fluid act of giving and receiving and the generous offerings of the moment.

Relevant to this body of work is the following excerpt from “Burnt Norton” by T.S. Eliot .

“At the still point of the turning world. Neither flesh nor fleshless;
Neither from nor towards; at the still point, there the dance is,
But neither arrest nor movement. And do not call it fixity,
Where past and future are gathered. Neither movement from nor towards,
Neither ascent nor decline. Except for the point, the still point,
There would be no dance, and there is only the dance.
I can only say, there we have been: but I cannot say where.
And I cannot say, how long, for that is to place it in time.
The inner freedom from the practical desire,
The release from action and suffering, release from the inner
And the outer compulsion, yet surrounded
By a grace of sense, a white light still and moving,
Erhebung without motion, concentration
Without elimination, both a new world
And the old made explicit, understood
In the completion of its partial ecstasy,
The resolution of it’s partial horror”