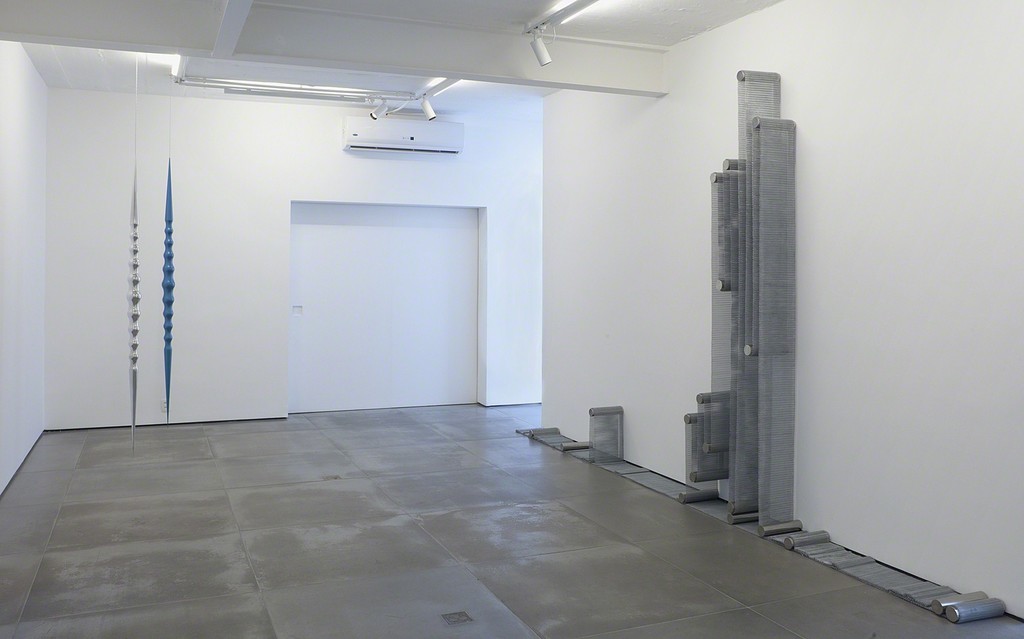 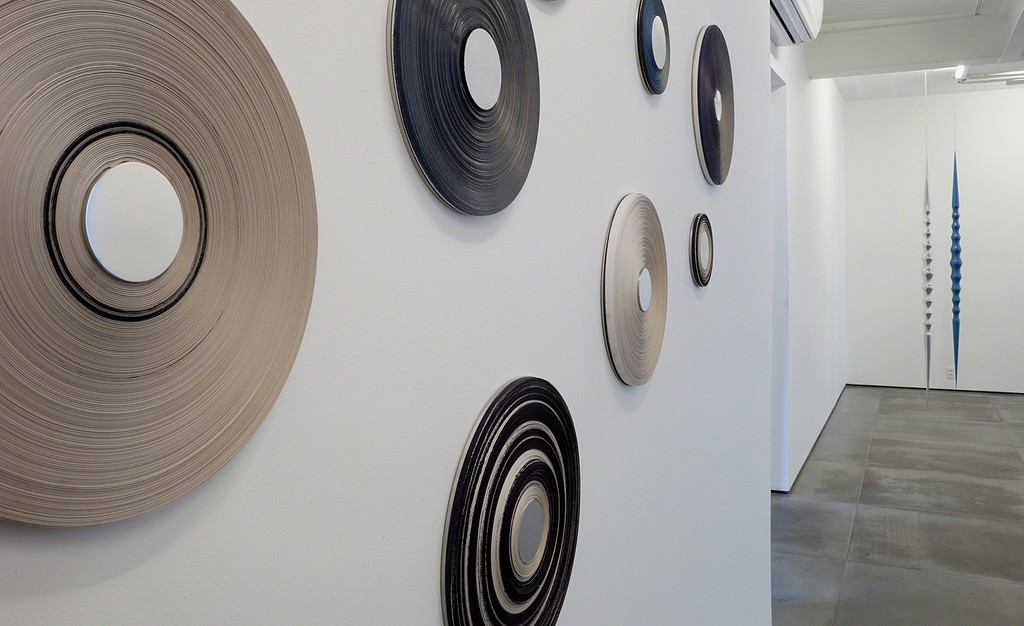 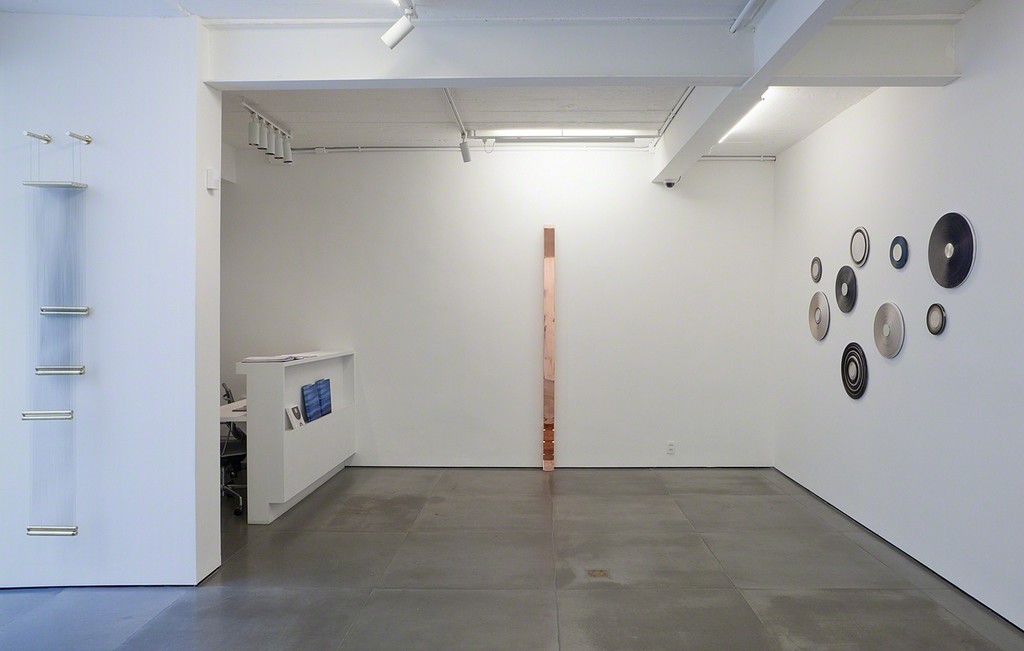 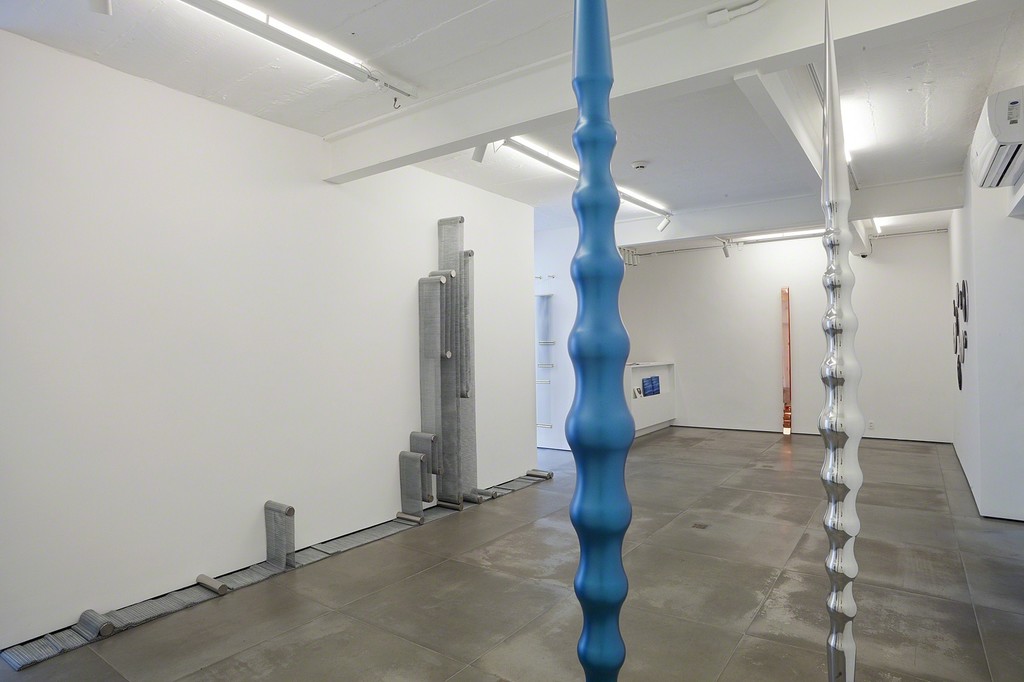 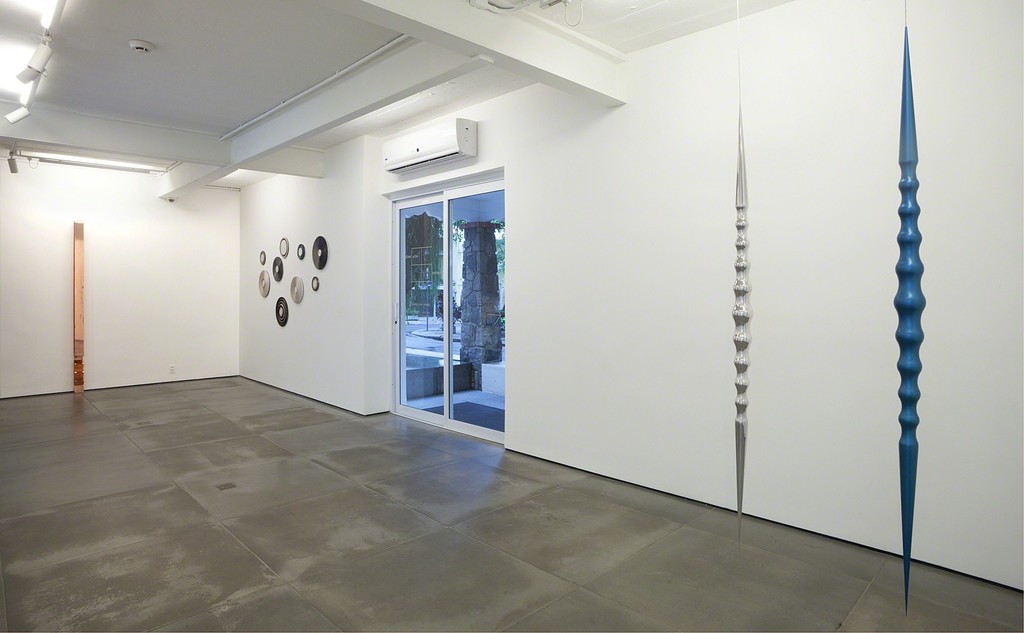 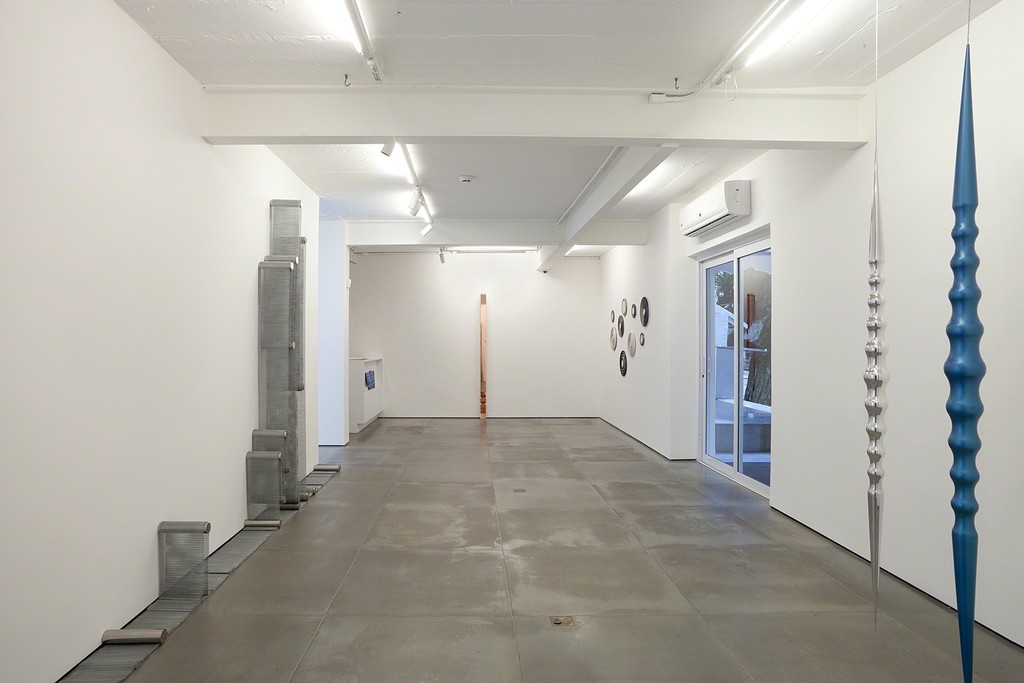 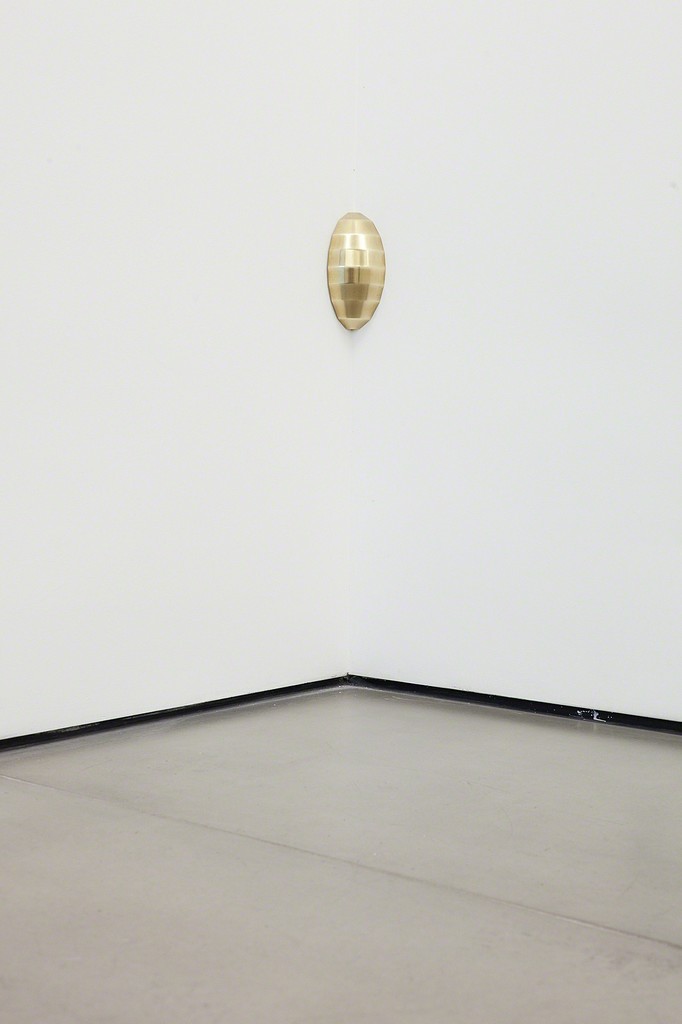 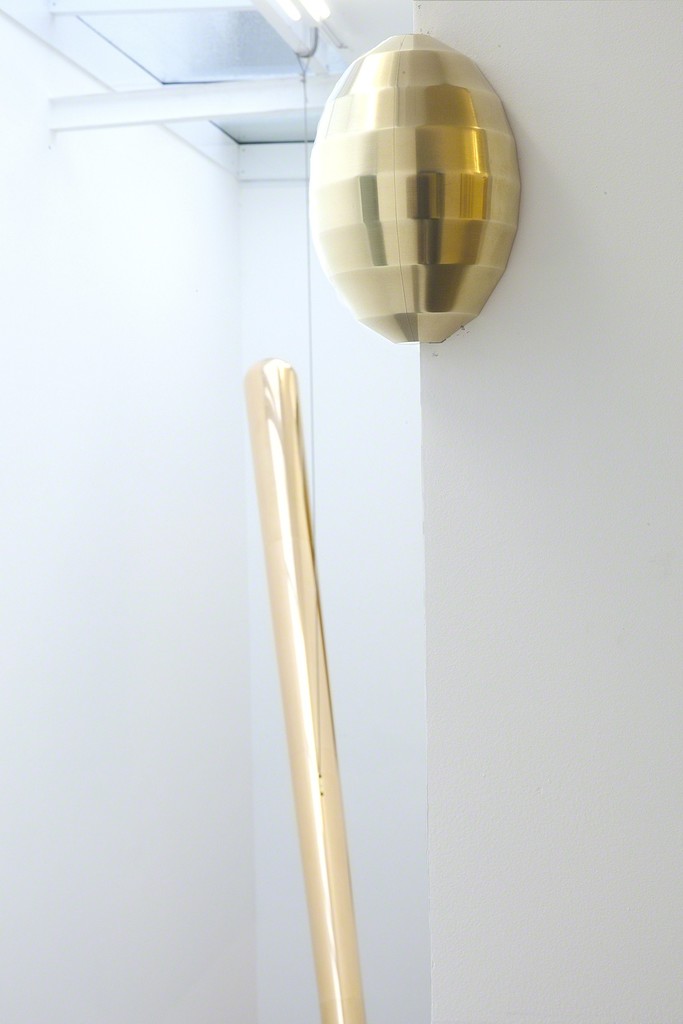 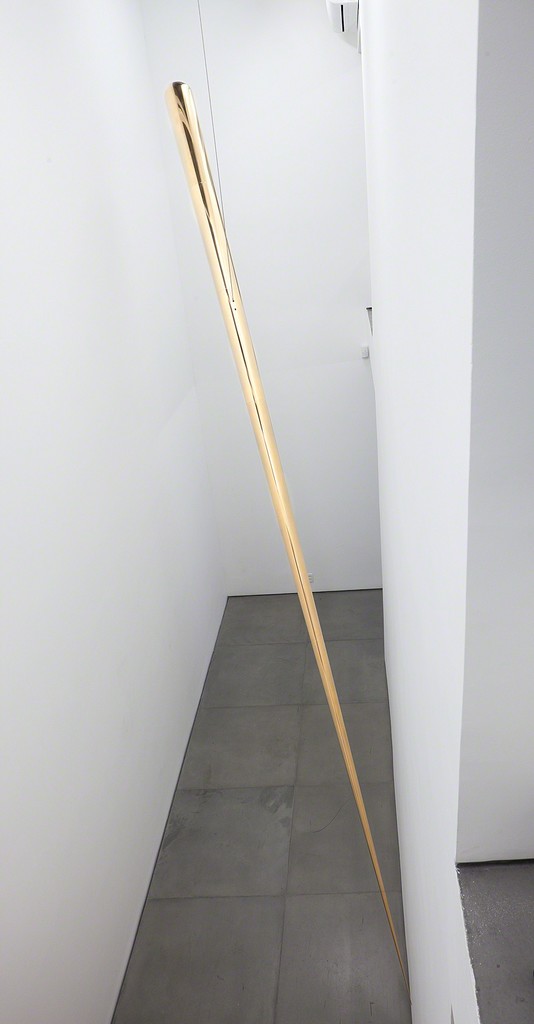 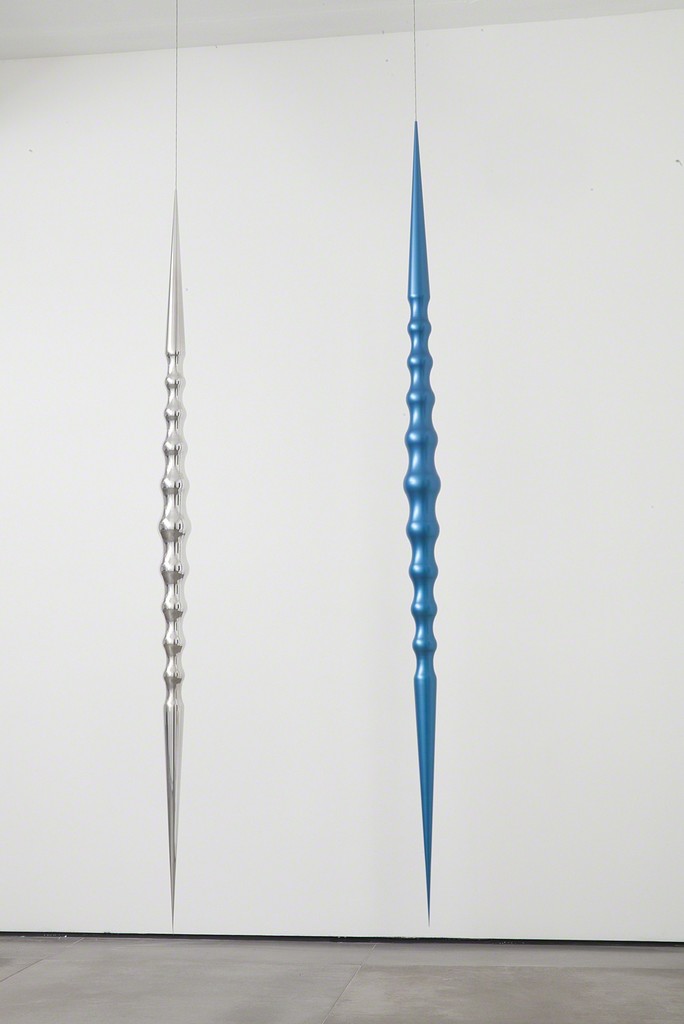 The well-lit facilities of Galeria Nara Roesler in Rio de Janeiro set the stage for Afluentes, the new solo show by São Paulo-based artist Artur Lescher. From 18.06 to 01.08.2015, Rio audiences can witness his recent output, featuring developments of his research from the past two years, as he combines physics and mechanics principles with the semantic synthesis of the sculptures he creates. The outcome is the subversion of the fixedness and weight typical of his raw materials, to the benefit of lightness – and of poetic impressions.

Lescher appropriates raw materials and industrial processes to deliver a precise, organized universe of objects, building tension as the viewer moves through space. The observer unwittingly triggers the possibility of disruption of mathematical perfection and the equilibrium between the artworks through the simple displacement of air – which presupposes the motion of pendulums, even though it doesn’t really take place – and through personal interpretations of what they see. Notions such as balance, equality and proportion are delivered from instrumental use to reunite with their metaphysical character, amplified by the artworks’ formal purity.

The venue will be occupied by nine works, some of which conjure liquid images, like Afluentes, a development of O Rio, a piece featured in the collection of São Paulo’s MAM. Whereas in the latter work, monoprint and offset rollers flow down the wall and onto the floor, in the current version, the paper rolls colored by the artist in shades of blue, black and red remain in place thanks to industrial process, forming a constellation of circles.

The cascade of metal appears to be running down, translating the idea of its natural matrix into a geometric arrangement. The tension of the original image contrasts with the material and the form employed in creating the sculpture, providing evidence of the game the artist proposes, as he manipulates the gap between signifier and signified. In other words, the impossibility of translating nature perfectly while using the cultural code becomes endowed with poetic freedom, conferring a transcendent, near-primitive meaning to the artworks.

The inner dynamics of the piece Rio de Parede, comprising 17 pulleys and a hanging metal mesh, builds upon the works featured in the 2013 exhibit Objeto Pantográfico (Pantographic Object). The undulations and fluidity of a river are given a static representation capable of conveying the motion of the original. In the artist’s own words, this piece presents itself “in relation with the liquid state of things.”

In the 2013 show, Artur Lescher employed the figure of the pantograph, a tool for enlarging or reducing drawings, as a unifying thread. Formed by two vertical and two horizontal vectors, the contraption reproduces the desired image in a larger or smaller scale, as the hand mechanically retraces the original lines.

On that occasion, British critic Isobel Whitelegg wrote about the pantograph’s broader metaphoric meaning: "Other artworks share the principles of this invention’s compression and expansion mechanism instead of its literal form. They evoke the pantograph as a mechanical body capable of advancing and retreating, of changing its reach and adjusting its density, and thus being perceived as being heavier or lighter: expanded to encompass space in its structure, or compressed to exclude it.” This idea is subjected to novel interpretations in this new solo show in Rio de Janeiro.

As pertains to lightness extracted from dense materials, the pendulums Ann, in cobalt blue, and Suave, in anodized aluminum, carry on Lescher’s tradition of creating extremely narrow sculptures that appear to float on their own once suspended. Moreover, they build tension with the possibility of moving with any gust of wind or sound vibration, even though their weight almost always keeps them static.

Utilizing incoming light from the skylight in the small annex room for added visual effect, Pivô relates to the space it is in. “The pieces take advantage of certain spatial situations,” says the artist. Made from golden metal, this piece differs from the other pendulums in the way it hangs by its midpoint. This endows it with an irregular motion, like a disoriented compass needle that isn’t moved by the earth’s magnetism, and therefore ceases to serve its logical purpose.

This inversion is a follow-up to concepts addressed in the exhibition Nostalgia do Engenheiro (Mexico, 2014), whose title (Engineer’s Nostalgia) symbolizes a remission to the formulation of the world through mathematical construction that modern philosophy holds so dear. In the show, science’s condition of possibility is associated with the metaphysical foundation of its principles, bringing together worlds that seem antipodal in contemporary times; In Lescher’s output, this articulation is crucial.

In his work in general and in this particular show, the artist not only suspends the artworks from the ceiling or the walls. By cleverly manipulating viewer perception through contrasting matters and senses, through form and matrix, Lescher appears to suspend the very passing of time.