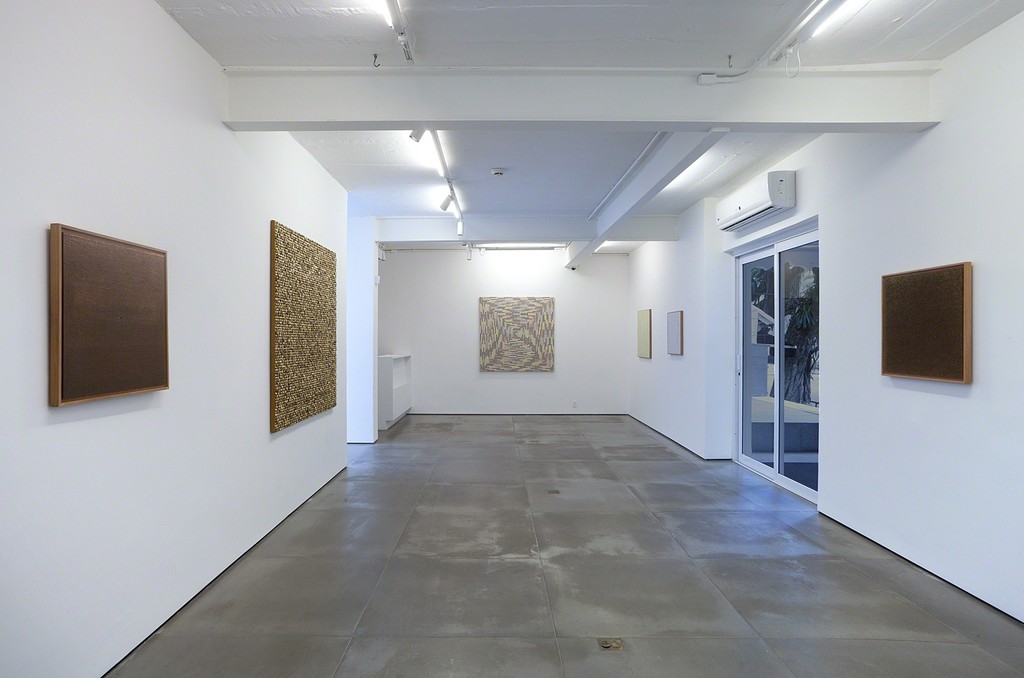 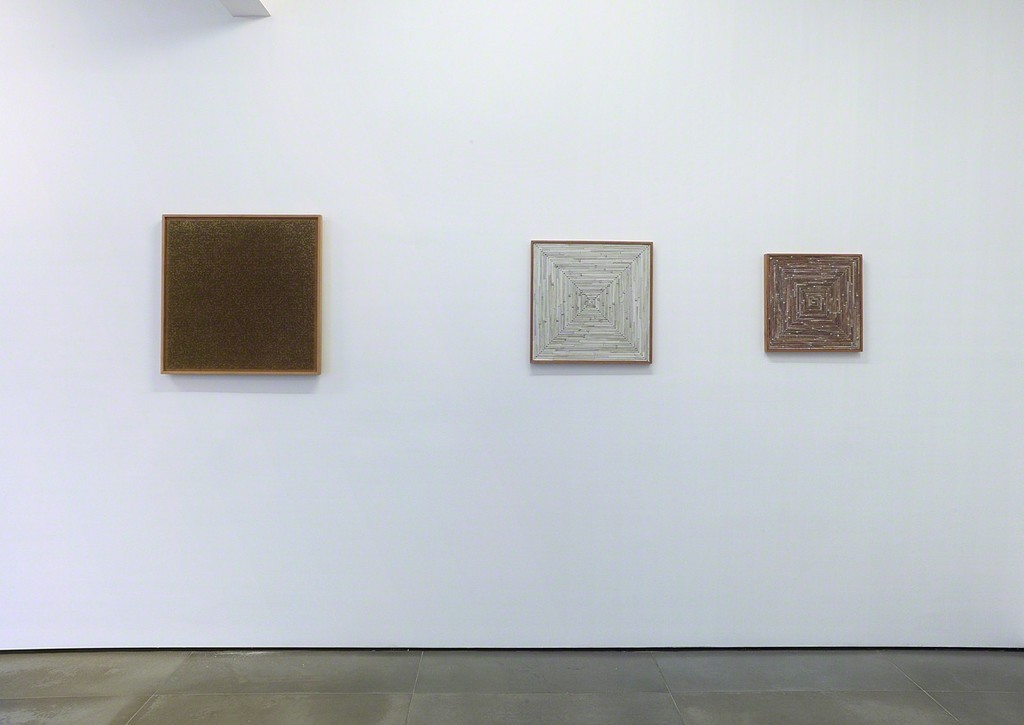 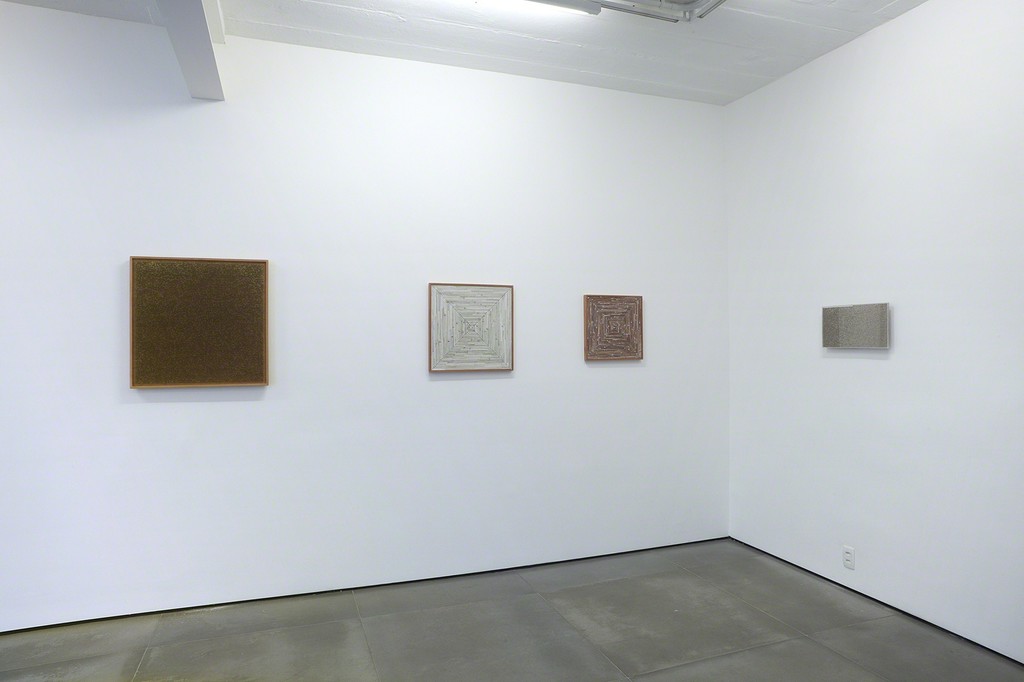 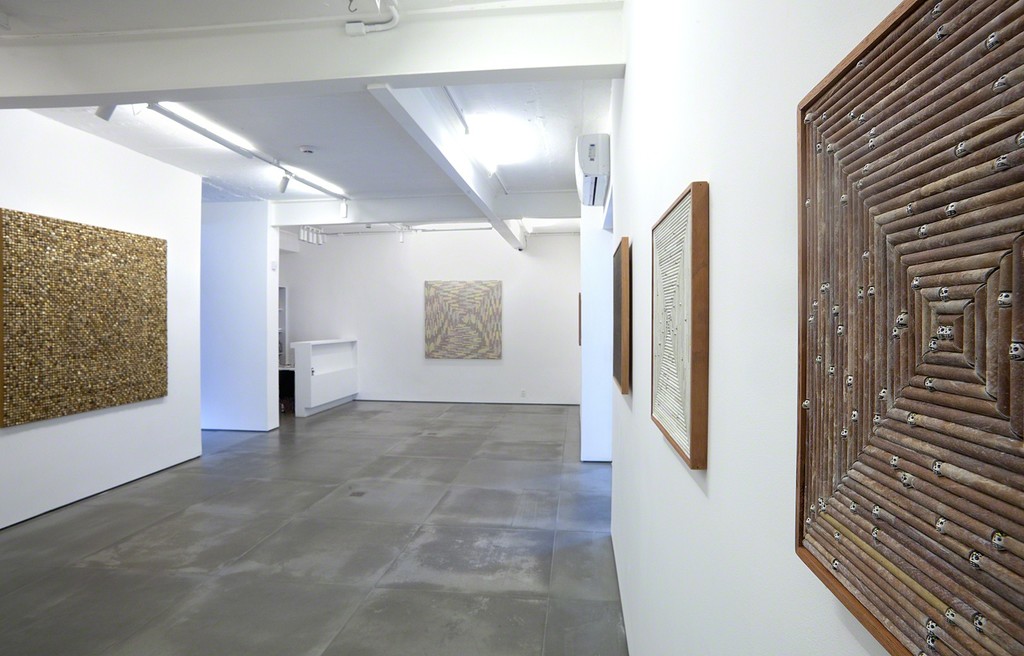 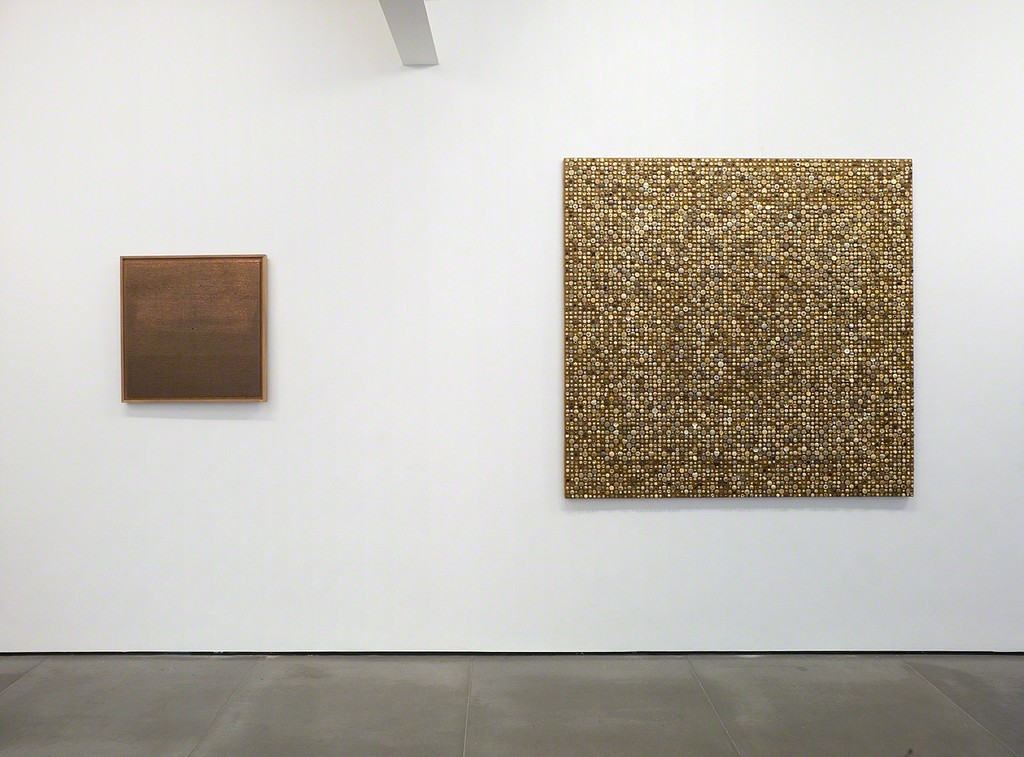 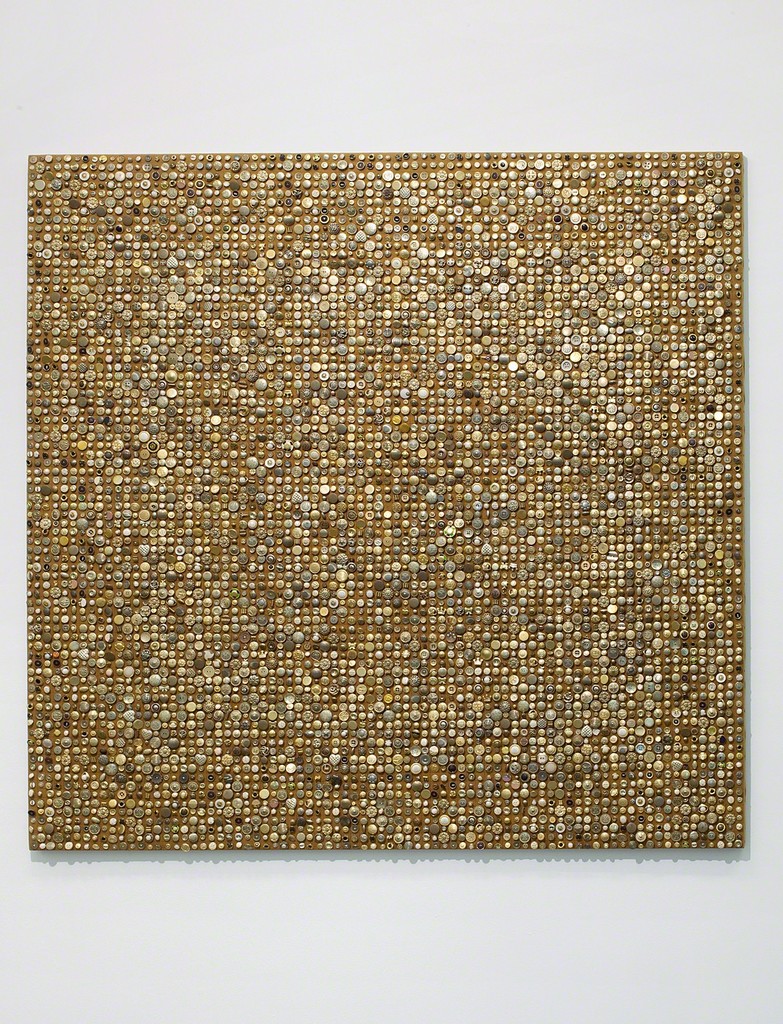 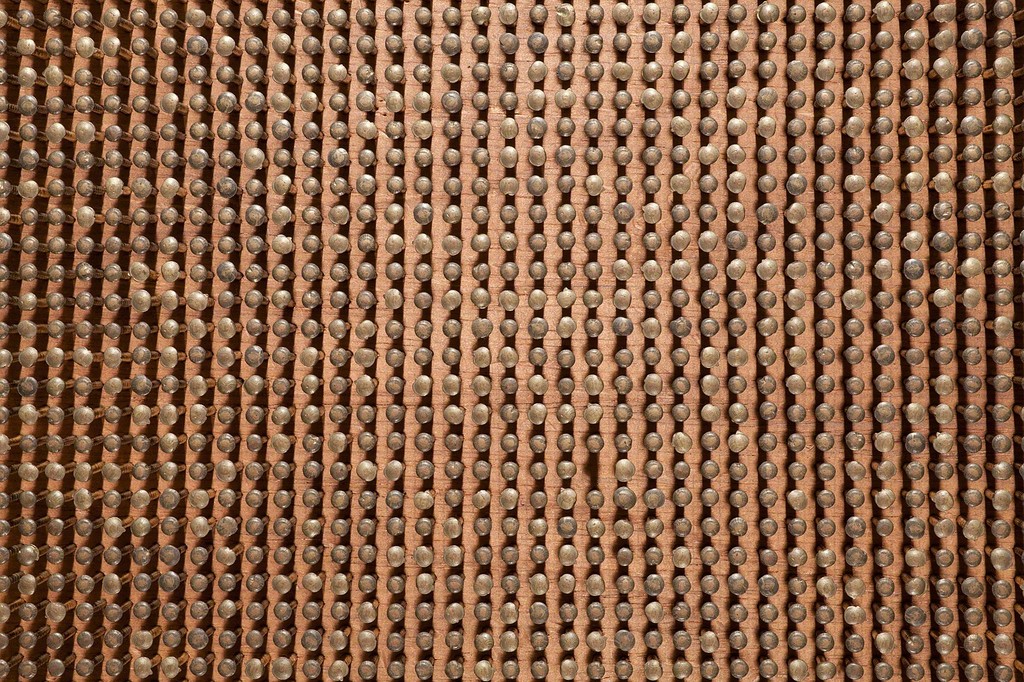 Pernambuco state native José Patrício’s first show at Galeria Nara Roesler in Rio de Janeiro will open on October 1, featuring pieces from a series and eight individual works created over the past ten years, with selected and wall texts from Felipe Scovino. Artworks using assorted techniques share the use of geometric patterns that form graphisms, combined with commonplace materials often discarded or not given much thought, such as buttons, paper pencils, nails, as well as the dominoes and dice that have become the artist’s trademark.

A new addition to Patrício’s work are smaller-sized pieces than, for instance, the ones featured in his last show at Galeria Nara Roesler in São Paulo, Afinidades Cromáticas (Chromatic Affinities, 2014), where all of the works shown measured 155.5 x 160.5 cm.

A new piece from the series, Afinidades Cromáticas - Dourados (2015), is the highlight of the show, containing a myriad of golden buttons of all sizes embroidered on an earth-toned backdrop reminiscent of old gold. The recent work was built from scraps of golden buttons that didn’t make it into the pieces from last year’s show. As light shines down on the metals, the piece takes on a striking brilliance.

Obra Cega and Obra Cega II, both measuring 67 x 67 cm, boast a glossiness that should change with time. Both are square wood surfaces, respectively covered with copper and tin nails, and display the sheen of metal materials in different tones, depending on their age. "Both the copper and the tin change over time, they grow tarnished from oxidation. This difference between the nails is already there in the piece: the newer ones are shinier, the older ones have darker spots on them. This is an element that must be incorporated by the piece,” states José Patrício.

The nails are placed very close to each other, “precisely and neatly arranged,” creating the effect of a tactile, monotonous, continuous surface. What makes the pieces differ from one another is the heads of the nails: the copper ones are flatter and the tin ones are rounder.

Another piece with shine, this time over a silver-colored surface, is Espelho (2006/2014, three editions plus an exhibition copy). Although it works with brightness, it is the smallest of the artworks shown in the show: 24 x 43.5 cm. It’s made of 6,274 metal pieces arranged inside an acrylic box the same as the pieces in the 112 Dominós series, set side by side in superimposed layers. They form a smooth surface that reflects images like a mirror, hence the piece’s name. But the reflected image is not perfect: due to the fragmentation of the pieces that form the reflective surface, what one sees is a fragmentary picture projected upon the silver-colored sheet.

Fourteen pieces shown as a single set are built from dominoes. Dominós - Série Branca (2012/2015) is an assemblage of small wooden boards measuring 32 x 32 cm, covered with dominoes coated with synthetic enamel and then automotive paint. "They started being done long ago, in 2012, and they were just lying around in my studio, so I decided to revive them with automotive paint, and it gave these monochrome pieces a new sparkle,” says Patrício.

Dominoes are also the raw material for Superfície Ondulada em Branco II (2011), which creates a slight undulation effect through the juxtaposition and wearing out of the paint. The white resin dominoes are applied to a surface in alternating tilted position. One piece is elevated on the left side and the next one on the right.

In itself, the way the dominoes are arranged creates an illusion of waves upon the surface, but so far the shape is more geometrical, due to the rectangular shape of the dominoes. To make this undulated visual rhythm more flowing, the artist applied a diagonal coating of white acrylic enamel. "After the enamel dries, I sand it to make the undulations smooth. Some of the pieces lose their domino markings. All that’s left is vestiges, traces of what the piece once was. So it’s a process of wear and tear that gradually reveals what the white paint had covered, and at the same time it erases the numbers from the pieces,” says the artist.

Whereas the dominoes are partially or fully covered in white enamel or sanded, the dice, numerical components with a strong logical visual quality, are placed next to each other to create rhythmic geometric patterns through the numbers on their sides. Such is the compositional form of the piece Mosaico (2014), a 58.5 x 58.5 cm square in which very small dice create visual patterns by agglomerating the numbers 3, 4 and 5.

With materials arranged following a preset rule that’s strictly adhered to, creating graphical effects, two of the pieces in the Vanitas series -- Vanitas - Notações em Campo Aleatório (2015, 52 x 52 cm) and Vanitas - Notações Ritmadas em Campo Aleatório (2015, 42 x 42 cm) – revisit skull images as reminders of man’s perishable nature. "The Vanitas (vanities), art expressions that underscore the finitude of the human being, tie together the first set of pieces thematically. When vanitas paintings first became popular, in the XVII century, the certainties of the European world were partly shaken by the rise of Protestantism. The paintings featured elements that were stern warnings about the brevity of life and the vanity of earth wealth and luxury, with skulls or entire skeletons a near-constant presence. José Patricio transposes this discussion to our days by working with the image of the skull (...)," according to the curator Cristiana Tejo.

Nothing better than to paper pencils that were bought worn out and faded from a stationery shop to create a rhythmic sequence interspersed with small ceramic skulls from costume jewelry. In both pieces, the pencils are laid out on top of each other in an outward spiral within square surfaces, enclosed in 45-degree wooden frames. The difference in notation between the regular random field and the rhythmic one is that in the latter, the skulls are placed at the end of each pencil, whereas in the regular one they are randomly placed in no particular order.

Following the same spiral organizational logic, this time inward, the piece Sete em Sete also uses buttons as the chromatic basis for composing a visual scheme. The buttons are all of the same type, and what differentiates them are the seven colors, arranged into repeating groups of seven buttons, always in the same sequence. At the end of the piece, each color has been used seven times in the patterning.

With this broad, varied selection, José Patrício debuts in Rio de Janeiro, and between the lines he praises commonplace things as an index and register of human existence. If, in his work, the artist’s hand gives way to commonplace elements, it does so to bring to the foreground the collectiveness represented both by how raw materials are brought together and by their very choice, since they are the outcome of labor from so many other hands. The combination of ordinary pieces, rather than the comprehension of the forging techniques created by man, creates image games to be completed by the figure of the spectator, which complements the artist’s.