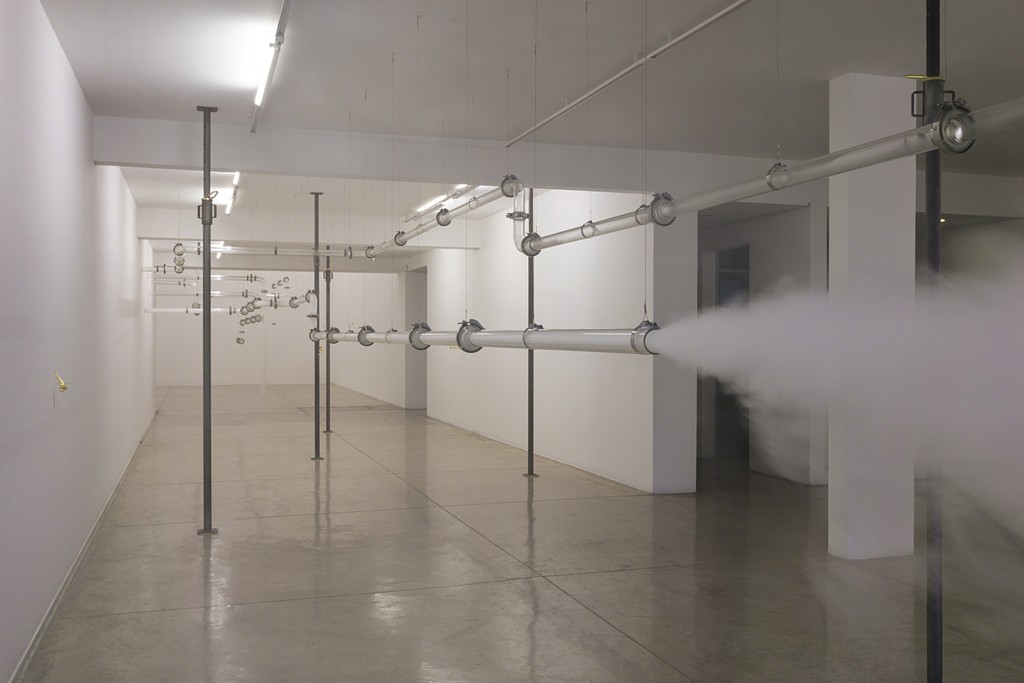 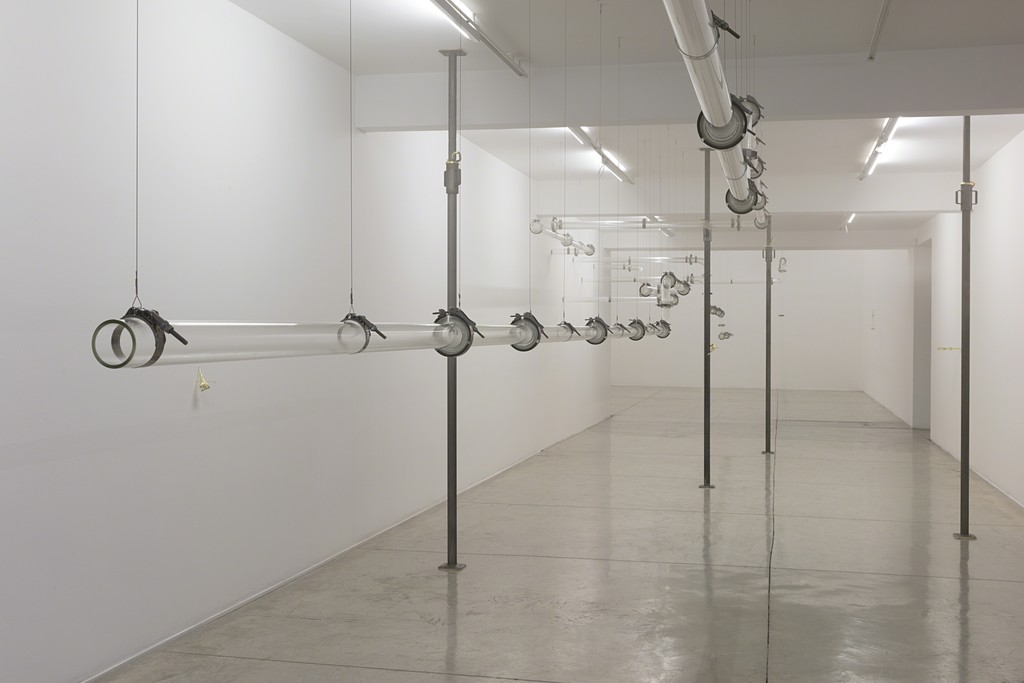 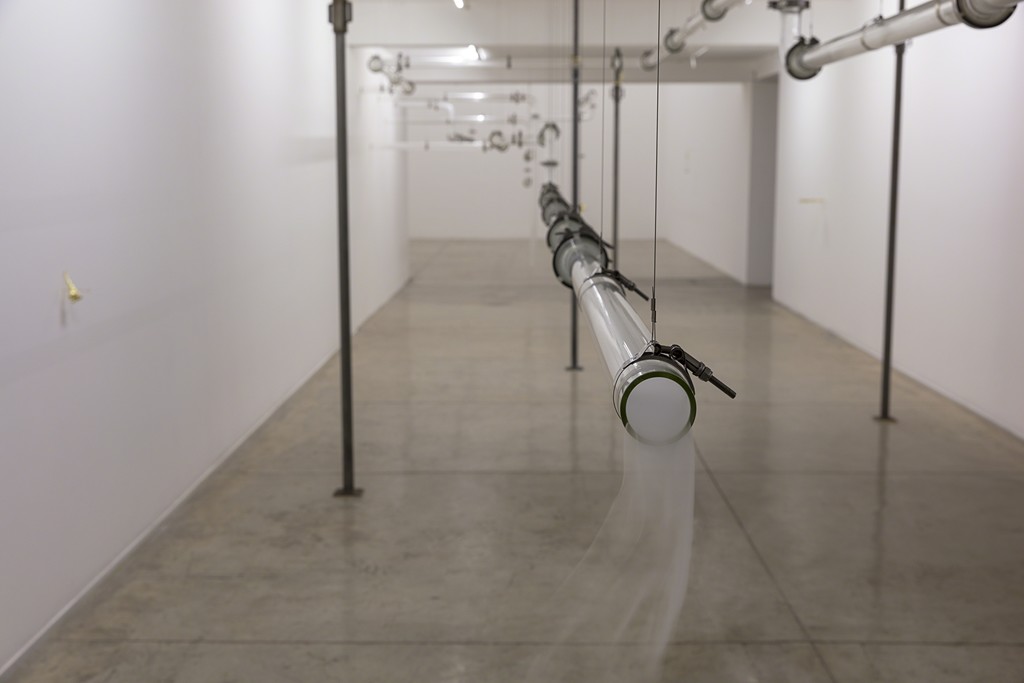 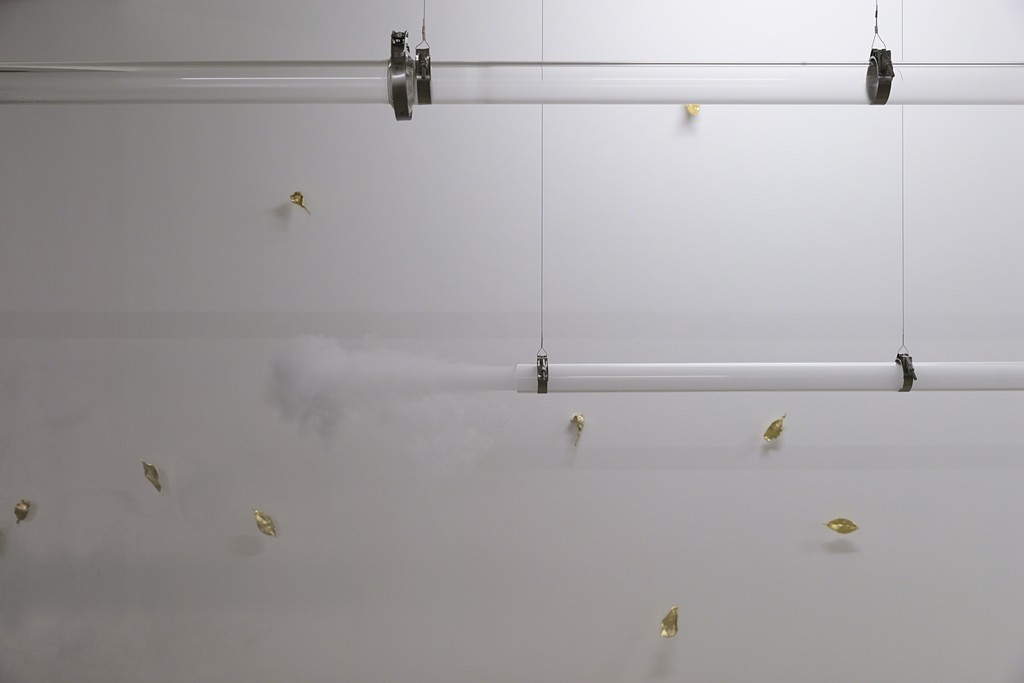 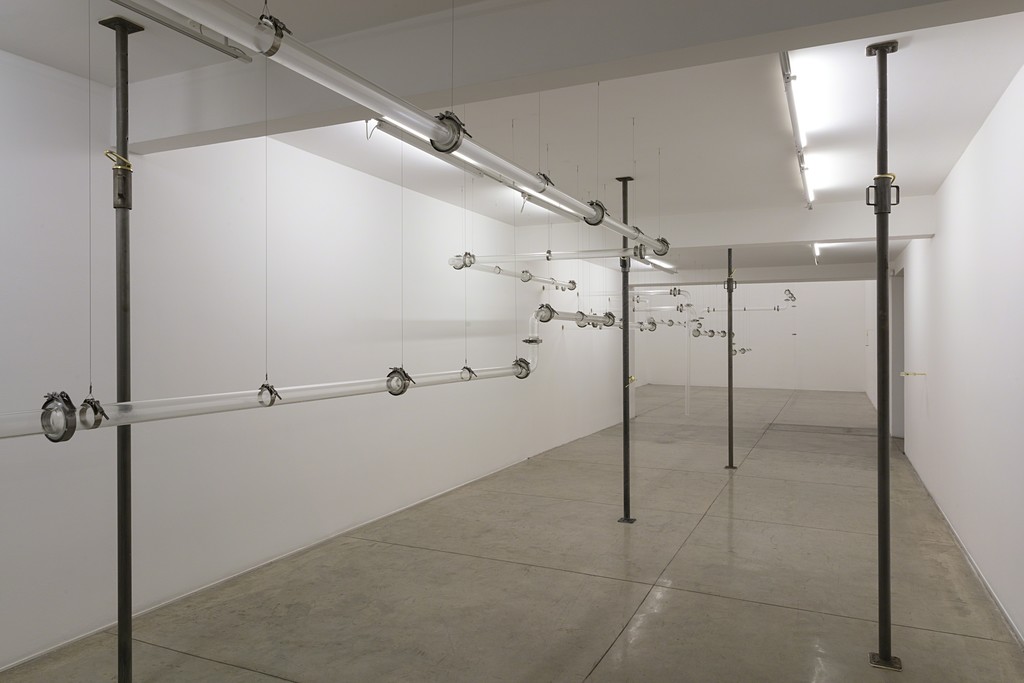 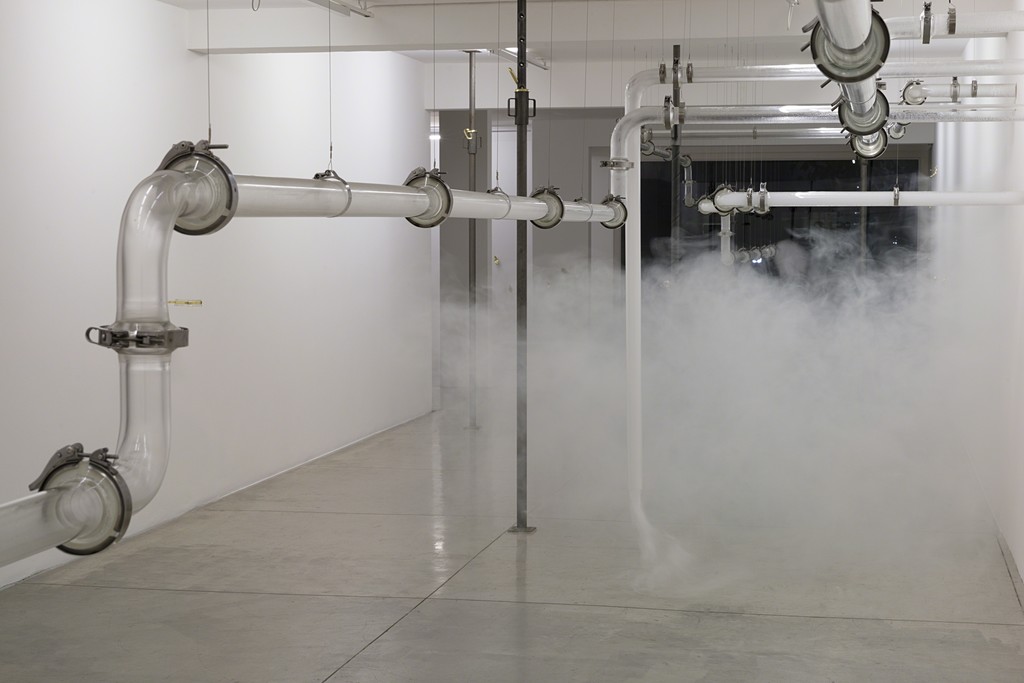 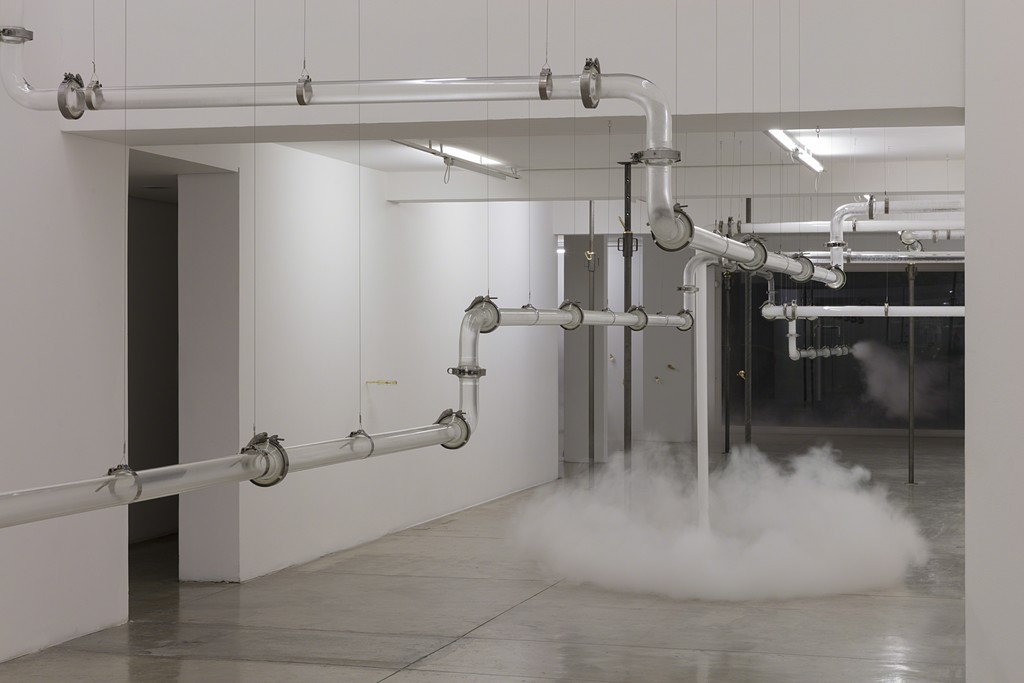 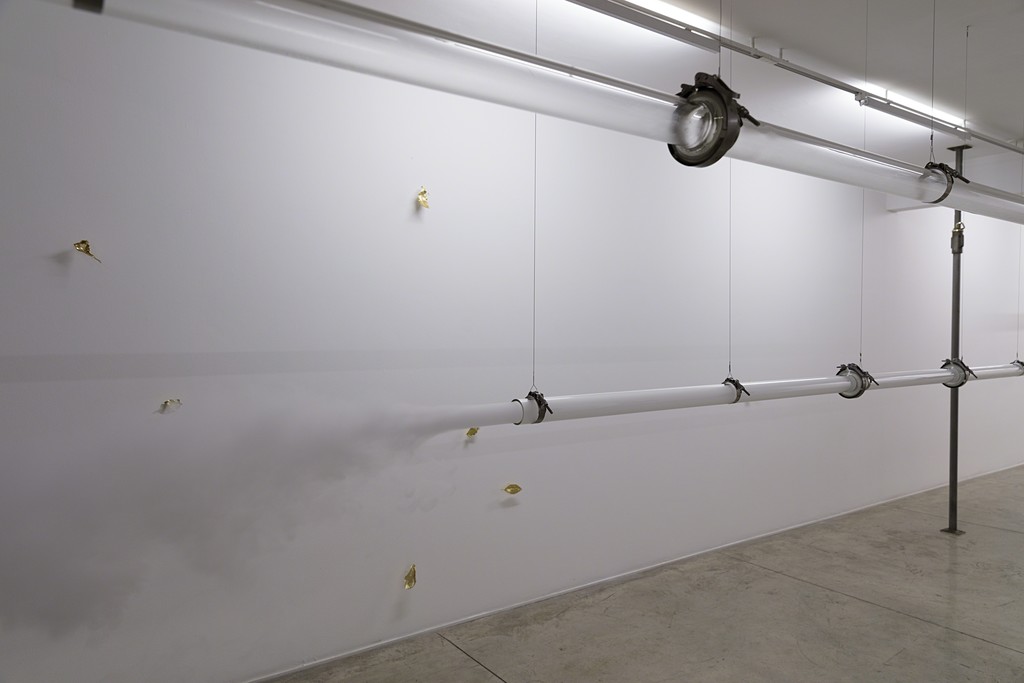 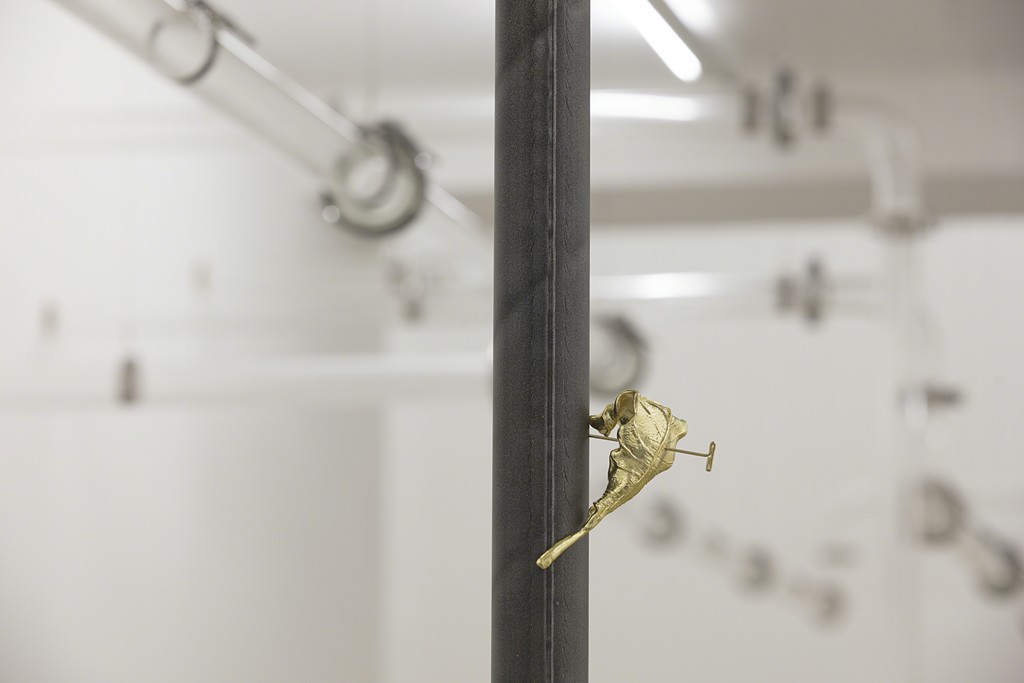 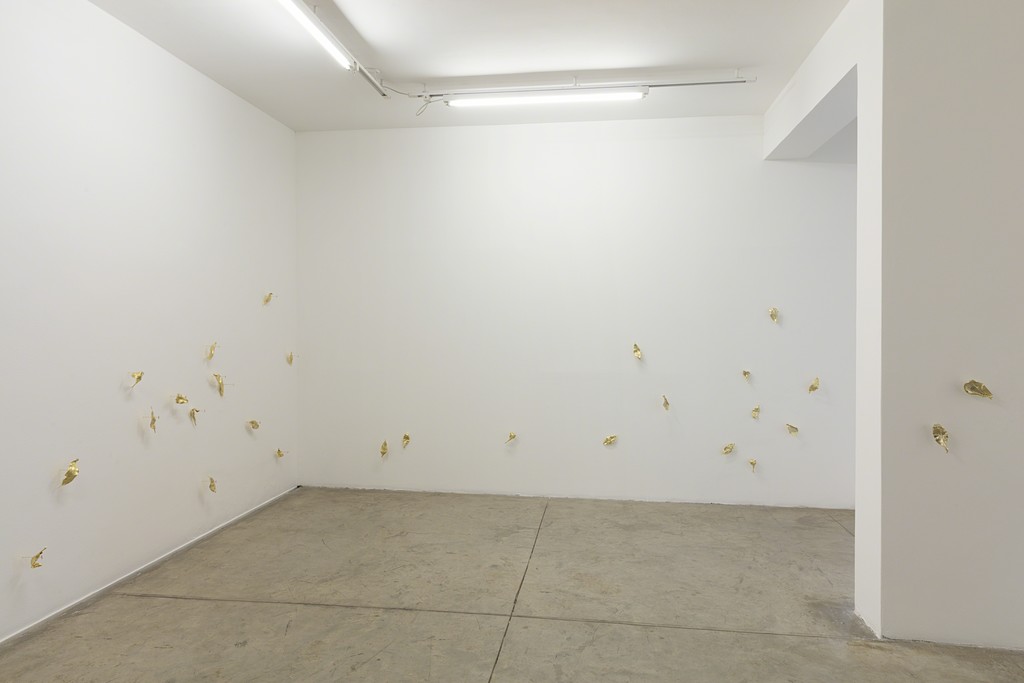 Galeria Nara Roesler opens the 2018 itinerary at its São Paulo headquarters with the installation Morro Mundo by Laura Vinci, and the solo show A Carne do Mar by Brígida Baltar.
Recognized for her particular, poetic and political narrative that centers on body, space and the ephemeral, Laura Vinci presents her work Morro Mundo, displayed at the gallery's Rio de Janeiro affiliate in the second half of 2017. Observed by the poetic powerhouse Carlito Azevedo who wrote a text on the piece, the installation occupies a large area with a mass of white smoke which invites visitors to the experience of being disoriented in the space and reoriented in their bodies. The installation's machine is programmed to release smoke as its presence sensors are activated, revealing itself to spectators via glass tubes that stretch throughout the entire exhibition space. Unlike other works that utilize vapor, such as the one the artist presented at MuBE and Beco do Pinto in São Paulo, in this installation the vapor is announced before it disperses in the air. As such, visitors can watch the smoke in a situation of control, before being engulfed in it.
In his text, the Rio de Janeiro poet Carlito Azevedo emphasizes the fact that Laura Vinci, with her works that are sensitive to different states and vibrations of matter, knows, however, that everything is smoke, fog, mist, haze. “A mist which here, in Morro Mundo, has high tides and low tides, and subjects us to a constant fluctuation in point of view. It is when the matter of the world dances in waves. When I say 'fog,' you say 'threshold,'” he adds.
The installation is also comprised of golden objects, which hang from supports distributed throughout the space, activating notions of the height of the ceiling and the distance between the walls. “These small objects are configured as hourglasses, compasses, maps and other tools of measurement which might help us to continue on our travels,” Laura suggests. The pieces carry small samples of garnet, stones which, by symbolizing impulse and determination, evoke a yearning for transformation.
“And while there is something that floats and levitates, these supports in Morro Mundo seem to suggest that there is also something that falls, threatens to collapse: the sky? The overhead weight? The horizon? Are they supports against disappearance? Against our helplessness, one beckons the artist? Do they sustain the machine of the world? When I say 'support,' can you say 'catastrophe'? It is interesting for us to peel away the numerous layers of a question as vigorously as possible. But those who hoist supports summon collapse, ruins. Morro Mundo is political and its dialogue with the present moment is intense. The invisible, the unseen, that which requires the protection of the stone (garnet) from the cloud of smoke and the support is addressed here in some way,” the poet underlines.
Azevedo recalls that, back in 2007, the installation Ainda viva [“Still alive”], in which pieces of set, long-lasting but not eternal marble coexisted with a scattering of apples in the process of rotting, demonstrated that the frictions or confrontations in Laura Vinci's work take place on subtle and complex levels. “And it's no coincidence that here we evoke the installation Ainda viva, whose name dialogues, ten years later, with this one, Morro Mundo , if we read Morro more as a verb, as the artist occasionally suggests, than as a noun. Morro Mundo Ainda Viva Living. Ainda Viva Morro Mundo ,” he concludes.