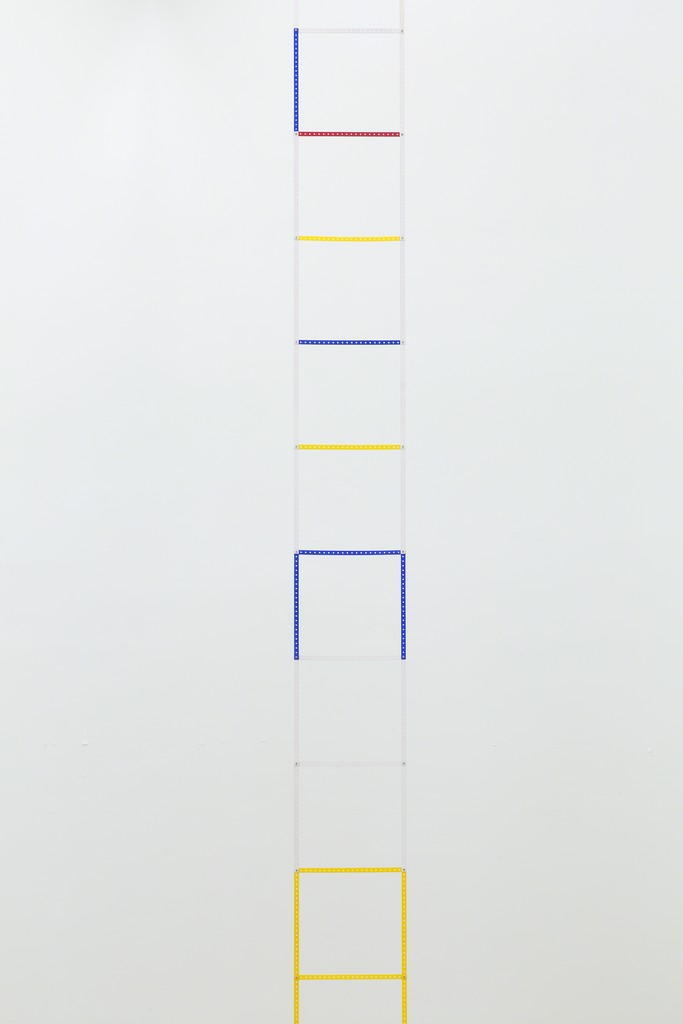 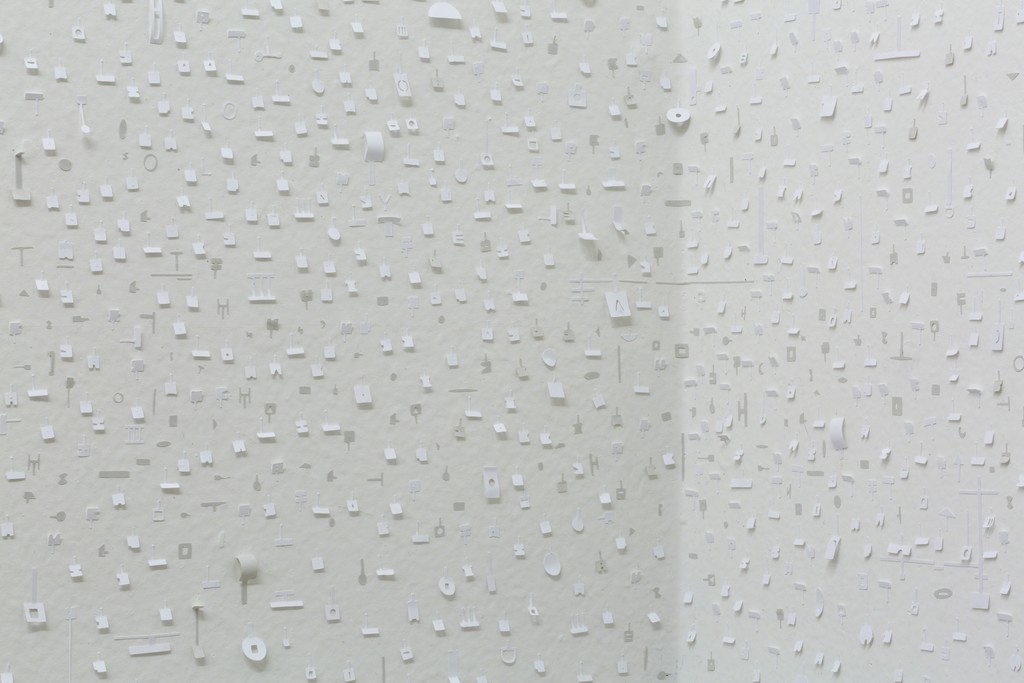 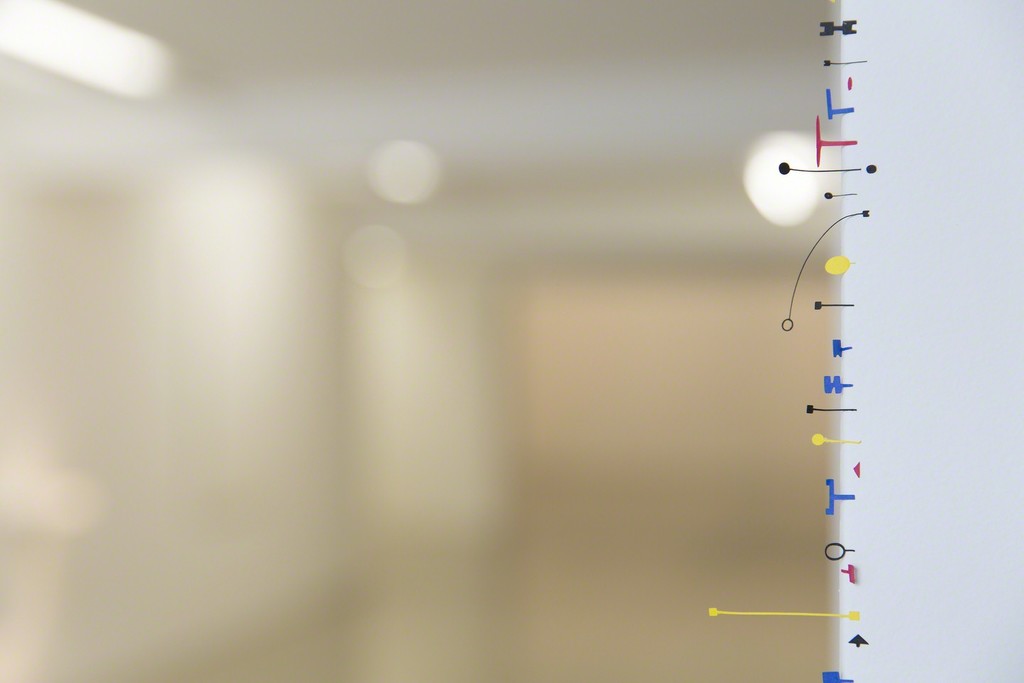 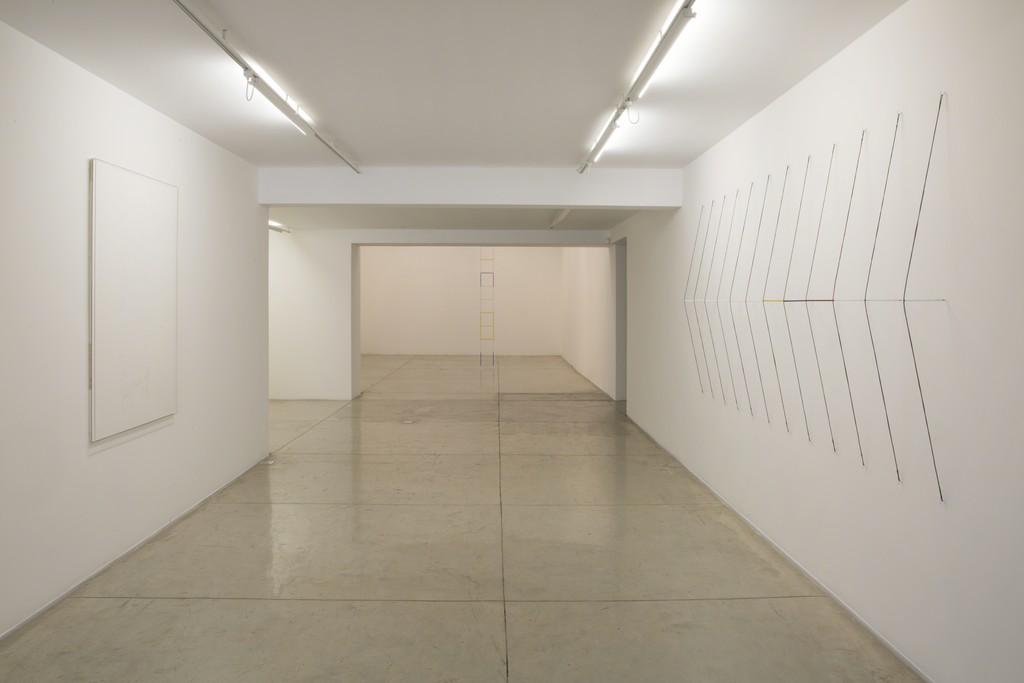 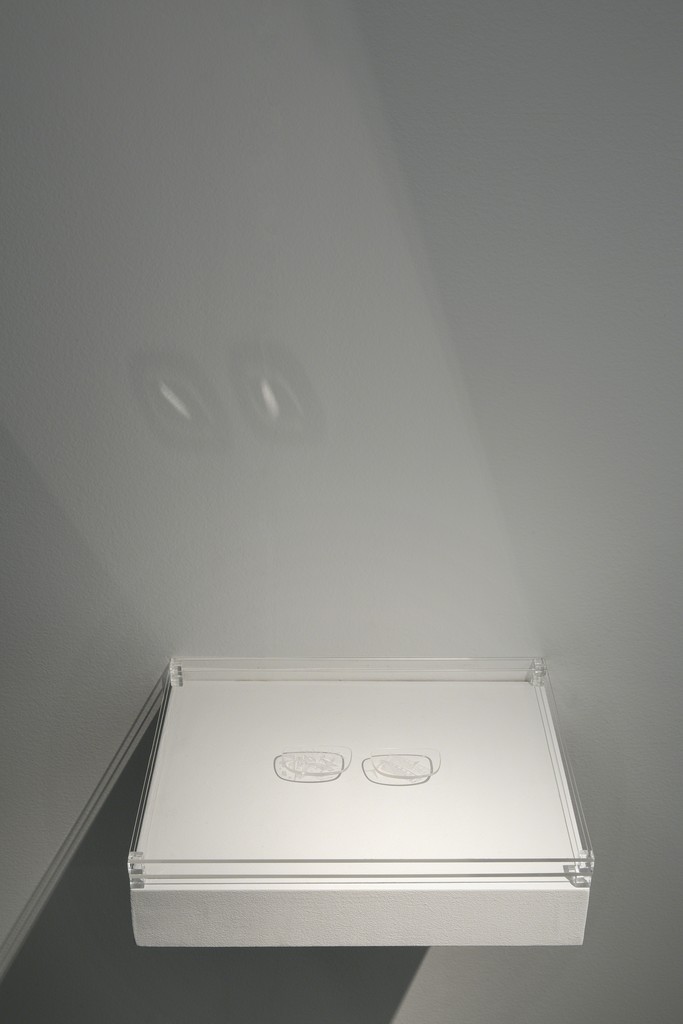 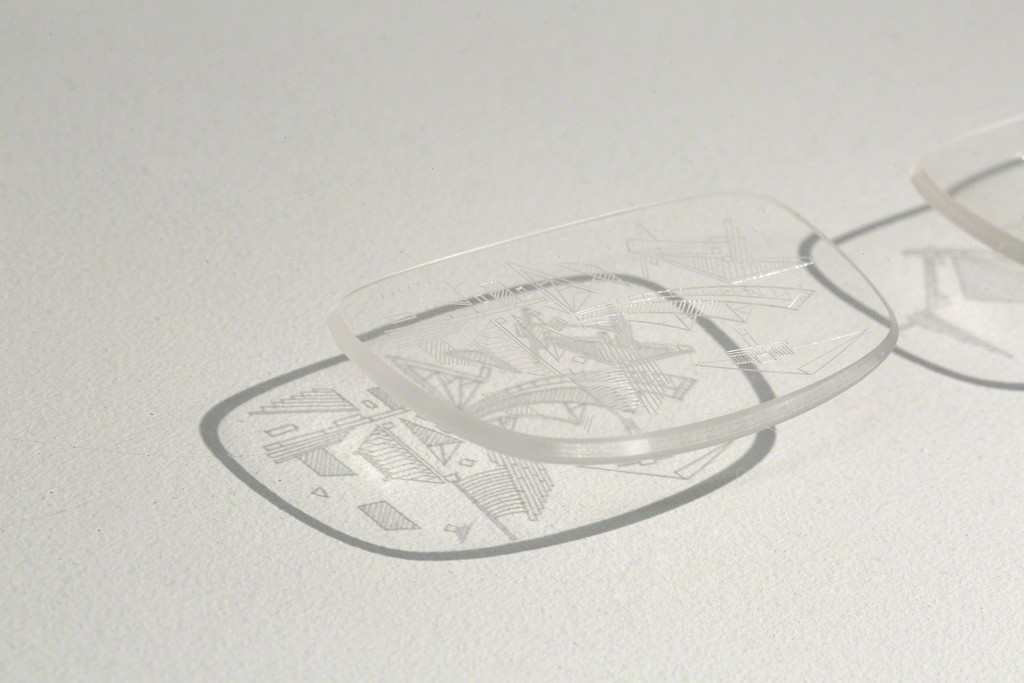 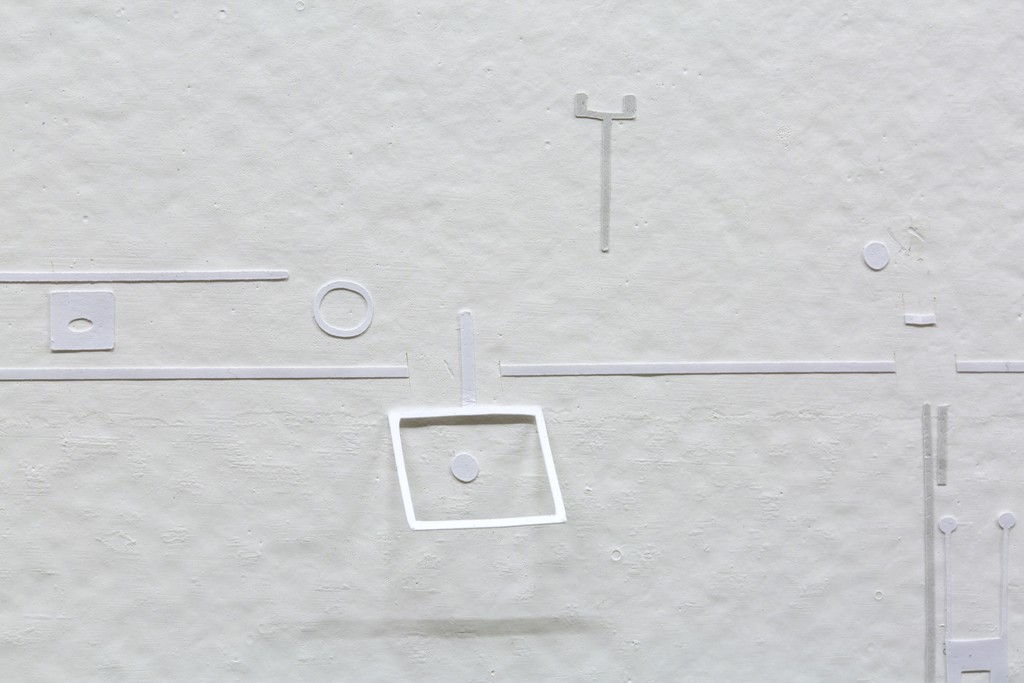 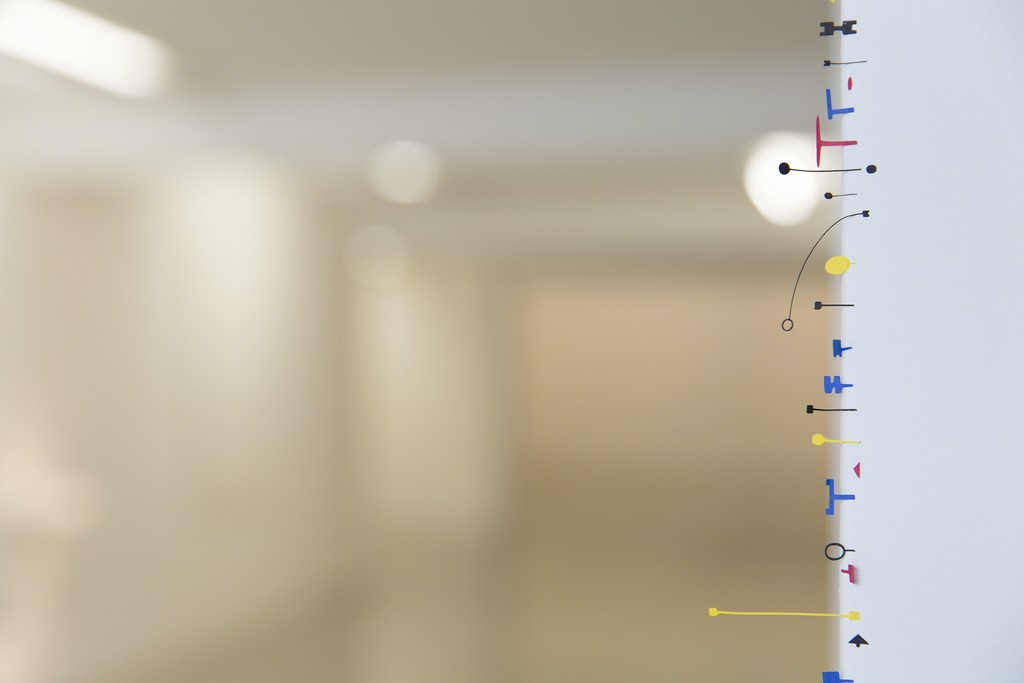 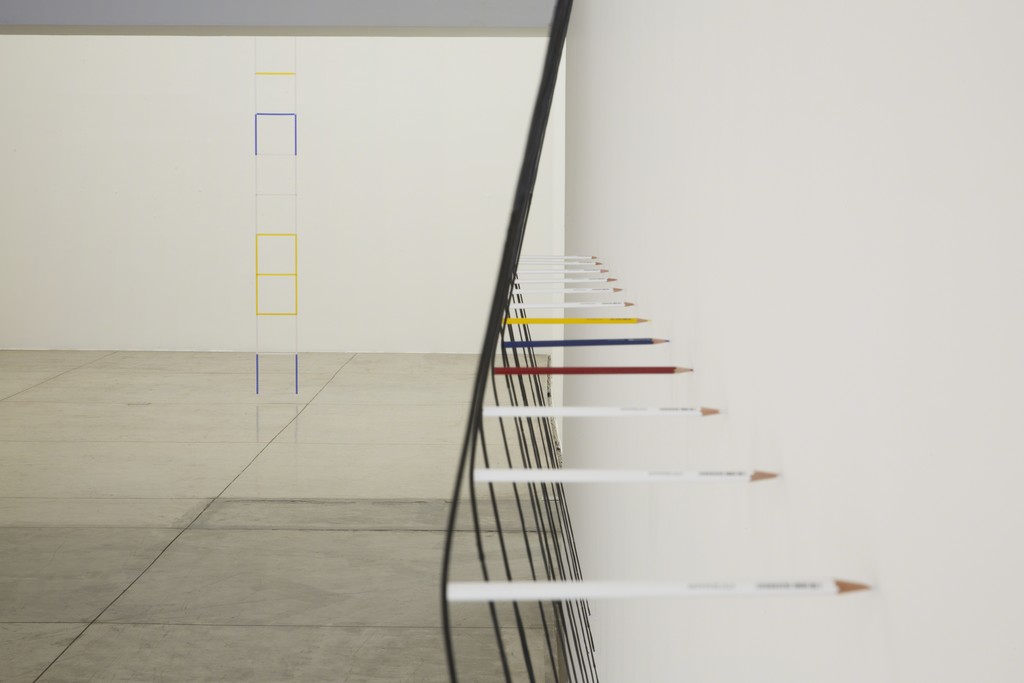 Marco Maggi of Uruguay was one of the artists selected for the ongoing 56th Venice Biennale (through November 22), with a show that fits inside a small suitcase. Now, in his second solo exhibition at Galeria Nara Roesler in São Paulo, set to open on November 14th, he will present a development of his piece featured at the Biennale.

The exhibition title, Uma frase com três cantos (One sentence with three corners), is a play on the word “canto” (meaning corner and chant in Portuguese) and references the large installation of stickers Maggi will create at Galeria Nara Roesler, a piece he alludes to as “a very long sentence with three corners.” It features the trademark elements of the artist’s research, including small paper cutouts whose seeming familiarity capture viewers’ attention. Nevertheless, the small and extremely precise geometrical structures mean nothing; they are only forms that require the attention of the eye in order to be viewed in their entirety.

This strategy invites the public to a slow gaze and a deep perception, with no need to arrive at a strict meaning. It makes the addictive nature of vision, and consequently thought processes, evident; especially in today’s world, where human beings are bombarded by a staggering amount of information they can hardly process. In the words of Maggi, “Everyday we are doomed to know more and understand less.”

The conceptualism of the representation shown in Venice, entirely black and white, is enhanced by the addition of primary colors, another staple of the artist’s output. The exhibition is composed of several black and white panels of variable dimensions, which contain selected snippets, cut in primary colors—blue, red, and yellow. When joined with black and white, they comprise the most basic color range, and when combined, they form every other color. Black and white cutouts are applied in contrast with the background at times, and in monochrome at others. This generates different volumes and shapes that resemble plans for imaginary cities or codes for signals that are beyond comprehension, and yet lures viewers into deciphering them.

Besides the paintings, Maggi creates an installation with these small markers and signals, in white as well as in primary colors, produced directly on the wall. Stacking Quotes, a recurrent piece in Maggi’s shows, is also featured here. It comprises a set of seven notebooks with small markers and signals in primary colors jutting out from between their pages, stacked on top of each other.

The installations made from pencils, attached perpendicularly to the wall by a rope pinned to the wall in an arched position, are represented in the show with a version containing 12 pencils, eight of them white, one red, one yellow, one blue and one black.

Dangling from the ceiling in the middle of the gallery is a 5 meter-tall staircase built from white Fanfold paper, in the form of a rope staircase. A few of the stair’s “steps” are black or made of primary colors. The intention is to have the larger structure of the staircase disappear from a distance, so that the colored steps appear to float. Once again, a sense of disagreement invites viewers to decrease the distance between themselves and the work in order to gain a better grasp of what they are seeing.

As Masp’s art director Adriano Pedrosa wrote in 2009, “The game Maggi proposes to us is full of big concealments and strategic revelations. One must take the time to look. (...) It is a silent, delicate, and slow game. Thus, we find a subtle political bent here, albeit masked by the beauty and the allure of the artwork. The slowing down is antimodern, antiprogressive, anticapitalist, antiurban and antiglobalization. (...) This feature of resistance is precisely why art becomes so fundamental to our daily lives.”