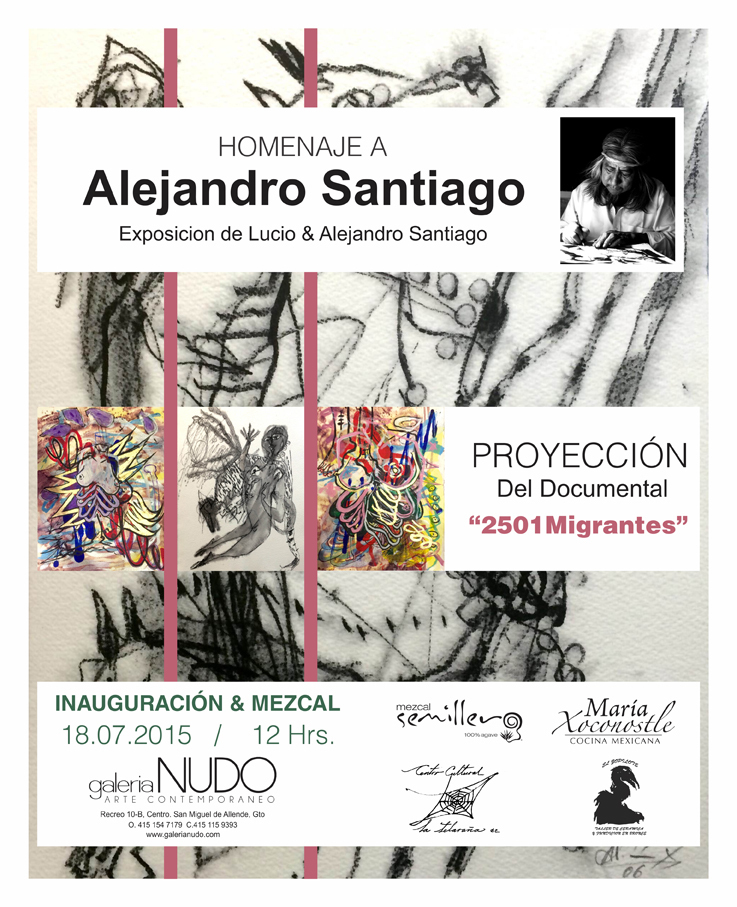 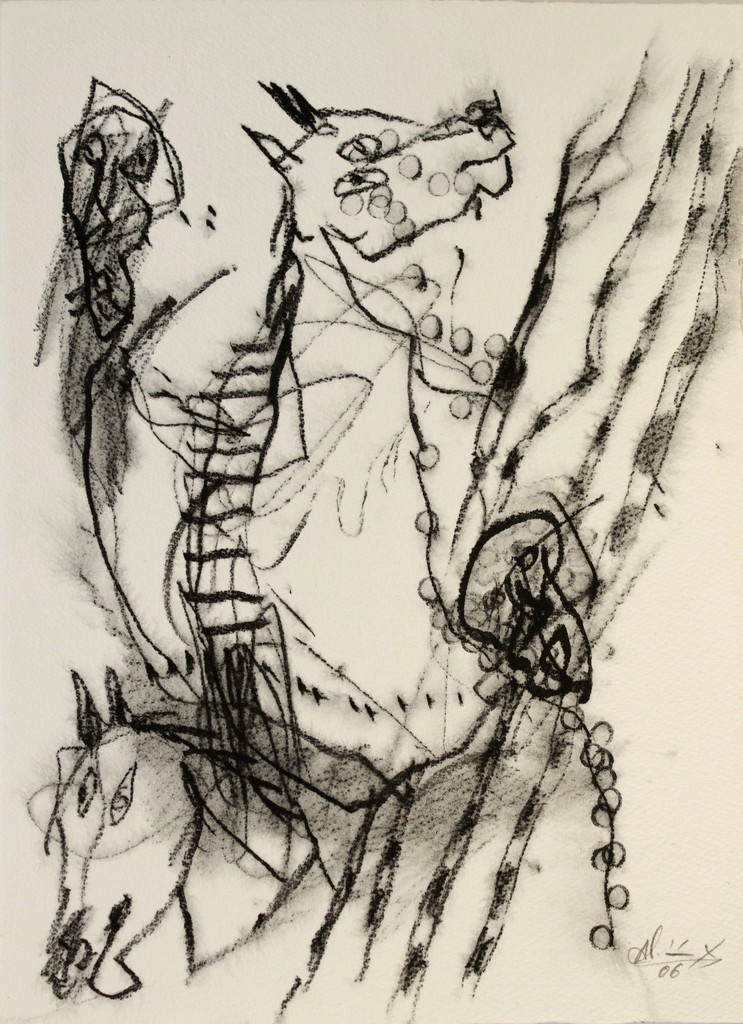 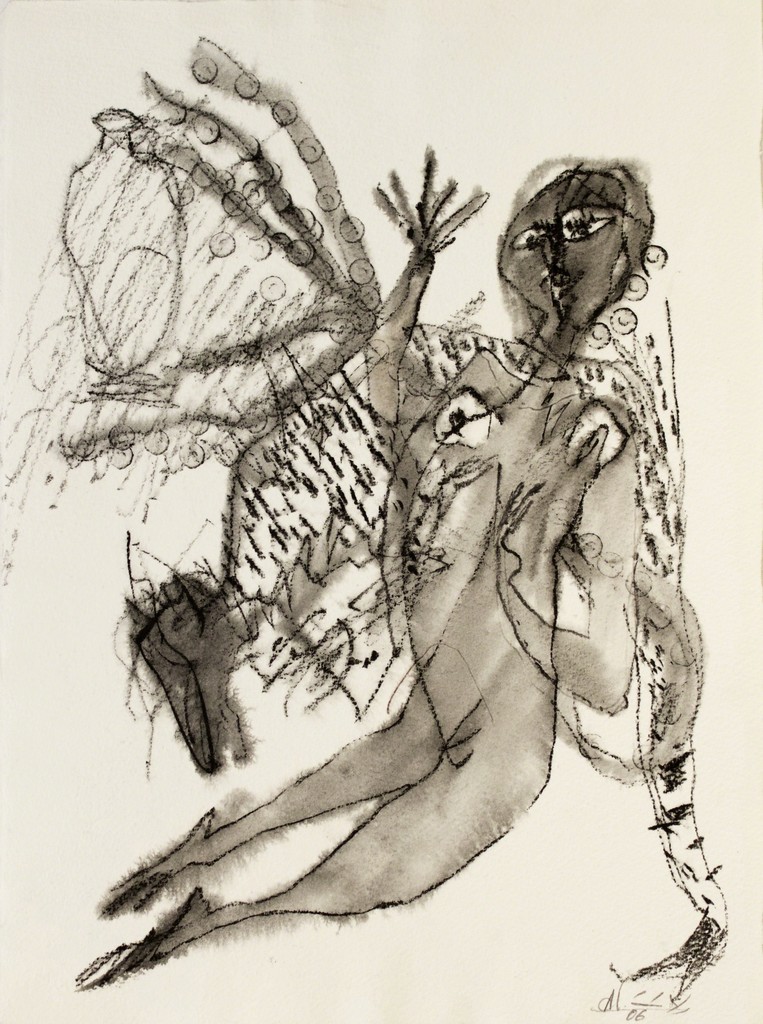 The exhibit we see today in Galería Nudo shows works produced by Alejandro Santiago in 2006 during a trip to Europe, which, as far as I know, included a visit to the Bienal de Venecia in Italy. For his part, his son Lucio Santiago also shows a series of works that were born from his recent trip, also to Europe, and especially from the artistic dialogues he held in the collections of the Louvre with diverse pieces alluding to Venus, or Aphrodite. Thus, we are in a position to appreciate how both creators, in finding themselves in front of classical or contemporary works, both maintain their own individual stances, their own styles, their own characters, without allowing themselves to be overwhelmed by either the great creations in the museums or by the most important artistic events on the Continent.

Lucio and his father made trips to Europe every year since the former was a child; indeed, they spent long periods there, above all in France, since Alejandro was concerned above all to create a style, within his own art, less limited by the commonplaces of folklore, into which many of the Oaxacan artists of his generation fell by trying to continue the school founded by artists like Rodolfo Morales. Alejandro chose to break with them and to create a freer body of work, which was continuously nurtured by artistic expressions from other regions of the world, so as to shape an aesthetic strategy and his expressionist stance to art. In this sense, he seems to have intensely absorbed the idea begun by Rufino Tamayo: “One must make art with both feet sunk into the ground but with both eyes on the cosmos.” Most of the artists who studied with Rufino Tamayo, before or after Alejandro Santiago, never really understood this premise and they devoted themselves to working the commonplaces of Oaxacan art, as much in its themes as in its style and form.

Thus Lucio Santiago grew up immersed in these ups and downs; his father would take him with equal enthusiasm to see artisans’ ceramic workshops or the woodcarvers who make alebrijes or the Bienal De Venecia or the Pompidou. Alejandro could obsess over the idea of seeing Montezuma’s headdress in the Museum of Vienna or of attending the opening of the latest Berlin exhibit of Anselm Kiefer or Jôrg Immendorff. This cosmopolitan spirit formed a pendulum between the world’s popular art and contemporary art or the classical creations of Western art; it shaped Alejandro’s unmistakable style as much as Lucio’s stance, as he explored graphics, installations and painting.

When we observe the work of both artists in the same room, it would seem that there is a certain geography that unites them; both emerge from expressionism; nevertheless, Lucio’s work is a sieve through which the idiom of pop also passes. These forms, simulating comic outbreaks, show the links present in his recent diverse series between the idioms of caricature, the comic book and the animated cartoon. Lucio’s work also originates from his sketches made in the the Louvre, just as Alejandro’s work consists of a selection of hundreds of drawings he produced on his trips. Alejandro never stopped creating during his world tours; on the contrary, he endeavoured to create reflections of what he experienced on his rambles in the diverse regions he visited. Instead of influencing him directly, seeing his own themes, like the nude, women and horses developed by the artists of the Renaissance or by the setcciento in Venice, helped him reform his own style of deconstructing and atomising the figure by adapting it to his irreverent line, dancing rings around the classical theme of the nude, for example. This is why, this being an exhibition in memory of his father, Lucio recalls this stance that fractures classicism and appropriates Venus by transforming her into an Earth goddess—a more Mesoamerican goddess. He achieves this in his development of the female figure; he makes it break up like Coyolxahuqui, carried away in the air by an explosion amongst the cactus. While Alejandro’s pieces make a iconoclast gesture at Western art and aesthetics, Lucio begins by appropriating the mutilated statues of Venus as a pretext and demonstrates his vision of the moment of violence experienced in Mexico by making the goddess of love into a stark image of our chaotic national happening.

Here, Alejandro’s watercolour drawings create a visual quality that at times approach pastel and charcoal, but whose chromatic discourse is much different from that to which he has us accustomed. In his oils and acrylics, Alejandro once again meets his son’s work since their color palettes connect in many compositions. In the trip when Alejandro made these pieces, Lucio accompanied him and recalls seeing him in the hotel’s bathroom soaking his paper so he could later use those watercolour pencils that generate such a varied range of visual texture. By then, Alejandro was completely absorbed by Oaxaca in the creation of his famous series of 2501 migrants and he needed a pause in this tireless effort to form his army of clay. Also in this year, Lucio was studying to be a printer and an engraver in the Ceiba Gráfica en Coatepec, Veracruz, where I was the director. In hindsight, we now understand that this was a watershed year for both artists. Lucio tended more towards the visual arts and gradually abandoned music, while Alejandro finished his most important work, that linked him to Mexico’s monumental creations, like the murals of Diego Rivera.

We thank Alcides Fortes, who is a close friend of both artists, to whose intuition we owe the creation of this space for creative dialogue between father and son, two years after the death of Alejandro Santiago.