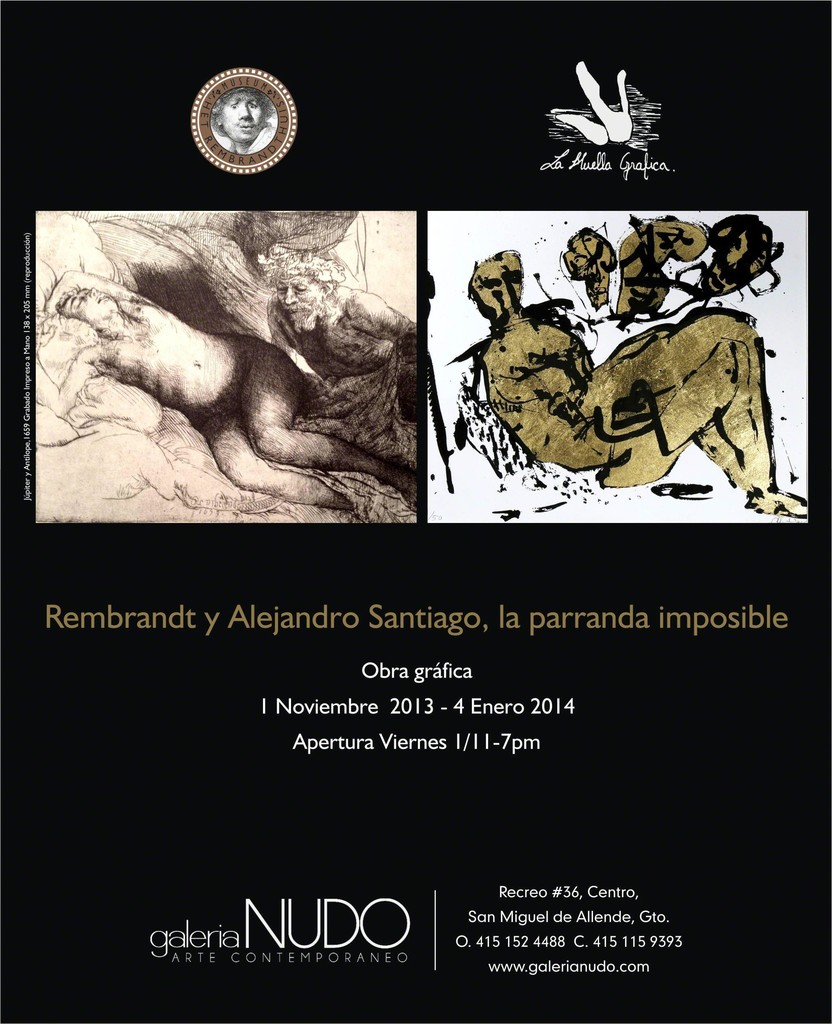 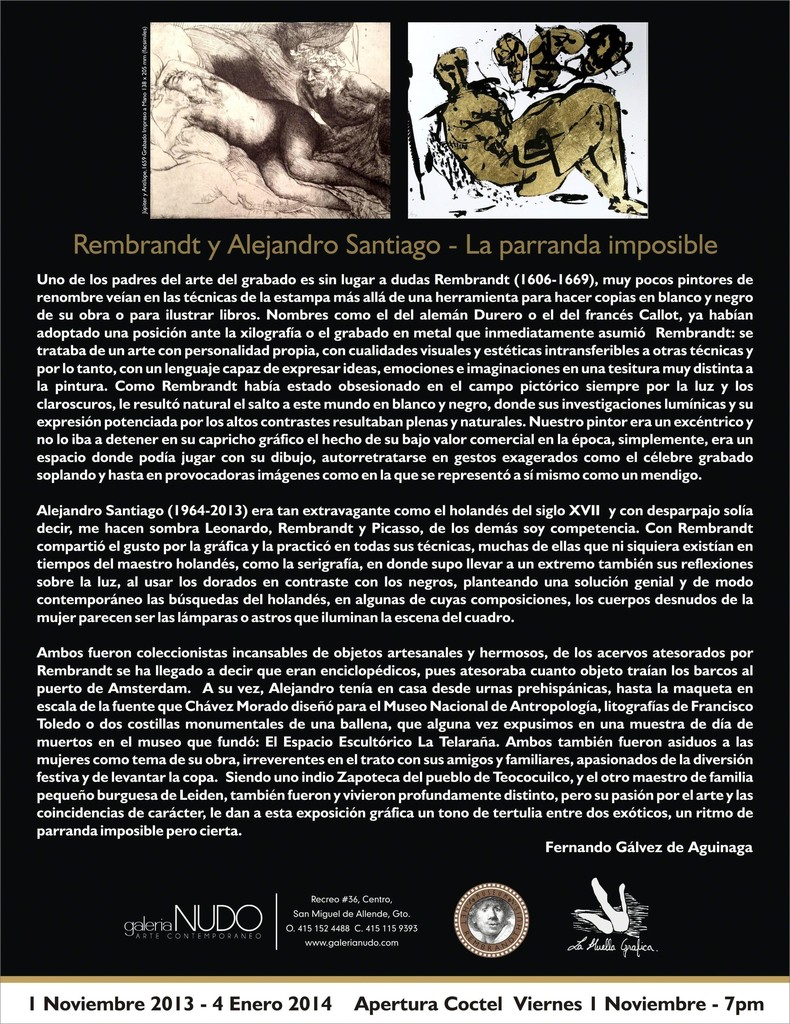 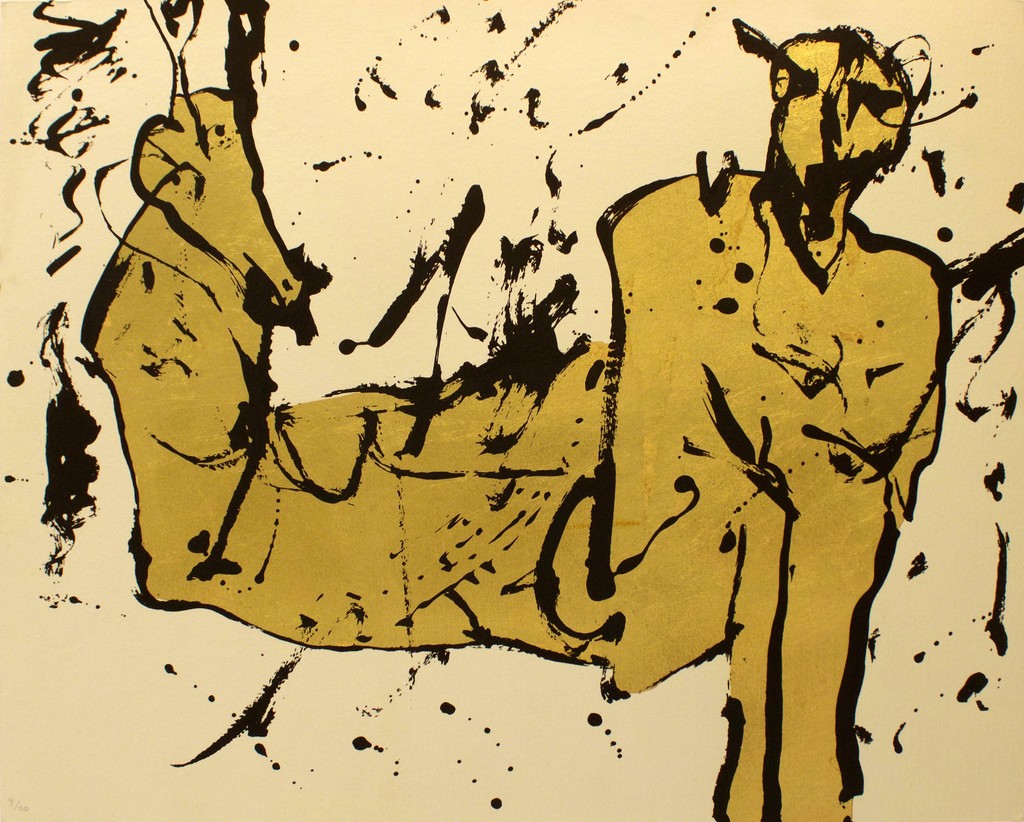 Rembrandt (1606-1699) is one of the fathers of the art of engraving, without any doubt. Very few artists of any renown at the time saw anything in printing techniques beyond a way to make black and white copies of their work or to make illustrations for a book. However, artists such as Durero or Callot had already taken a new position towards engraving in wood or metal that Rembrandt accepted right away. This was an art with its own personality, with its own visual qualities and aesthetic—its own capability of expressing ideas, emotions and imagination in a spirit distinct from painting. Since Rembrandt had been obsessed with light and shadow in his painting, it was a natural step for him to jump into this world of pure black and white, where his research into light—and its intensified display in high contrast—was natural and fulfilled.

Alejandro Santiago (1964-2013) was as flamboyant as the seventeenth century dutchman. He used to brag, “Leonardo, Rembrandt and Picasso put me in the shade, but I’m a match for anyone else.” He shared Rembrandt’s taste for graphic art and he exploited all its techniques—many of which did not even exist in the Dutch master’s time. Silk-screening, for example. Alejandro took his ideas on light to new heights with these silk-screens, where high-contrast gold and black points to a brilliant and contemporary solution for the Dutchman’s quest, remarkable in many of his compositions, of the nude female body that seems to be source light for the scene.

Both artists were dedicated collectors of beautiful hand crafts—the collection Rembrandt amassed is encyclopedic, since he collected whatever he liked from the ships docked at the port of Amsterdam. Alejandro’s home, in turn, had objects from pre-Columbian urns to the scale model that Chávez Morado designed for the National Museum of Anthropology to lithographs by Francisco Toledo and two monumental whale ribs, which we displayed at one time in a Day of the Dead show at the museum he founded—La Telaraña, Espacio Escultórico. Both artists were devoted to women as a subject of their work, irreverent with their friends and family and passionate about parties where they could raise their drinks. The one was a Zapotec Indian from the village of Teococuilco and the other was from a petite-bourgeois family in Leiden. Their lives were absolutely different but their passion for graphic art and the resemblance of their characters gives this show the air of a casual get-together between two romantics—an imaginary party, but a true one.

The mission of Galería Nudo is to discover relationships and communication in art, or to find the “knots” [nudos] that tie together disparate artists, trends and genres. In this spirit, we decided to create a bond between the graphic-arts lines of two geniuses—the great irreverent Dutchman, Rembrandt, and the great twentieth century Zapotec Indian, Alejandro Santiago. We know our show is culturally provocative but also that these two irreverent revellers would have loved the show’s passion and chutzpah. They both loved the printing arts. Rembrandt is of course among the first artists who saw the creative possibilities of engraving in metal, making works with this technique just as important as his paintings. Alejandro Santiago made graphic art since he was a boy and later exploited all the graphic-arts techniques. The Rembrandt images that we bring you today are facsimiles produced by the Museum of the House of Rembrandt in Amsterdam from the master’s original engravings. These are the pieces that are incorporated in the project, “Following Rembrandt’s Hand” that Nudo Gallery now represents throughout Mexico. The pieces by Alejandro Santiago are from his family’s collection—many are from his son’s workshop—La Huella Gráfica. Thanks to these people we have prepared a homecoming party for this pair of artists to meet through their creations. For us it is as if we were organizing a get-together of masterpieces—a true imaginary party.