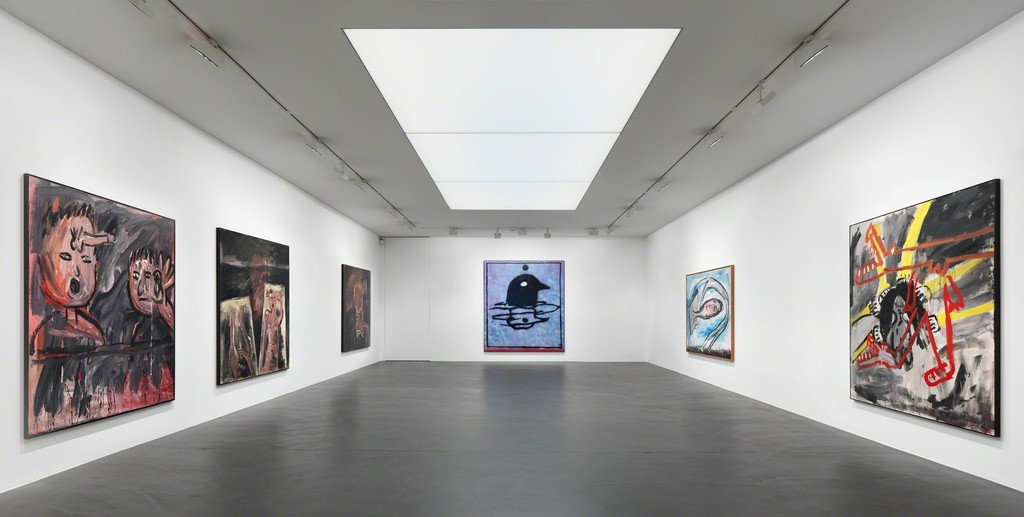 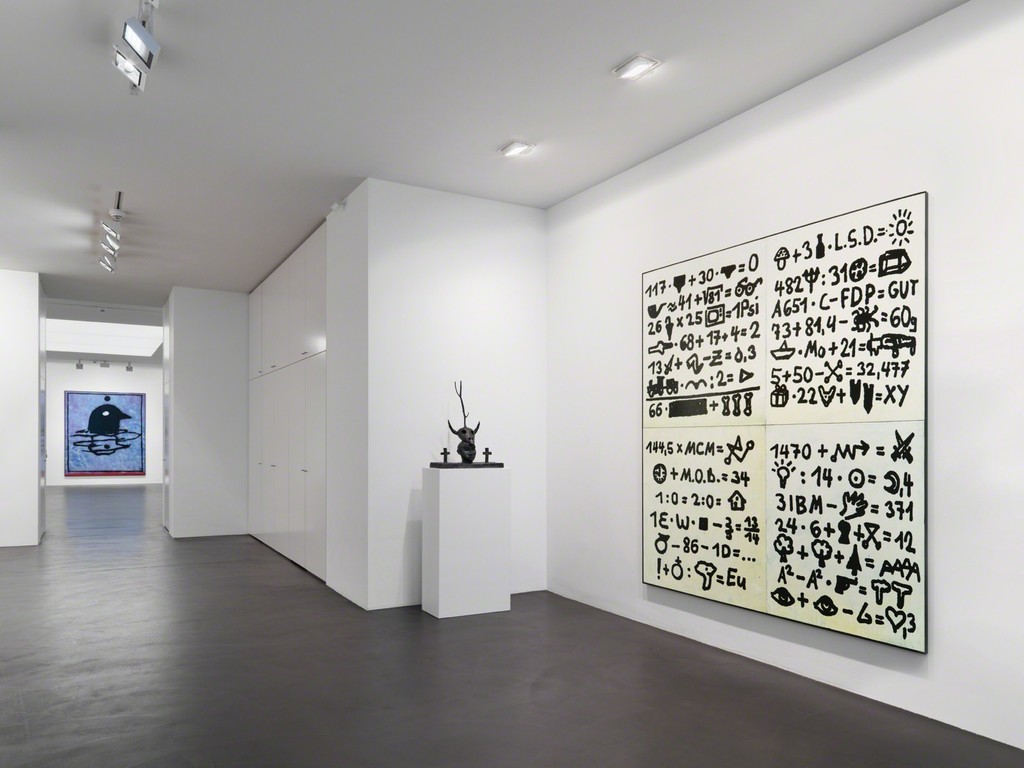 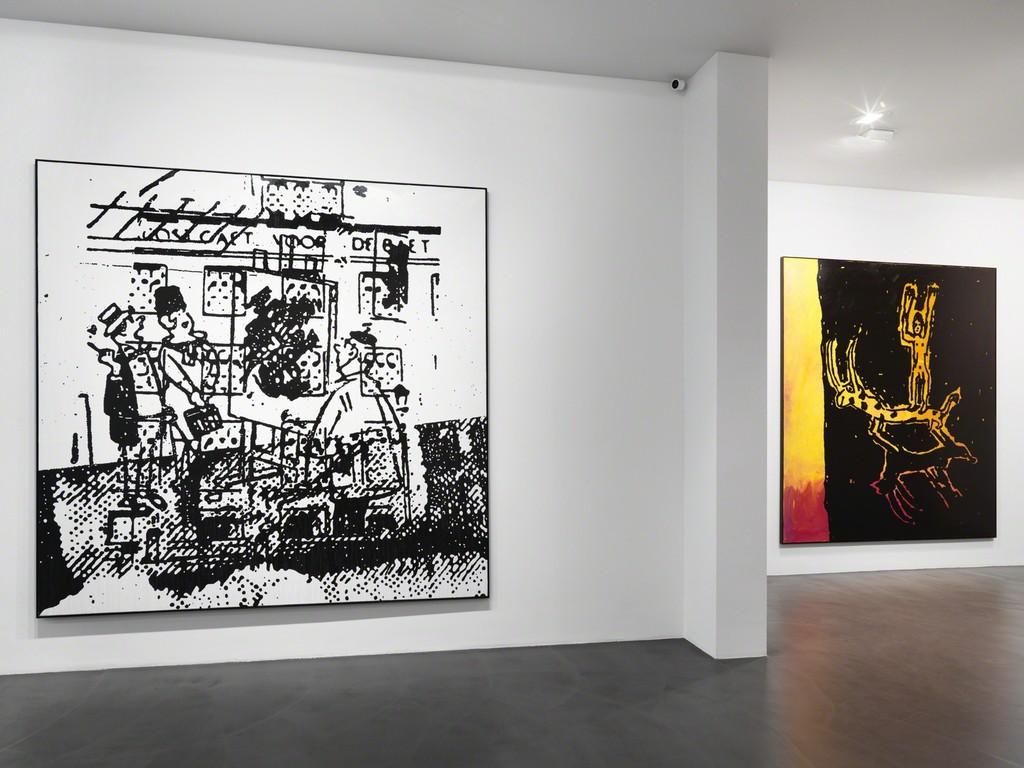 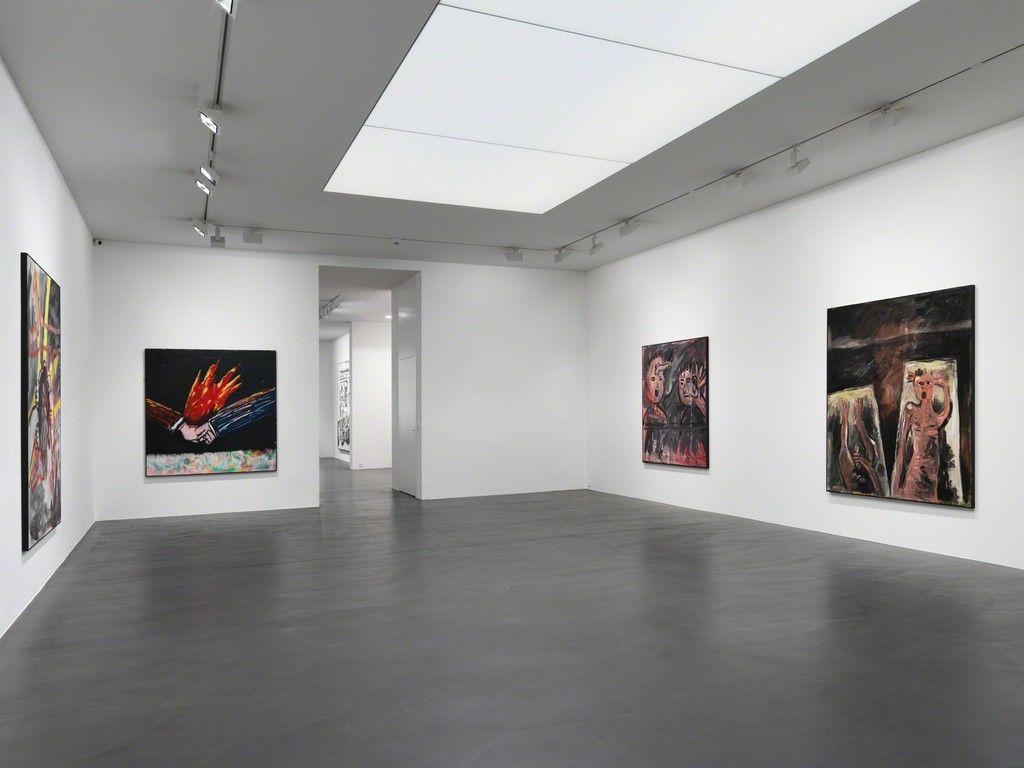 From 28 August to 28 November 2014, Galerie Andrea Caratsch will be
showing an overview of the work of Walter Dahn from the 1980s.
Walter Dahn was born on 8 October 1954 in St. Tönis near Krefeld, Germany.
From 1971 to 1977 he studied at the Kunstakademie Düsseldorf, where he was
the youngest master-scholar of Joseph Beuys. Beginning in 1979, along with
Peter Adamski, Peter Bömmels and Georg Dokoupil, he formed the group
Mülheimer Freiheit, a loose association of artists who were among the most
prominent forces behind the “Jungen Wilden” movement in the 1980s. Dahn
exhibited works with these artists in galleries and museums throughout
Germany. In 1982 he took part in Documenta 7 in Kassel as well as the
exhibition Zeitgeist at the Martin-Gropius-Bau in Berlin. Around this time, he
began to move away from the Mülheimer Freiheit group and establish himself
as a “solo artist.” Since then, his works have been shown in numerous
exhibitions in Europe, Japan and the United States. In 1995 Dahn was
appointed professor of painting at the Hochschule für Bildende Künste in
Braunschweig. He lives and works in Cologne.
Walter Dahn describes the Mülheimer Freiheit as a mixture of “an insane
asylum, a kindergarten and an art school”1 that was defined by a common
attitude: a radical conceptual and formal openness with a humorous and playful
deconstruction of all norms, preconceptions and assumptions for art in the
1970s, Minimal Art and Conceptual Art. In this context, an enormous artistic
breakthrough took place, which is thoroughly documented in this exhibition with
Dahn’s works from 1981 to 1983, as exemplified by Aus Schuhen werden
Krokodile (1981). At this time, Dahn maintained a close working relationship and
friendship with Dokoupil. Dahn illustrates the conflicting nature of these
relationships very bluntly in the works Hör genau zu (1981)‚ Portrait Dokoupil
(1983) and Flames of Friendship (1983). The vehemence of his discourse, both
in content and form, led to the “bad painting aesthetic” that continues to
influence an entire generation of artists to this day.
Dahn’s works from the late 1980s evidence a gradual and then increasingly
radical turn away from dramatic, thickly applied paint. On the other hand, these
works are characterized by an increasingly simple technique of representation
that emphasizes the subject matter and not painting itself. Looking back, Dahn
says: “The best thing that I did is when I stopped painting in order to paint and
made my first screen print.” The starting point and templates for these works
were collections of his own earlier drawings, articles, caricatures, reference
works on art history and anthropology, and much more. The selection of
subjects seems superficial and arbitrary; instead, the drawing—or the act of
drawing in its symbolic function—is the focus of his artistic efforts. Assemblages
of religious symbols (Afrikanische Dreifaltigkeit and Die natürliche Dreifaltigkeit,
both 1986) contrast with an ironic attempt to reduce life and art to scientific
formulas (Exakt erweiterte Naturwissenschaften, 1986) and the caricature as art
(Atelier, 1988).
When Richard Prince asked Dahn about his numerous styles, his answer was
very definite: “The content did never change (sic).” This is not “l’Art pour l’Art.” It
is about content, wherever it may lie.