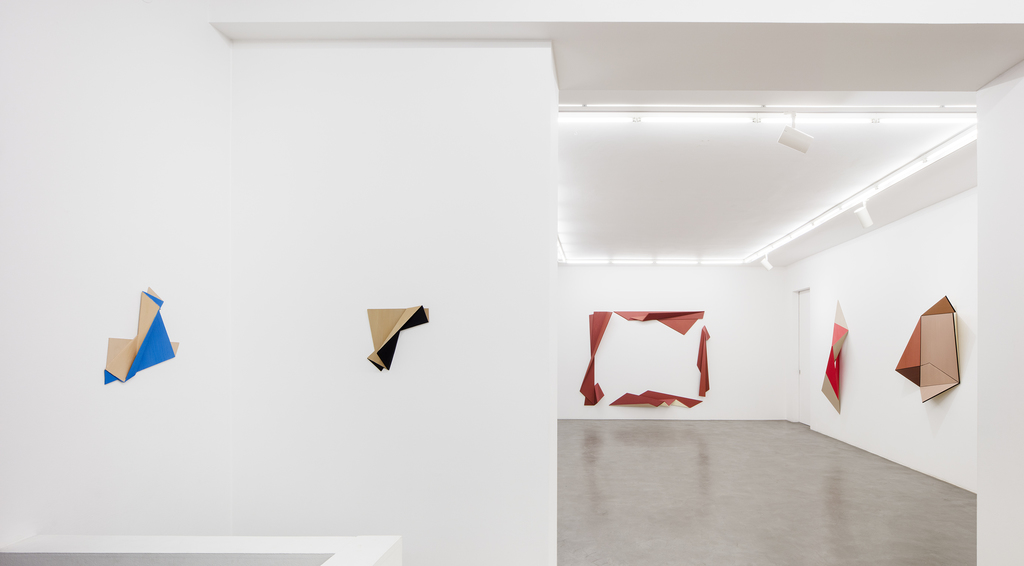 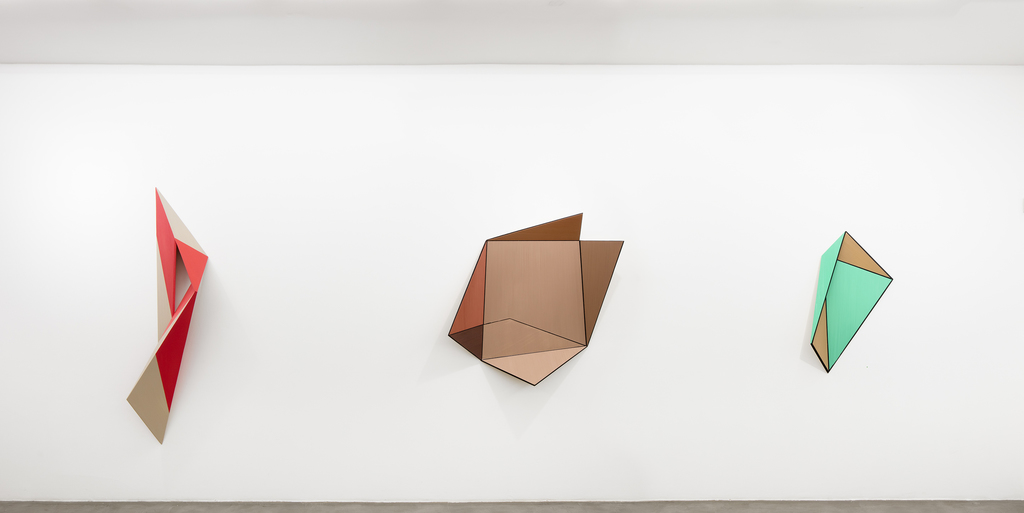 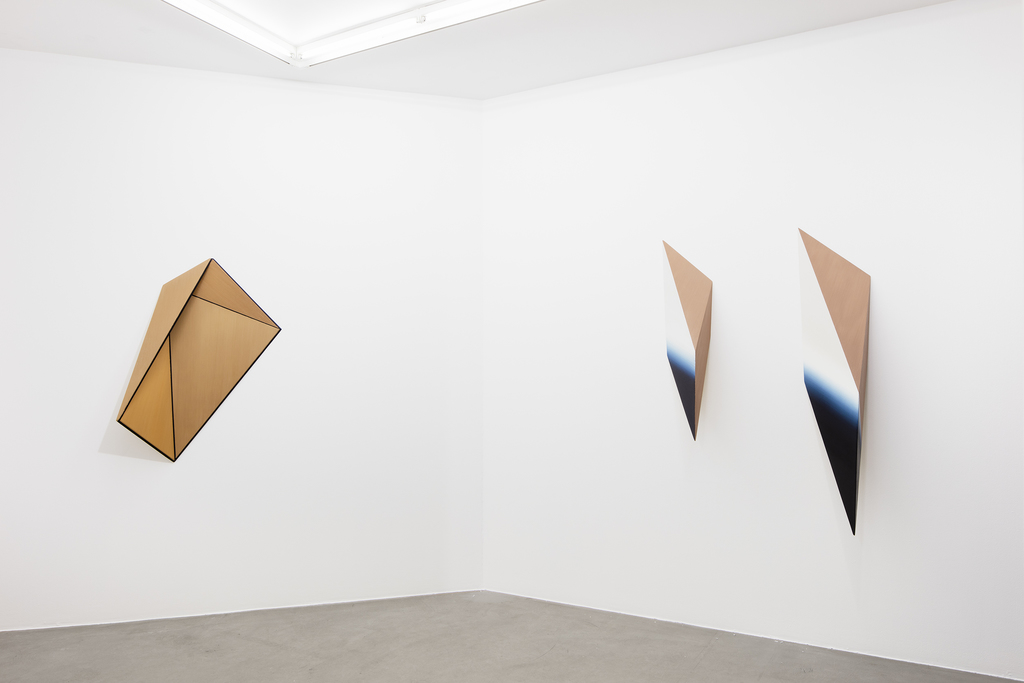 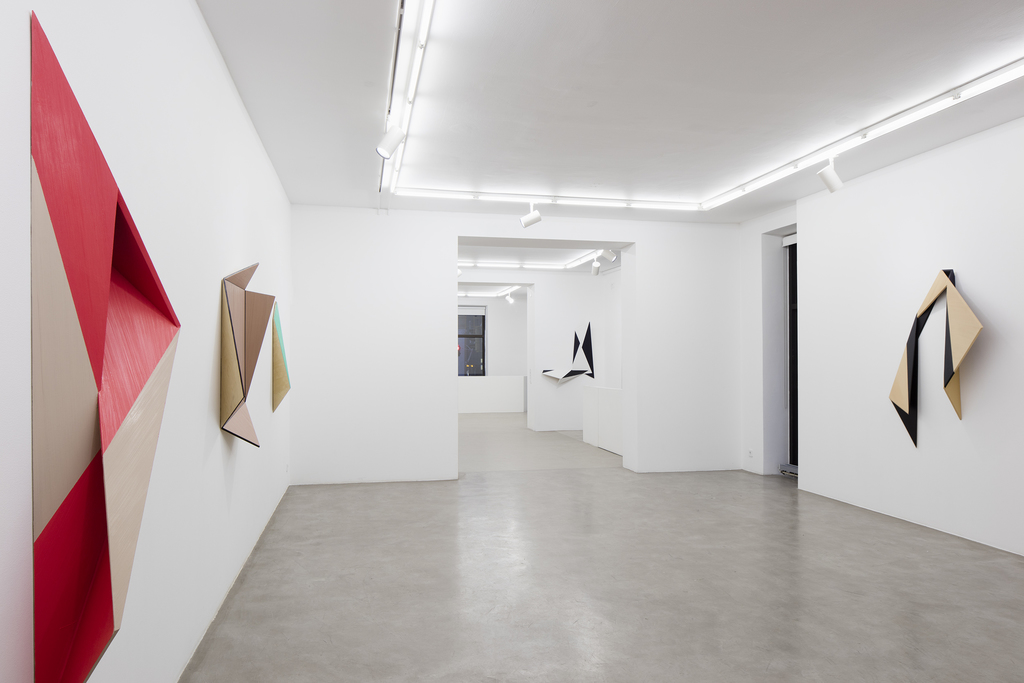 Jussi Niva’s (born 1966) first solo exhibition at Galerie Anhava will launch our programme of exhibitions in the spring season of 2020. This exhibition features three-dimensional works with freely folded painted surfaces. They give the impression of the painted surface having separated from its base and turning freely in relation to the wall and the viewer. The form of the painting appears occasionally to be suspended and at other times it hovers, rests or seems to rotate.

The title of the exhibition is Matter – at the same time concrete and abstract. It is no coincidence that the noun ‘matter’, the idea of abstraction in the sense of materiality and the verb ‘to matter’ are all closely related.[1] The artist’s palette combines heraldic and strong fields of colour with the material hues of soil, rust and clay. In his new paintings, Niva is interested in the balance between mass and visual space. These works merge their beautifully painted execution with a feeling of effortlessness and a precise rhythm that varies from one piece to another. Through the jointed painted surfaces something permanent and hierarchic in the order of the base and the surface painted on it is broken. The painted surface connects with the exhibition space upon its own terms and freely like matter with an inherent connection with reality.

As in his earlier series of works, also in the new pieces Niva is interested in and motivated by the idea that a painting is simultaneously a surface and a changing spatial experience: the nature of the works changes according to the viewer’s movements. The sharp folds of the paintings are where the surface changes direction. The works contain elements that are both similar to images and completely abstract, but a distinction between figurative and non-figurative is not, however, important. Instead, everything is related to the experience of the viewer when moving about in the exhibition space.

Alongside painterly expression Jussi Niva’s work characteristically involves thinking about the medium of painting, its form of expression. Connections with cubism, futurism and constructivism alike, as well as the Japanese origami tradition, can be seen in the works. Niva also mentions as his inspiration, among other sources, Dazzle camouflage paintings, a method of creating patterns developed by cubists that is based on altering the form and volume of objects by painting. During the First and Second World Wars it was used to make naval vessels difficult to observe. A characteristic of Niva’s works, however, is the consistent and strong presence of his own painterly thinking and expression, which is intuitive, rich, precise and light.

Jussi Niva studied at the Department of Painting of the Finnish Academy of Fine Arts from 1984 to 1989. He participated in the Kassel Documenta in 1992 and the Venice Biennale in 1993. There are works by him in several public collections, including the Kiasma Museum of Contemporary Art, EMMA Espoo Museum of Modern Art, the Aine Art Museum, the Sara Hildén Art Museum, the Malmö Art Museum and the Jenny and Antti Wihuri Foundation, and in many private collections. Niva has had recent exhibitions in Galerie Philipp von Rosen in Cologne (2019), the Faur Zsofi Gallery in Budapest (2018) and Salon Dahlmann in Berlin (2018), among other venues.