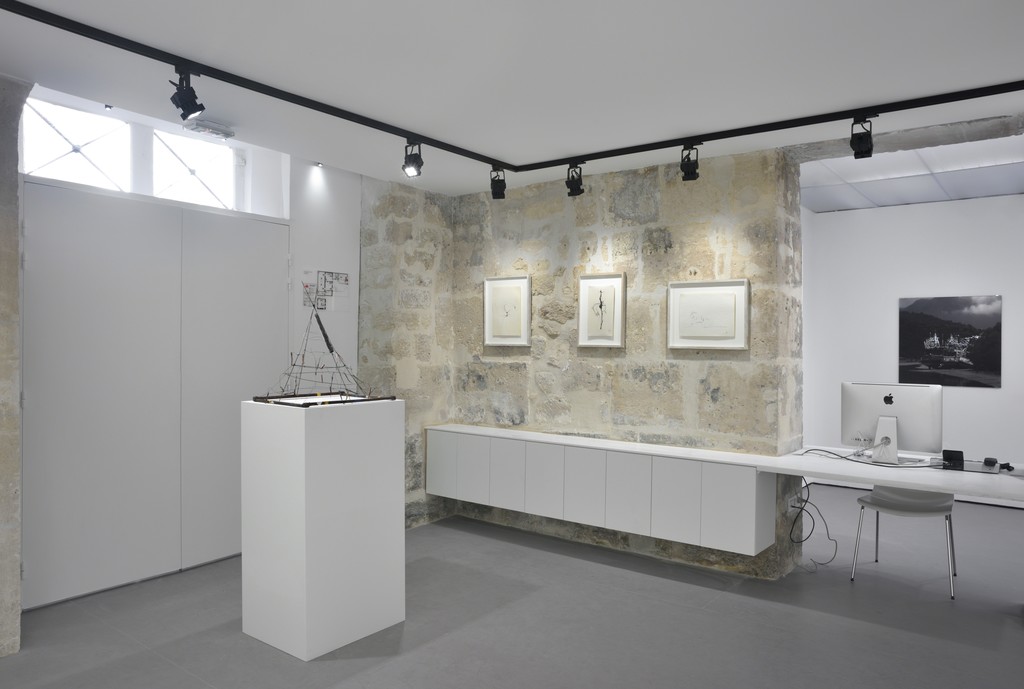 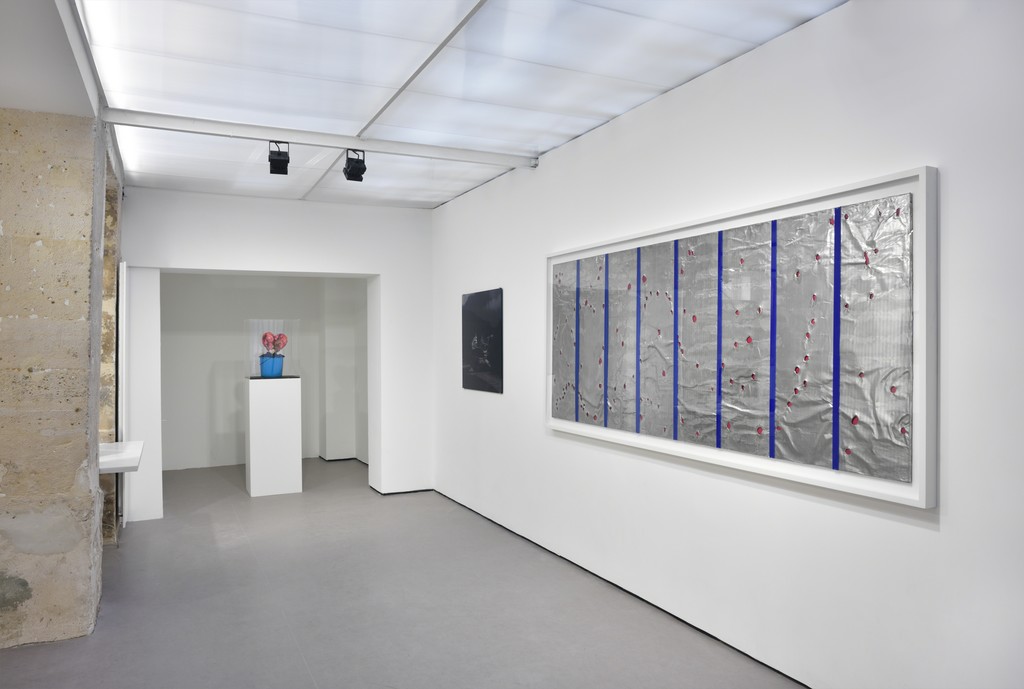 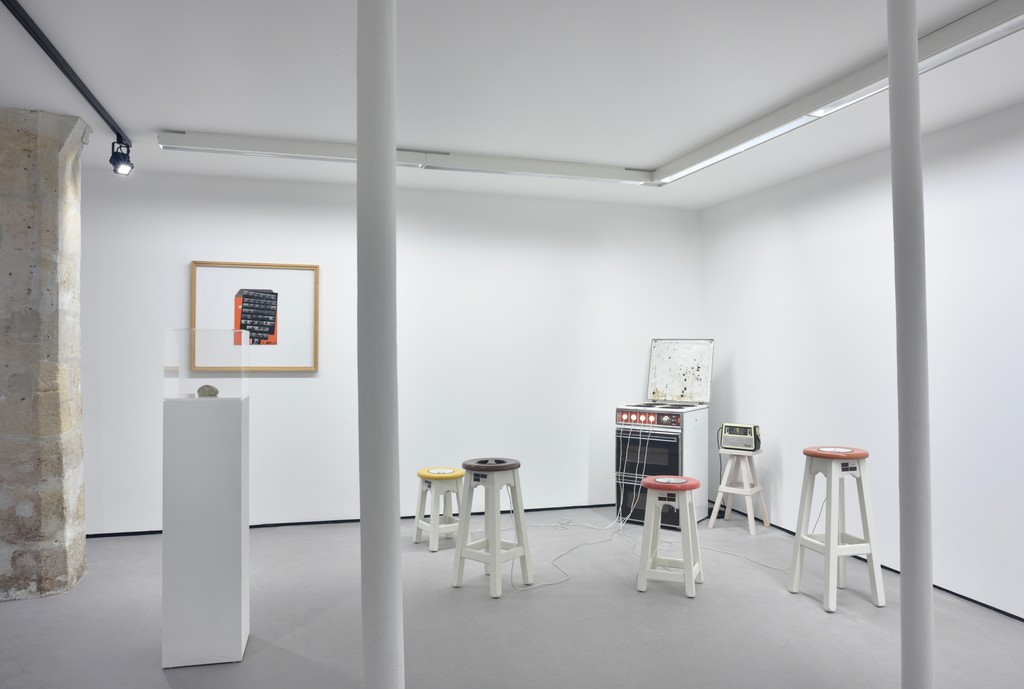 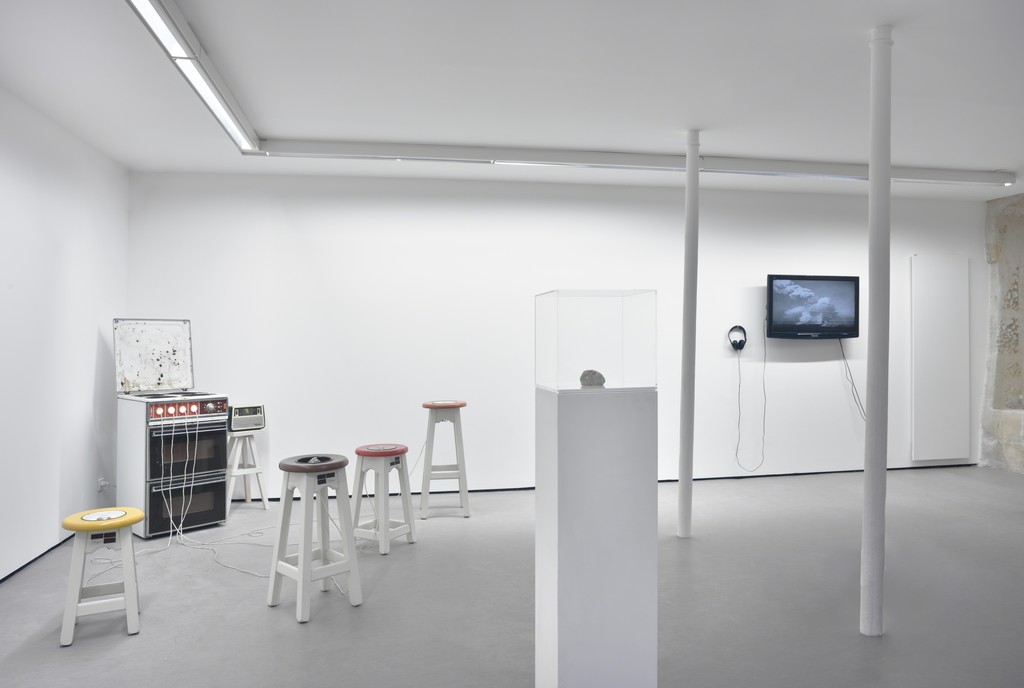 Territories and boarders, may they be physical or mental, have always been one of man’s preoccupation. Two conceptions counteract each other : on one hand continuity and protection, on the other redefinition and emancipation.
It is the latter that is of interest here to Pierre Yves Bohm, Daniel Pommereulle, Véronique Boudier, Franz West, Hélène Delprat, Tetsumi Kudo, Alina Szapocznikow and Sigalit Landau. To push back one’s boundaries in order to conquer a territory beyond one’s limits.
With its almost shamanic essence, Pierre Yves Bohm’s sculpture, reminding us of a fetishist teepee, echoes the ancestral, divine and protective forces : a temptation to recreate a world far from the vicissitudes of life that surround the artist.
Daniel Pommereulle has always worked on the notion of space as a true explorer of territories where none would venture. In this
Brûlure du Ciel, he attacks the surface of the work, two superimposed sheets, one red, the other silver, the burns reveal their superimposition and suggest to go beyond appearances.
Likewise, Véronique Boudier’s Miroirs Éblouis (Blinded Mirrors), play with a similar mental space, a projection substrate in constant transformation.
Mobility is at play in Franz West’s pieces, their very existence is subordinated to someone using them. The interaction between the object and the body challenges the spectator’s visual interest in favor of a tactile discovery, these artworks become «adapters between art and life».
Gone looking for the spot where Pasolini was murdered and where a monument to his memory was built, Hélène Delprat delivers in her film Il Monumento vicino al mare, a Roman break that follows memory lane with bewitching connections between images, writings and sounds.
In Cultivation by nature and people who are looking at it, Tetsumi Kudo anticipates a rebirth of humanity from its own failures. He expresses a new ecology, result of the symbiosis between a polluted nature, the proliferation of new technologies and the reconsideration by men of the «primitive antagonism» that characterizes him.
From ball-point pen drawings to sculpture, Alina Szapocznikow’s practice reveals, not only her thoughts on the human body but also her will to experiment with shapes and materials. The thin lines in her drawings allude to a human body becoming an anthropomorphic, sensual and feminine object. This body, prone to mutability, witnesses time going by, pains scarring it. Her sculpture Tumor evokes frailty and physical deterioration but is mostly the expression of physical and mental resiliency.
Finally, dealing both with intimate and political questions through four interviews, Four Mothers, a piece by Sigalit Landau, tells the life story of four women from Marseille, either immigrant themselves or born from immigration and whose journey sometimes sound heroic.
At a time of human withdrawal, may this exhibition help us see and reflect on the richness of the unknown, of the other.