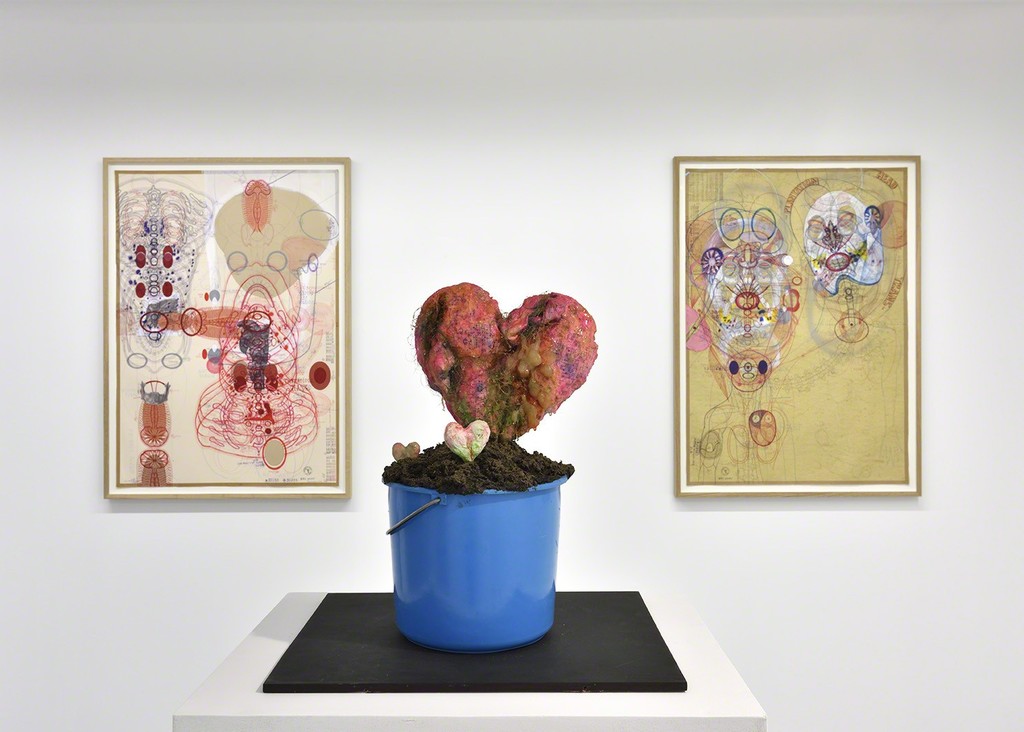 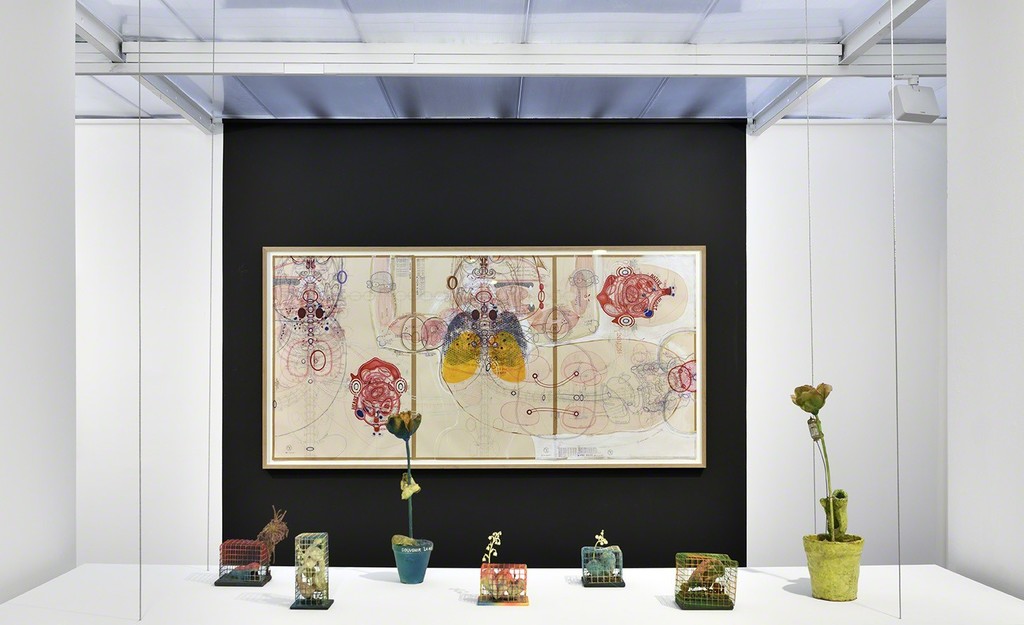 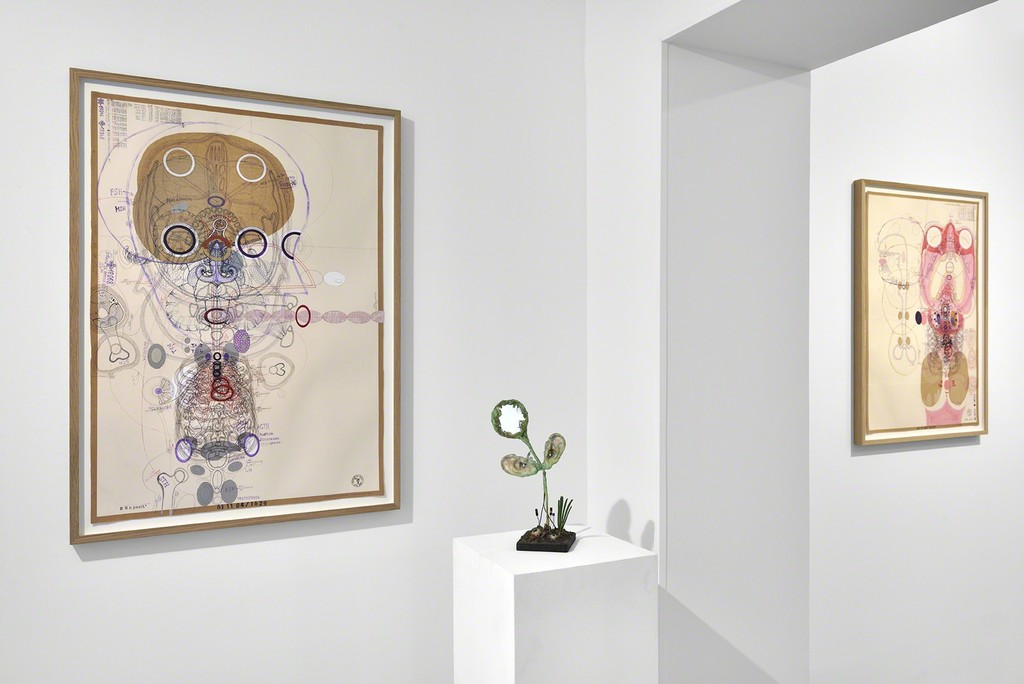 The Galerie Christophe Gaillard is particularly pleased to present Lubos Plny’s work for the first time. On this occasion, the Czech artist’s eleven artworks will be displayed alongside eleven Tetsumi Kudo sculptures (whose first exhibition at the gallery dates back to 2013). The « De humani corporis fabrica » exhibition questions the nature of man and its transcendance.

No doubt, referring to a human anatomy treaty — De humani corporis fabrica was written by anatomist Andreas Vesalius in the second half of the mid 16th century — might seem odd. But on a closer look, one might notice in both of these artists a similar thirst for knowledge, a similar optimism maybe, and for sure a similar fantasy : to heighten man’s abilities beyond the limitations assigned by Nature.

If, during the Renaissance, Leonardo da Vinci (revisiting Vitruvius) inscribed a man in the perfect geometrical shapes that are the square and the circle, and if, as Protagoras claimed « Man is the measure of all things », then, through their use of geometrical shapes, date accumulations and (quasi-kaballistic) spiraling numbers, Lubos Plny’s artworks also inscribe Man in an anatomical cosmogony and express this very harmony between Man and the universe. These drawings, beyond their profound « truth » (Lubos Plny also practiced dissection like many great artists and scientific humanists of the 15th and 16th century) also express a fantasy and might even be a gateway to a truth that only observation of a body and its organs could allow. Lubos Plny rekindles the myth of the artist both poet and scientist and as such it is only natural his work should be associated to Tetsumi Kudo’s. Quoting Leonardo da Vinci : « You who pretend is it better to watch a demonstration in anatomy than to see drawings, you would be right if only it were possible to observe all the details shown in these drawings in a single figure ».

Formally, by encircling in an arachnoid network a skull, a hand or a nose, the Japanese artist’s woolen strings resonate with the complex webs of interweaving lines in the Czech’s drawings. Coincidentally, Plny’s first job was electro-technician, which is quite striking when one knows of Kudo’s fascination for electronics. Furthermore, couldn’t we apply Barbara Safarova’s description of Plny’s drawings to Kudo’s sculptures as well ? « Sometimes, fragmented bodies interlock or graft themselves to one another to form enigmatic and hybrid structures, erasing the boundaries between male and female, between human and animal ».

But beyond these formal similarities it's in the wake of the quarrel between Aristotle and Epicurus that one should consider the relation between the two artists presented here : should the nature of a human being be respected or exceeded ? This exhibition seeks to question the nature of this exceedance induced by knowledge, progress and fantasy. While Lubos Plny’s pushes the idea of the Greeks, who saw in nature a logos and in the cosmos a coherent, intelligible and beautiful whole, to its limits, Kudo’s work addresses dystopia, transhumanism. And it is that very shift in meaning that leads us to question the ambivalence of the catch-all term of « transhumanism », the widely spread confusion between « being a human » (belonging to a species) and « being human » (a way of thinking that highlights man's moral qualities : ethics, rationality, altruism). The term « transhumanism » carries within itself this fundamental misinterpretation. As Mike Kelley wrote in his essay « Cultivation by Radiation » on Tetsumi Kudo « the body parts are specifically sensory organs and moreover that have been locked up and exposed. These post-nuclear representations of the new Man show impotent mutations, cut out from both body and nature. They are the result of scientific transgressions and their survival depends on prosthetic technology ».

The manufacturing of the body Vesalius alluded to refers to both the fabrication and the result. The human body is the result of a fabrication by nature that acts with will and intention. But with Plny and Kudo, the human body is no longer the sole work of a wise craftsman called God, Creator or Nature, but really that of Man himself. Each of us could or will become the craftsman of an augmented, hybrid nature.

To introduce his book, Vesalius offered an illustration of a female corpse, at the very moment the anatomist, turning his eyes to us, points to the uterus with one hand and to a skeleton with the other, thus celebrating the victory of life over death. This is the ontological triple question the work of Plny and Kudo raises : Who are we ? Who do we want to be ? And who will we be ?