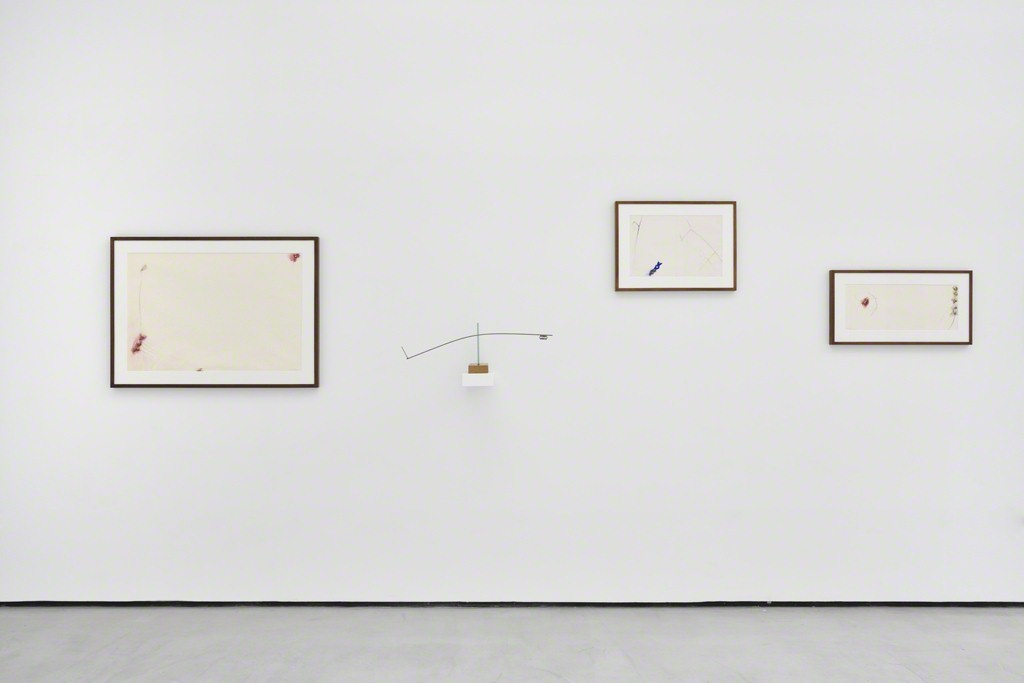 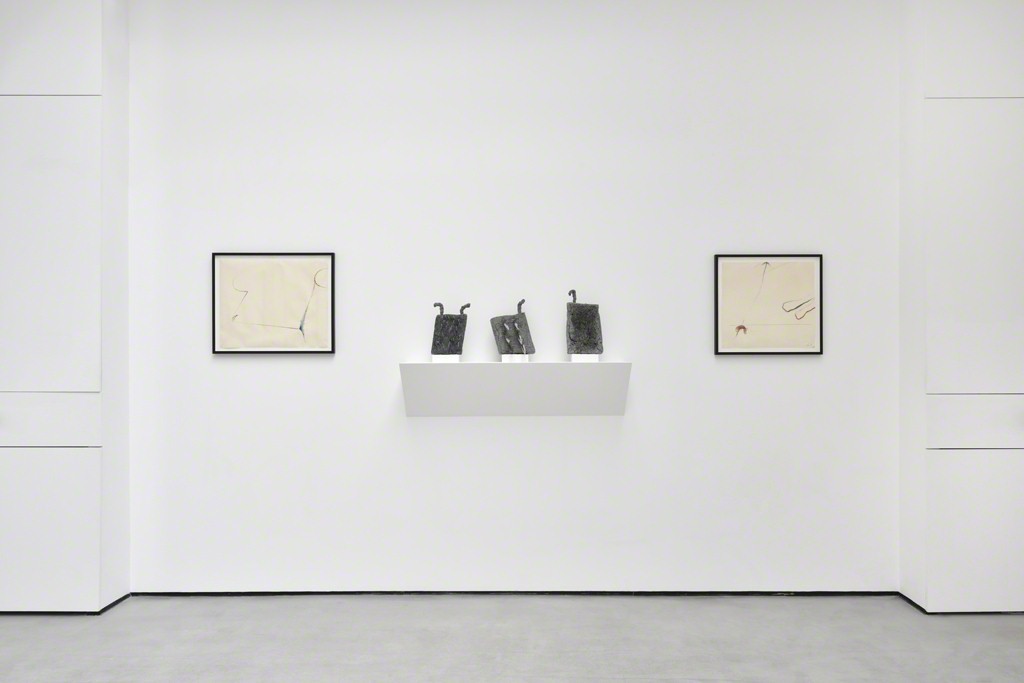 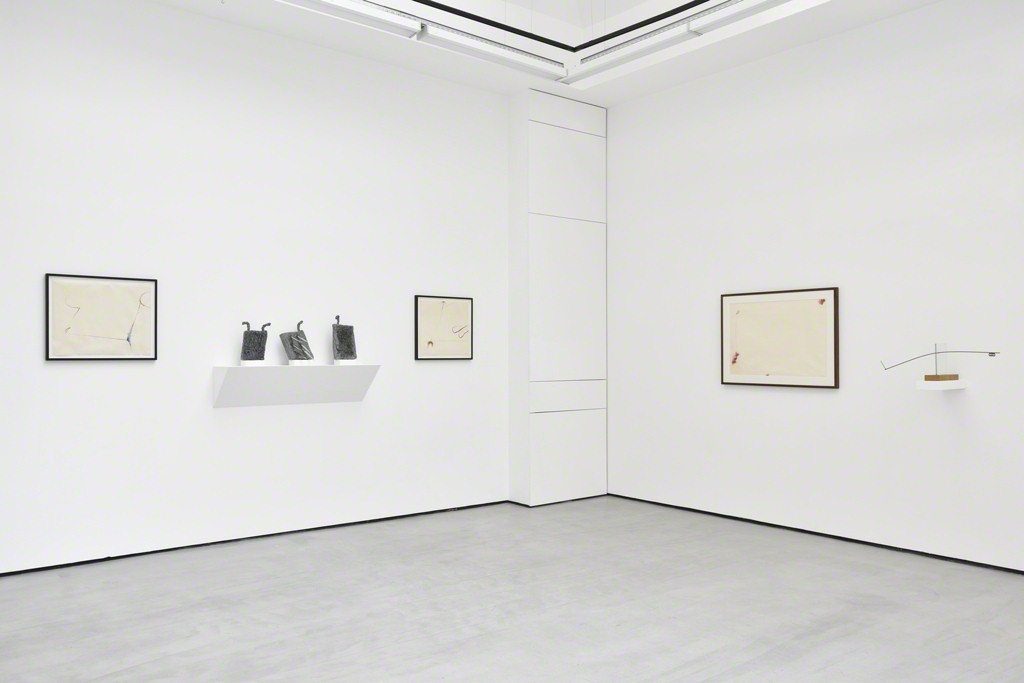 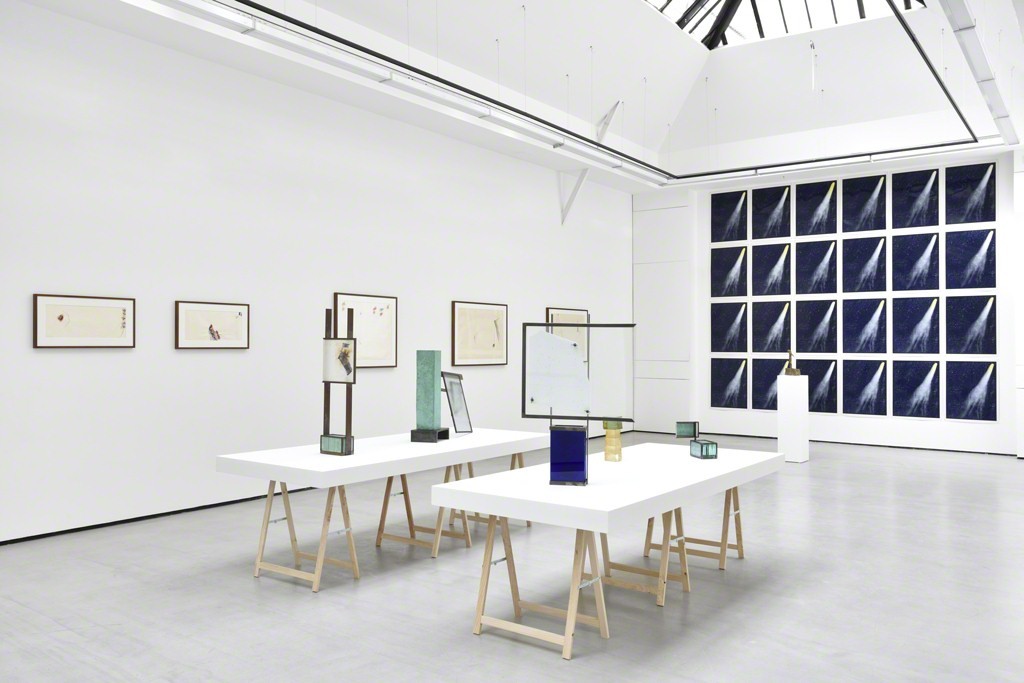 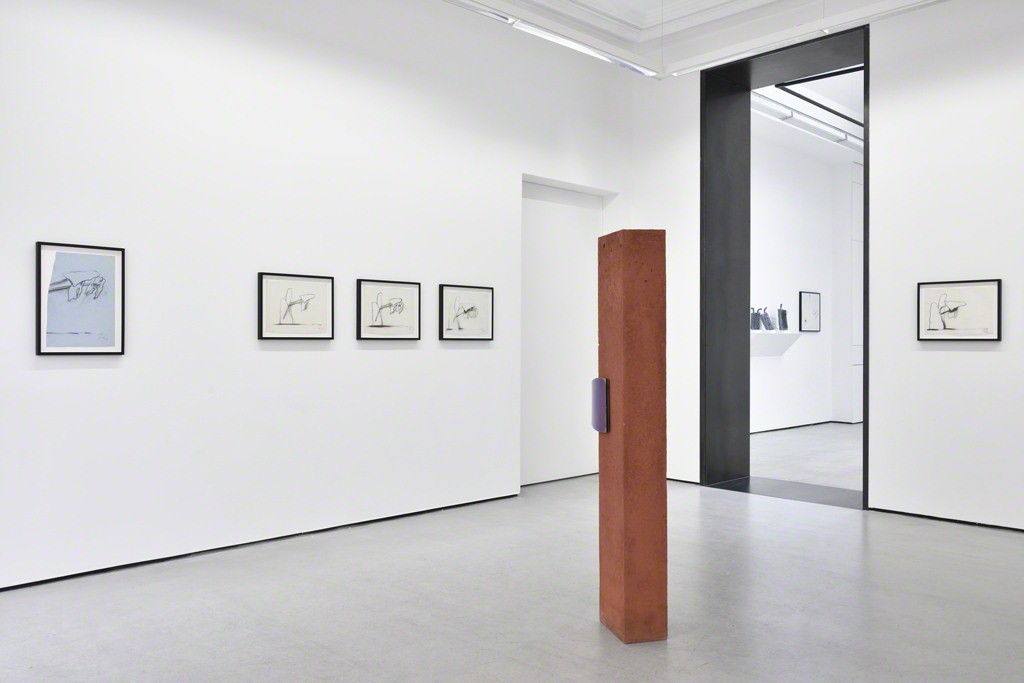 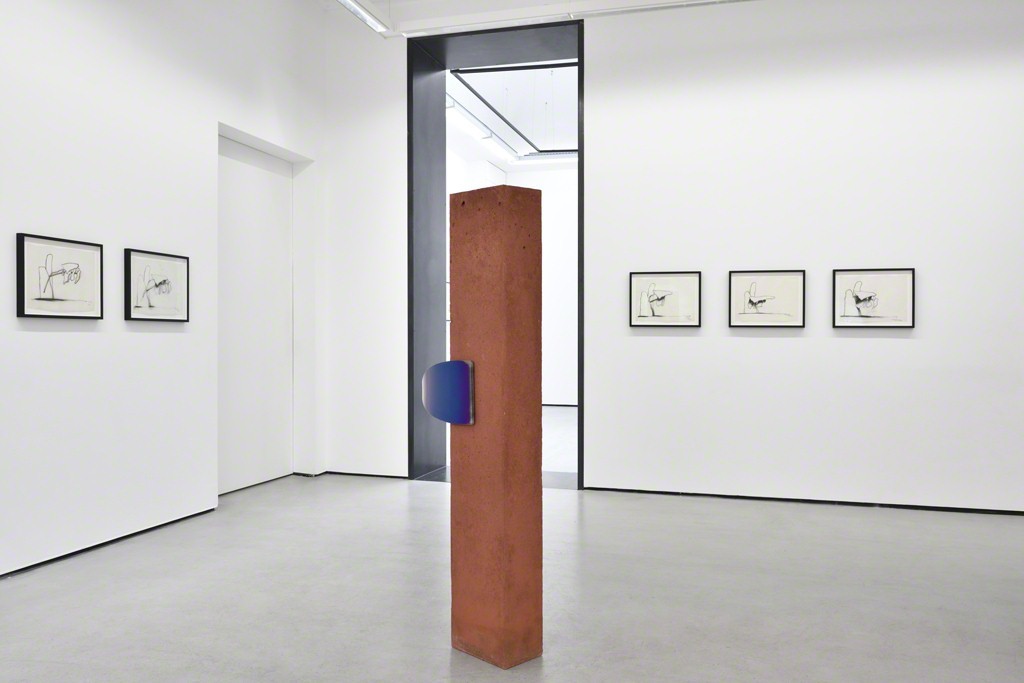 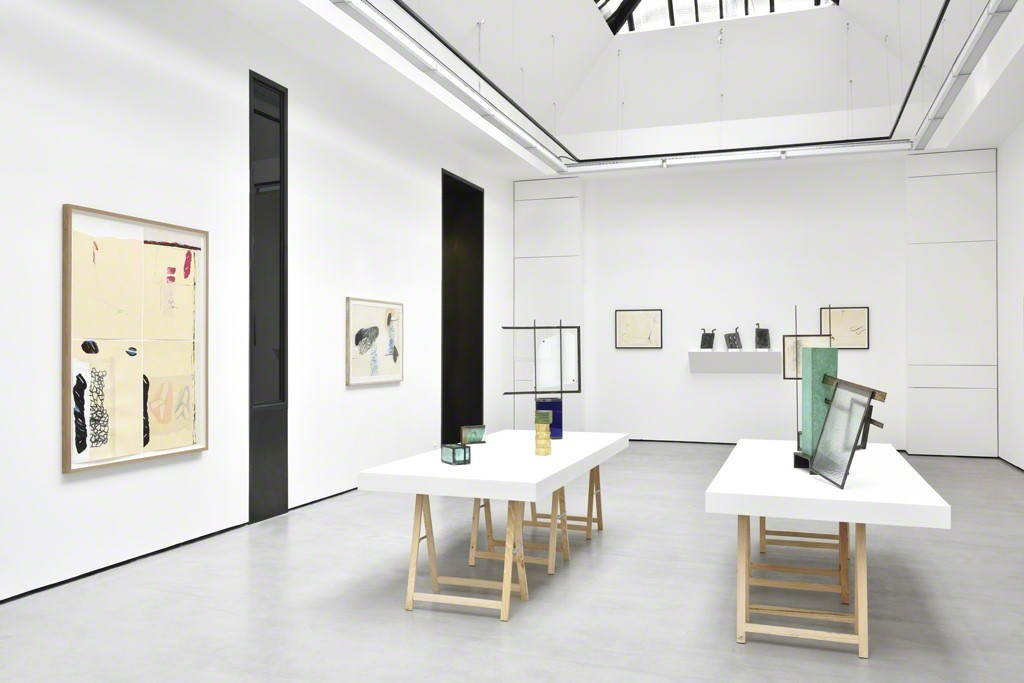 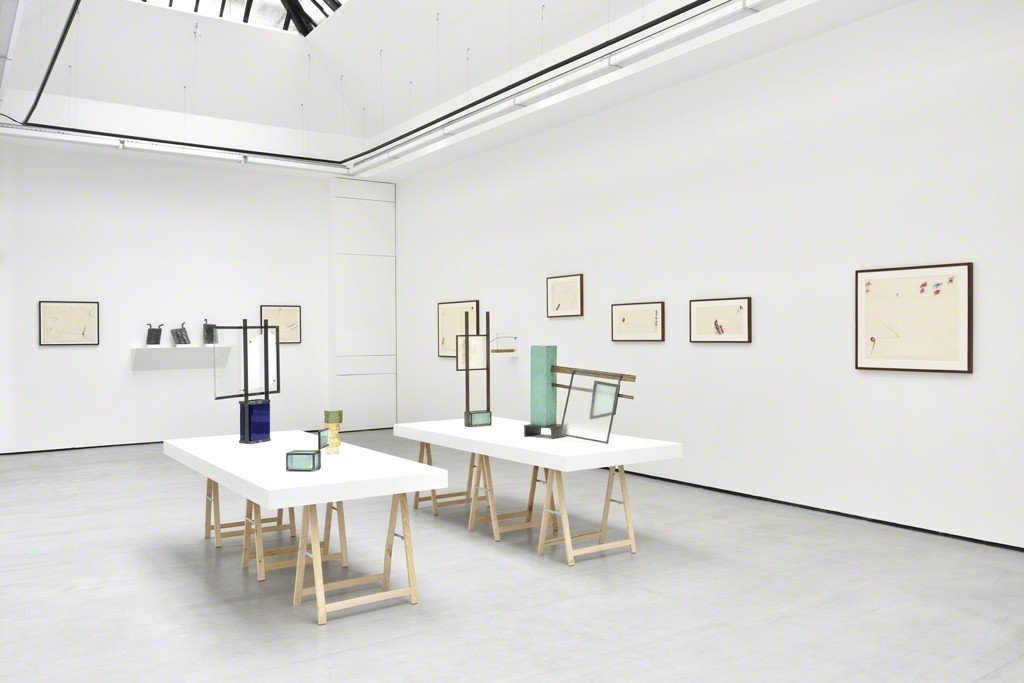 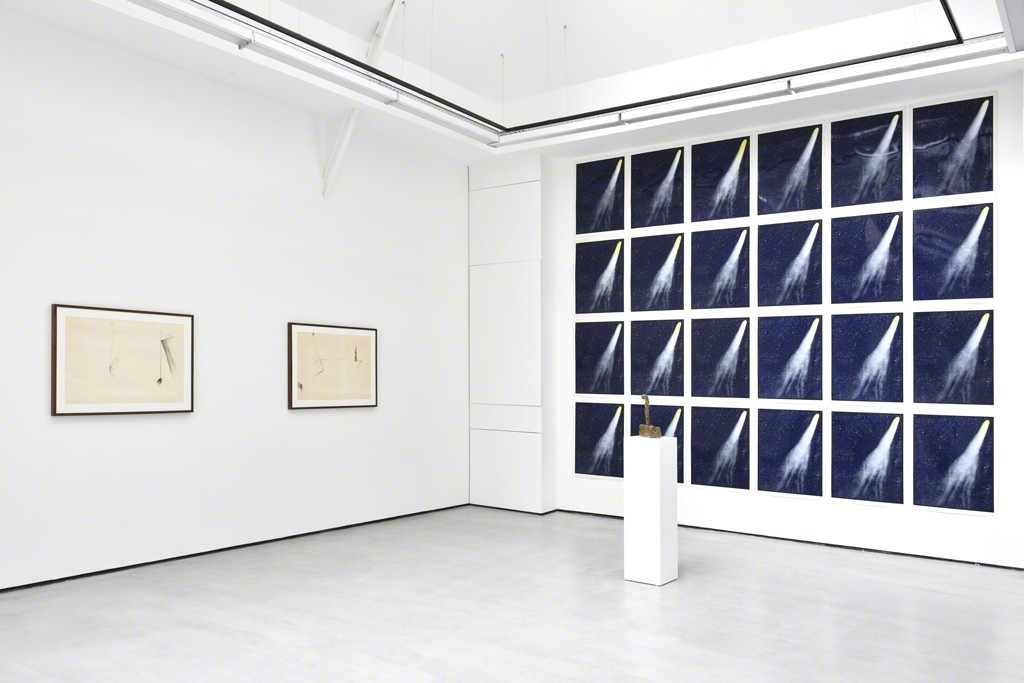 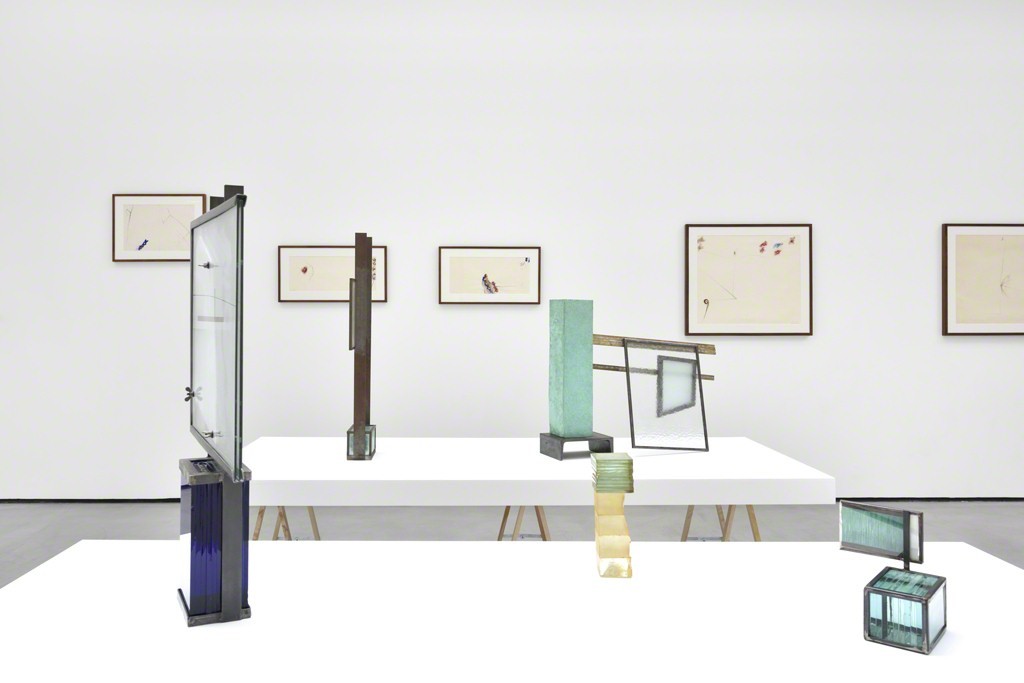 « Drawing is the basis of everything »
Alberto Giacometti

« A desire to find a solution between things full and calm and sharp and violent »
Alberto Giacometti, Letters to Pierre Matisse, 1947

Daniel Pommereulle (1937 - 2003) crossed the 20th century like lightening. Known today for his blade sculptures, he has been, often simultaneously, a painter, a performer, a filmmaker, an actor, a sculptor, a poet and a sketch artist. A mythical figure of the 1960’s Saint-Germain des Prés, he mingled very early on with the main protagonists of the european artistic scene. With Alain Jouffroy and Jean-Jacques Lebel, he meets with the Surrealists André Breton, Max Ernst or Roberto Matta. With Erro, he leaves at age 24 for Italy and takes part in « L’Anti-Procès » (The Anti-Trial) in Milan, a radical manifestation organized in reaction to the Algerian War, from which he has just returned. Very active during May 68, he creates with painter Olivier Mosset and film directors Serge Bard, Jackie Raynal and Philippe Garrel the production group Zanzibar, in the total freedom of the May Spirit, greatly affected by Jean-Luc Godard, with whom he collaborated in 1967 on the film Weekend . That same year, La Collectionneuse (The Collector), that Pommereulle co-wrote with Eric Rohmer, is released. He is seen manipulating the famous little empty yellow paint pot striped with razor blades - Objet hors-saisie (Object out of reach) currently on display in the Centre Pompidou’s permanent collection exhibit.

This first occurence of blades in his work foretells the great Objets de prémonition (Premonition Objects) series (1973 - 1975), dangerous objects, potential weapons made by an artist who confronts and provokes the spectator to challenge the smothering boredom of the de Gaulle era. In the 1980’s, the sculptures shaped in atomic or industrial glass keep the liveliness and violence of the knives. This cruelty embodies the « sign », the « brand » of Daniel Pommereulle. It has forever fascinated those that have admired or commented on his work. « Cruelty, his great friend and supporter Alain Jouffroy reminds us, isn’t only the act of torture, (…) but also the most extreme form of thought »1.

Drawing is probably the most forward expression of thought. The immediate and simple transposition of thought on paper, its extension. It is always through drawing that Pommereulle invents new forms. Like the utopian architects of the 19th century, he imagines plans for persecution apparatuses which mainly remain in their mental state (except for Toboggan (1974) which was recently presented at the Palais de Tokyo) and conceives monumental machineries. A new vocabulary, a new grammar of forms emerges from the paper, which he works on as much as they work on him. They can be found in the entire body of painted, sculpted and filmed work. Hundreds of sketches bring forth the sculptor’s future ideas. All of the sketches in notebooks or on tracing paper, restaurant napkins, paper tablecloth or menus, in pencil or ink kept in the archives, bring a diligent and daily work to light, sometimes even obsessional when it comes to specific shapes that will eventually spring up later on in the Passants Luisants (Glistening figures) drawings or materialize in sculptures. To glance at Pommereulle’s drawings is to enter his thought laboratory. These « signs that bite2 » are not exempt of gracefulness and softness.

After exhibiting in 2016 a selection of early inks and paintings, based on the period of « experiences » specific to the 1960’s3, the Galerie Christophe Gaillard offers with this exhibition in its main space a new perspective on Daniel Pommereulle’s work. The wide display of drawings, in dialogue with a precise selection of sculptures, allows us to confront well-known artworks with others that had yet never been seen outside the studio and embrace a 30 years long carrier. While the sculptures keep us at bay and even at a distance, the drawings invite us closer in the intimacy of the sheet of paper : a subtle motion in our visual adjustment that allows us to come closer to the trajectory and certainly the heart of this major artist’s work.

In the first room, drawings from a 1983 series are displayed, a spectacular project showcasing forms that have apparently never been sculpted. Drawing shows its full potential here. As an initial projection surface, it will materialize - or not - into bronze, marble or glass. Drawing most probably isn’t an attempt to capture reality or transcribe the truth of a perceived object. Nothing seems to be drawn « from life ». He hardly ever paints or draws figures. His drawing is mental. When it isn’t about an object, the form remains abstract — though sensitive and physical. He creates and makes tangible images that arouse our imagination and senses.

Following the lead of the Surrealists he mingles with, Daniel Pommereulle builds a series of fascinating Objects with strong psychic resonance, lead or bronze
sculptures, pots or wood with blades, knives, razors or scalpels he calls Objets de Prémonition (Premonition Objects). The second exhibition space confronts us to strange and visionary totems that draw their inspiration from an extra-occidental art, though we couldn’t say wether it is African or Indian. These Objects attract us as much as they terrify us, they sharpen our desire to see and touch. Their strength lies in the tension, the threat of imminent violence and danger they represent, but also in the sadistic pleasure of the foreseen pain of the « blade to the eye » rather than in the act of injury or destruction itself.

From the blade sculptures, we move on to the later Passants Luisants (Glistening Figures) (1984 - 1986) and Flüchtig (1998 - 2001) drawing series. Like openings in the air of the paper, the rubber strokes have replaced the sparkling knife blades. Crystals, slits, glowing edges, the refinement of an orange, or the sensuality of a purple in the pastels resonate with the colored glass sculptures. In the 1980’s, Daniel Pommereulle leaves for Korea and Japan where he lives and works for a while. He forges a new and modern type of sculpture that we could almost qualify as a « landscape ». In marble and glass, an uncommon material for a sculptor, the body of sculptures presented at FIAC in 1985 won’t go unnoticed. Crack, resistance, break, transparency, brightness, smoothness, fragility : Pommereulle uses all the powers of matter to bring together sharpness and softness, calm and vertigo. His drawing evolves, it finds balance, musicality, this « sky-air clearness » he mentions regarding Marcel Duchamp.

Putting into perspective the sculptures of the 1970’s to 2000’s as well as the later drawings with their fleeting and starry outline — one could also take into account the evolution of the entire drawing production — the incredible coherence of a lifetime research always on the lookout becomes obvious. « Thus striped, Jean-Christophe Bailly writes, space becomes dilated : marked by a network of signs that are like secret veins. One could see it as the recapitulation of a work, an art memory that condenses itself into its idea, as the omen of a reached horizon4 ».

At the end of a 1973 notebook, Daniel Pommereulle who was about 30 years old, and very much aware of his ability to embrace the century with an exceptional energy and freedom wrote : « I cross over, and we stay behind… » A straightforward injunction to contemplate, today, his work of tremendous relevance.