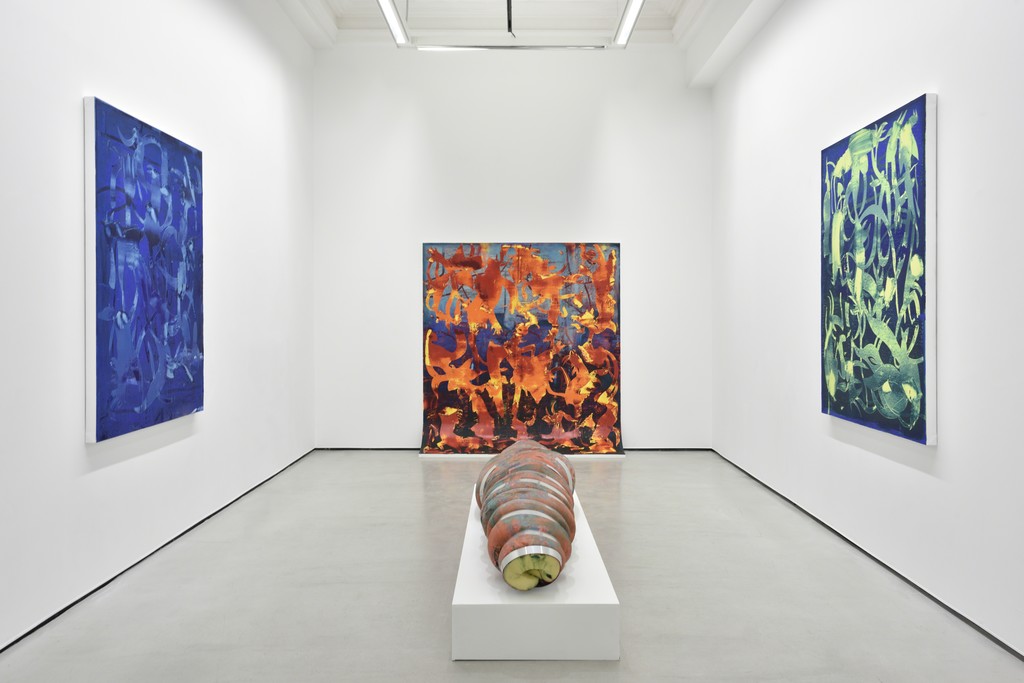 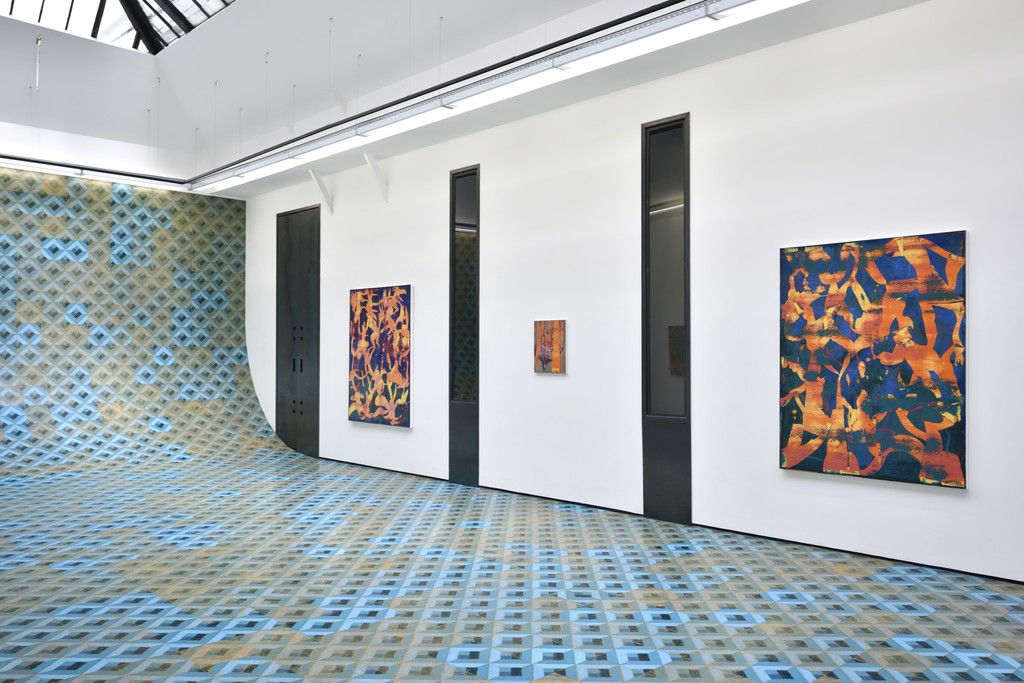 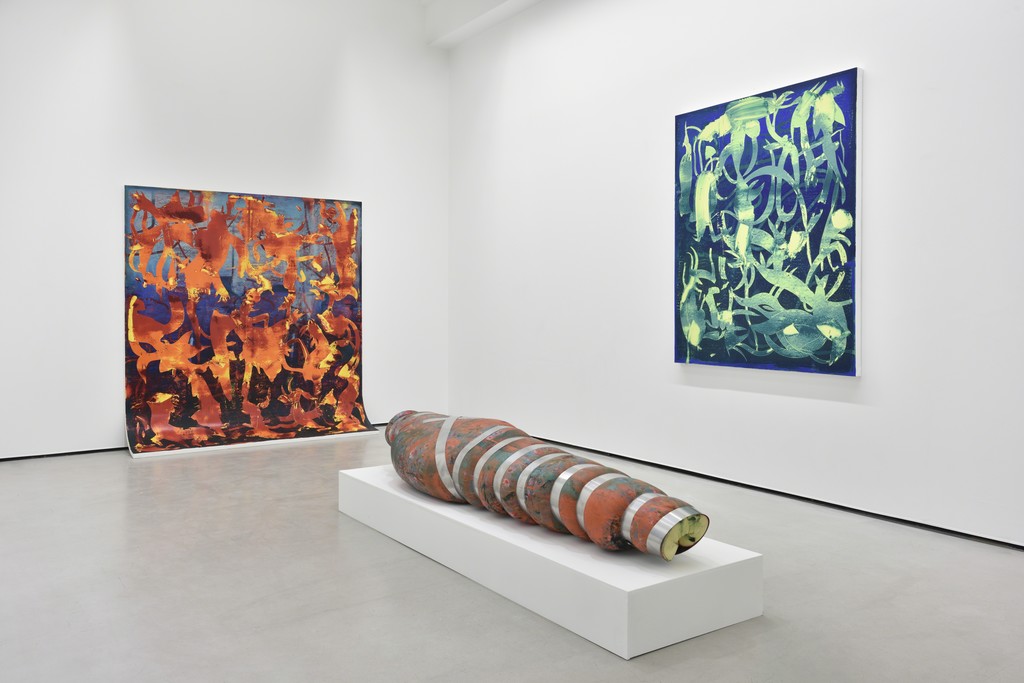 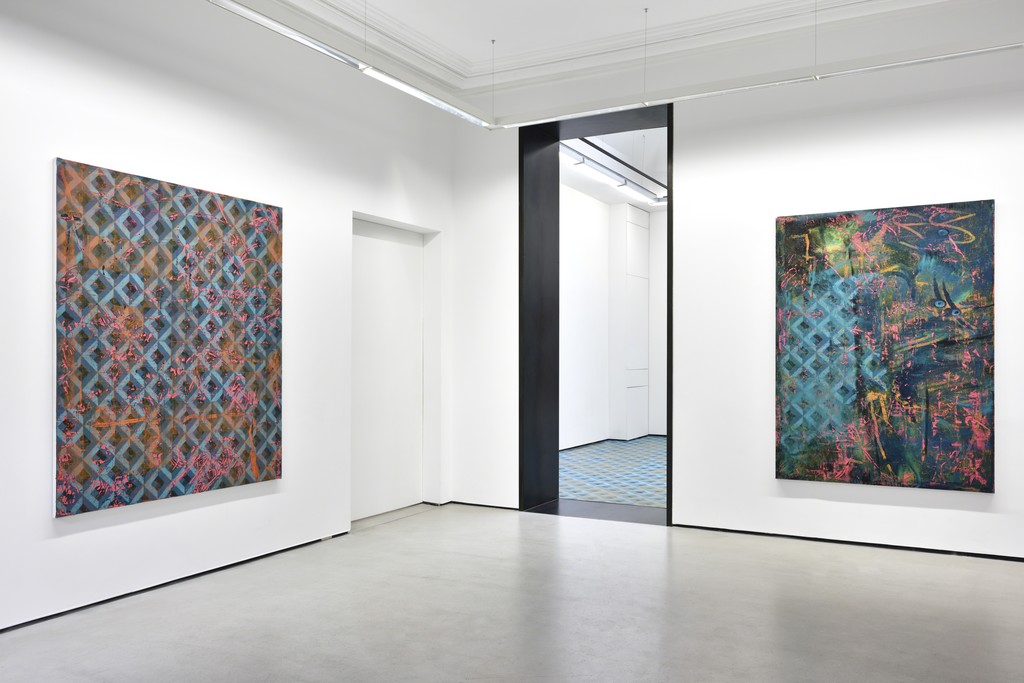 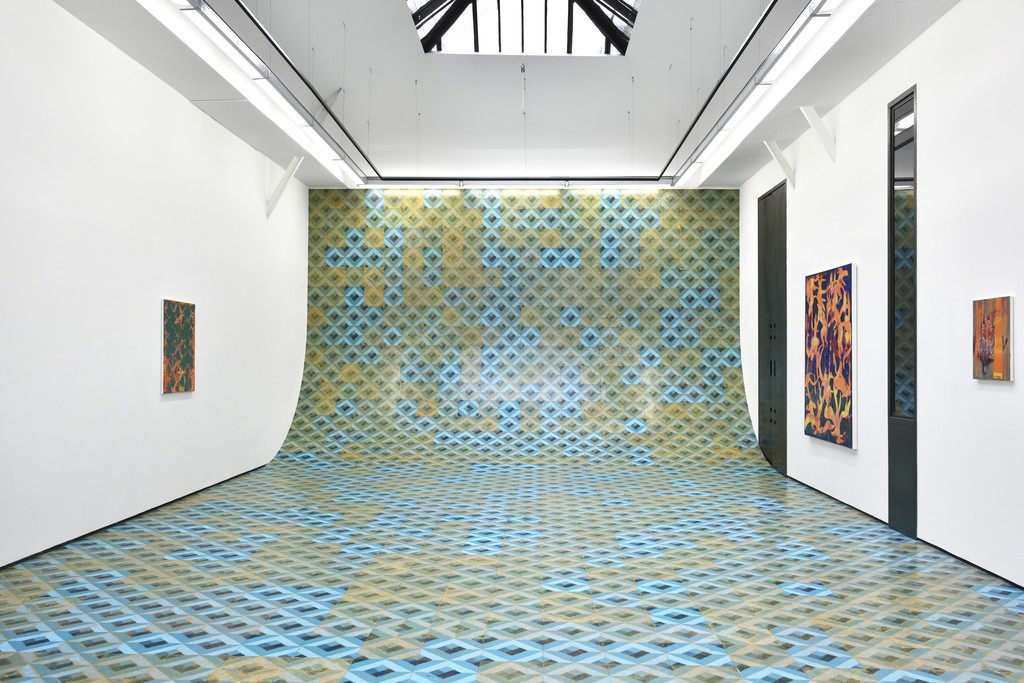 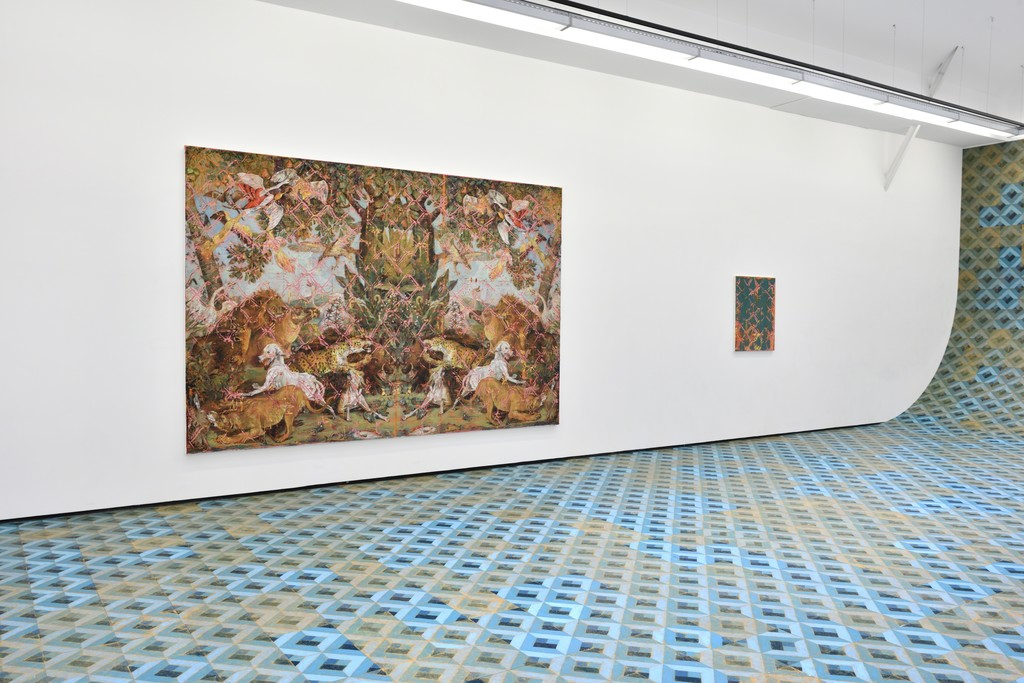 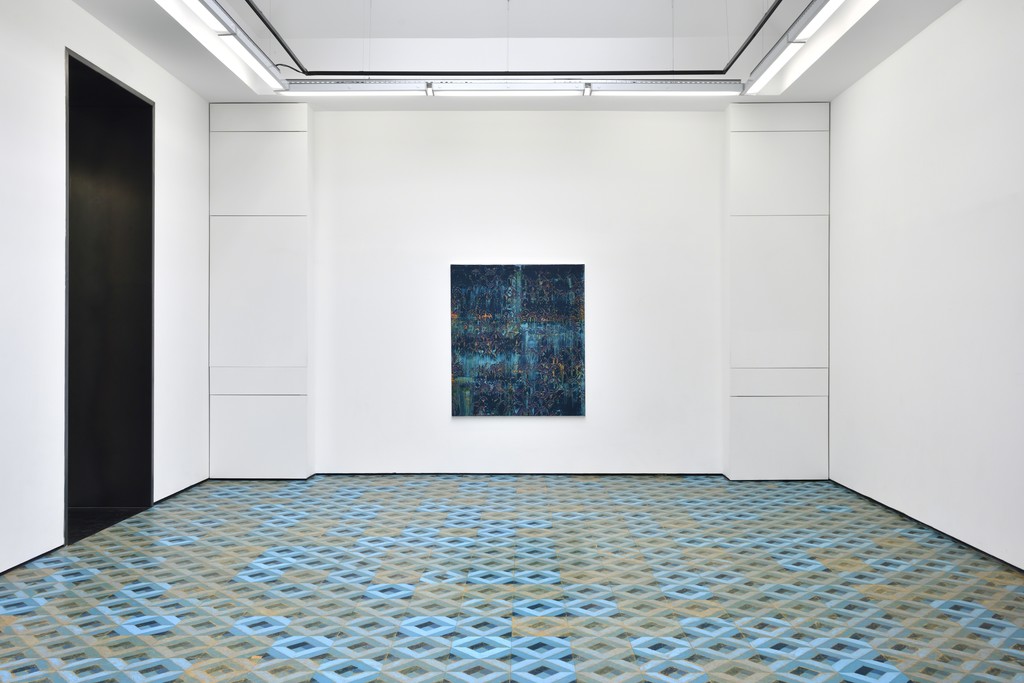 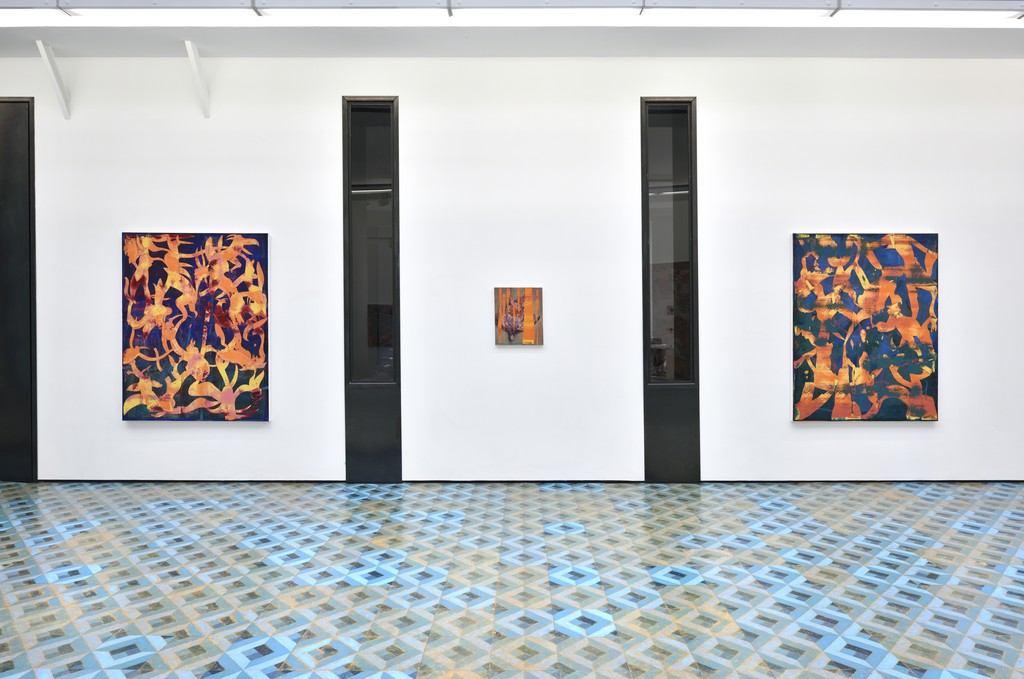 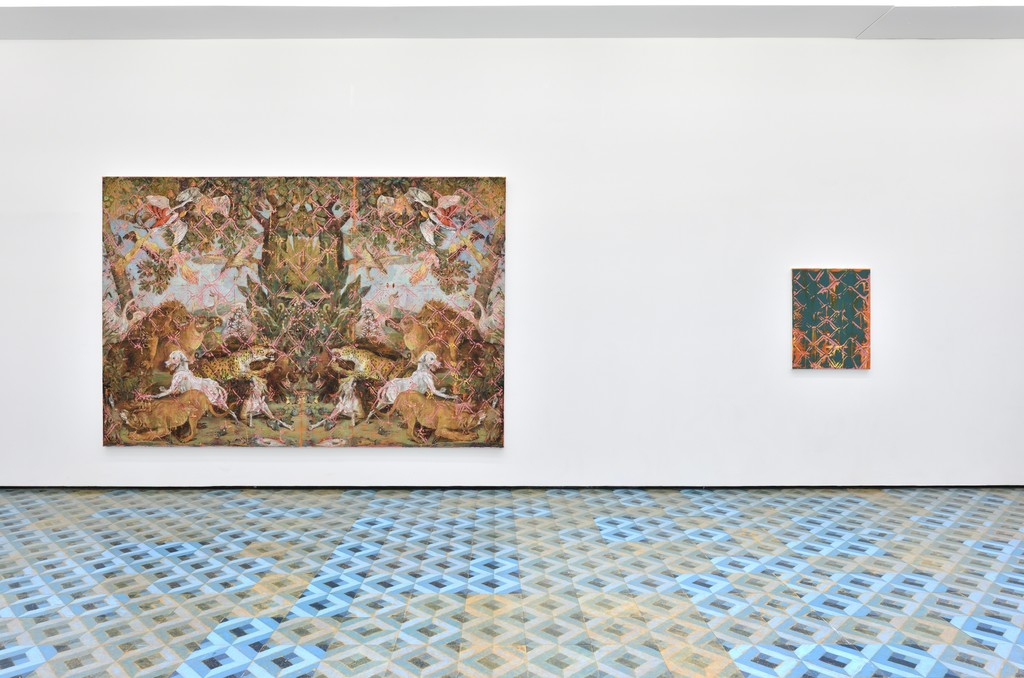 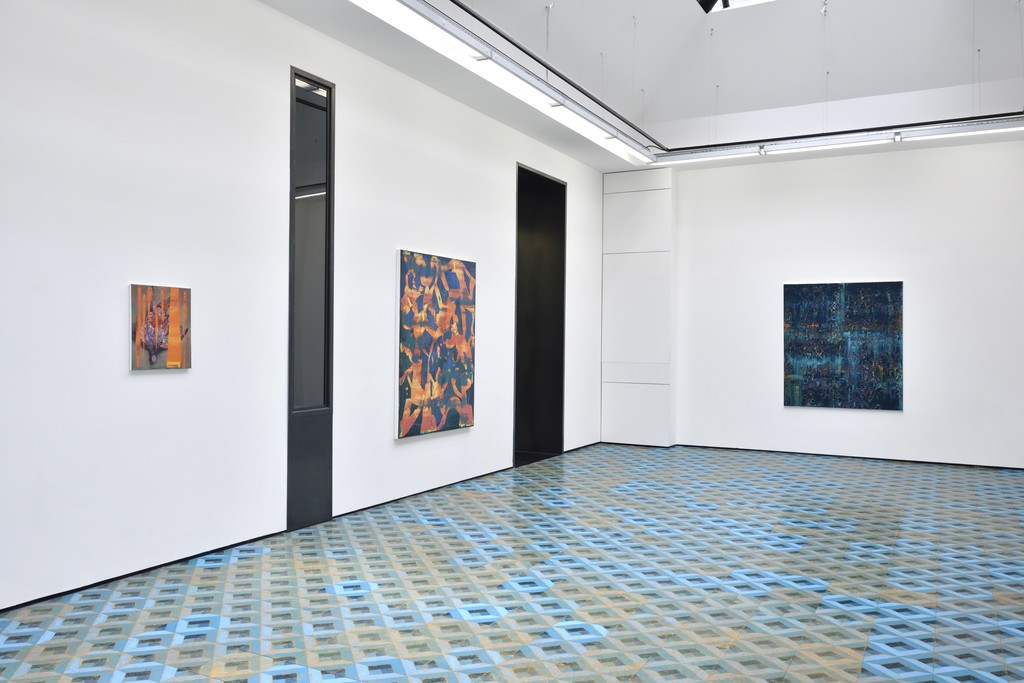 « I’ve always favored a hovering position when it comes to Painting. With this specific point of view, it becomes possible to contemplate Art History without temporality, outside of any set location. All that remains is a long and vertiginous line of descent between artists of the world. This is how I see the world. There is no difference between cave paintings, antic ornements, genre or abstract paintings. It is only a matter of signs, languages outside of language.

Though it is true that any thought requires its own geography to exist, mine has always followed two axes : the floor and the wall. I’ve painted carpets that were meant to be hung, wooden floors that couldn’t be walked upon, paintings with wallpaper inspired patterns that I created on my studio floor. A canvas is a territory, but Painting must seem to want to escape from it, to be autonomous in Life. I’ve conceived this exhibition as an attempt to embrace Painting in its whole by creating surfaces whose pictorial signs belong to no specific place or time, like a memory of the future in a sense.

The canvases share a secret bond between them. To allow the spectators to share that secret, I meant for them to hover over the painting like I do. I therefore worked on a central piece, a painting covering the entire gallery floor. The idea being to inhabit the artwork, to move on it, to trample it, to bring the Painting where it usually isn’t or not anymore. Painting isn’t sacred, it has never been, it’s only a surface that escapes the canvas and overflows into Life. I encourage the public to inhabit this surface physically, to look at the Painting and walk on it. To move from the floor to the wall you need to change paradigm, to change paradigm, you need to know how to fly, to fly, you need a launching pad. »

A monograph will be published in September featuring an interview with Alain Berland and an essay by Frédéric Valabrègues.
Born in 1983, Julien des Monstiers lives and works between Paris and Faye la Vineuse. He graduated from Ecole Nationale Supérieure des Beaux-Arts de Paris in 2008, received the Marin award in 2015, and the Yishu8 and Mécènes du Sud awards in 2017.
Along with the exhibition at the gallery, Julien des Monstiers’ work will be exhibited at Centre d’art d’Arcueil and at QuattroCento, Paris. In December the art center ‘13, rue des Balances’ in Montpellier, will present the ‘Antigone’ project created with French artist Ken Sortais.