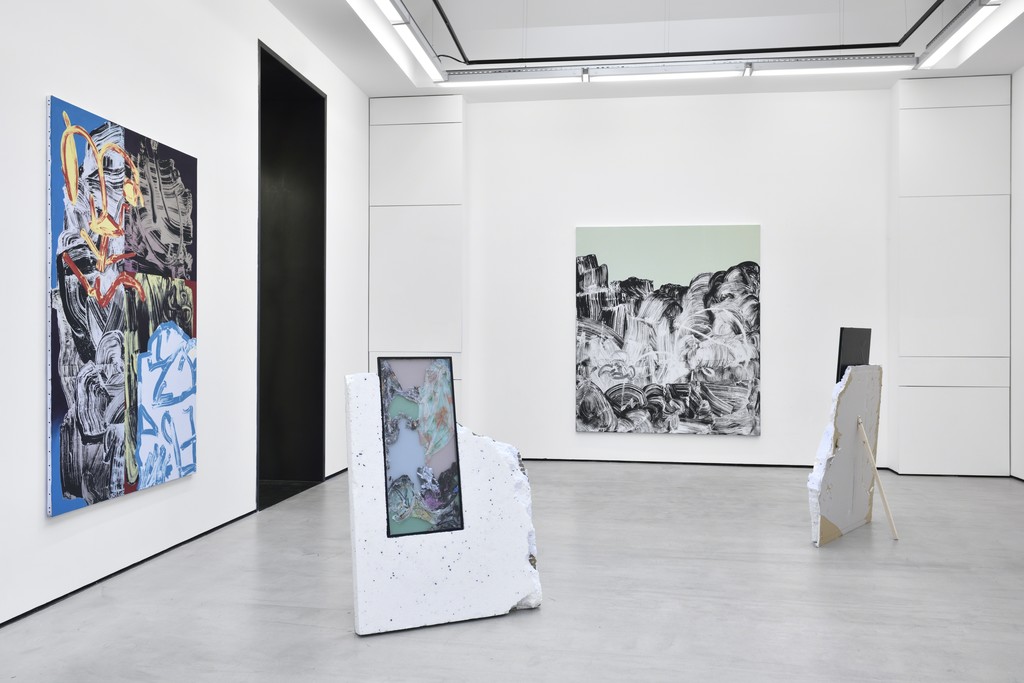 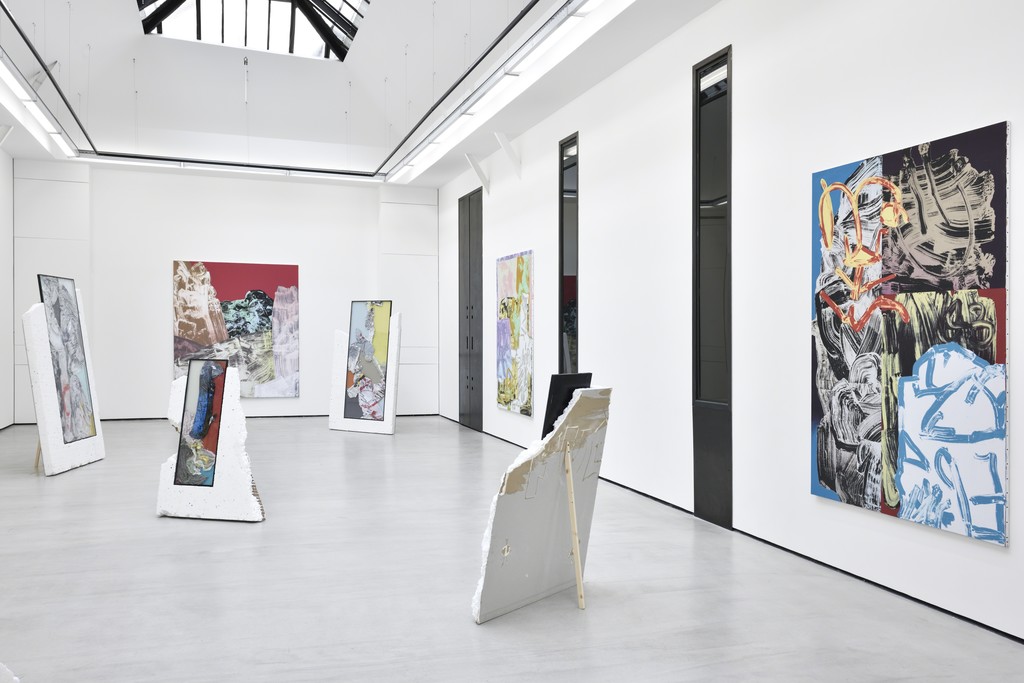 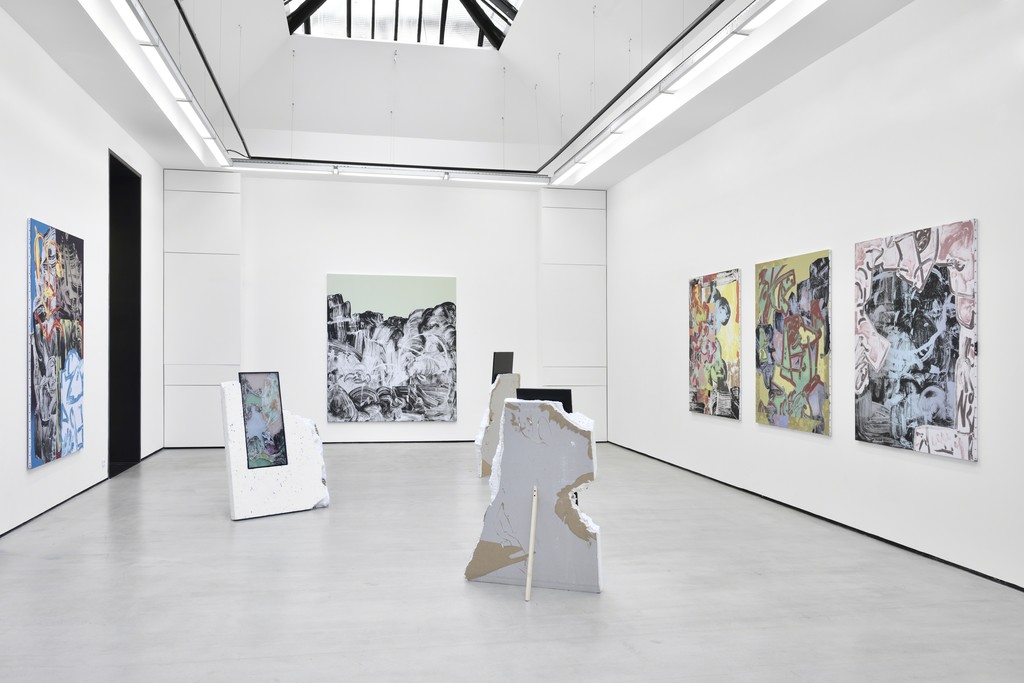 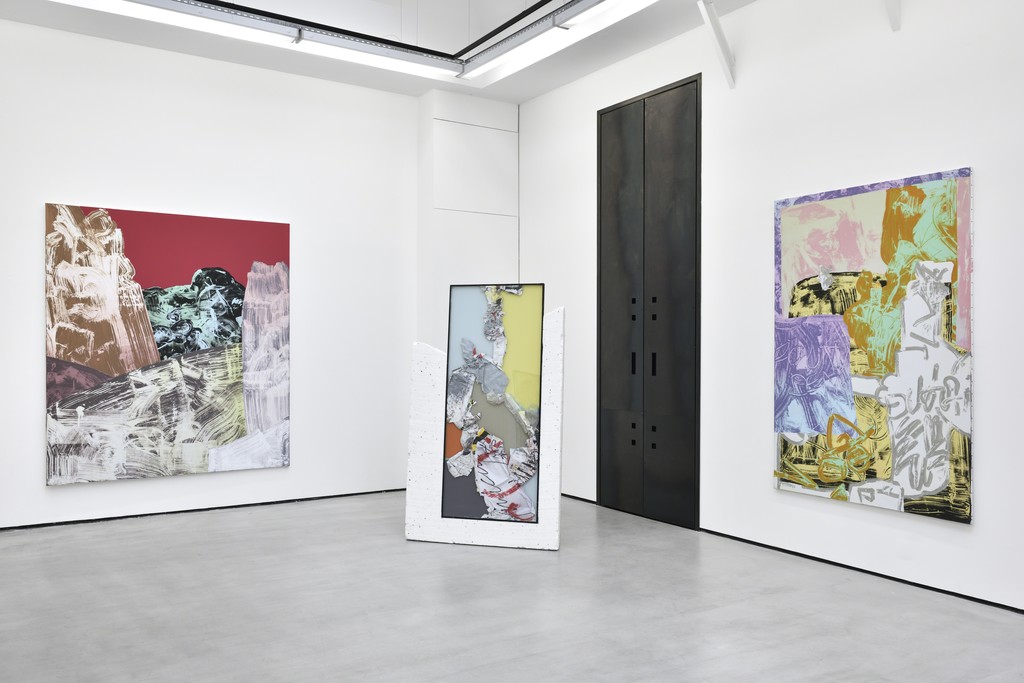 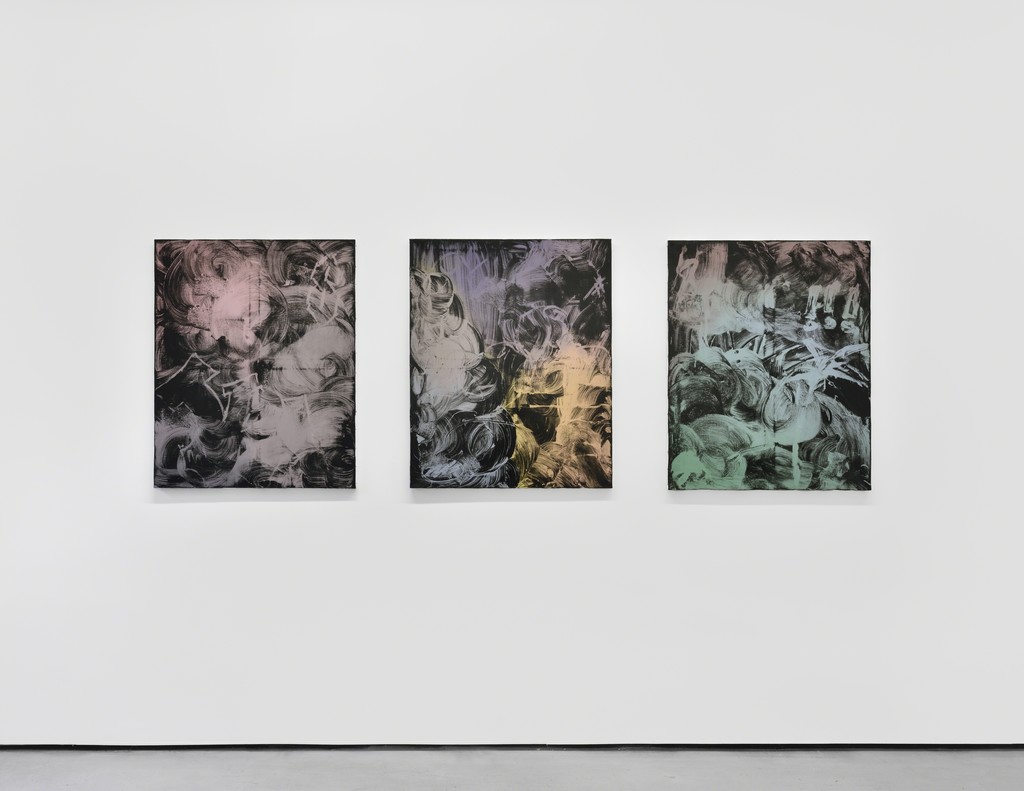 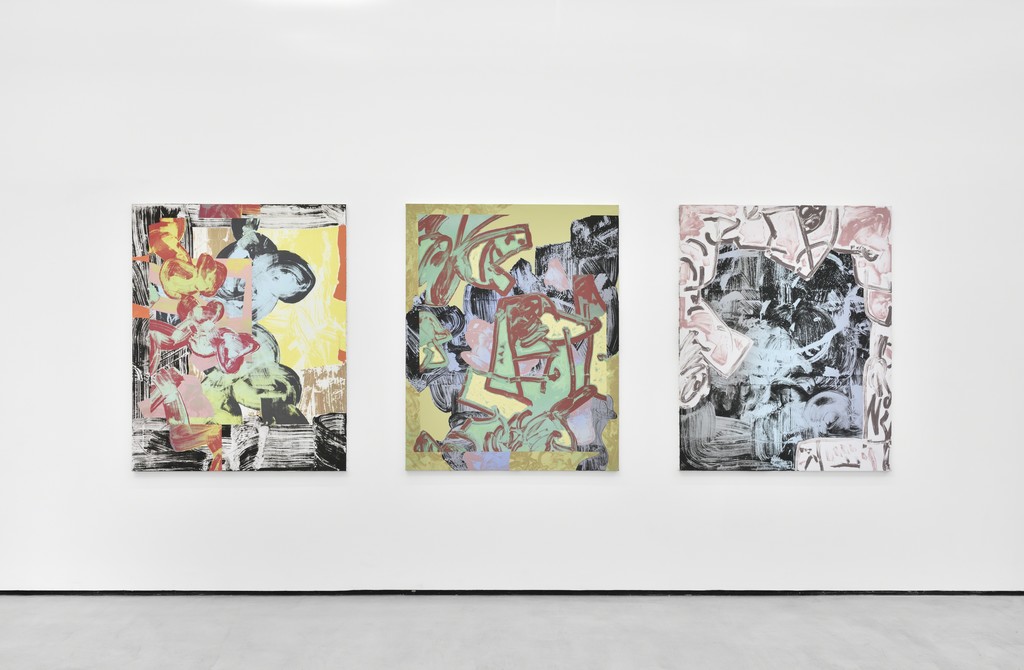 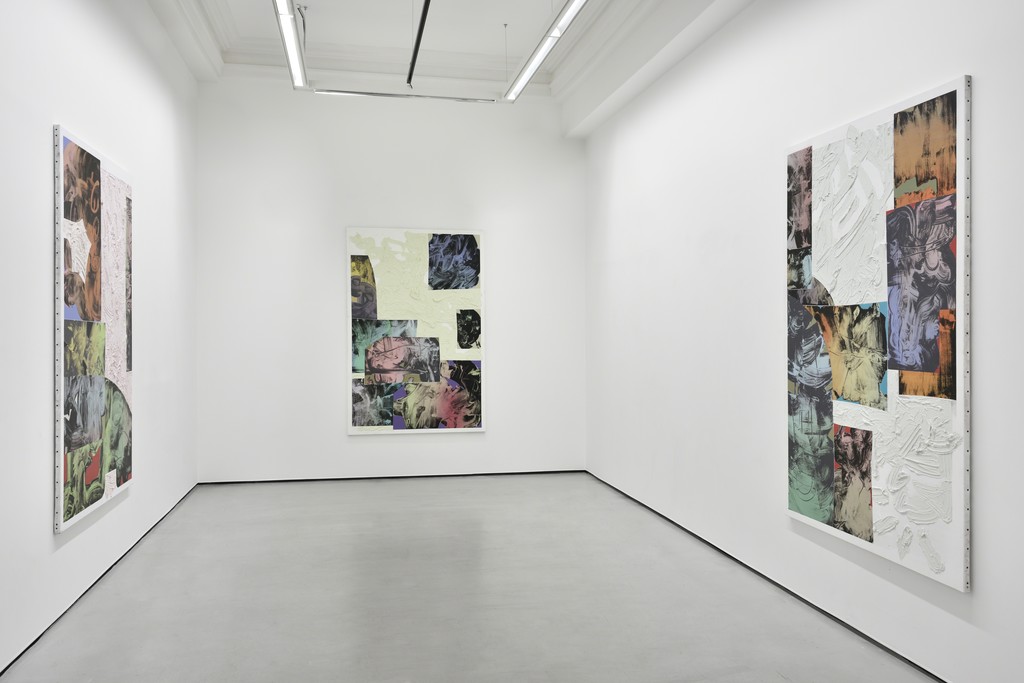 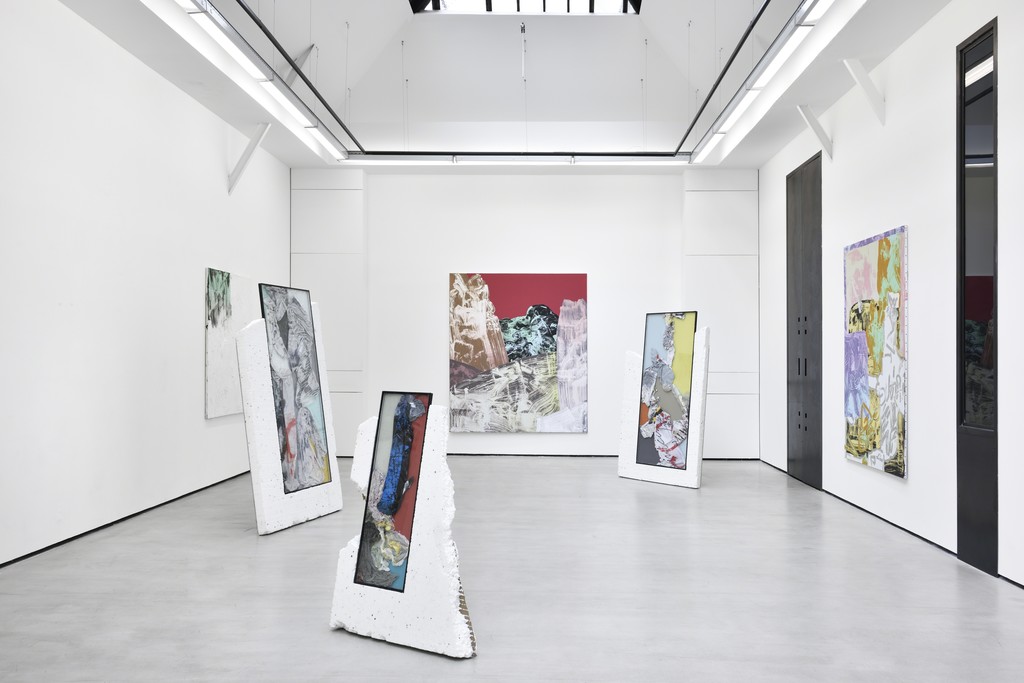 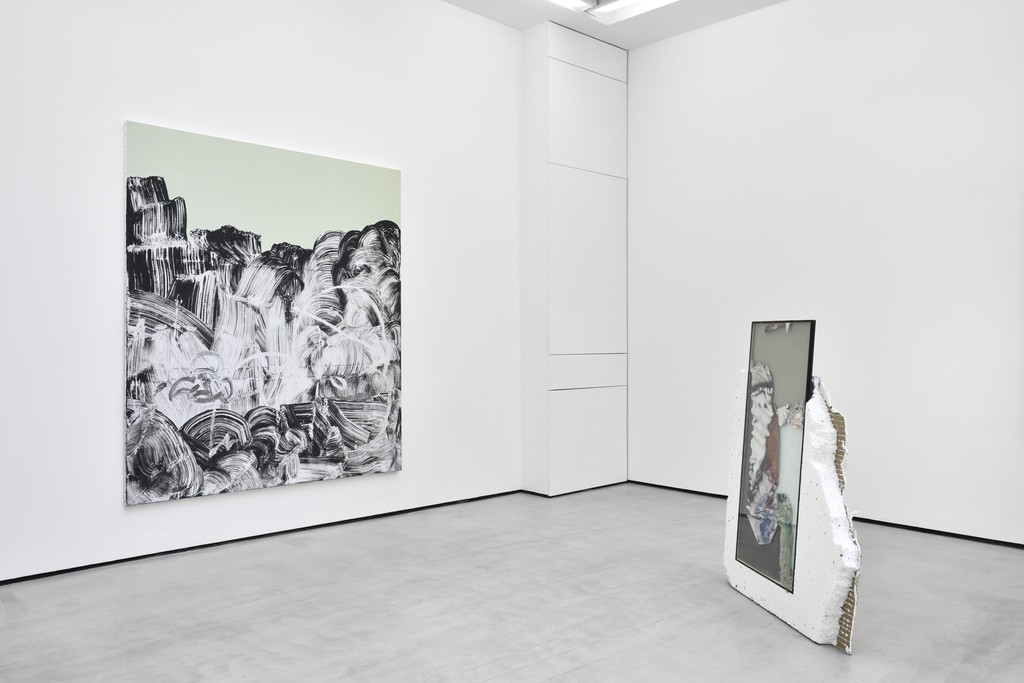 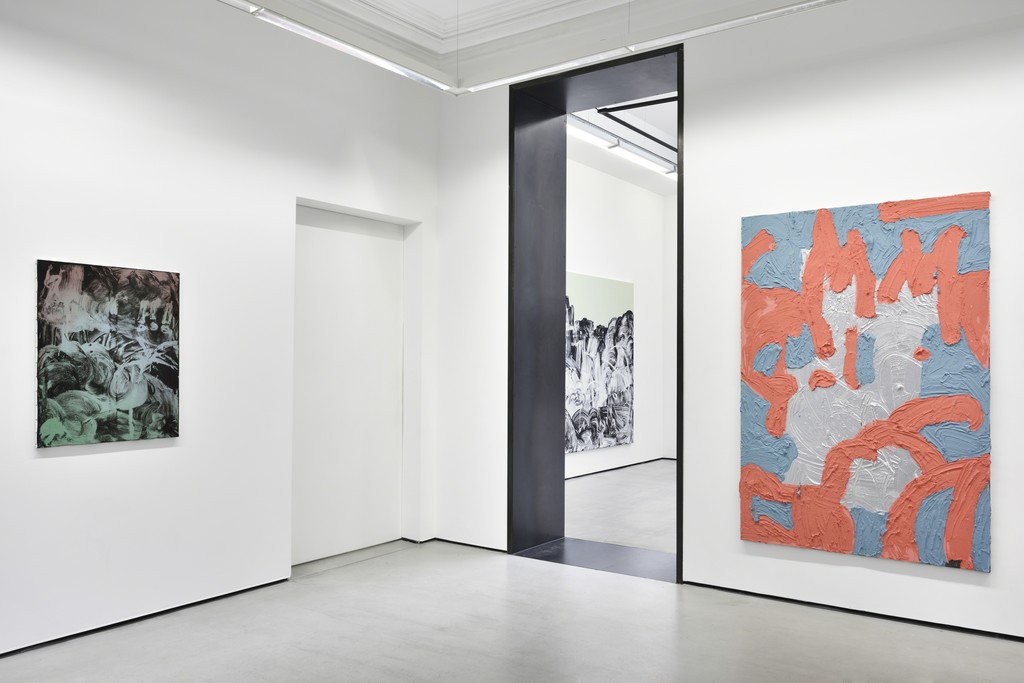 Marcel Duchamp had let dust settle on his « Large Glass » for months, when Man Ray photographed it in his New York studio and entitled it « Dust Breeding » in 1920. This black and white landscape of a wasteland look-alike seen from above reminds us that dust, dirt and outskirts often disturb and unleash creation. What if art was just junk, an attempt to transgress, question and break all rules ? In the darkness of caves, subway yards, city streets or dead-ends, in the dark magic of voodoo rituals or the dark abyss of the web, artists are viruses that dive into the fringes of our worlds to hack, scratch or spoil them, widening through chaos the territories of creation. And so does Pablo Tomek, an artist that draws from (man polluted) reality the raw and precarious material for his work which he practices amidst the constraint of exterior forces.

Rue de Paris
Behind his prescription glasses, Pablo Tomek often scowls. Two direct and cheeky pupils, cultivating this caustic attitude one may find in those who have shaped their reputation by placing their painting above the laws. The streets of Paris know Pablo Tomek well, as he often visited them in his early pictorial experiences : in the recent years the artist whose pseudonym willingly reveals his Polish descent, persisted in corrupting graffiti art’s harmless academicism which, in the early 21st century, wore itself out with its almost crafty formalism and its purely decorative excesses. But since the street belongs to the street, to its wantonness, its misadventures and dead-ends, the artist pushed his practice forward, from the streets of Paris to the Rue de Paris, where he regularly locks himself up in his studio at the heart of the industrial no man’s land that is Bobigny. A lab where Pablo Tomek pushes his back against the wall everyday and forges links between his flow, his attitude born from street art and the abstract expressionist painting’s legacy all the while hijacking working class techniques and aesthetics he spots on the streets. When modern layer painting meets the anonymous utilitarian painting that inconspicuously colonizes all urban landscapes.

The artist explains : « Workers use whitewash - a material made form chalk distilled in water - on windows to hide from prying eyes. This practice is characterized by vigorous arm movements and the traces left from the sponges used. One encounters these anonymous paintings randomly throughout city streets : some are opaque, others aren’t, some movements are dynamic and aggressive while others, created in a more gentle manner, will produce soft and almost soothing shapes. The « worker-painter » therefore shares with the rest of the world a painting that is closely tied to his state of mind, his condition and his emotions. He puts out, voluntarily or not, an abstract and expressive painting in an urban context. His practice therefore offers a new form of visual occupation of the city. By reclaiming this technique, the initial white mutates towards color to eventually become its opposite, black. This inversion allows us to question the consequences of this practice in the history of painting and our relation to public space. »

On the verge of reality
Pablo Tomek gets his hands dirty. His painting holds together through constant tension : between a hand-to-hand fight with the city, its walls, its rules and a confrontation to the canvas. In his studio, Tomek squeezes his sponges gorged with water and paint in order to drench the surface of his painting. The image conjured up by this anarchic spreading, followed by its almost self-destruction by Kärcher, echoes Roy Lichtenstein’s pop brush strokes, Christopher Wool’s insomniac stains, Jean Fautrier’s impasto and Bertrand Lavier’s windows as he’d also made these working-class canvases his own. With his fingers, in the water-logged paint, Pablo Tomek draws raw signs he has spotted in the street, scratching paint the way tourists do the city dust, cactus barks or the surface of antique walls only to leave a trace behind. An American « S » pops up in the black, that of a bling bling tainted hip-hop and used as the streetwear brand Stussy’s logo, that « S » that branded pop cultures and is still drawn in grade-schoolers’ notebooks if only to pass the time. Elsewhere, a still-life emerges : a peach covered with a vagina, like the chance-meeting of emojis, these little graphic signs that describe our emotions 2.0, and graffitis drawn in public bathrooms, these vulgar writings that give away some misfit’s caustic sense of humor or haunting frustration. The words « TOY » or « GHETTO » strike other canvases, reminding us that graffiti is a virile game of ego and street-credibility in which the writing of on’s name aims at becoming king. Elsewhere, one can see a butt (probably coming from a cigarette break, from a tired worker on a building site), an anonymous figure, similar to those engraved on walls and photographed by Brass in the 1930’s, or even the drawing of a gun or a postcard-style palm tree whose naive outline reminds us of precarious prison tattoos.

By concealing these signs drawn from his direct environment - that of the street or the internet where he wanders in the manner of the Situationists - in his paintings, Pablo Tomek extends in his own way te obsessions of the New Realists. As Pierre Restany wrote* : « the New Realists think of the World as a Painting, the fundamental Great Work from which they draw fragments endowed with universal meaning. They help us see Reality in aspects of its expressive totality. It's the whole sociological reality, the common good of men's activity, the great Republic of our social exchanges and trades that is subpoenaed ». It is yet again this brutal reality that irrigates Tomek’s installations staged, for the first time, facing his paintings under the Galerie Christophe Gaillard’s glass roof. For several years, the artist picked up and stored tarps painted by anonymous workers, or sometimes by himself, by chance, when he would spread them out onto city streets to make bystanders believe that his street-painting practice was legal. These plastic rugs painted to the rhythm of chance carry the ultimate traces and outlying projections of a street painting, already erased and forgotten. These stamped-on artifacts are then compressed and placed under stolen double glazing, framed by cutout polystyrene pedestals held together by scrap iron. These sculptures borrow their form from the dumps Tomek walked passed on a street corner and that he had often painted in chrome or gold in order to attract our attention to these often neglected still-lives.

By becoming at pretend Maître-d’œuvre (MŒ) Pablo Tomek revisits in a visual and conceptual way the precarious and utilitarian aesthetics of building sites and urban territories dead zones, and mocks their political burden, such as the ideal of clean cities referring to the broken window hypothesis, the theory that lays at the heart of current security policies. Observing the city through its cracks and outskirts the artist extracts from workers’ rituals and forgotten objects a new language, often unfinished, at the cross-roads of the fringes of painting and urban renovations on a backdrop of institutionalized underground practices and gentrification of working class neighborhoods. Thus Pablo Tomek’s painting doesn't make a liar of Roland Barthes who wrote about Cy Twombly's work** : « take a common object : it is not it's new and virgin state which best accounts for its essence ; it is rather the state in which it is deformed, a little worn, a little dirty, a little forlorn. The truth of things is best read in refuse. »