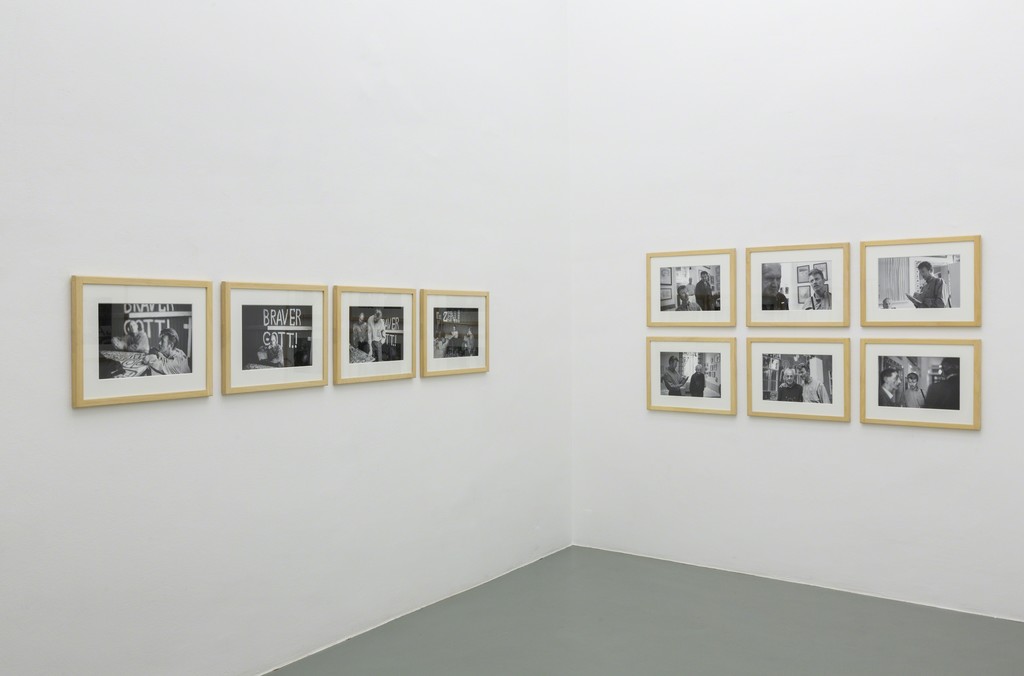 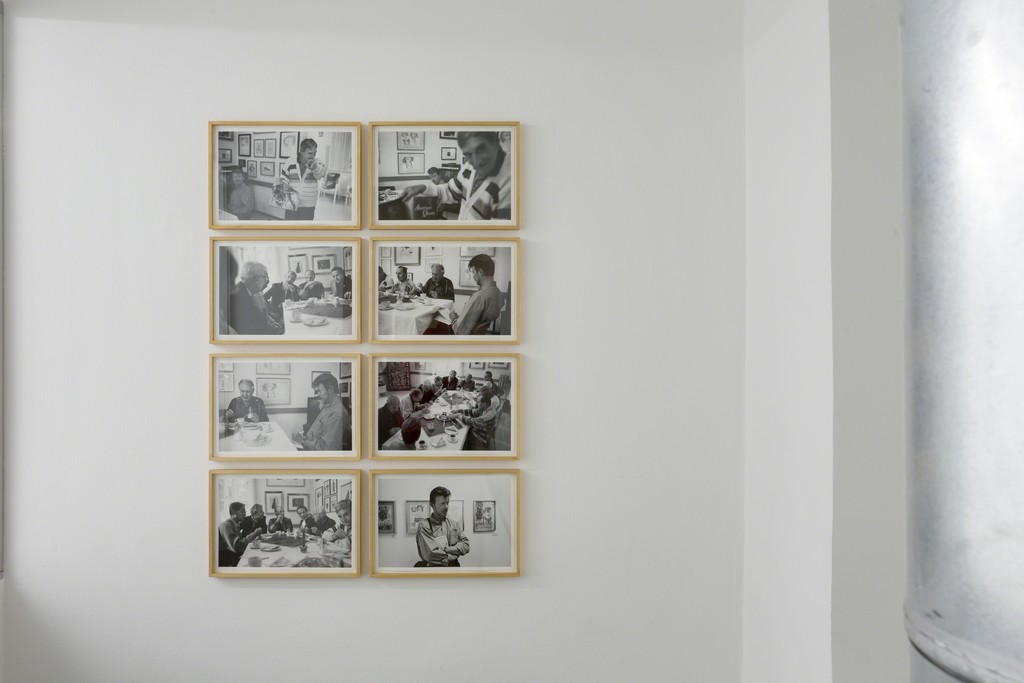 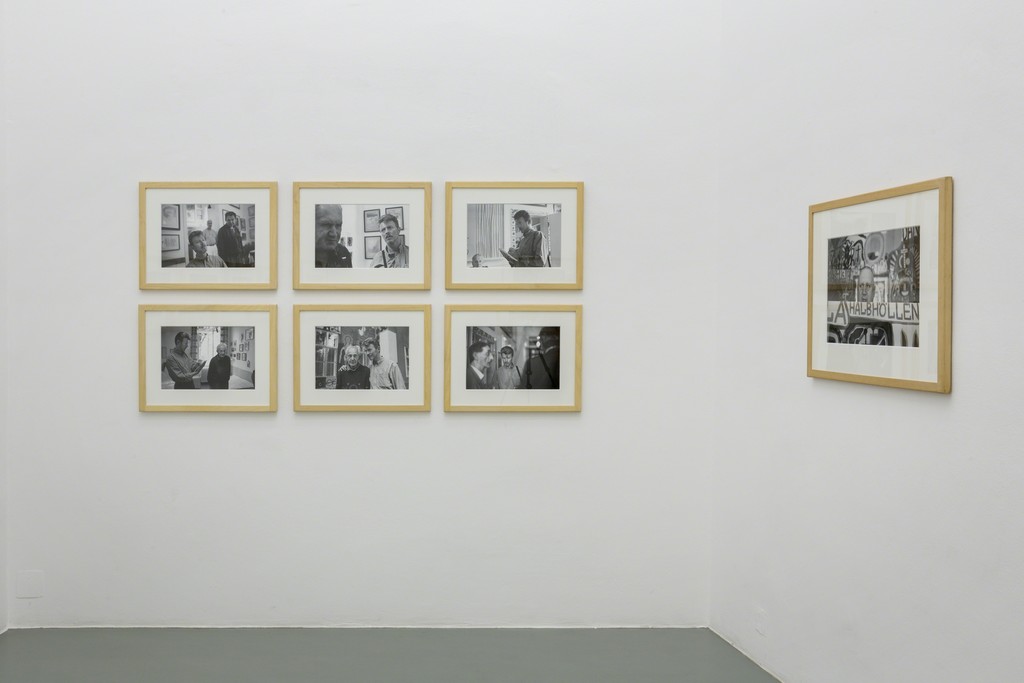 We are pleased to announce “Bowie in Gugging”, an exhibition by photographer Christine de Grancy in our Vienna gallery. On view are 44 not-yet-published nor exhibited photographs showing David Bowie in 1994 during a visit to Gugging, a psychiatric institution and “art brut” community in Austria.
The photographer Christine de Grancy is present when David Bowie and Brian Eno follow an invitation by André Heller to visit the mental hospital Maria Gugging. On many trips—to the Sahara, to Pakistan, and, repeatedly, to Russia—the artist and photographic reporter has documented people’s lives. On this September day, she manages to capture an extremely important event for Bowie: his encounter with the “outsider” artists of Gugging, touched not only Bowie’s entire work, but also a very personal aspect of his life.
Bowie and Eno sit in the grass next to one another, smoking in silence. Their gaze is directed forward, onto a garden building that has been painted over and over and is covered in writing. Concentrating, they decipher words and symbols like hieroglyphs. The messages on the wall are readable. But can they be understood?
Bowie and Eno enter a world beyond the rational when they visit the Gugging clinic in 1994. Since the 1960s some of the psychiatric patients in this psychiatric institution near Vienna have been living and working as artists. At the time, clinic director Leo Navratil encouraged his patients to express themselves artistically, and not just for therapeutic reasons. Through exhibitions and visitors interested in art, they could also remain in touch with society. An artist group formed whose works were shown as “outsider art” in renowned museums and bought by collectors.
The two musicians did not visit the clinic as world stars. Few here know who David Bowie is. He is here as a modest visitor, making sketches and taking notes, observing and seeking to understand. “WELTALLENDEGOTT” (universe- end-god) is among the words written in large letters onto the wall of the shed, with symbols like crosses, dots, and ornaments meandering all around. There is something cheerful in this and something repressed, but none of it makes sense. Gugging is a place where the understandable ends and another system begins, one that interests Bowie— because he might be tracing a very personal story here.
Photo artist De Grancy’s shots of this visit reveal his absolute concentration: an analytic attentiveness for all details in these encounters with the patients of Gugging. Standing in August Walla’s room, Bowie is focused and alert like a cartographer charting a foreign continent. The room the artist Walla inhabits is a cave covered in writing and painting, a spatial art work of those ornaments, symbols, and word creations, which he also used working on the interior and the outdoor facilities of the clinic. “Cave” (Höhle) and “hell” (Hölle) are neighboring terms for him; he calls God not good, but “well-behaved” (brav). His associations are improbable and surprising; his work is absolutely free and yet coherent, beyond all art discourses.
At the time, Bowie himself is in search of artistic relevance, not success. His entire oeuvre revolves around otherness, around breaking the norm. This freedom of the Gugging artists, who pursue their work beyond consensus, beyond all evaluation standards, attracts him.
One of the most well-known among them is Oswald Tschirtner who, with his elongated, elegant tadpole gures, has created an utterly unique drawn universe. At the time of the visit, Tschirtner, who always signed “O.T.,” is already in his mid-seventies. Bowie puts his arm around the schizophrenic artist. The gesture is unusual for the most inaccessible of all pop stars.
But Bowie seeks the closeness of the artists; the visit in Gugging is more than creative research for him. Schizophrenia has occurred several times in the family of his mother, Peggy Jones, and his half-brother was also diagnosed with it. Ten years older than him, Terry Burns spends some time with Bowie’s family and acquaints young David with jazz and poetry. From 1969, he lives in the Cane Hill Clinic, which Bowie immortalizes on the cover of his record The Man Who Sold the World. In 1985, following several suicide attempts, Terry Burns takes his own life. Bowie’s own fear of having a psychological illness catches up with him and has repeatedly served as a basis for his songs. Aladdin Sane, one of his personas (“A Lad Insane”), calls it by name. At the same time, the world of insanity is an inexhaustible creative material for Bowie. In Gugging, this world becomes a concrete experience for him through the encounter with the psychiatric patients and their art works. “In retrospect, you wonder what may have been going on inside David Bowie on this day in Gugging,” says Christine de Grancy, whose images are cautious, yet haunting. “His quiet, thoughtful, piercing gaze. His silence, his voiceless questions, which may have formed within him—all this somehow reverberates in these images. It was a day when Bowie couldn’t help but think of his lost brother.”
Immediately after their visit to Gugging, Eno and Bowie started working on a new album; it is their first collaboration since the legendary Berlin trilogy from the 1970s. Their impressions from the clinic are their material; the concept album is about art, death, and insanity, which form the fundamental questions of being outside of the norm. Outside is released in 1995. When presenting the album in September of 1995, Bowie himself says that it was inspired by Gugging and had developed “from the atmosphere of Gugging.”
Outside is critically acclaimed as the first real Bowie album for years. It is dark, mysterious, and driving. Often, Outside is interpreted as a precursor of an impending n de siècle. But Bowie was not just trying to anticipate the new millennium. It is the immediate transposition of his encounters at Gugging, which touch on his own existential questions. When Outside was released David Bowie was the same age as his brother Terry when he killed himself.