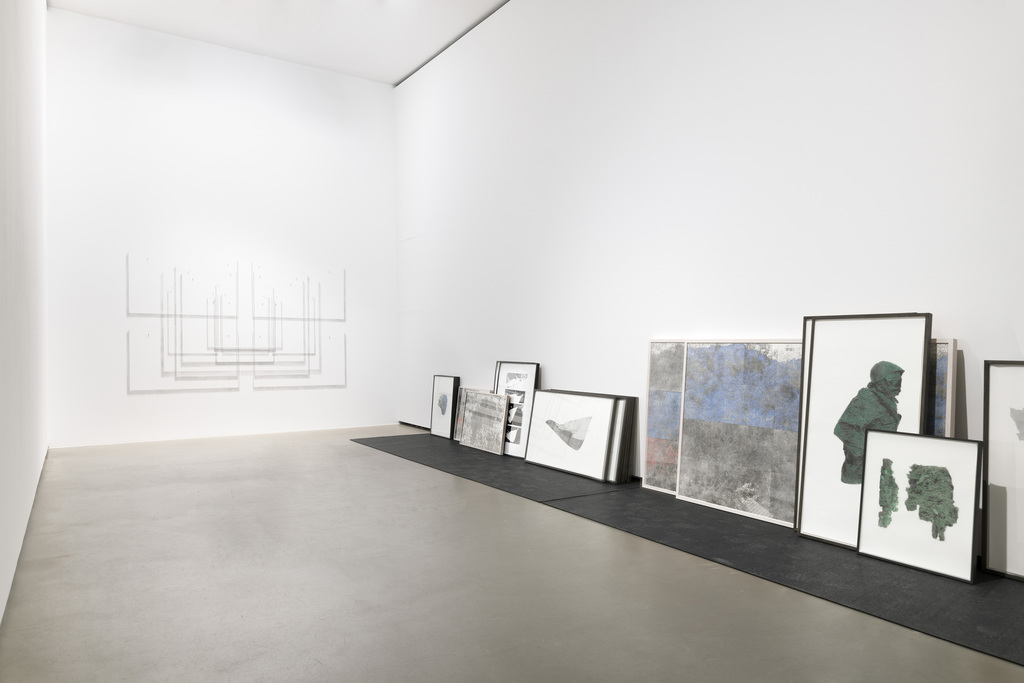 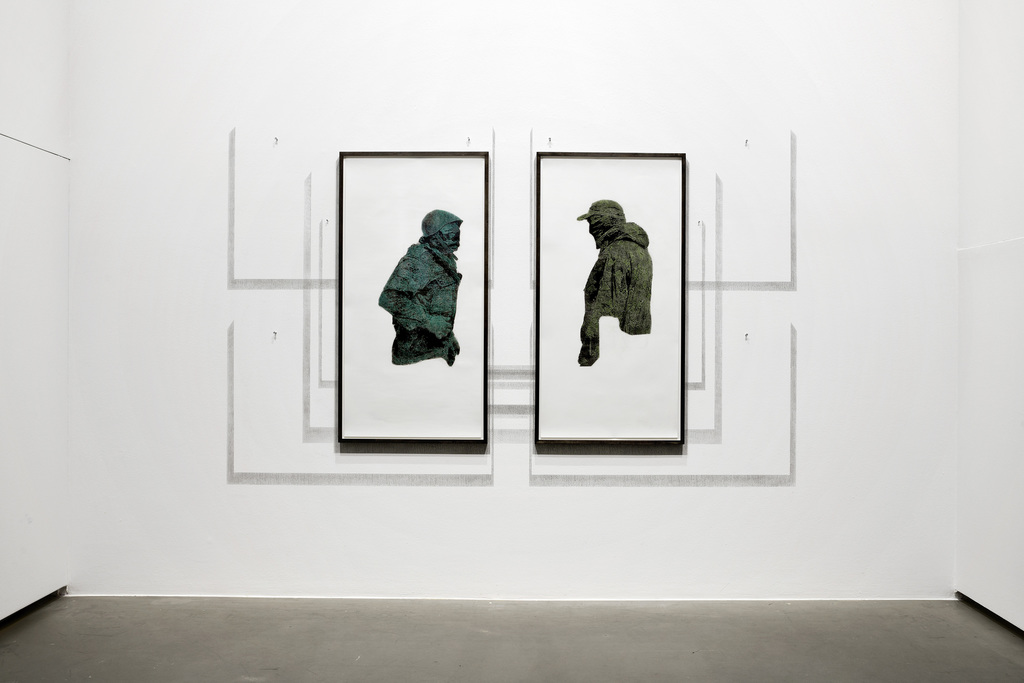 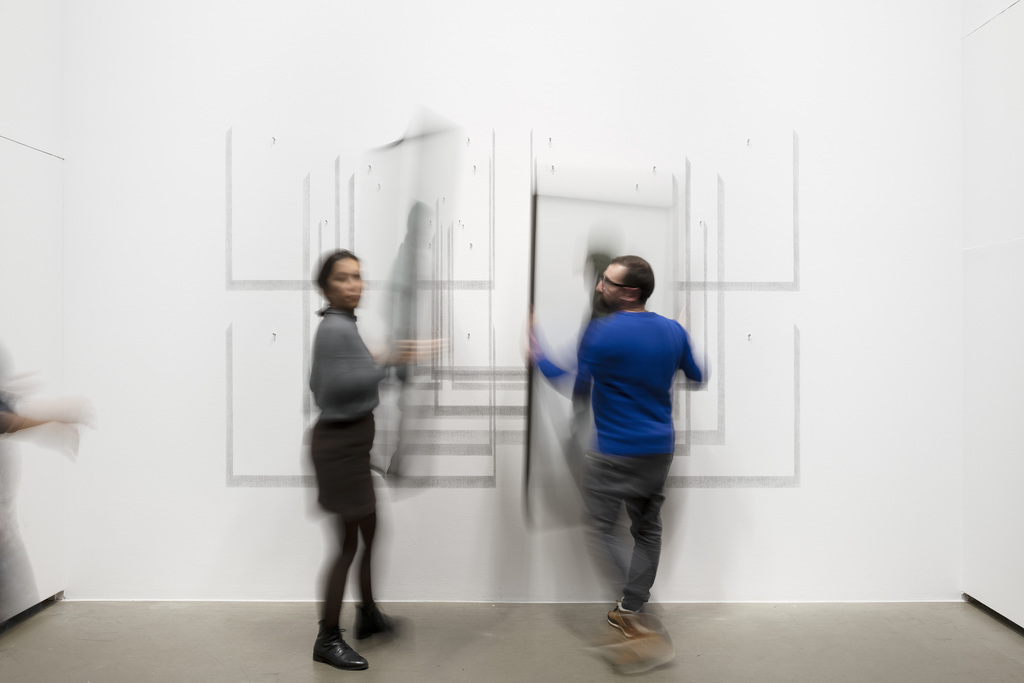 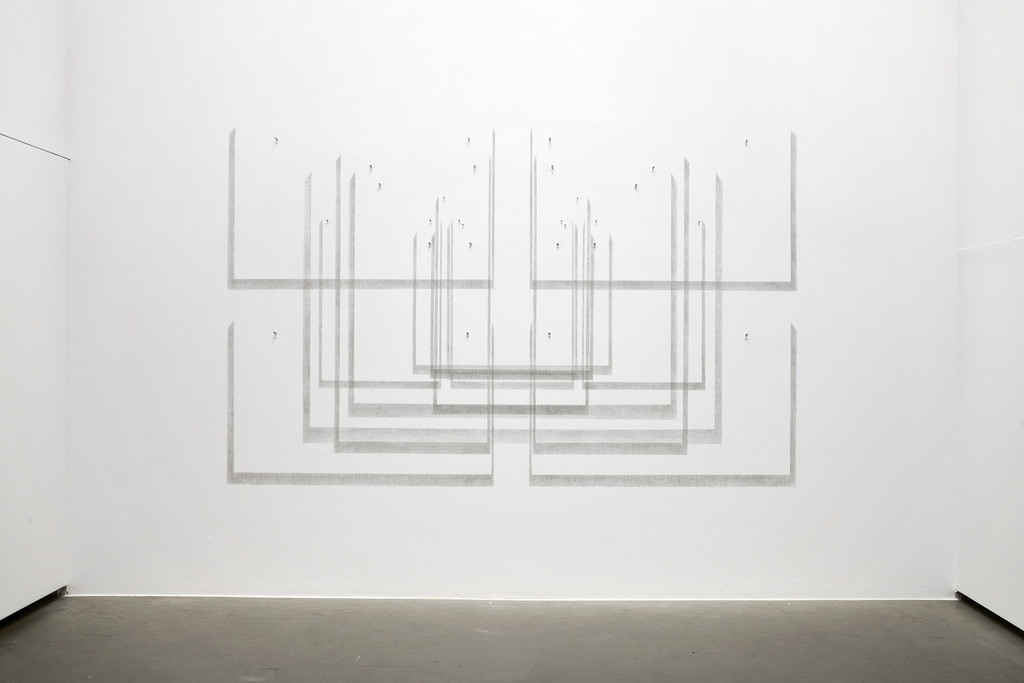 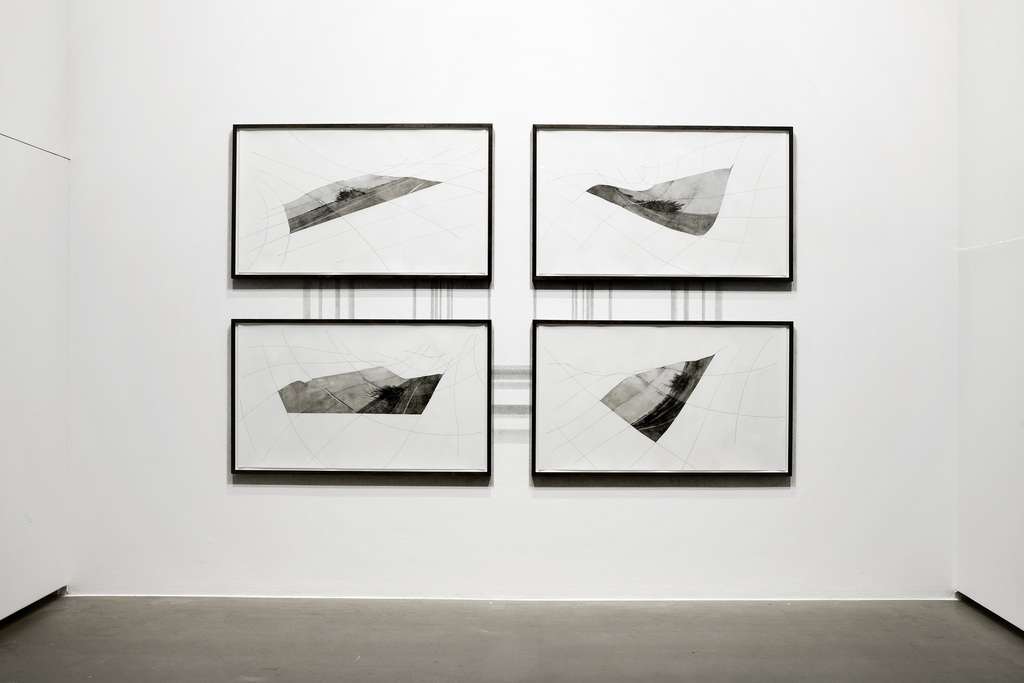 The photograph of a riverine landscape lined with trees provides the prologue to the exhibition: a small bridge in the center of the picture, footpaths, and an artificial water inlet point to human intervention. But Nakonechna opens up another pictorial level by presenting the black-and-white photo as a screenshot taken during the digital processing, with scaling at the upper edge of the picture and the Photoshop hand tool, which now seems to float above the treetops.
This picture of a peaceful, but also manipulated landscape is to be understood as counterpoint to the exhibition’s central group of works, for which, on the end wall of the gallery, a situation was created in which the drawn contours of the individual picture formats serve as placeholders for many possible variations of how they could be hung.
In these works, Nakonechna takes recourse to themes she has been concerned with for several years: the political dimension of landscapes, the arbitrary shifting of borders and the conflicts associated with that, but also our relative distance from pictures from unknown contexts and the attempt to approach them through analytic questioning.
Two black-and-white transfer prints with the identical motif, a residential building concealed by thickly foliaged trees and bushes, were processed once with blue and black paint and once with blue, black and red paint. Black, blue, and red are the colors of the flag of the proclaimed, but internationally unrecognized “Donetsk People's Republic”; black and blue are the basic colors of the Ukrainian administrative district, Donetsk Oblast. While here the colors of the respective flags are laid over the landscape like a filter, other works are devoted to the territory in its cartographic representation. For example, the contours of the occupied regions of Donetsk and Luhansk are cropped as a fragment of a landscape photo, or a white sheet of paper folded like a map is shown spread in the hands of several people. The territory is apparently being negotiated here, whereby it remains unclear if the tree assigned by a number in the drawing is really a tree or perhaps rather an explosion.
Another work focuses on the phenomenon of camouflage: in the spotty green and black of, once again, cropped contours (which here, however, cannot refer to a specific region), only on second glance does one recognize a corpse lying on the ground and a soldier in uniform. This mimesis lets the human body fuse with its surroundings; one can read this picture as a symbol of a war that has become invisible, a war that has now lasted almost six years and that (according to a UN report) in the meantime has claimed about 13,000 human lives.
The visitors are invited to put together their own coherent way of hanging this collection of drawings, so that during the course of the exhibition, constantly changing perspectives on and narratives about these “alien images” arise.