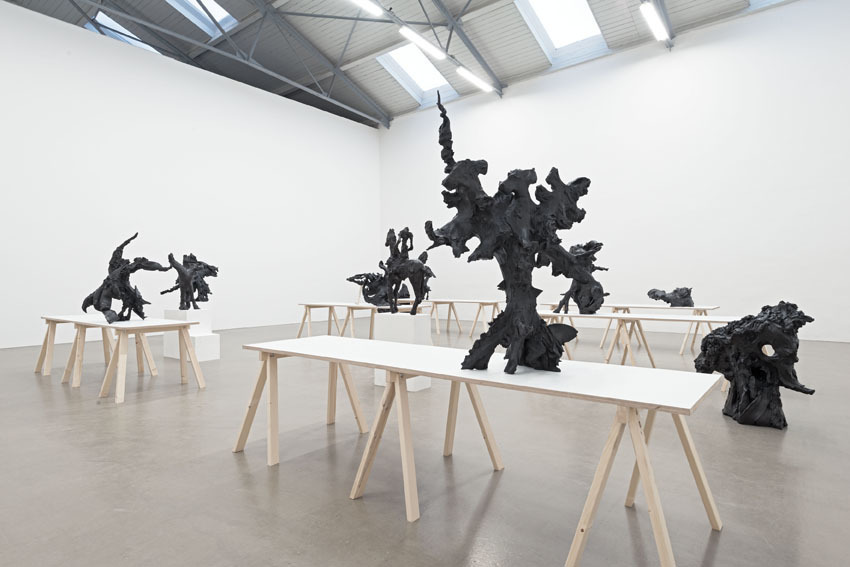 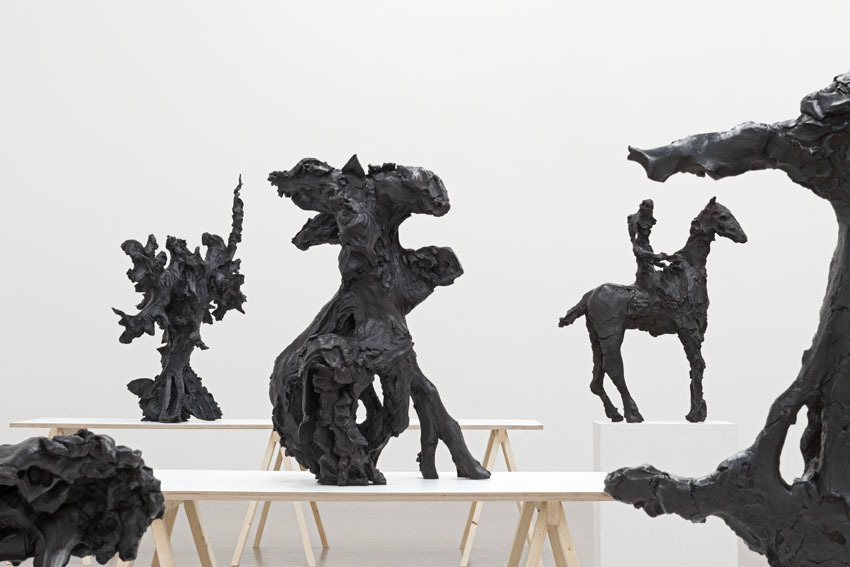 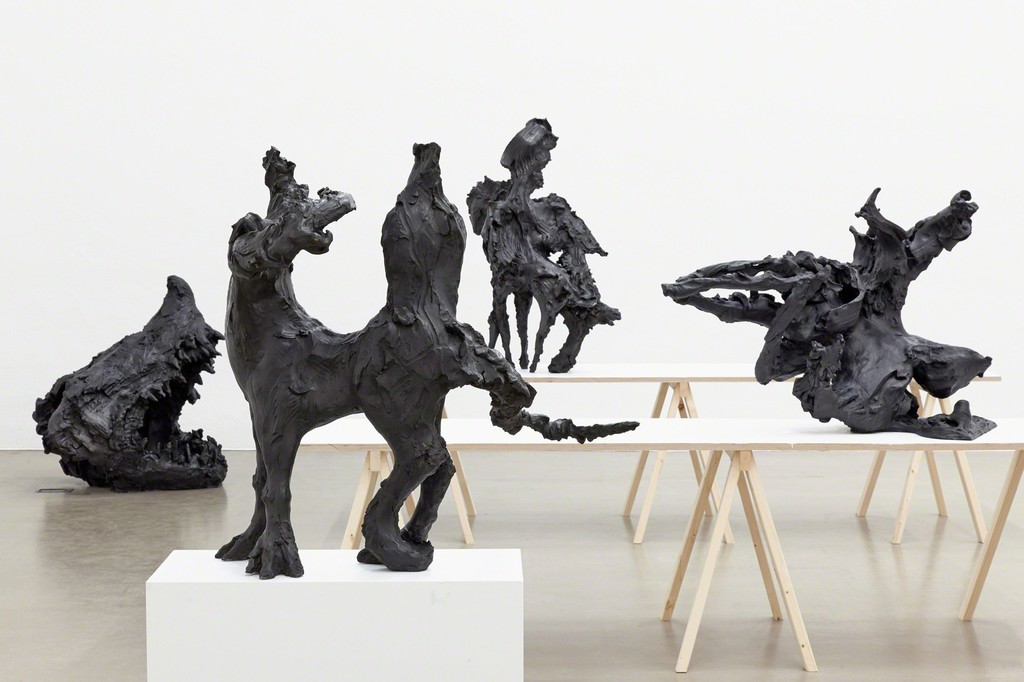 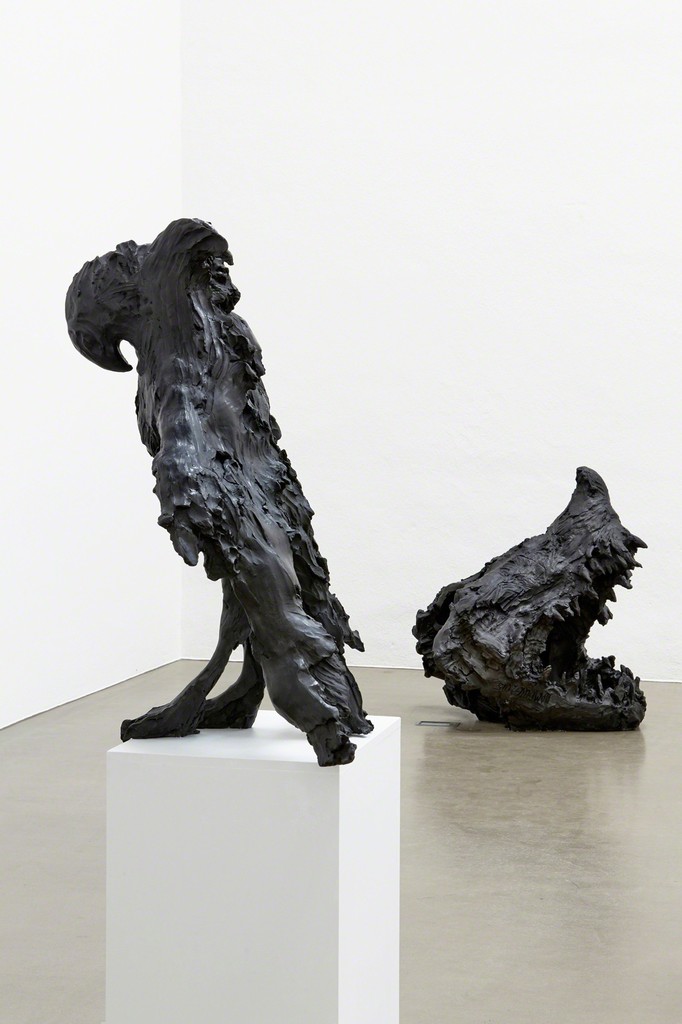 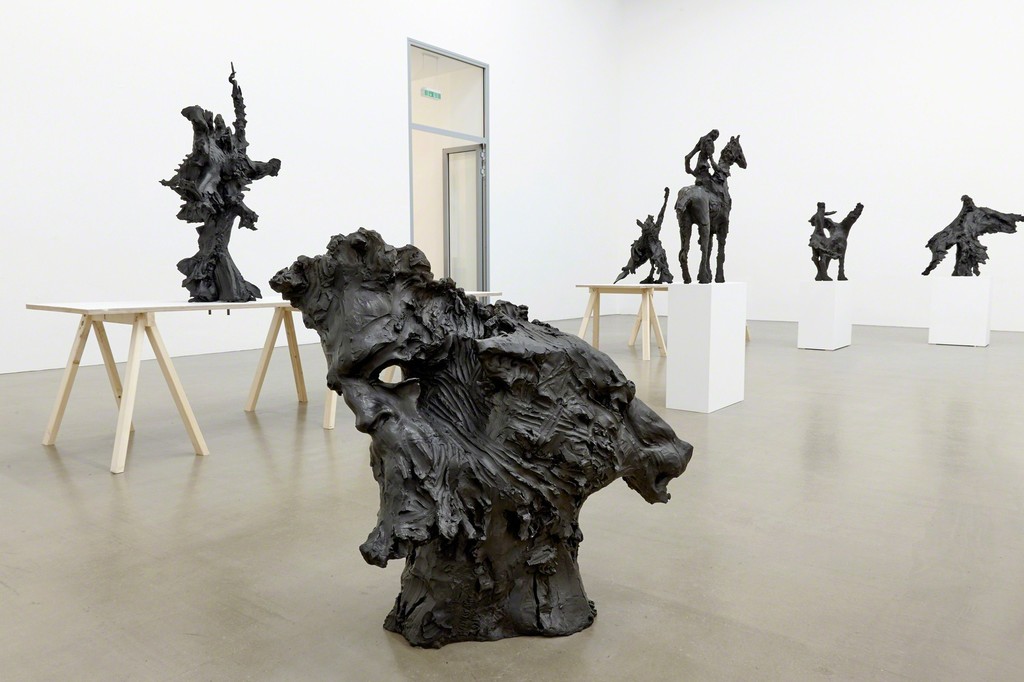 Twelve bronze sculptures with a black patina occupy the space in Stella Hamberg’s current exhibition. The works on display are all about one meter tall; this alone visibly distinguishes them from the artist’s expansive sculptures of recent years. She
arranged the sculptures on simple working trestles and on the bottom in the exhibition room – evoking her working and studio situation.
Here are sculptures frozen somewhere between animal, plant, and pattern of motion: a grotesque shark’s head with mouth wide open and a bird in a crouching position; a bow with two heads and wing or tail forms that seem to be in motion and end in loosely joined clay slabs.
A larger-than-life head of a youth, modeled as a scenic excerpt, lies next to a visibly incomplete, strangely prototypical form; an equestrian figure stands alongside obviously mixed beings that take up where Stella Hamberg left off with “Hund” (“Dog”) in 2013.
There are traces of fingers and blows, sharp-edged grooves and fissures in which the work’s production process shows itself to the viewer and becomes palpable. Much remains coarse, nothing seems aestheticized and exaggerated or unambiguously summarized. Sketches and approaches stand with equal significance beside pictorially worked-through figures; everything is in motion. The form closest to the viewer is partially distorted or used as a template for a reordering, for example in the bouquet-like form that may simultaneously recall a vertically erected bundle of little hammerhead sharks. A weird pattern of motion overlaying itself, a jittery sketch spiraling capriciously into the air and then suddenly pausing in frozen motion.
Raw material encounters pictorial condensation; naïve eying encounters analytical questioning; the tragic confronts the comical, the grotesque the beautiful, the methodical the figurative. Forms and black contours arise in the white room.
The impressive but never oppressive presence of Stella Hamberg’s works does not derive solely from the effect of size and material – the traditional bronze statue’s usual support – but results from a many-layered ambivalence inherent in the sculptures. Thus, Stella Hamberg’s works can be categorized as figurative sculpture, but they never take the figure as their exclusive theme, and so they are just as little oriented toward the production of a figurative depiction. In postmodern manner, the artist cites diverse styles and thereby develops her own form language out of a synthesis between detailed works and the creation of expressive gestures and facial expressions, on the one hand, and the presentation of seemingly formless material, on the other.
Stella Hamberg’s sculptures always remain open to different interpretations, and this openness appeals to the productive power of imagination. Conversely, the artist preserves for her sculptures a neutrality, since every transformation and completion of the works remains the product of the viewer’s mental-sensual act. Stella Hamberg processes the classic sculptural themes, which she gives new form and sets in motion. A head, an equestrian figure, an animal figure, a fragment, amorphous forms are set in formal and substantive motion and seem never to come to a halt.