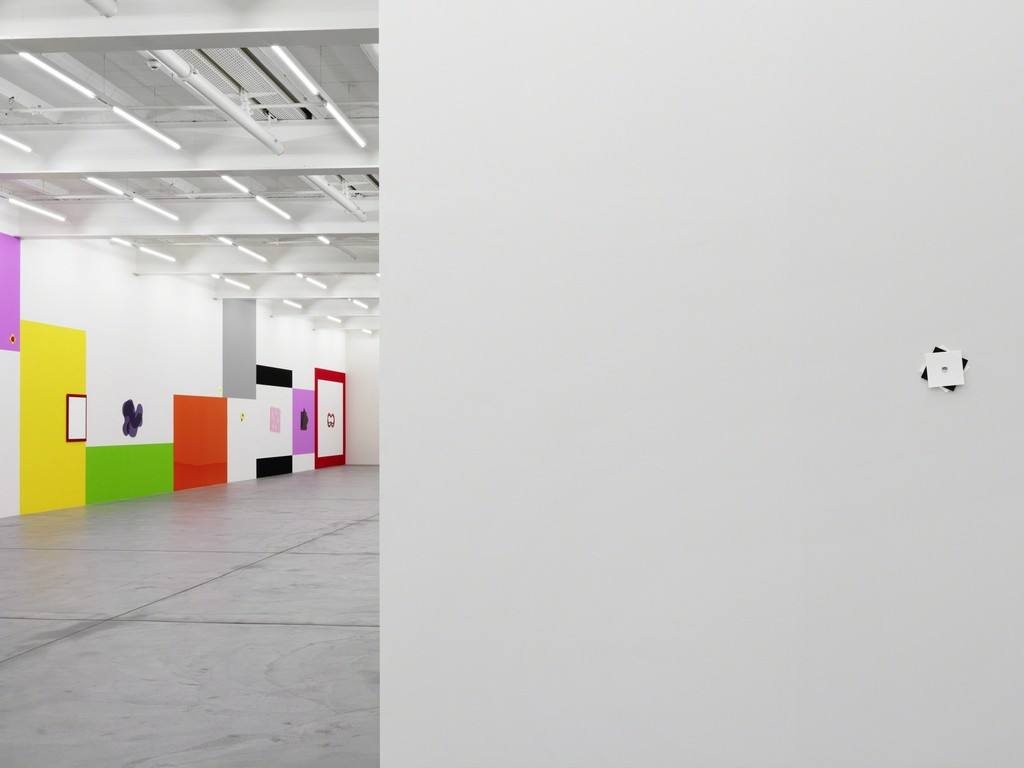 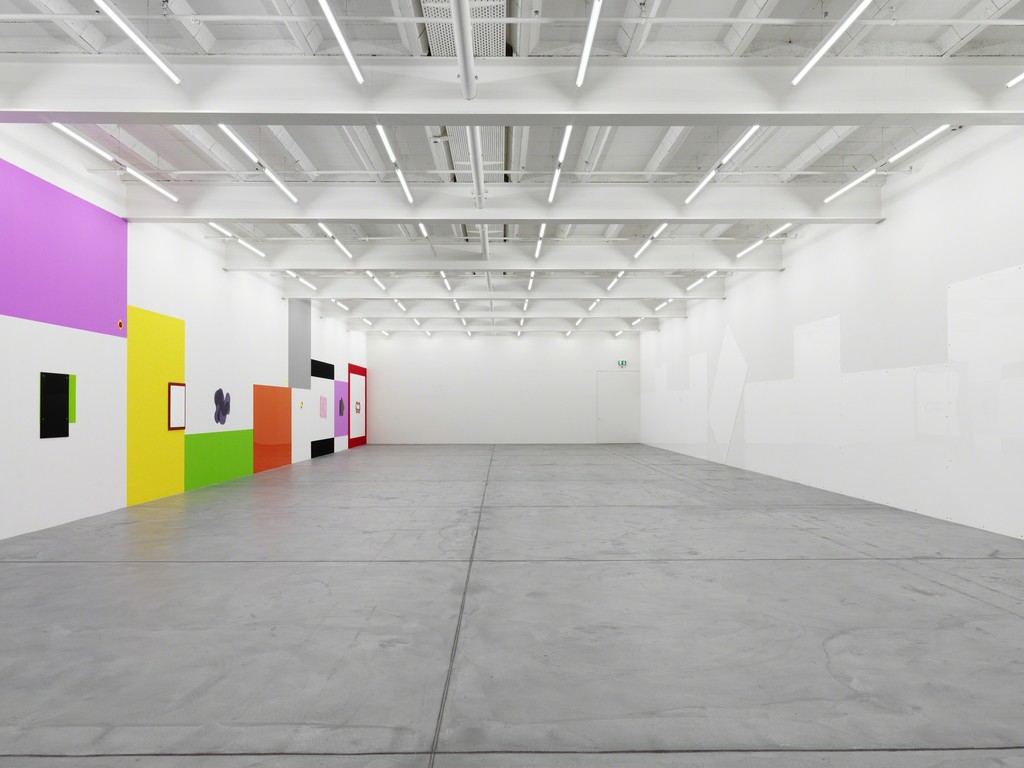 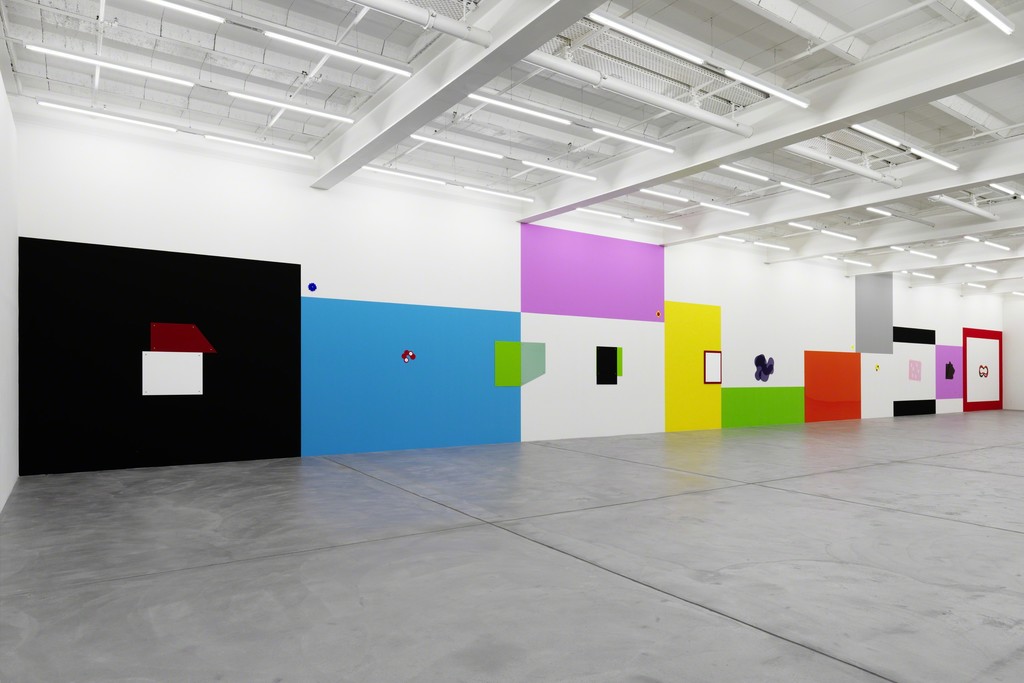 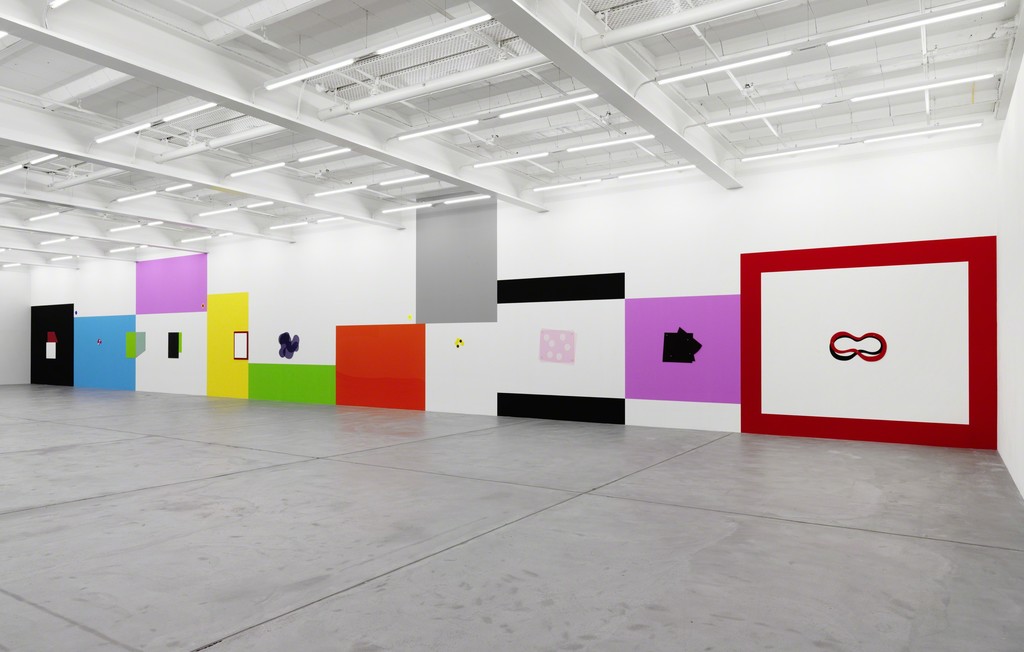 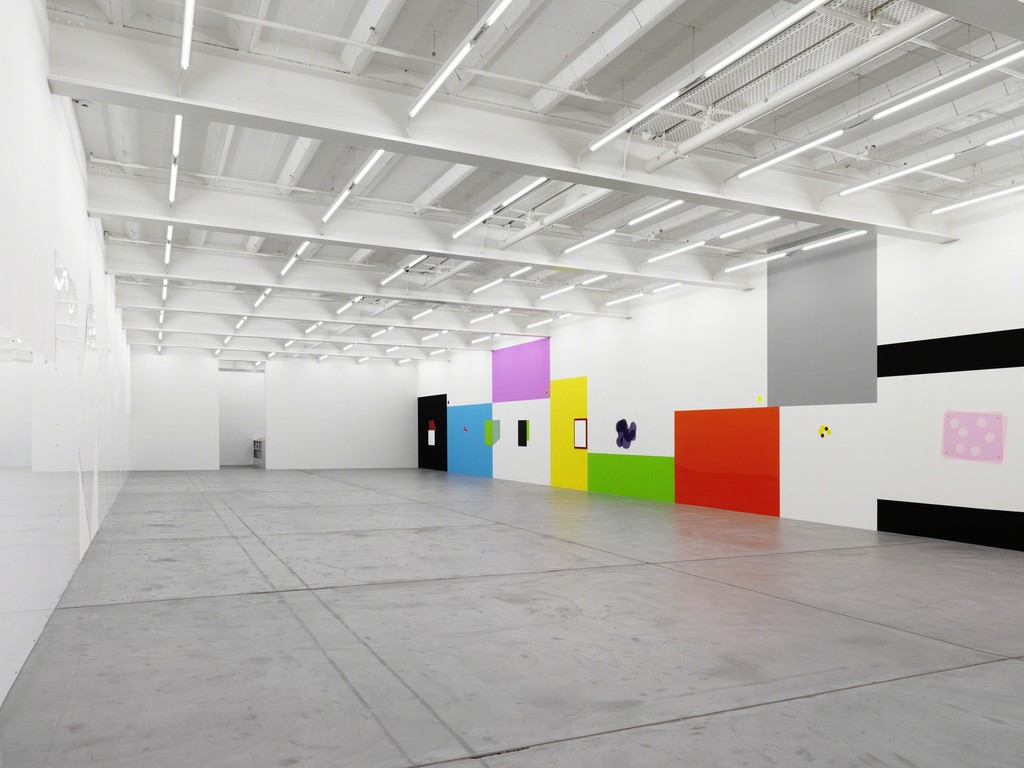 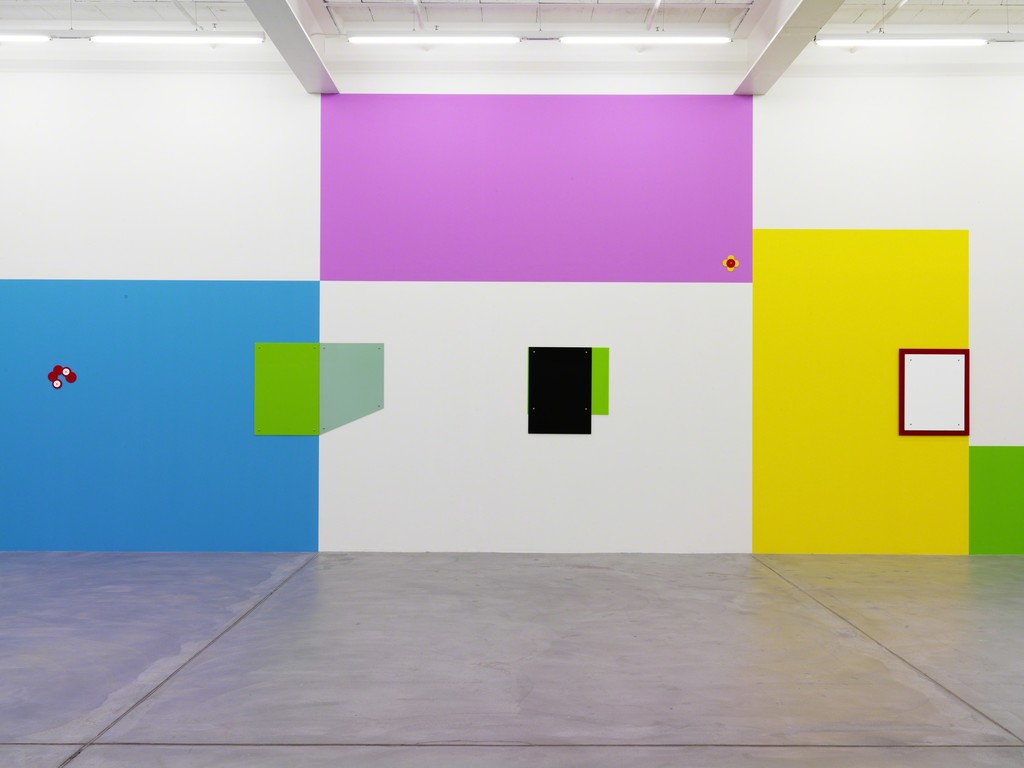 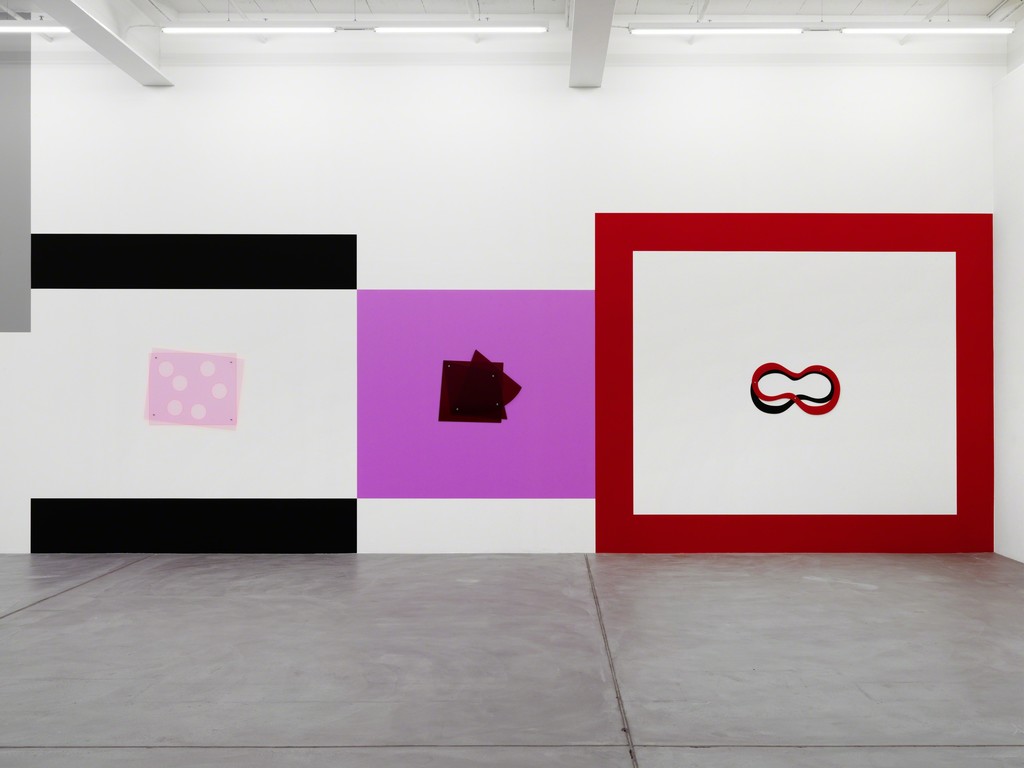 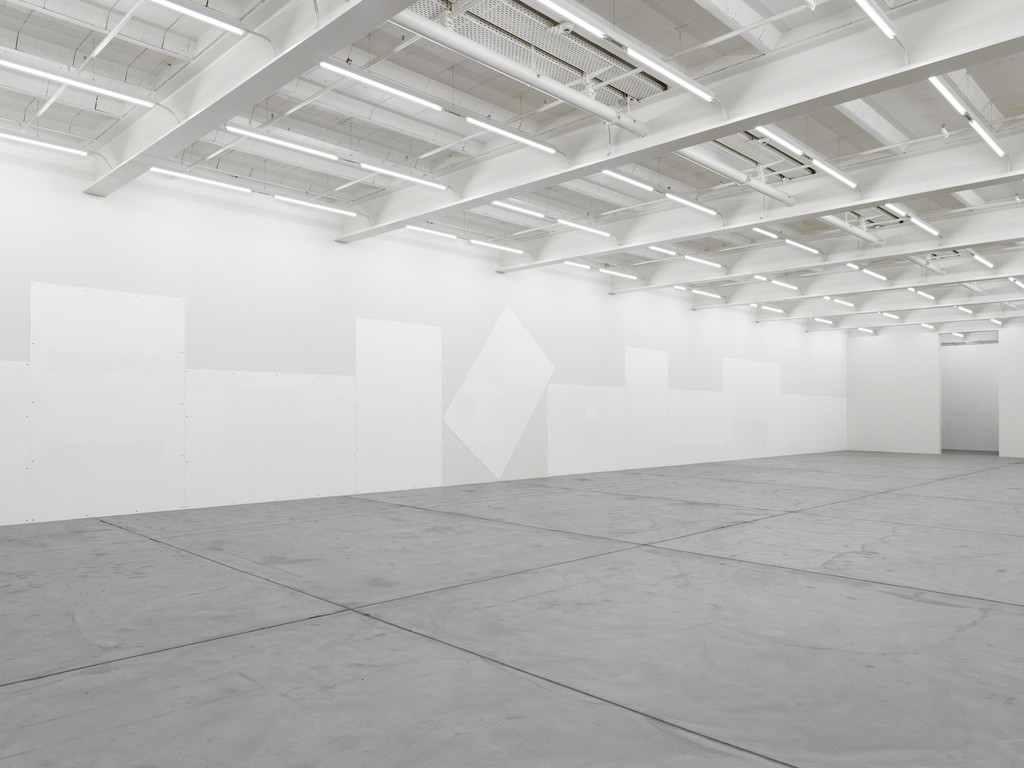 In his ninth solo exhibition in the Galerie Eva Presenhuber Gerwald Rockenschaub is showing a new group of
works: under the title bend it, Rockenschaub has assembled recent wall pieces made of overlapping sheets of
plexiglass. The artist has combined these works with painted surfaces in an installation one can enter, in which
the boundaries between two- and three-dimensionality are blurred.
What are referred to in German as the “bildende Künste” are known in English as the “visual arts.” Whereas the
German phrase emphasizes the “bildend,” or shaping, element in non-representational art forms, the English
term registers our visual perception of works of art. In the former it is the act of creation that is uppermost, in the
latter it is the appreciation of what is created. In the work of Gerwald Rockenschaub both aspects are equally
acknowledged. The artist deliberately designs his works in such a way that the act of seeing itself comes to the
fore as a consequence of what is seen.
In the 1990s Gerwald Rockenschaub was one of the first artists to consistently design his works on a computer and
delegate their fabrication to special firms and craftsmen. His pictures, objects, and sculptures are often made of
such industrial materials as colored plastic foils, aluminum, PVC, or plexiglass, which the artist has used
continuously since 1987. Rockenschaub extends his emphasis on machine fabrication to his choice of titles, for his
works always carry their technical designations.
Rockenschaub’s recent plexiglass wall pieces are unlike early works from this group in one essential point:
heretofore the artist affixed the sheets, some transparent, some opaque, directly onto the wall, as in a
monumental installation in the Galerie Paul Maenz in 1989. He now layers them. In addition, he cuts them into
irregularly angled or playfully biomorphic shapes or riddles them with holes. As a result, the colors of the sheets
blend into new shades, producing multiple visual overlappings and clashes.
As always in his plexiglass works, Rockenschaub is concerned with the interplay between presence and absence,
making visible and concealing. For the artist generally uses transparent sheets that are very thin, so that seen
from a distance they cannot be distinguished from a painted surface. In bend it Rockenschaub heightens this effect
by combining his objects with actual geometric wall paintings. In this combination the eye scarcely perceives the
two mediums—painting and relief—as different.
Also characteristic of Rockenschaub’s exhibitions is the fact that the artist involves himself in the way the
presentation responds to the site’s architectural features. Thus bend it responds to the tubelike space of Galerie
Eva Presenhuber in that Rockenschaub has placed the plexiglass works on the opposing long walls. On the one
side are color works and wall surfaces. Across from them the artist has mounted twelve white, rectangular
plexiglass sheets of identical size against a background that has also been painted white. Eleven of the sheets are
arranged in an alternating rhythm of vertical and horizontal: one element diverges from this pattern in that it was
tipped in order to fill the entire length of the wall with the plexiglass sheets. The separation of colored and
colorless surfaces heightens the optical confusion, for the white plexiglas sheets blend into the wall more than
their richly contrasted counterparts.
As in any kind of visual deception, from Baroque trompe-l’oeil to the popular impossible figures of an M. C. Escher,
art imitates our view of the world based on central perspective, only to then unmask it as an illusion.
Rockenschaub does not imitate reality, however: his works are based on the aesthetics of geometry, and follow the
laws of the interaction of colors. Unlike Josef Albers, who also knew that only appearances do not deceive,
Rockenschaub extends the fundamentals of the psychology of perception into space, places them in relation to the
body of the individual viewer. The fact that his works also exhibit the perfection of industrially produced materials
makes the visual deceptions all the more obvious: it is not their smooth surfaces that deceive, it is only that their
flawlessness reveals the shortcomings of the sense organs we tend to trust in our perception of reality.