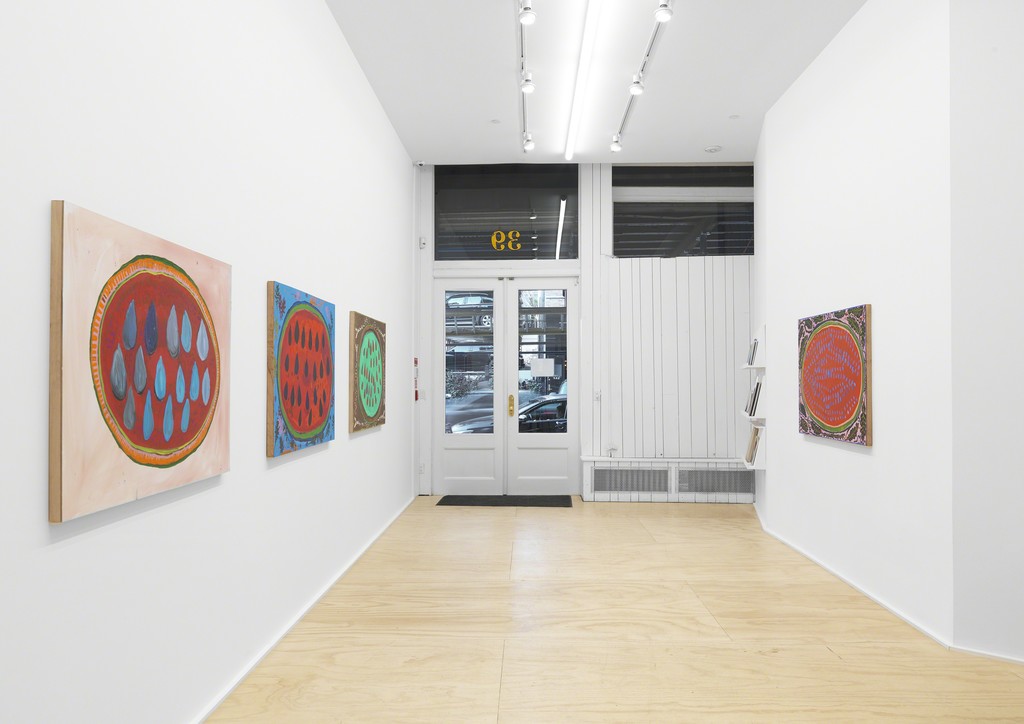 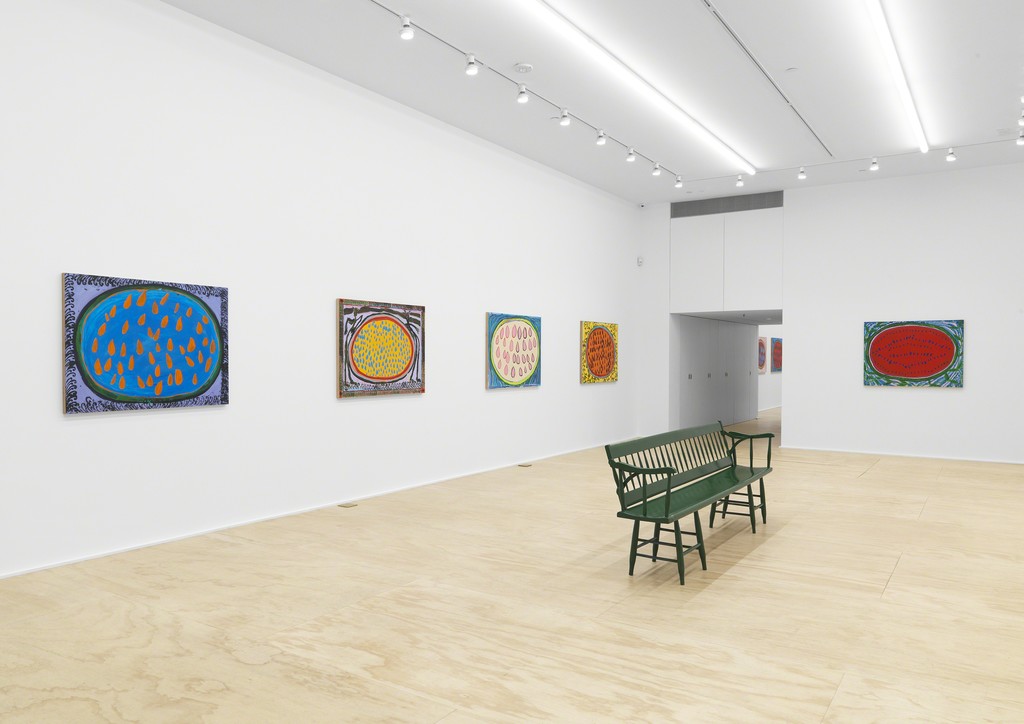 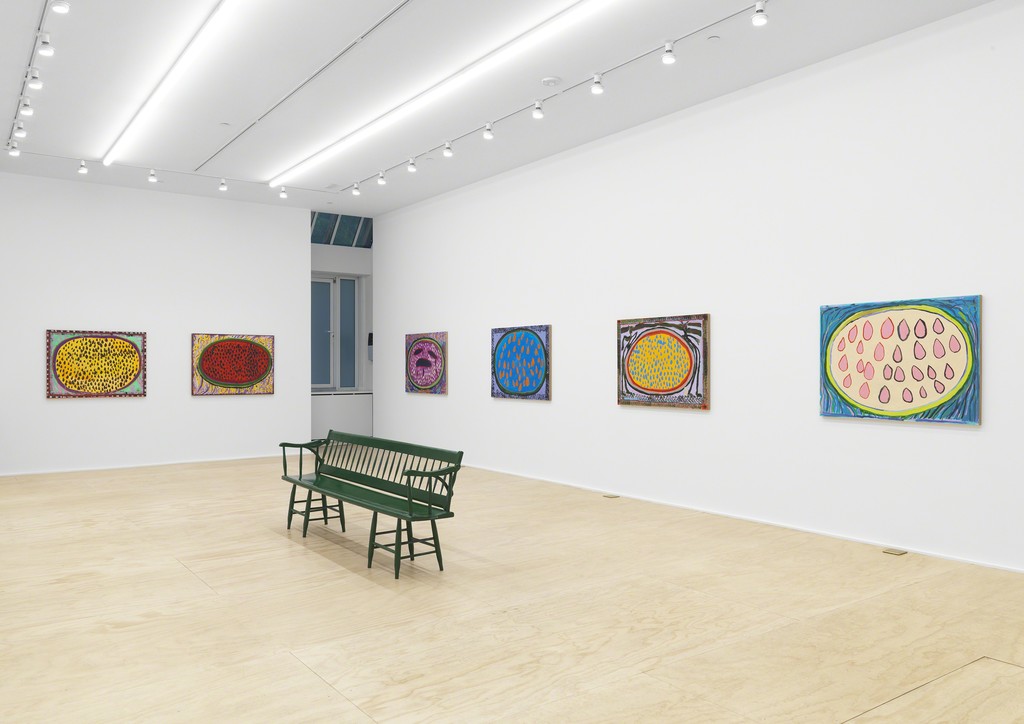 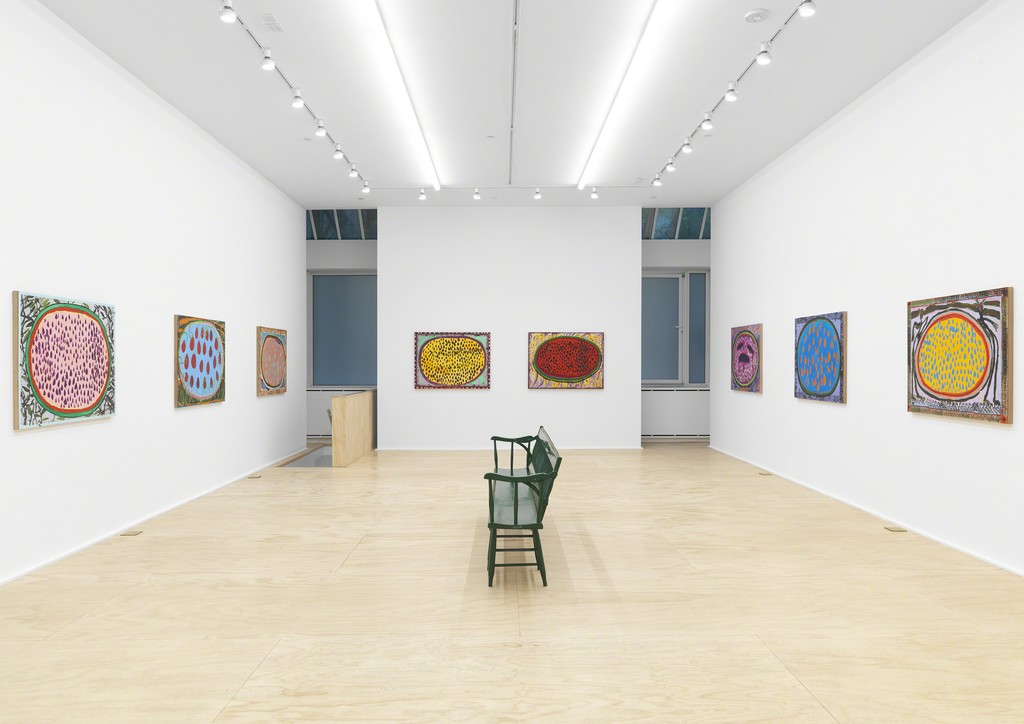 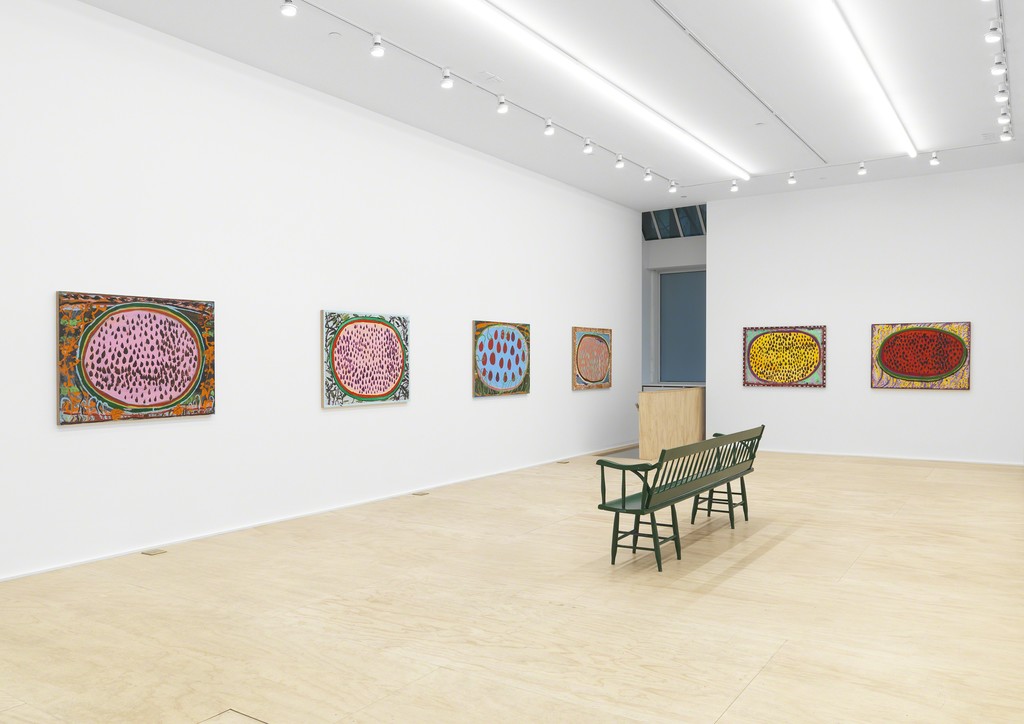 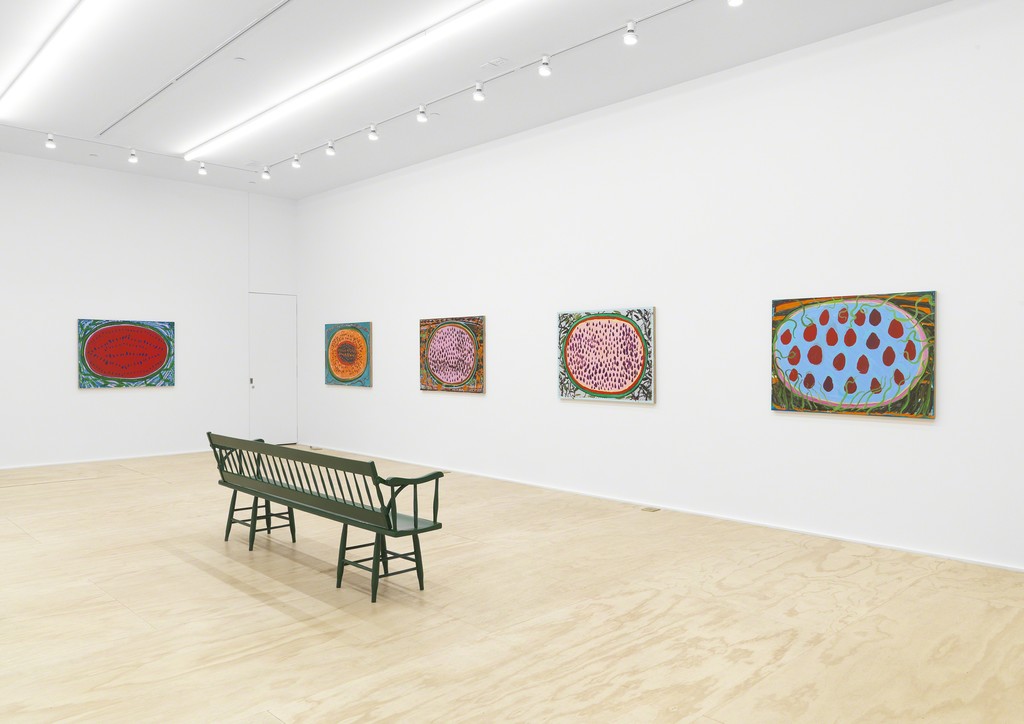 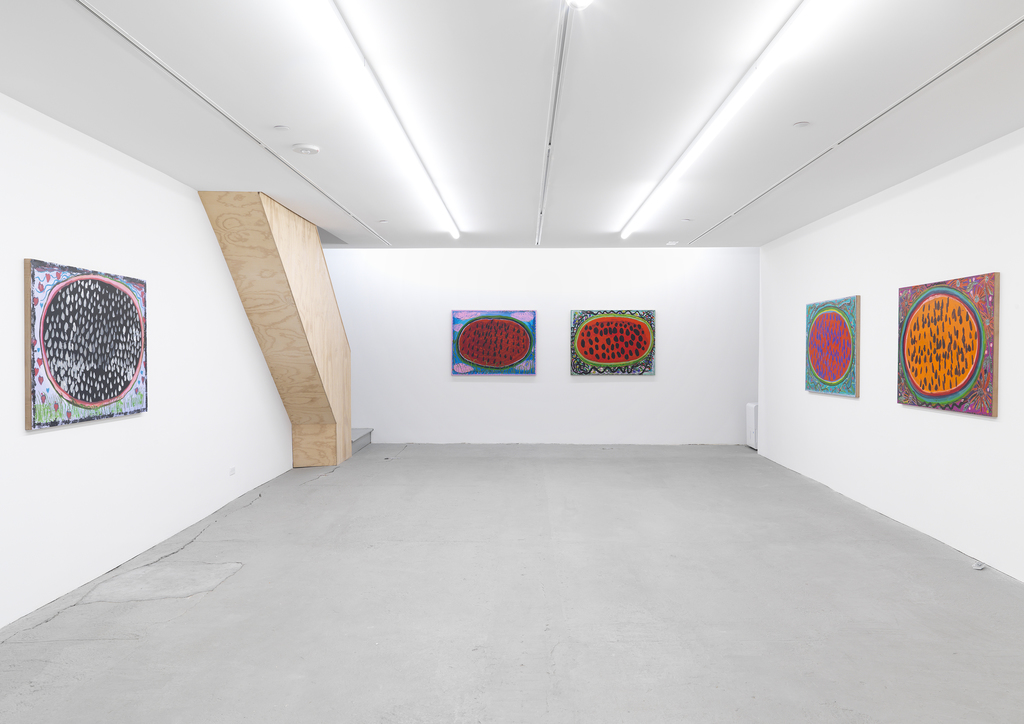 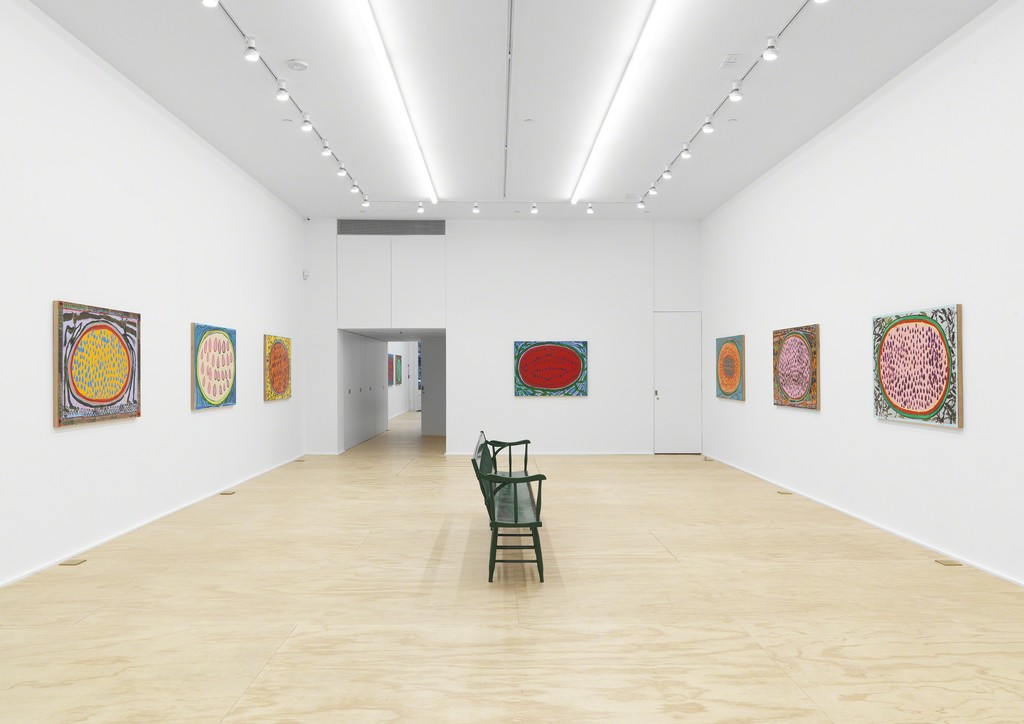 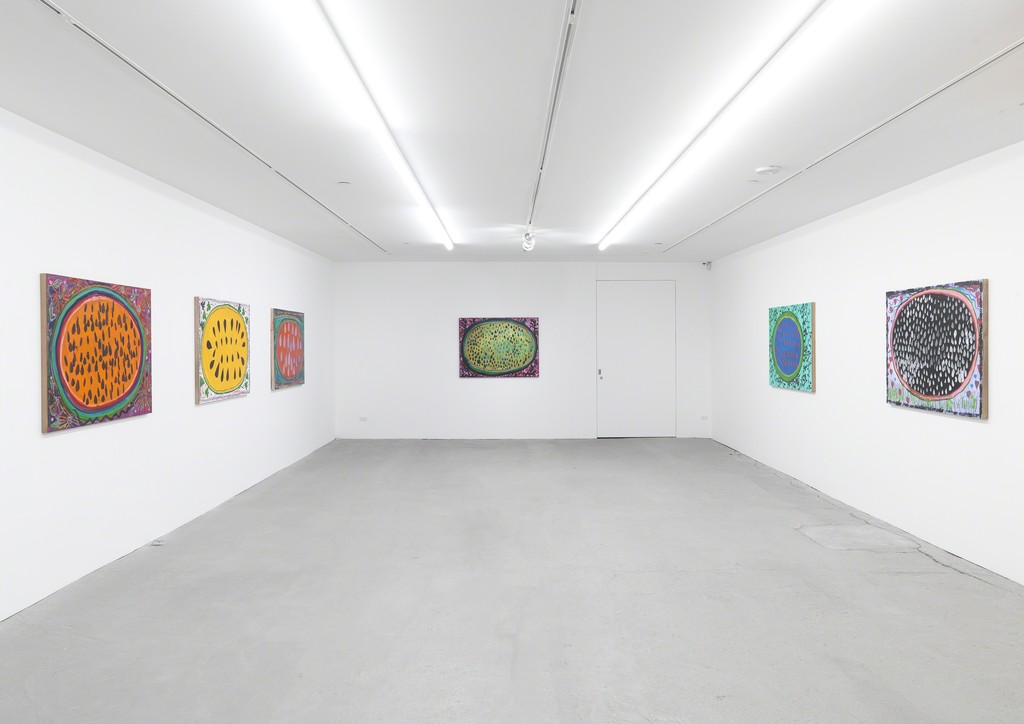 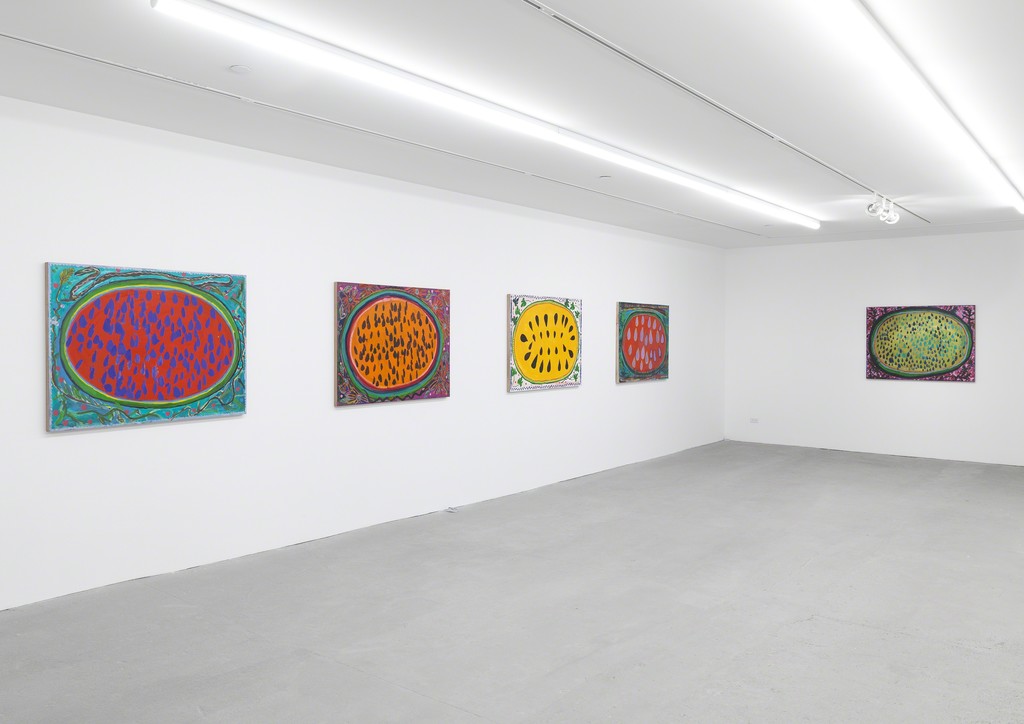 FFor this exhibition Josh Smith will show a set of paintings depicting Watermelons. Particularly, the paintings are of split-watermelons or more specifically the open face of a cut watermelon. In art history, this big contrasting fruit has been depicted countless times in all sorts of ways. Sometimes as an element, and sometimes it is the whole painting. In the case of the paintings Josh Smith will be showing, the melon covers the whole panel. These paintings are modestly sized, colorful, and not too dark. Smith honed in on this subject to project because he liked the way they looked. He knew it would be difficult to depict the subject and attempted it could make sweet paintings. As it grows, the watermelon is a ready-made, perfectly formed sculpture.

In his words, “I wanted to make these paintings because I knew, though they are simple seeming, that they would be tough to hold together. I wanted it to feel pointless at the beginning and then gain merits as I uncovered or created problems and then either solved them or forgot them. No painting is going to light up a watermelon nearly as well as it lights itself up. It’s a common object in lots of worlds and I have always been attracted to the fruit. I thought for a long time about the colors; the shapes, and the seeds and wondered how I could process those strong features. Foremost, I was drawn to the formal qualities of the subject. I showed the melons split, because, with all the contrast I saw in the fruit, I saw an opportunity to take restriction off of color combinations. Really, I could not figure out how to make the paintings worthwhile until I showed the fruit opened. There was nothing to render. That was humbling but fun to realize. They looked cool but it was not what I wanted. In the future there might be a reason to try again, but it is not the next thing I want to try.

Regardless of how these watermelon paintings turned out, I knew the painting would innately fail. I gained impetus and comfort from establishing that for myself in advance of trying these. The hope was for glorious and gleeful failure. This is not a bad thing and I was eager to receive what I got when I made these simple paintings. Perhaps the term “failure” does not apply well in this situation. In any case, a little bit, I think of my paintings like kids. Not human kids but animal kids. As a parent to animal kids, I understand that no kid is perfect. Besides, Who wants a perfect kid? It is fine after a while because you can not control it anymore.

I always want to work uphill, but this time I desired the hill to be steeper and sideways. As opposed to other paintings I have made recently which featured palm trees, fish, or the grim reaper, the watermelon was a nebulous form which I was hoping would start to pull my mind back into puddle thinking. Puddle thinking is what I sometimes put my brain on when I work. I love the puddle world but it is a darker place. For my own sake, I had gone away from that for a minute. In the puddle zone you can forget about making something cool or perfect. You never know how deep a puddle is. Nor can you tell what is in it. Puddle forms change as the water gets deeper or as it dries back up. Somehow, strangely, these melons have triggered that desire to try things I cannot much control. When I am satisfied, rather than nervous, about not being in control, it works good for painting.”

Josh Smith first gained attention in the early 2000s with a relatively straightforward series of paintings of his name. Later, he began to unwind the name to create a series of sharp, colorful, and inscrutable abstract paintings. In recent years, the abstract paintings have morphed into more pictorial paintings built around simple subjects such as leaves, fish, skeletons, ghosts, and palm trees. Those subjects were chosen, partially, because they can be rendered easily by most anyone who cares to try. Therefore, the rendering of an image does not over-involve itself with any attempt towards pictorial virtuosity. For Smith paintings are largely hosts for expression and experiment.

Josh Smith (b. 1976 Okinawa, Japan (his father was in the military) after a number of moves grew up mostly in East Tennessee. He has lived in New York since 1998. He has had several solo exhibitions in the United States and abroad at institutions such as the Bonner Kunstverein, Bonn, Museo d’Arte Contemporanea Roma, Rome, The Brant Foundation, Greenwich, CT, Centre d'Art Contemporain Genève, Geneva, De Hallen Haarlem, Haarlem, and MUMOK, Vienna. He has also participated in important group exhibitions such as The Painting Factory: Abstraction after Warhol at the Museum of Contemporary Art, Los Angeles, Le Printemps de Septembre in Toulouse, ILLUMInations in the 2011 Venice Biennale, The Generational: Younger Than Jesus at the New Museum in New York, MoMA's The Forever Now: Contemporary Painting in an Atemporal World, and most recently, Painting 2.0: Expression in the Information Age, which showed at the Museum Brandhorst, Munich, and traveled to MUMOK, Vienna. His works are in numerous public collections including the Centre Pompidou, Paris, MUMOK, Vienna, the Whitney Museum of American Art, New York, and the Museum of Modern Art, New York.