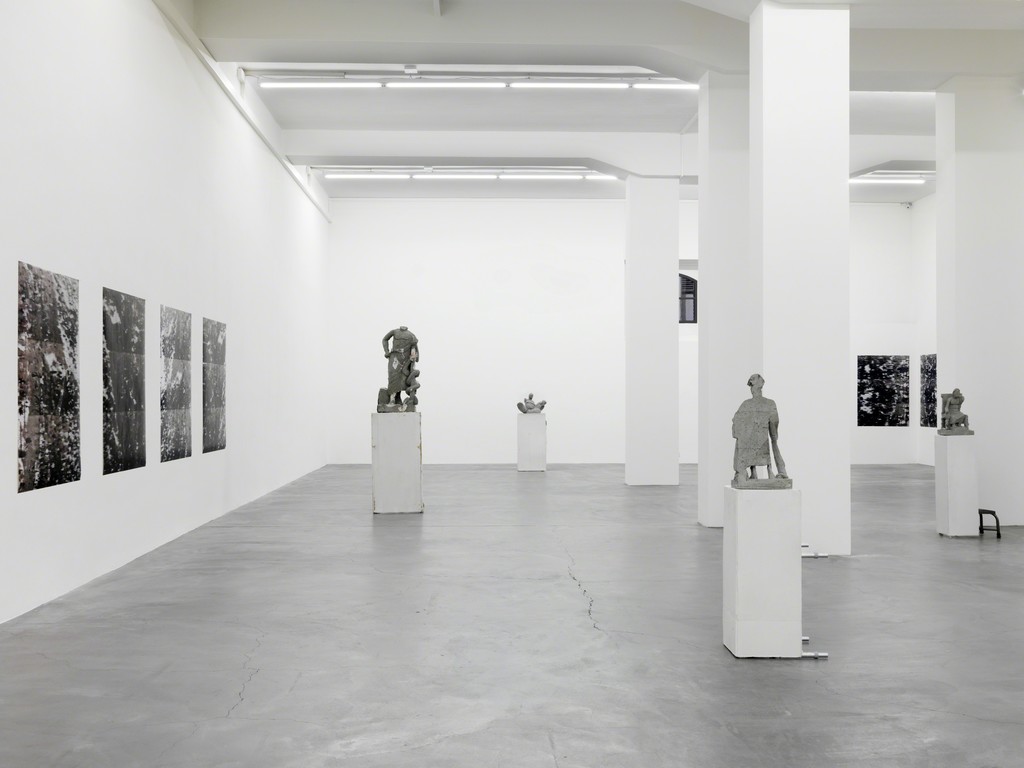 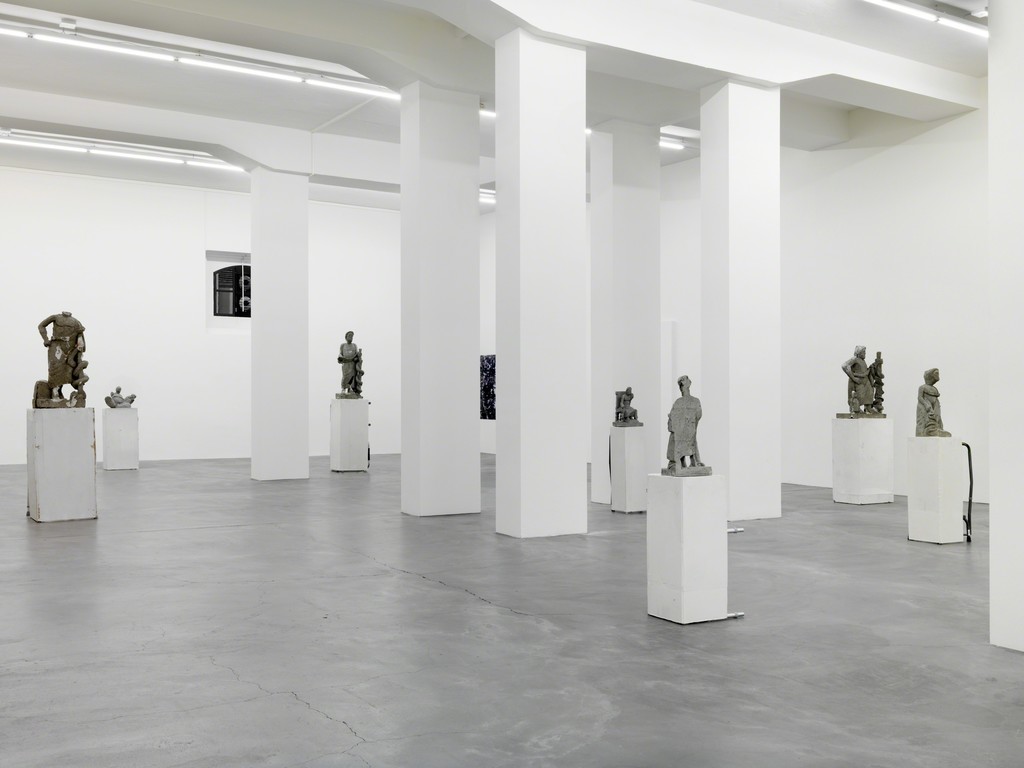 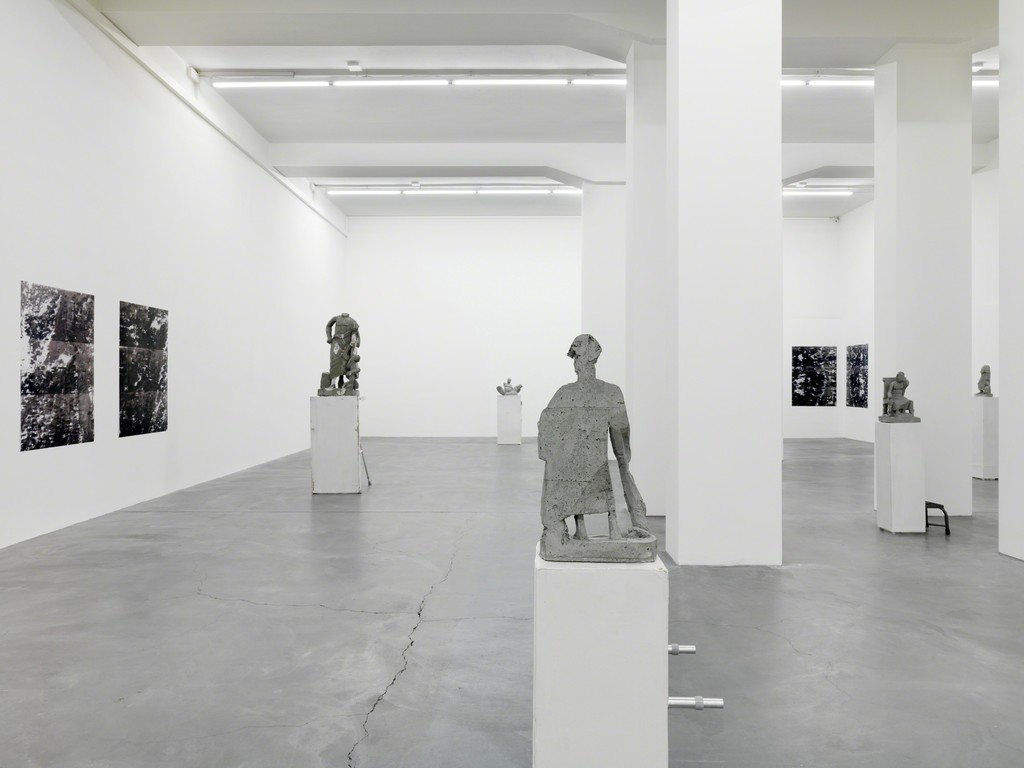 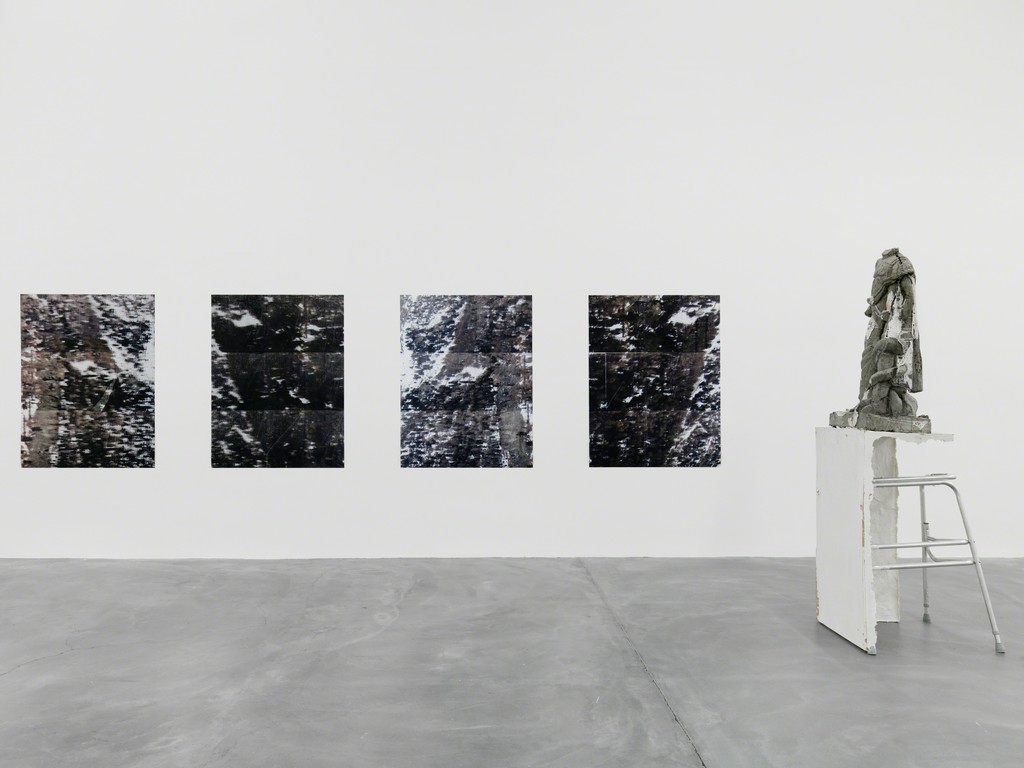 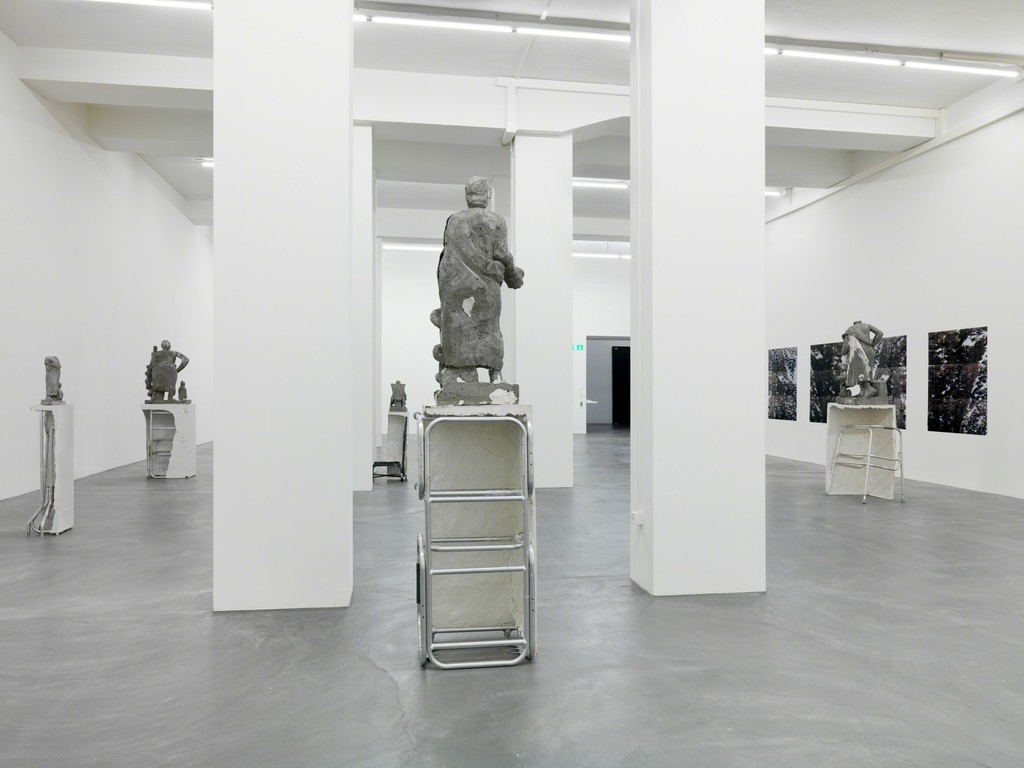 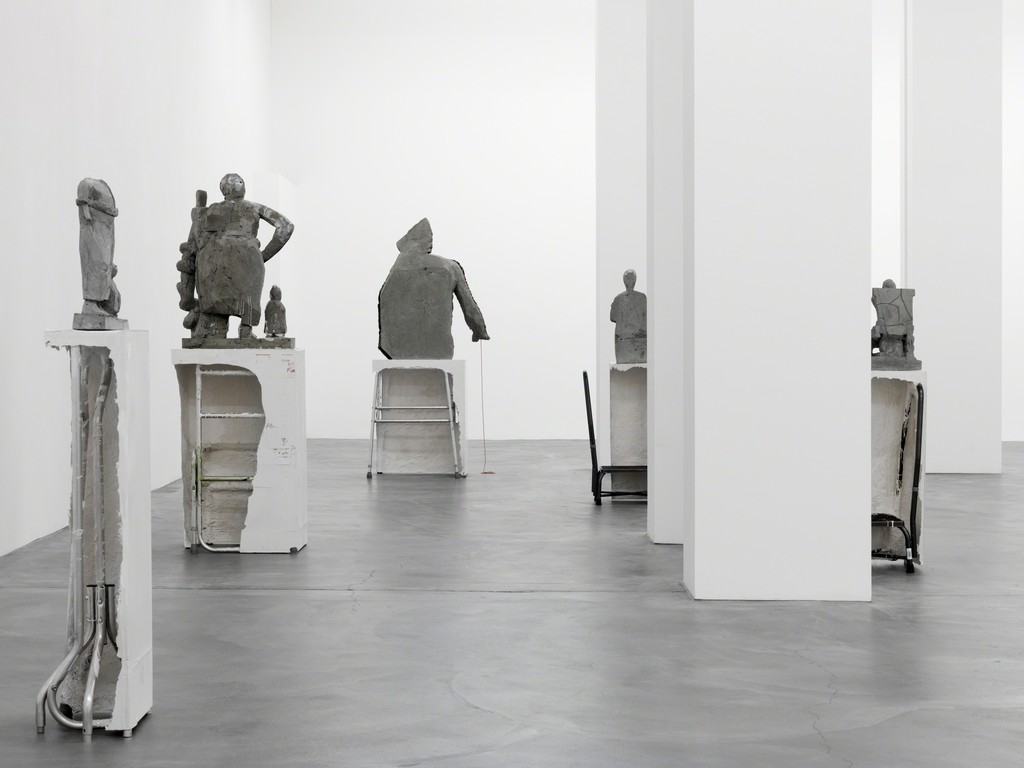 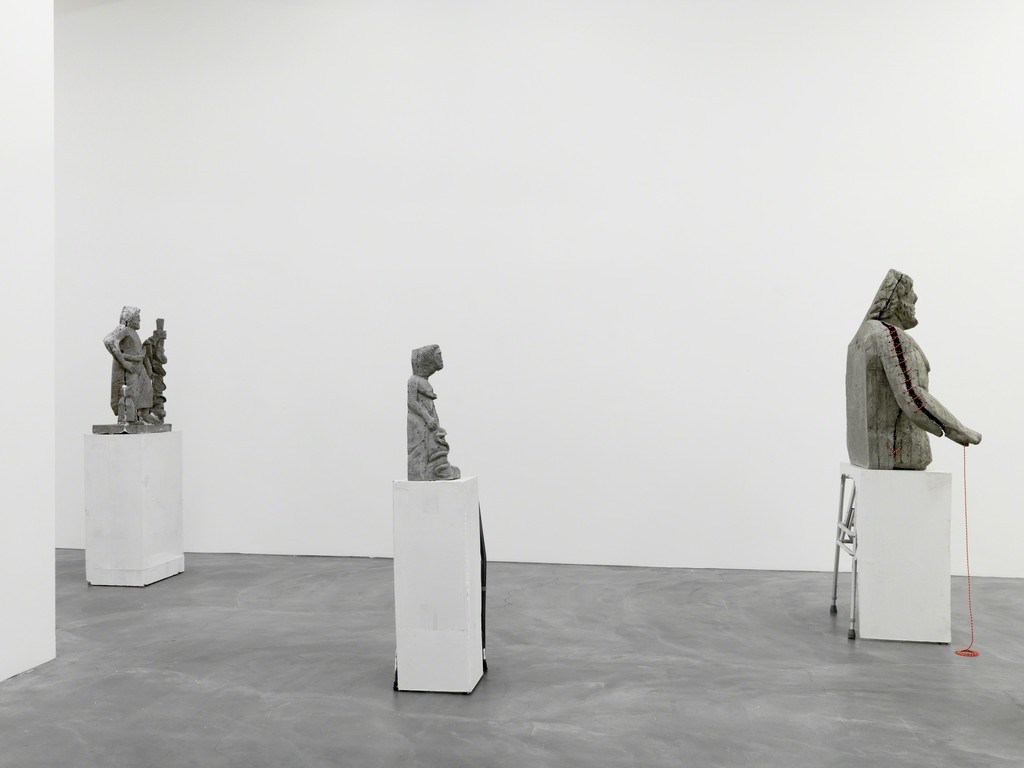 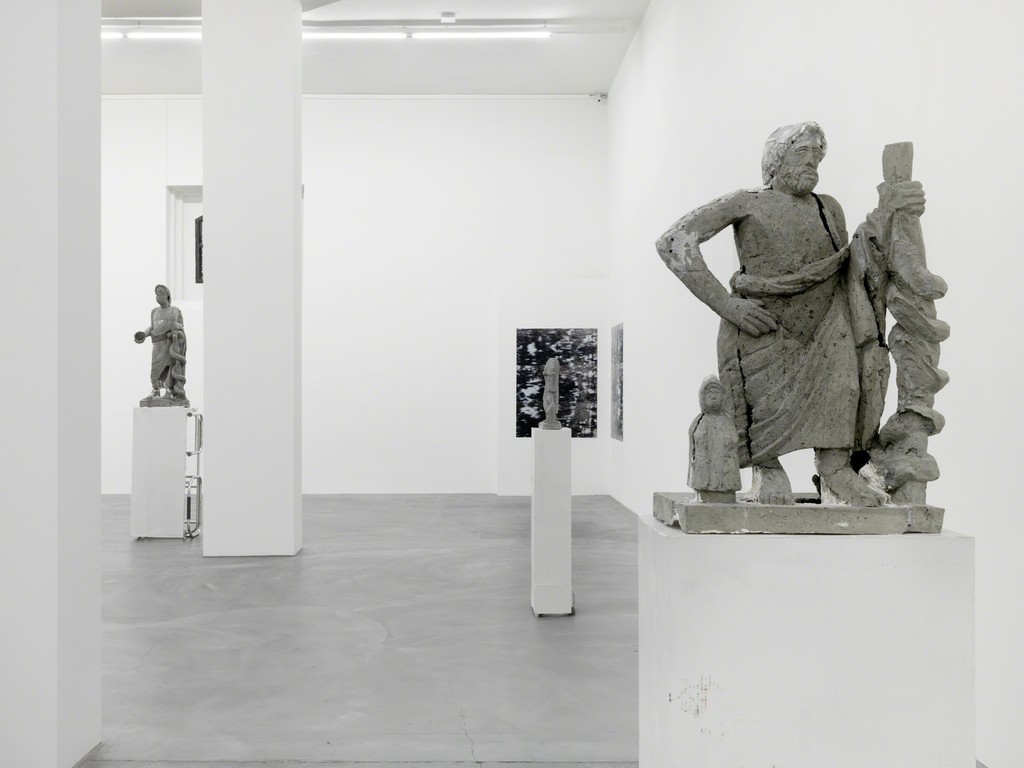 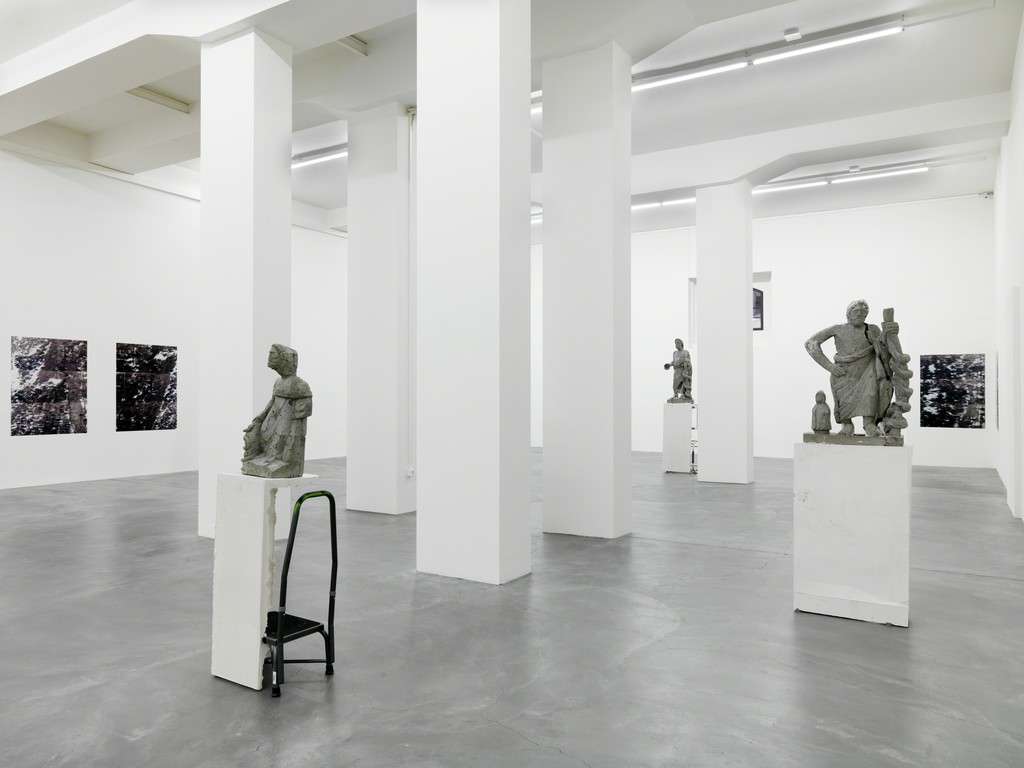 Galerie Eva Presenhuber is pleased to present “the quiescene of the inorganic world“, the gallery’s first solo-exhibition with the New York-based artist Justin Matherly.

Justin Matherly’s large-scale sculptures often either refer to Greek or Roman antiquity or remain completely abstract. In the current exhibition, Matherly presents a series of new figurative sculptures that refer to common representations of the ancient god of medicine, Asclepius, and his son, Telesphoros. Cast in concrete and modified gypsum, Matherly’s rock-like, archaic figures differ radically from ancient statues and their usual copies, made of fine gypsum and marble. Nonetheless, Matherly chose models that can be identified easily by the spectator: Asclepius with his serpent-entwined staff and his son Telesphoros by his side, who symbolizes recovery, and who is represented as a very small man dressed in a hooded cape.
Each sculpture stands on a base made from ambulatory walkers and cast boxes that the ambulatory materials came in. The sizes and shapes of the bases are, therefore, pre-determined and depending on the angle from which they are viewed, they interact with the rectangular columns in the gallery. Thereby, the bases change their function from raising and asserting the gods to supporting them, giving the impression that they couldn't walk or stand without help.

The sculptures are accompanied by hand printed photographs which appear to be abstract but show a very concrete view of a landscape: They were taken at the pyramidal rock at Lake Silvaplana in Switzerland where, one day in August 1881, Friedrich Nietzsche conceptualized his idea of eternal recurrence. Nietzsche introduces his note to the realization with the greatest weight that lies upon each of our actions, however small they may be, given the presupposition that every moment of our life starts anew eternally. From this, Nietzsche derives two possible reactions: To literally get depressed by the weight lying on us, or to fully affirm the divine idea of eternal recurrence. For Matherly, the two figures of Asklepios and Telesphoros symbolize this movement: From depression to affirmation – a turn that Nietzsche leaves for the prophet Zarathustra to fulfill in his later work.

Another notion that underlies Matherly’s works in “the quiescene of the inorganic world“ is that of the Ouroboros: The mystical snake that eats it’s own tail and thus is a symbol for and at the same time a figure of the total affirmation of eternal recurrence. As a newer version of this idea, Matherly identifies the protagonist of the Italian horror movie “Antropophagus“ (1980). At the beginning of the movie, this figure terrorizes a group of tourists with cannibalism; at the end of the film, he moves on to eating his own guts.
Thus, the gods Asklepios and Telesphoros appear in Matherly’s works as mute prozelytizers of the idea of eternal recurrence, which they in turn embody through their qualities of healing and recovery. Considering that Asklepios, at the end of his days, moved from healing people to bringing dead people back to life – for which he was sentenced to death by Zeus –, they both symbolize the idea of art as an emancipatory act. As rock-like sculptures – parts of the inorganic world – that are assertive and yet, through their ambulatory support and their insufficiencies, appear fragile at the same time, Matherly’s figures seem to have escaped from the circle of eternal recurrence. In their quiet corporeality, they invite their viewers to contemplate over illness, health, healing, recovery and recurrence.