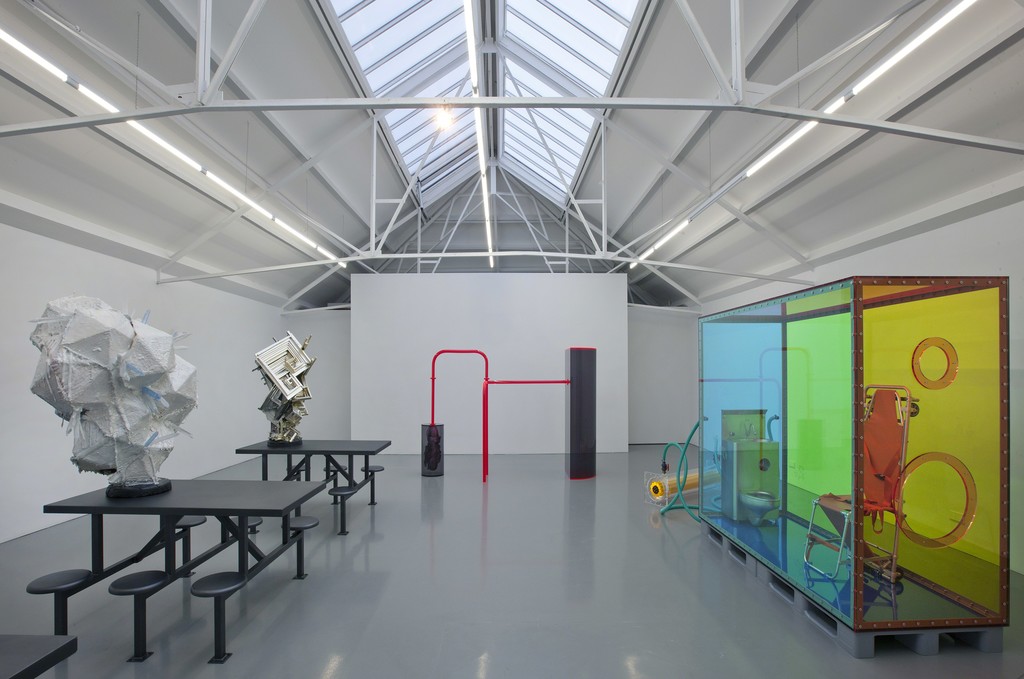 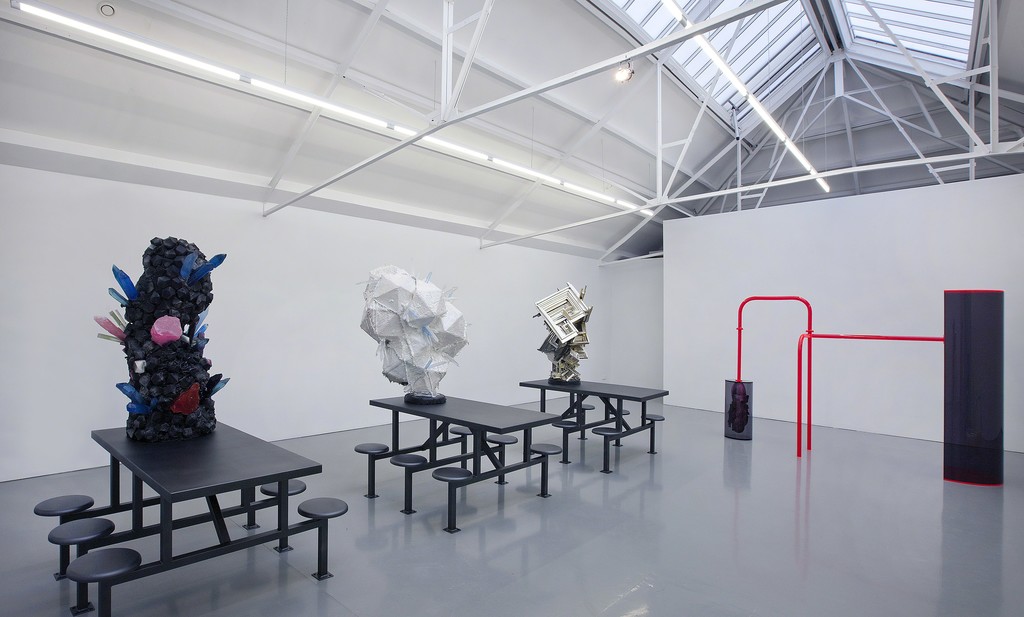 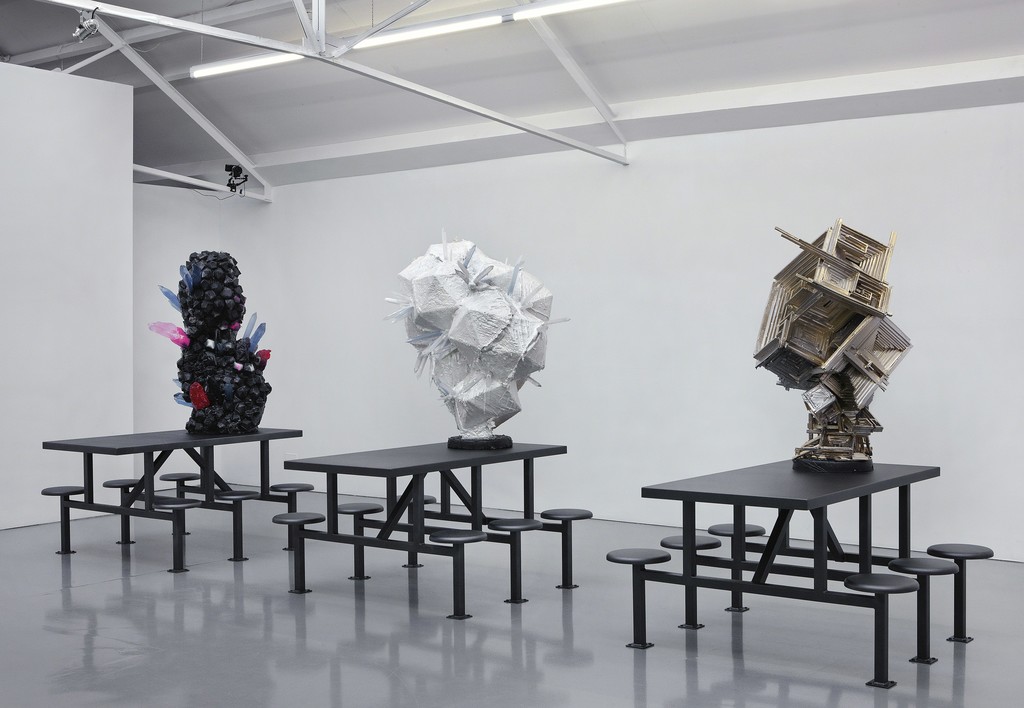 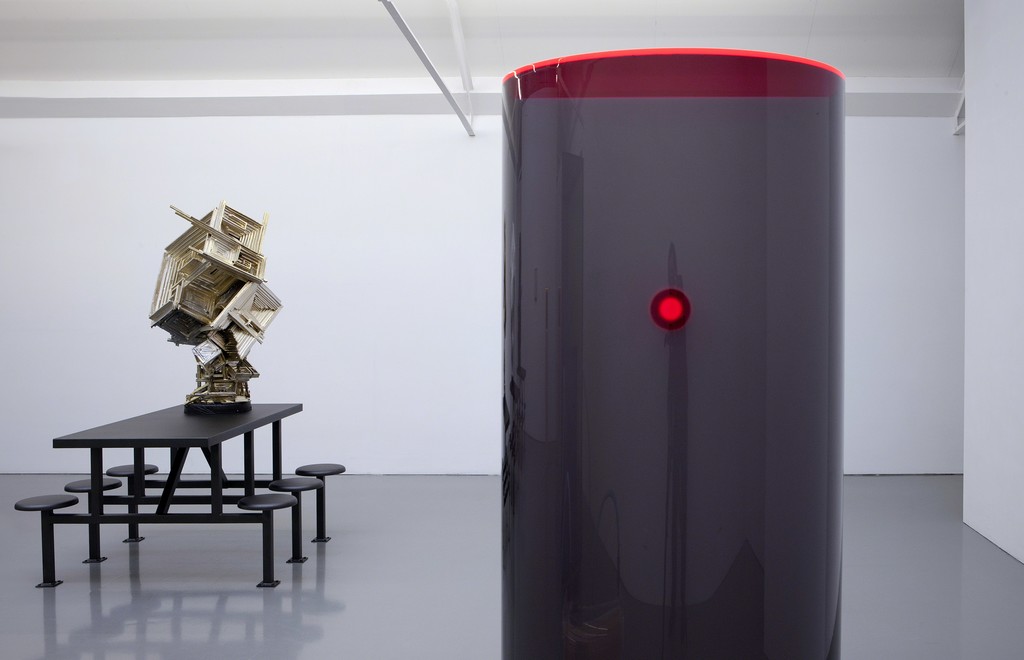 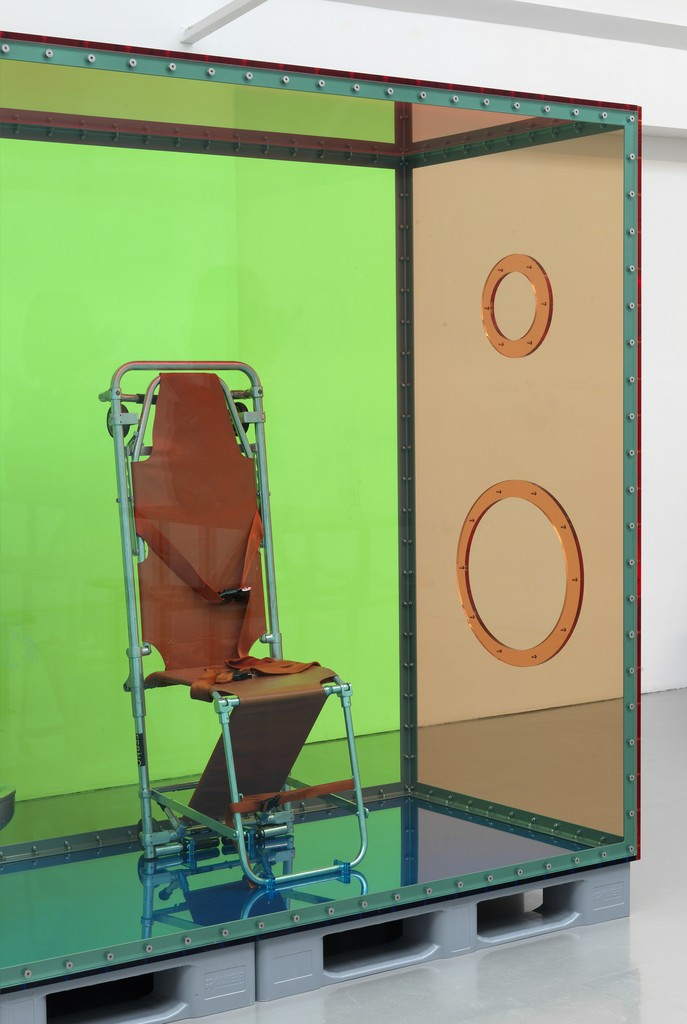 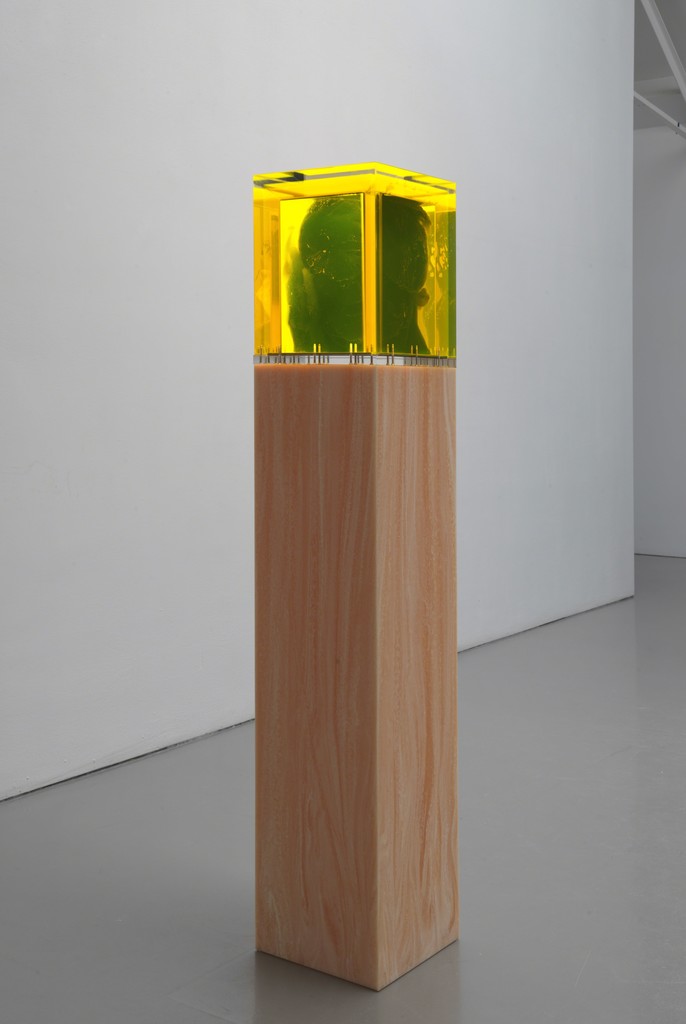 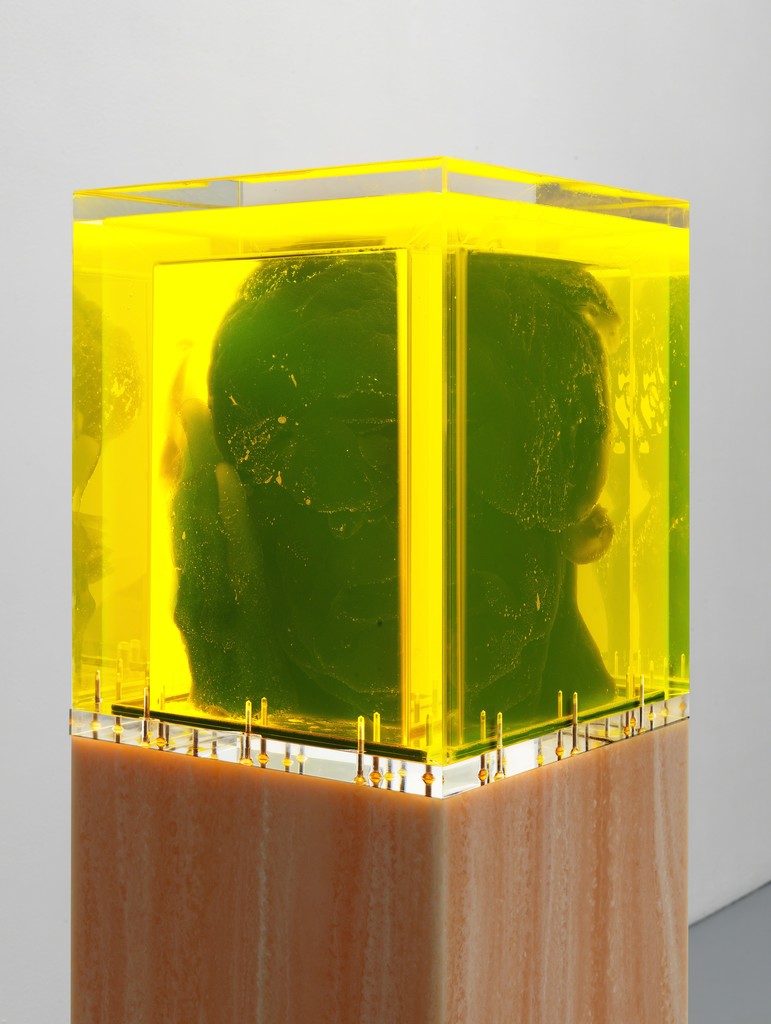 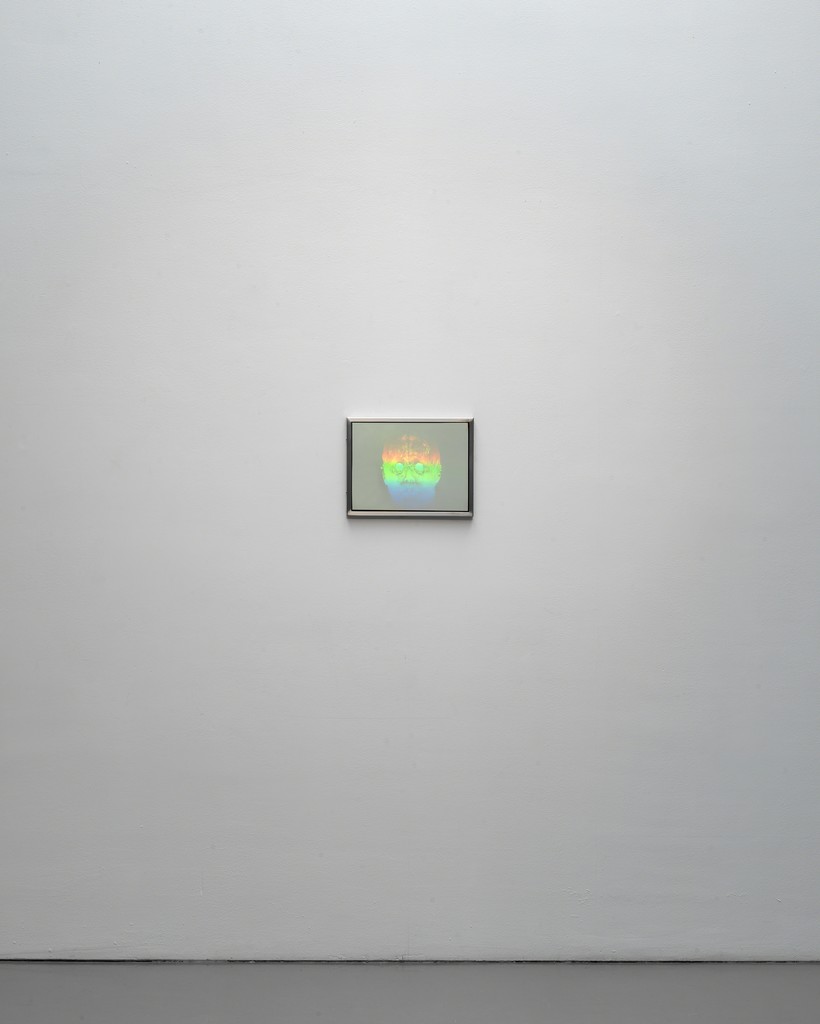 Folkert de Jong’s expressive sculptures arise from a strong fascination for the psychological and bodily human condition. As the title of the exhibition already indicates, this time De Jong focuses specifically on elements of justice; from the hierarchical design of courtrooms, to the psychological manipulation of juries, the theatricality surrounding a judgement and the following isolation.

But who is summoned to court? And who is to judge? Folkert de Jong’s “Court of Justice” is a peculiar fusion of courtroom and prison; a space in between, primarily resembling a scientific laboratory.

De Jong is known for his idiosyncratic use of insulation materials such as polyurethane and Styrofoam. Recently, he has broadened his material palette. For instance with transparent Plexiglas vitrines, enclosing foam assemblages of body parts and objects, as if preserved in formaldehyde. Although the psychedelic, brightly coloured plastic seems to radiate light; it also hermetically seals off its contents and filters reality. Within these see-through walls, a transcendental experience might take place. While De Jong’s ‘reservoirs’ emphasise this theatrical effect of museum displays and refer to art historical uses of the vitrine, by the surrealists for instance, they also visualise a contemporary urge to conservation and immortality.

De Jong even takes it one step further. Central piece in the gallery space is a large Perspex isolation cell, wherein readymade objects have been placed, clearly hinting at Marcel Duchamp. A toilet of stainless steel from a prison cell and a bright orange surgical stretcher chair create a strange and estranging setting together. While the surrounding acrylic glass generates distance, time markers and cries, carved from the inside, reveal someone’s previous confinement. Here the eccentric, grotesque character of De Jong’s earlier work has been replaced by a clinical feeling of oppression. How long did time stand still in here? Via a long tube, the cell connects with an adjacent chemical test display, where energy seems to bubble. As in a time machine, there is an alluring, hopeful opening for escape – a potential teleportation.

Next to the constellation of different Perspex vitrines, De Jong shows three long, metal tables, each with six stools directly attached to them. Designed in such a way that there is not a single loose element encouraging violent use, these reproductions of prison dining tables also contain the anonymity of penitentiaries. The identical stools remain unoccupied; the table tops surprisingly function as plinths for three crystal-sculptures, self-consciously displaying themselves. Colourful Bismuth for instance, that spirals down in endless, rectangular passages. What do these gemstones, sparkling yet sharp, embody? Their healing powers are in flat contradiction to the toxic and non-decomposable synthetic materials from which the artist has made them. While De Jong has represented immoral human behaviour in previous works, he now questions the morality of things themselves. Can an object be intrinsically good or bad? Could an item be put to trial?

Except for a hologram self-portrait of the artist created from MRI data, the human figure has disappeared for the first time in De Jong’s “Court of Justice”. Now, more than ever, it is up to the visitor to judge.