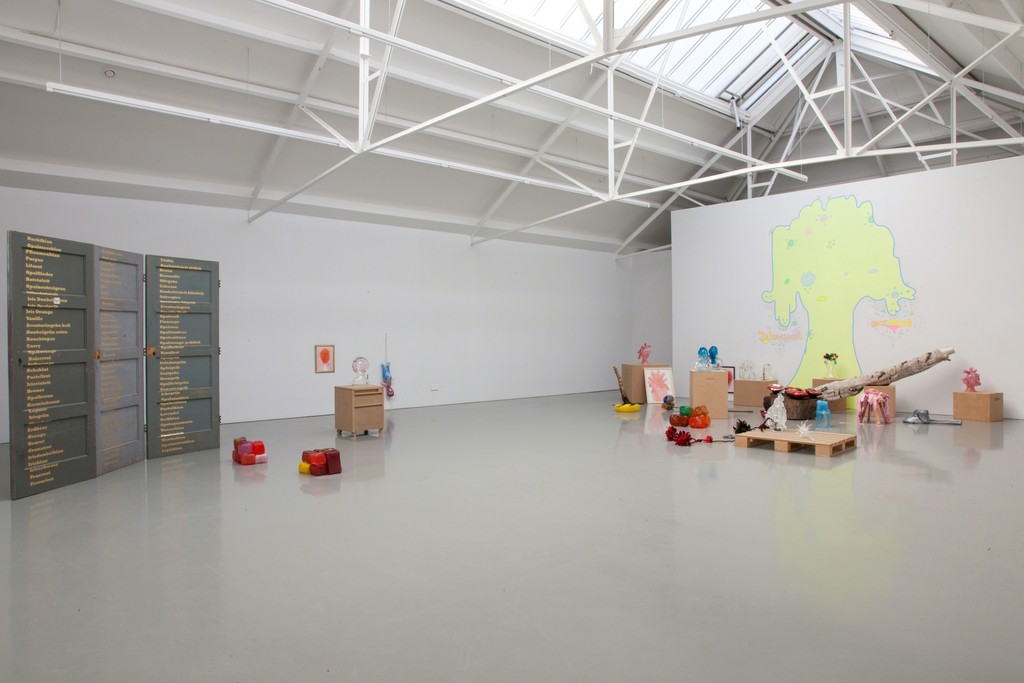 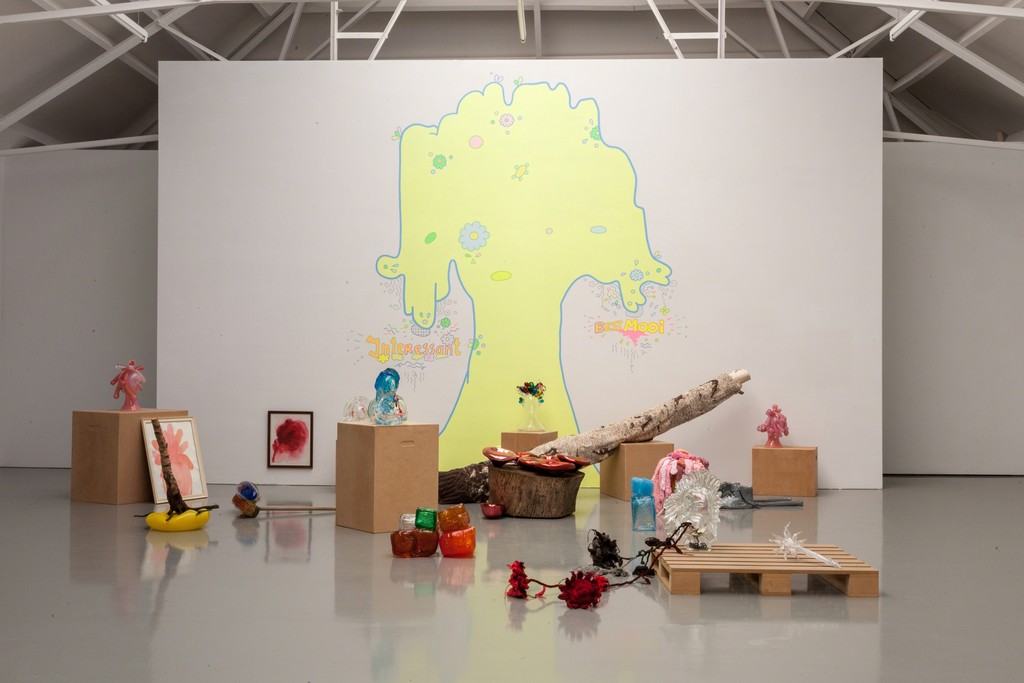 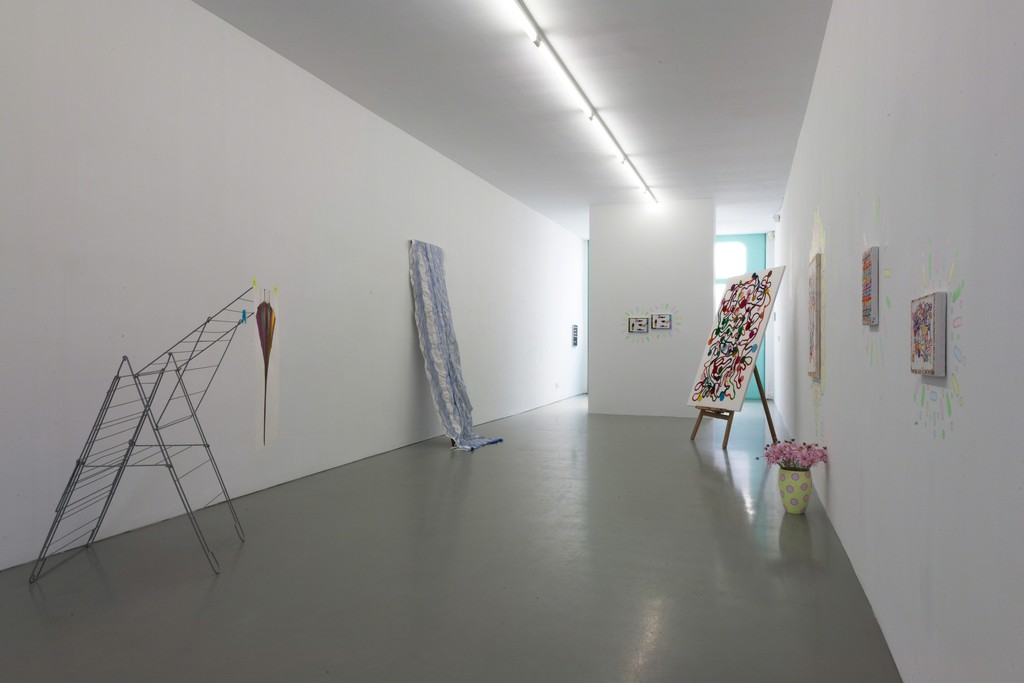 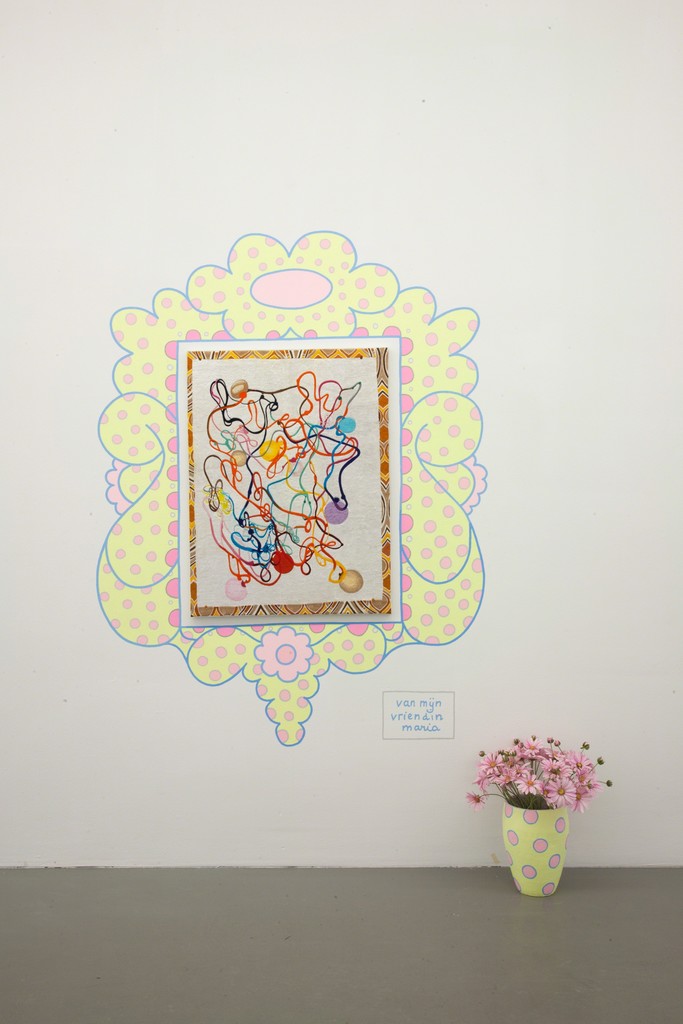 Girlish pastels, sensual pink and fleshy colours; round, bulging, flowing, soft shapes. Lily and Maria share a certain power of seduction. One that initially seems naive, directly communicating its language and forms, but, in its shamelessness, appears disarmingly open and layered, at times even slightly vicious. Both artists play with deep-seated preconceptions of – and associations with – femininity . The murals of Lily with their cheerful, light-hearted , sweet lyrics and unashamed decorative patterns. The glass sculptures and embroideries of Maria directly referring to fertility forms and crafts.

For the exhibition ‘Best mooi’ Roosen and Van der Stokker bring both their practices together. Twisting, light blue contours delineate a vertical, pastel yellow mural on the back wall of the gallery. With her typical handwriting, Van der Stokker painted her cartoonish text clouds, decorated with twists, flowers and rays. The mural is designed as a decorative, direct background for a constellation of sculptures by Roosen: a knitted stool of pink pricks; a tree with bright, reflective red mushrooms on it; a pile of brightly colored glass stones.

In front of the mural of Van der Stokker is a series of glass self-portraits by Roosen. This is a literal, material translation of the type page of her book 'Monsters' from 2009, where a watercolor self-portrait was combined with her glass sculptures on each page. These now serve as miniature decorations on the watercolors which are executed in glass; in this way, the bunch of hanging chestberries (from 2009) forms an earring, and ‘Jean, Pierre and Claude’ (the glass pricks from 2004) become locks of hair hanging in front of eyes. As the flow of watercolour paint has always been at the base of Roosen’s blown objects, a doubling now takes place, where the new self-portraits in glass also create a summary of her oeuvre as a practice over time.

This exhibition shows the work of Roosen and Van der Stokker together in an unorthodox proximity, they communicate from a directness that, however, never translates into simplicity, neither is easily described as decorative or feminine. In all their immediacy they even expose a subtle aggressiveness.