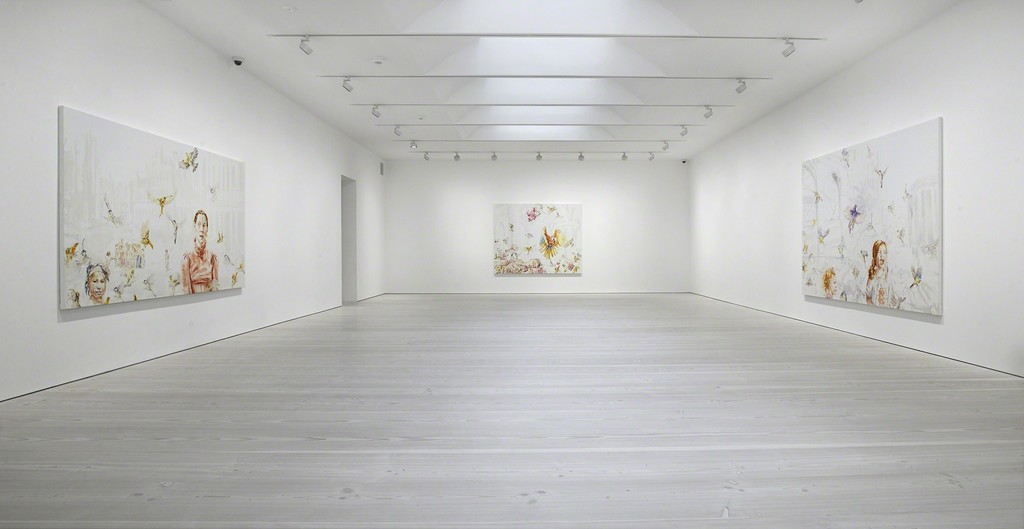 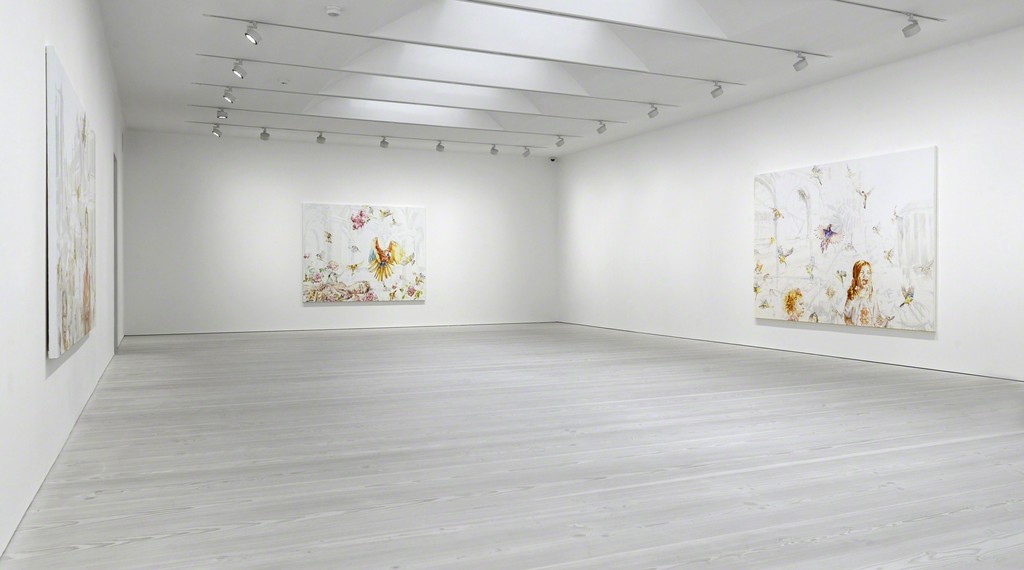 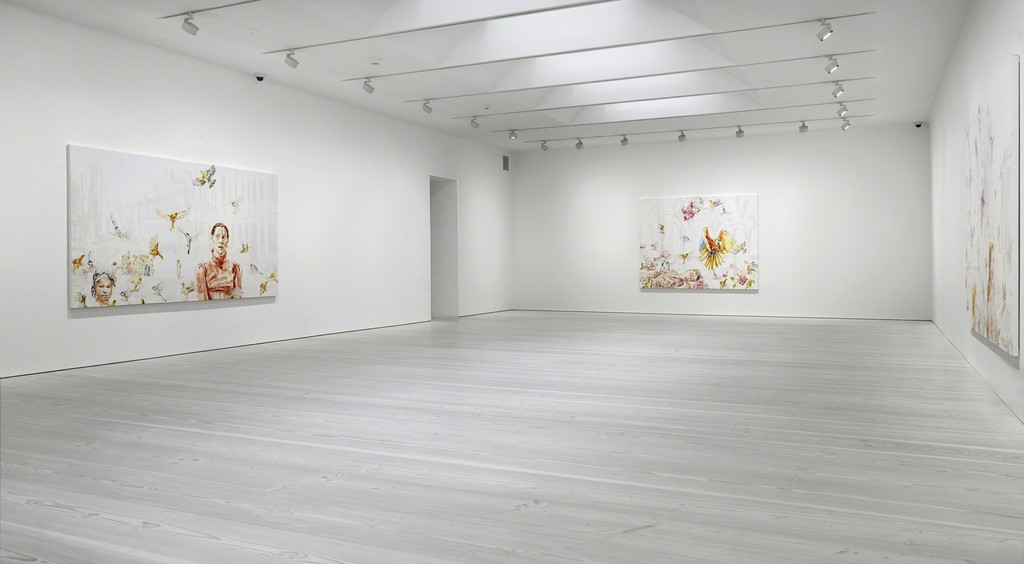 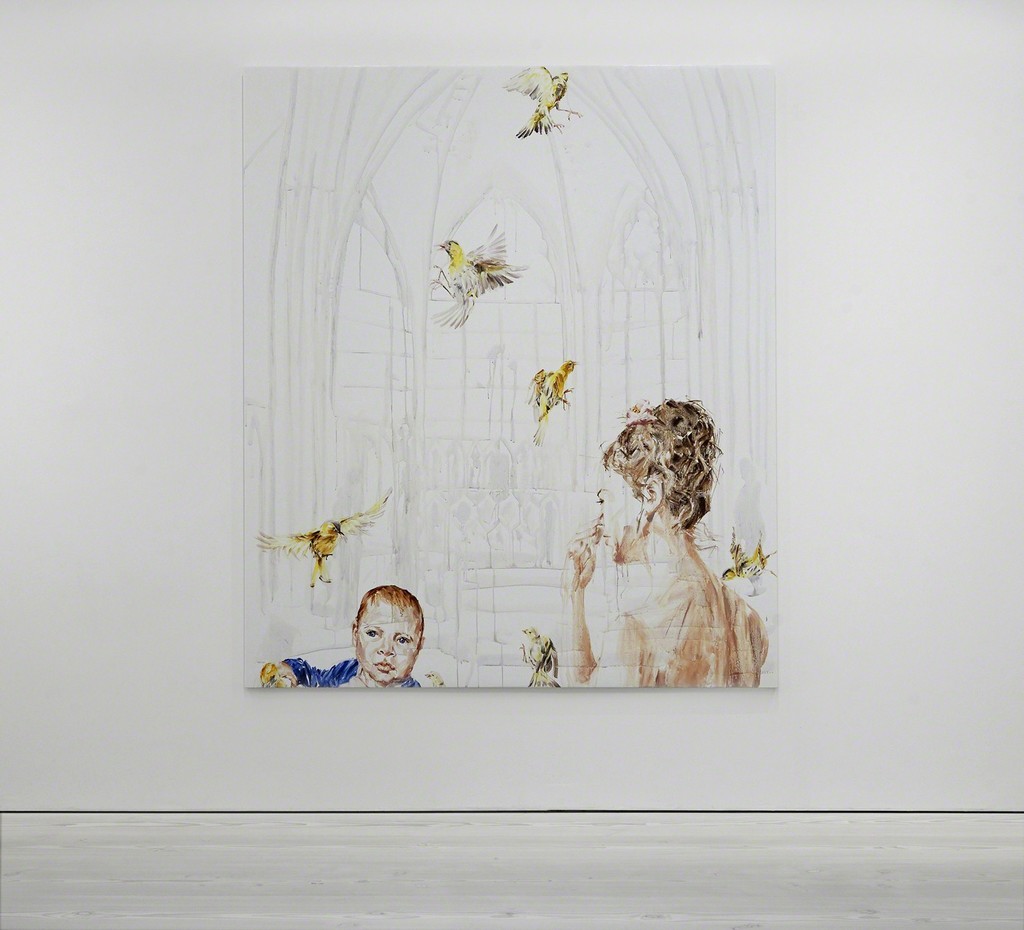 Linn Fernström: The Air Behind Your Back
Galerie Forsblom Stockholm
August 24–September 23, 2018

Linn Fernström has a distinctive way of painting that is unique and recognizable: her paintings are figurative and with detailed rendering of color. The exhibition at Galerie Forsblom focuses on her powerful paintings in a series of new, large-scale works. The paintings are calmer than her previous works, as the dramatic meets poetry and tranquility. Fernström renders an imaginary world that is depicted with a tangible presence.

The ruins in the background of the paintings lend depth to the images and are reminiscent of stage sets or backdrops. They hint at a world in disrepair, the past, or a dream scenario. Spatiality dissolves, while the ruins frame the narrative. Colorful birds and dragonflies vibrate in the air, creating a sense of space in the paintings. Fernström uses a different perspective in which the main characters, occasionally just a torso or head, are on their way in or out of the image, and in which the horizon has shifted or disappeared.

Reflections of the artist herself recur in Fernström’s work, as well as insects and animals portrayed with the same gravity as the people. A woman lying on the ground in one painting also appears in another artwork. Is she asleep or is she dead? The landscapes and figures are transferred without explanation, like the logic of a dream. Composition, color and form carry the narrative that eventually conclude with the viewer.

Fernström (b. 1974) studied at the Royal Institute of Art in Stockholm and has had numerous solo exhibitions in Sweden and Finland throughout her prominent career. She has also participated in group shows in, Switzerland, Italy and China, among other places. Fernström’s work is represented in prestigious collections, including Moderna Museet in Stockholm, Malmö Art Museum, Östergötlands Museum and Bonniers Konsthall in Sweden, as well as in private collections. 'The Air Behind Your Back' is Fernström’s first major exhibition in Sweden since she moved back to Stockholm after being based in New York for many years.