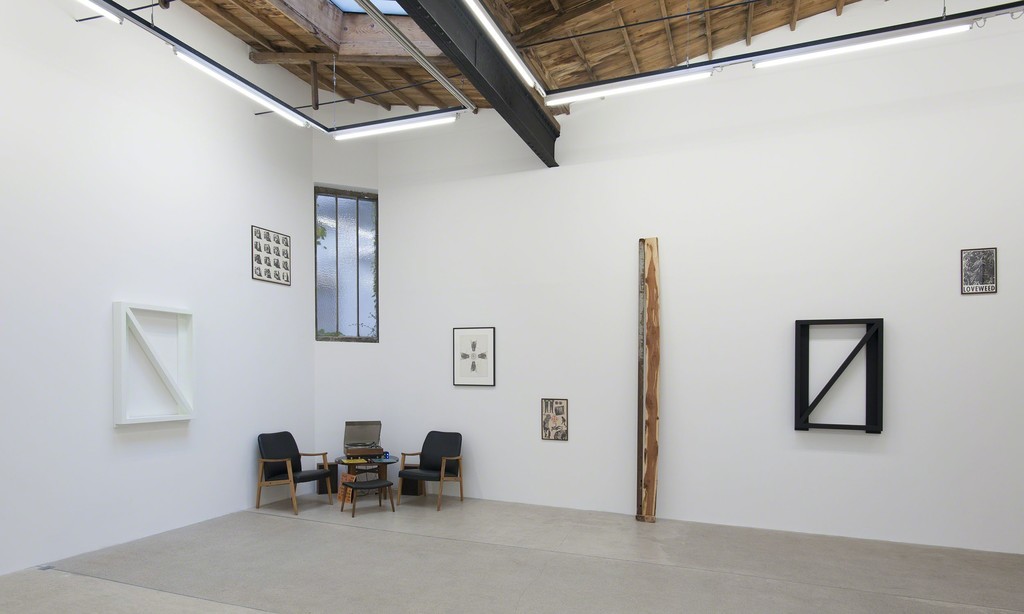 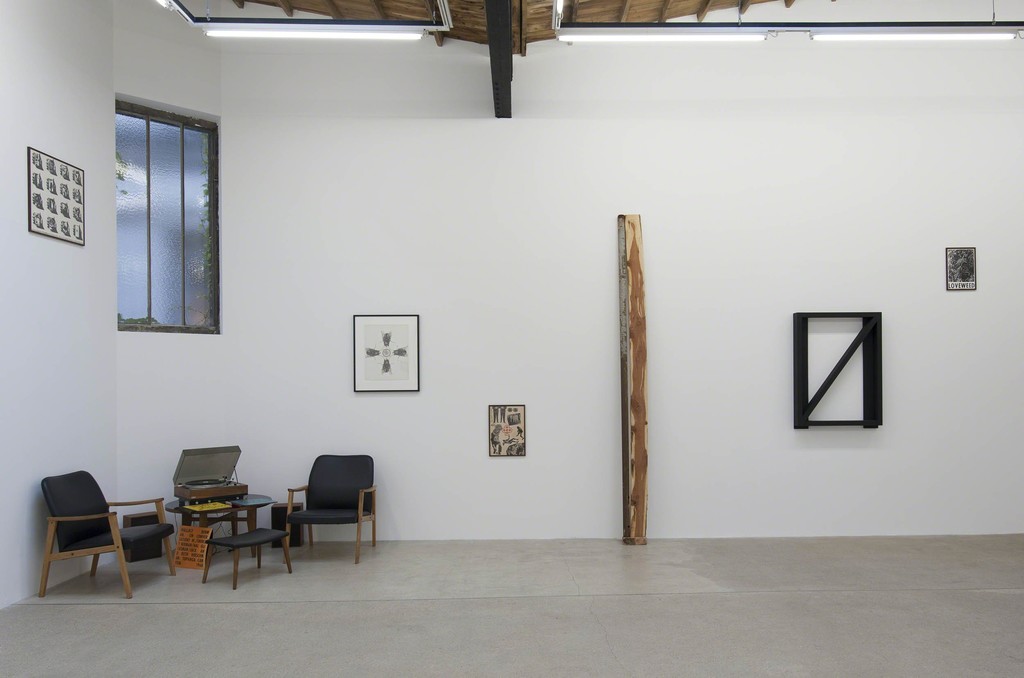 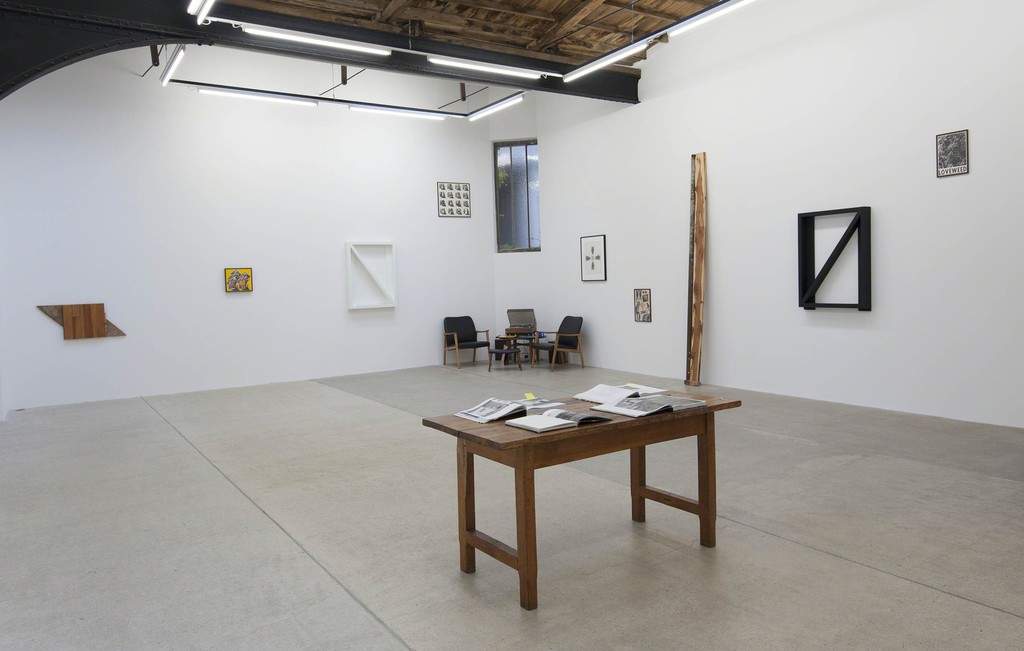 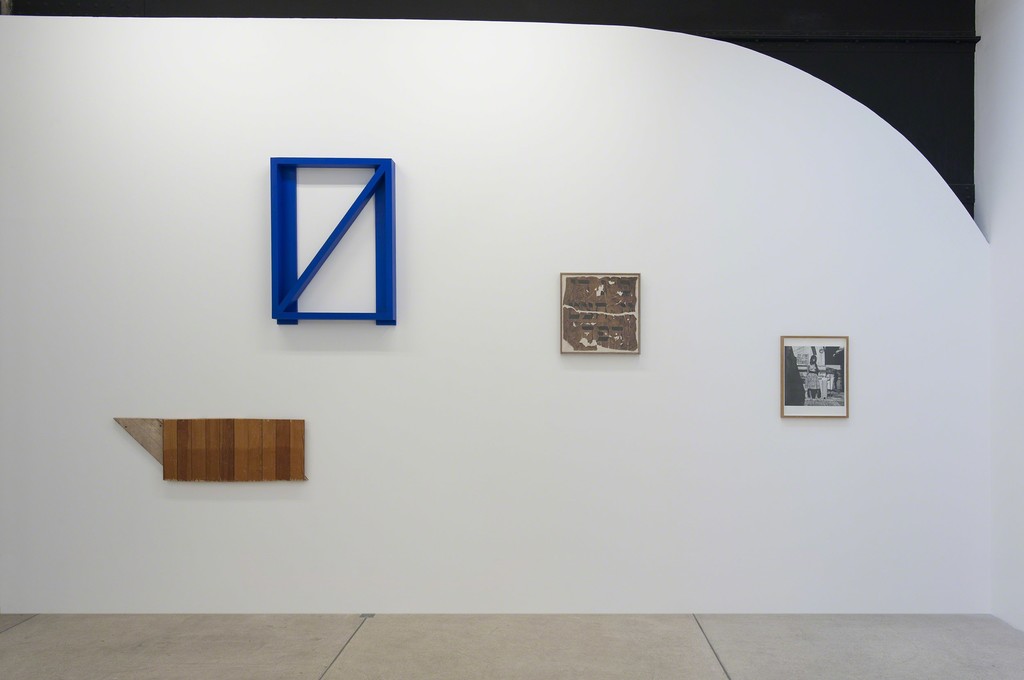 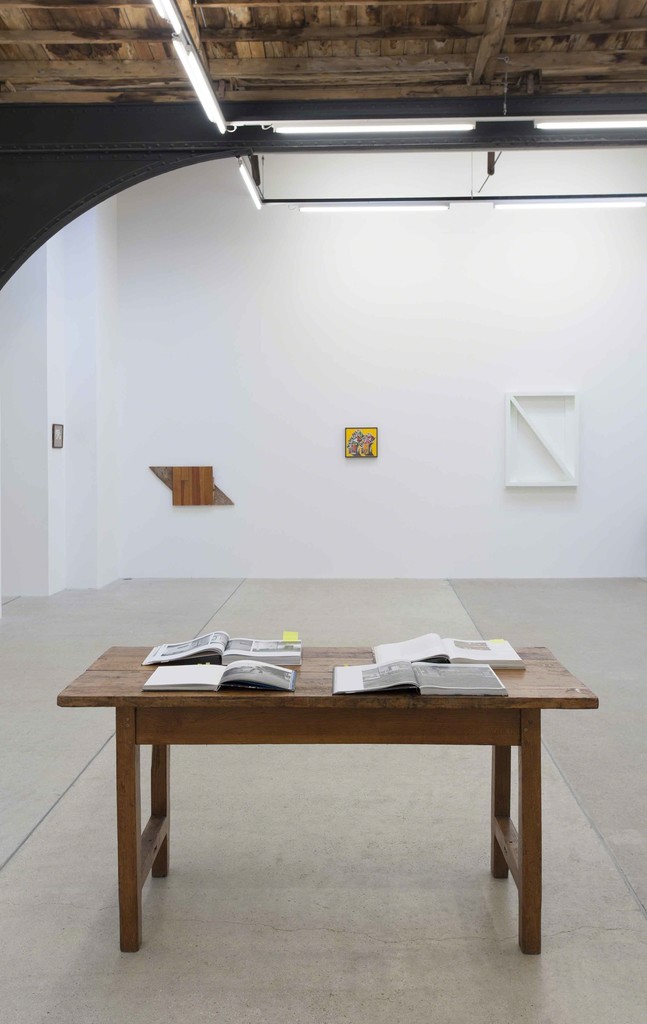 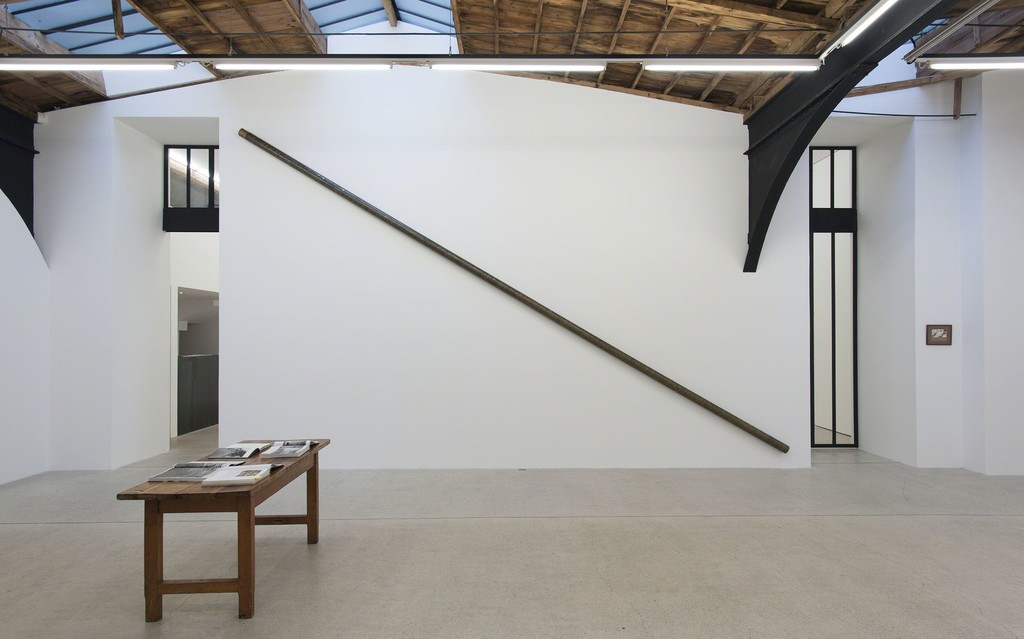 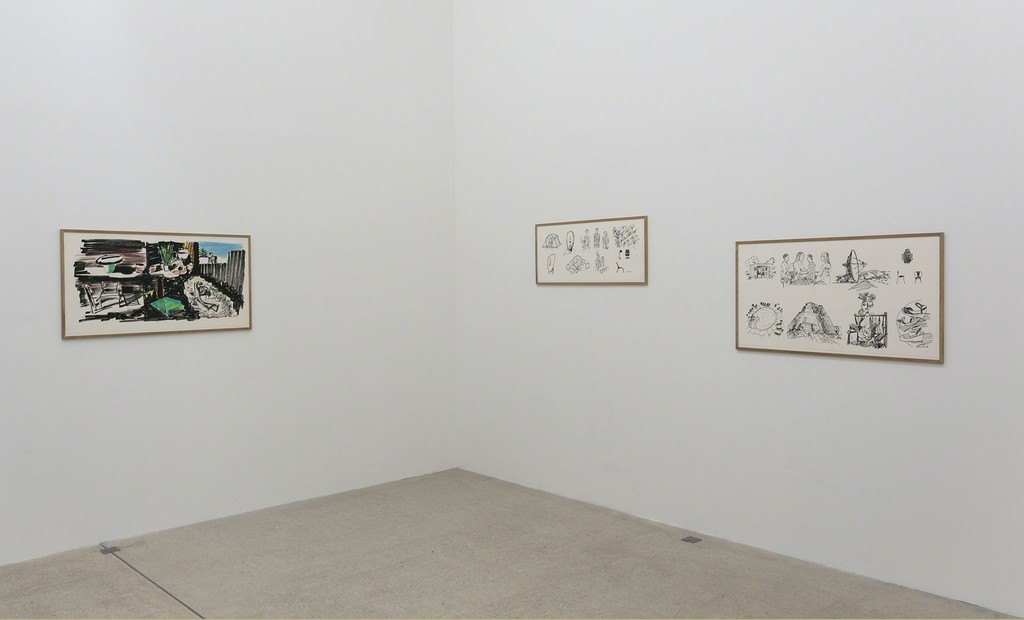 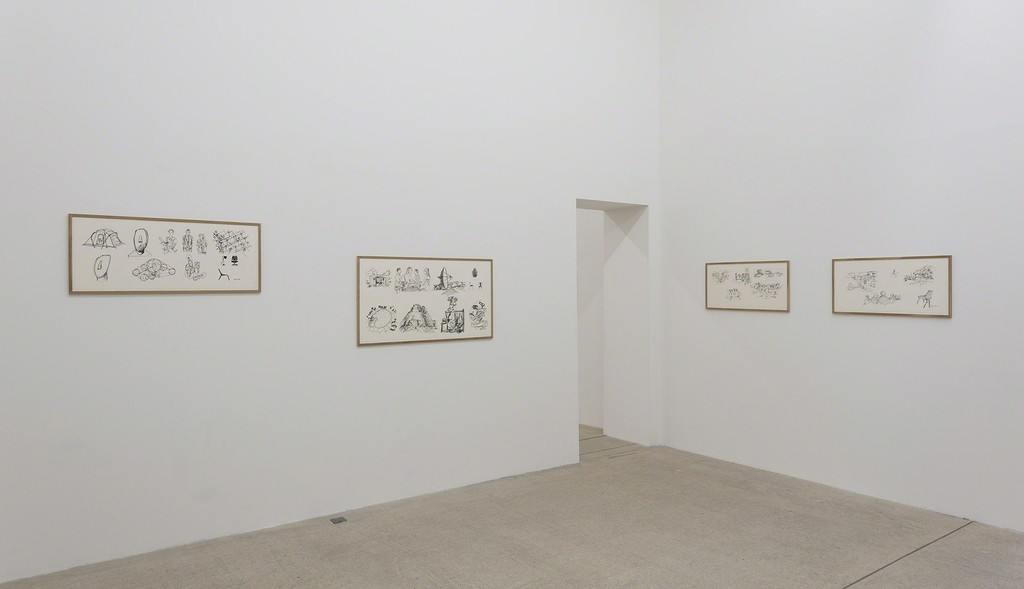 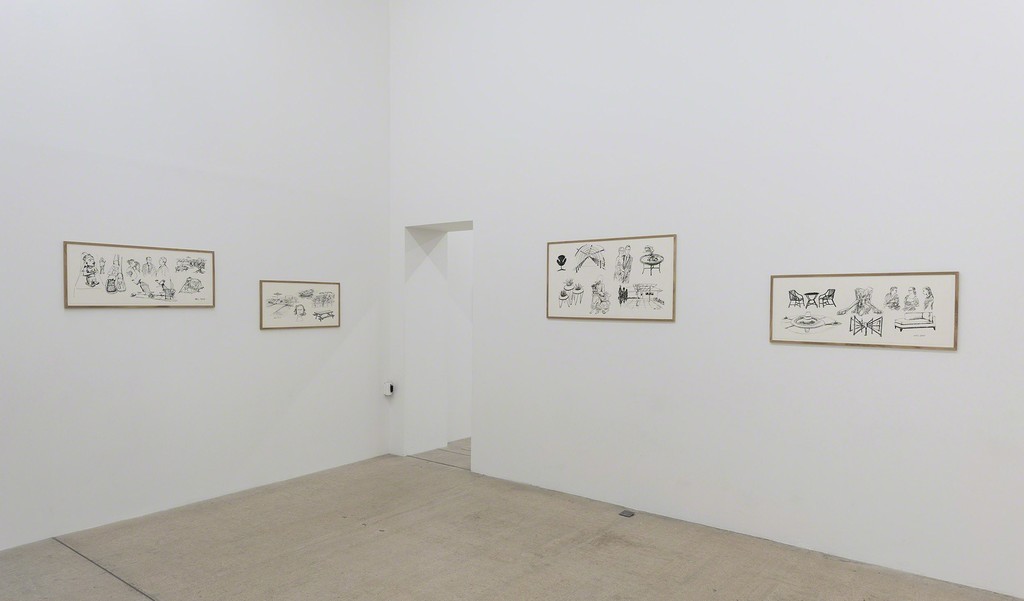 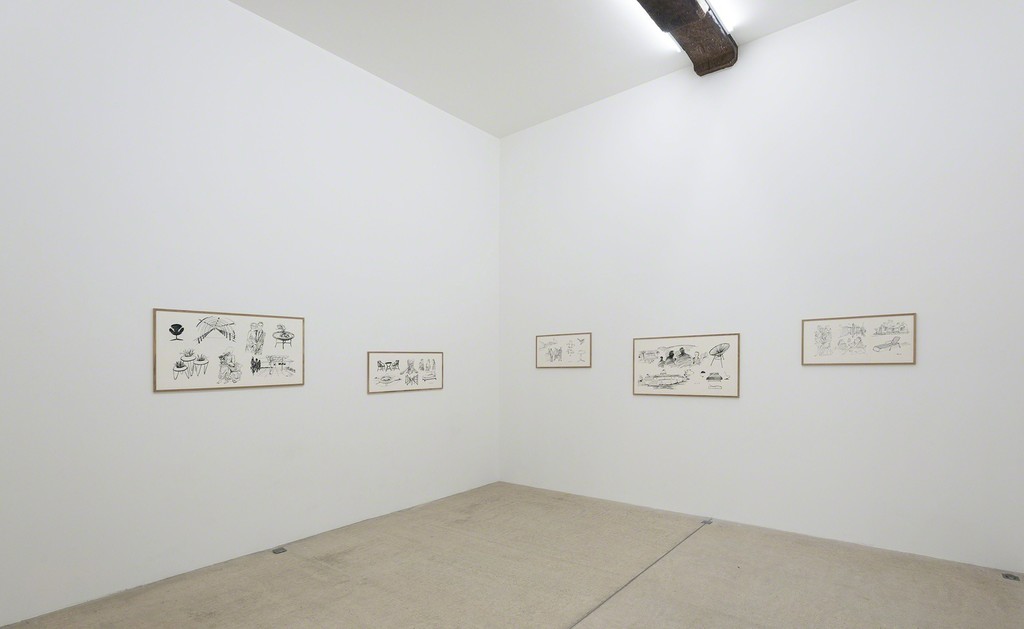 Lost in the Flood :

In 1964, Wallace Berman's wooden house on Crater Lane in Los Angeles was devastated by a mudslide that destroyed everything on its path. The house on Crater Lane was an emblematic place for the Californian Beat scene where Berman organized exhibitions, conferences and poem readings.
This group show is built around Crater Lane as an iconic venue. The works by Wallace Berman, central historical figure of this show, will dialogue with Virginia Overton’s and Will Boone’s.
A soundtrack, a taped discussion in which resounds the voice of Wallace Berman, accompanies the exhibition. The artist, who always refused to be interviewed, is recorded without knowing it by his friend Hal Glicksman in the Berman’s family home in Topanga Cayon, where they relocated after the destruction of their home on Crater Lane.
Wallace Berman (1926-1976) was an iconic figure of the California Beat movement. His personality and multifaceted body of work deeply influenced several generations of artists, like the one of Will Boone and Virginia Overton. His practice resonates with jazz, the Kabbalah, and poetry that accompanied and inspired his work.
The works of Virginia Overtone (born 1971), in fragmented materials, recall the destruction of Berman’s wooden house. The idea of the transformation of architectural space is essential to Virginia Overton’s work. More commonly associated with architecture, construction work or farming, materials such as wood, metal, plexiglas and fluorescent lighting are cut, bent and hammered into works that evince the power and sensory quality of their own materials. “I like for the work to act as a marker of its own history – letting accrued defects show in the pieces – that talks about the ways in which the materials have been used”.
Will Boone’s (born 1982) work in the exhibition is inspired by an object found in his studio — a wooden brace discovered within his wall. It appears to be an unfinished X — a composition in his painting and a recurring motif in his work—a shape, which holds itself up with, perceived tension. The form was a piece of the wall’s structure, hidden by the drywalled surface. It’s shape recalls a pair of swinging gates at his grandparent’s ranch in Cotulla, Texas as well as a job he had worked in construction, studding out walls. Boone has replicated the structure in simple wood and joinery and coated the surface in paint, transforming the found form into a 3- dimensional monochrome.
Soundtrack: Wallace Berman. (In conversation) w. /Shirley Berman /Hal Glicksman /Jack and Ruth Hirschman. Topanga Cayon. 1968 - Edition Muta and Derringer Books.
Lost in the Flood is a song by Bruce Springsteen released in 1973 on his debut album " Greetings from Asbury Park, N.J. "

At galerie frank elbaz opening 22 October, William Leavitt presents 14 new black ink drawings on paper of objects, scenes, and structures in combination. Each work includes a group of people in conversation, and the things seen are meant to be what is in their thoughts or words. Leavitt states “I've been in the past interested in the impossibility of representing what occurs in the ‘mind's eye’. Thus the objects here reflect tangentially what the figures in the drawings might be picturing. I also admit to being fascinated by the plethora of consumer objects, buildings and travel destinations in our world.” Leavitt's drawing style is loose and illustrative, and meant to call attention to the physical action of the drawing process.
The show's title, The Multiplicity, is partly in response to software engineer Ray Kurzweil's thesis that computers at some point in the future will surpass humans in their intelligence. This occurrence he calls the 'Singularity'. “Though a computer can store data, generate responses to stimuli, and perhaps even create, it cannot emotionally appreciate what it does.”
William Leavitt, born 1941, lives and works in Los Angeles. His work includes drawing, painting and installations.
He recently had solo exhibitions at Institute of the History and Theory of Architecture, ETH, Zurich (2014); Greene Naftali Gallery, New York (2013); Margo Leavin Gallery, Los Angeles (2012); Museum of Contemporary Art, Los Angeles (2011); Jancar Jones Gallery, San Francisco (2010); and LAXART, Los Angeles (2009).
His work is in the collections of Boijmans van Beuningen Museum, Rotterdam; Hammer Museum, UCLA, Los Angeles; Los Angeles County Museum of Art; The Museum of Contemporary Art, Los Angeles; The Museum of Modern Art, New York; Orange County Museum of Art, Newport Beach, CA; San Diego Museum of Contemporary Art, La Jolla, CA; and Stedelijk Museum, Amsterdam.