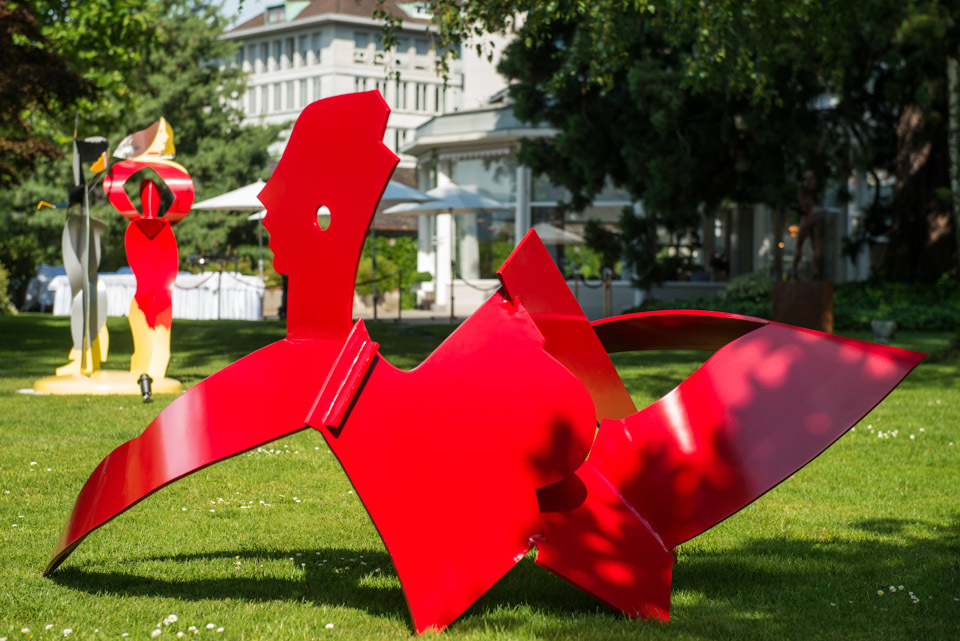 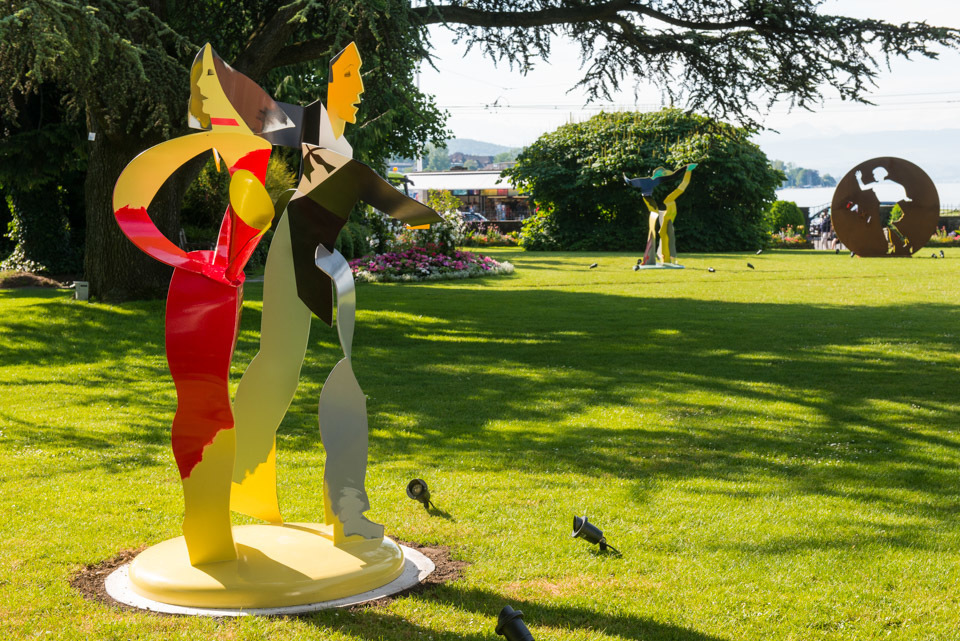 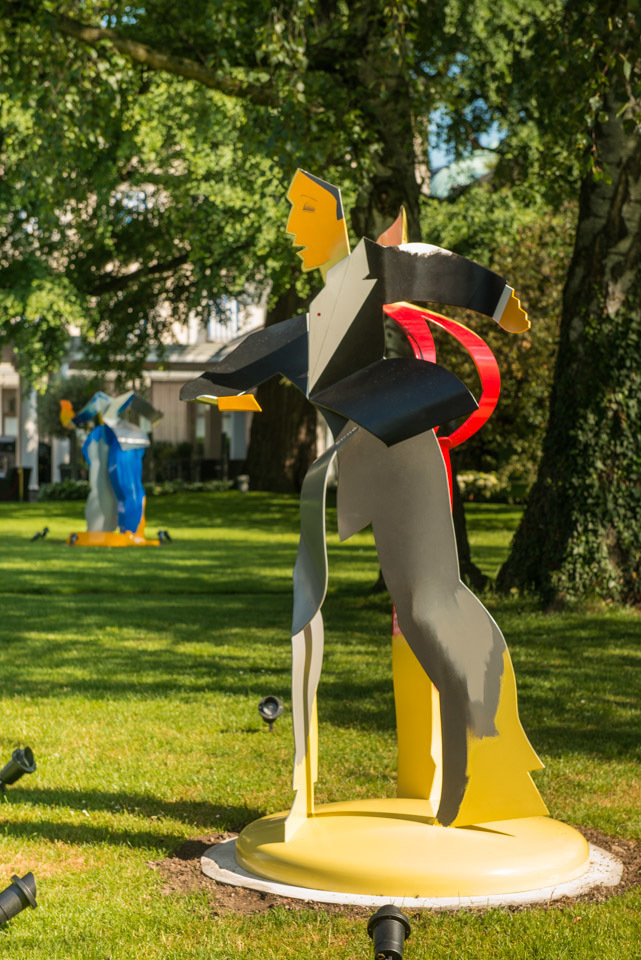 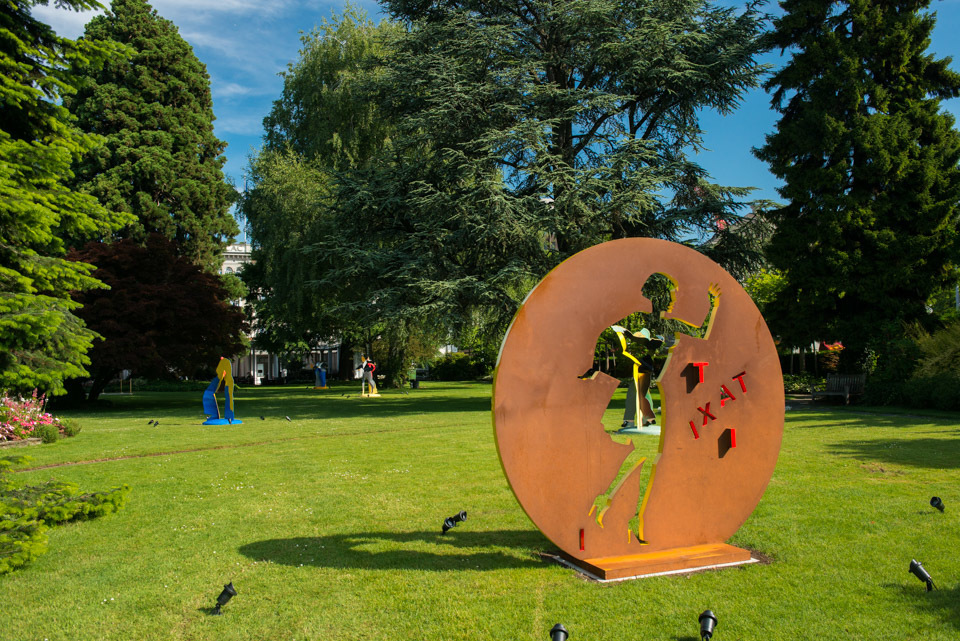 Galerie Gmurzynska is pleased to once again stage the annual outdoors exhibition project Art in the Park on the scenic premises of the Baur au Lac.

This year’s edition will present INSIDE OUT, a solo showcase of sculptures by British artist Allen Jones.

Allen Jones, born in 1937, established his international reputation as one of the pioneers of British Pop Art in the early 1960s through his paintings and lithographs, but since the middle of that decade he has also explored sculpture with increasing intensity. Much of his most ambitious work since the early 1980s, and certainly some of the largest in scale, has been in three dimensions, and it is this aspect of his work – as always focussed on the representation of the human figure – that is the subject of an exhibition that will take place largely en plein air in the gardens of the Baur au Lac on Lake Zurich. In 2010 and 2011 Jones’s sculpture was included in group shows in these same gardens of the hotel first opened to the public in 1844; this will be the first time that the entire exhibition has been devoted to his work alone. As in those cases, not only will the natural setting be animated and reconfigured by the placement of key works; the backdrop against which these sculptures in painted steel and other materials will be seen will undoubtedly allow even those very familiar with the artist’s work to see some of his liveliest and most joyful pieces literally in a fresh light.

Jones’s sculptures often play wittily on the relationship between internal and external form and on the contrast between inside and outside in their eventual display. They have been made for both indoor and outdoor placement, destined for domestic as well as gallery, museum, corporate, commercial and natural settings. The selection of works for this exhibition at the Baur au Lac takes into account not only the need to concentrate on materials that can withstand changes in weather, but also, critically, that thrive on the relationship between the forms to a backdrop of nature and to the play of light on their often brightly-coloured surfaces.

The exhibition will be accompanied by a catalogue with an introduction and extended notes on each of the exhibited works by the British art historian and independent curator Marco Livingstone, who in 1979 both published the first book on Jones’s work and curated his first retrospective of paintings and who since then has written extensively on the artist.

Since 2007 Galerie Gmurzynska has been realizing the site-specific outdoor sculpture project Art in the Park in the sprawling gardens of the Baur au Lac overlooking Lake Zurich. The gallery has exhibited large-scale works by Fernando Botero, Alexander Rodchenko, Joan Miró, Alexander Calder, Rotraut, Robert Indiana and David Smith amongst others. In recent years it further staged a monographic survey of Australian sculptor Robert Klippel and produced the world premiere of the “Venus Project” by Yves Klein in the summer of 2014.