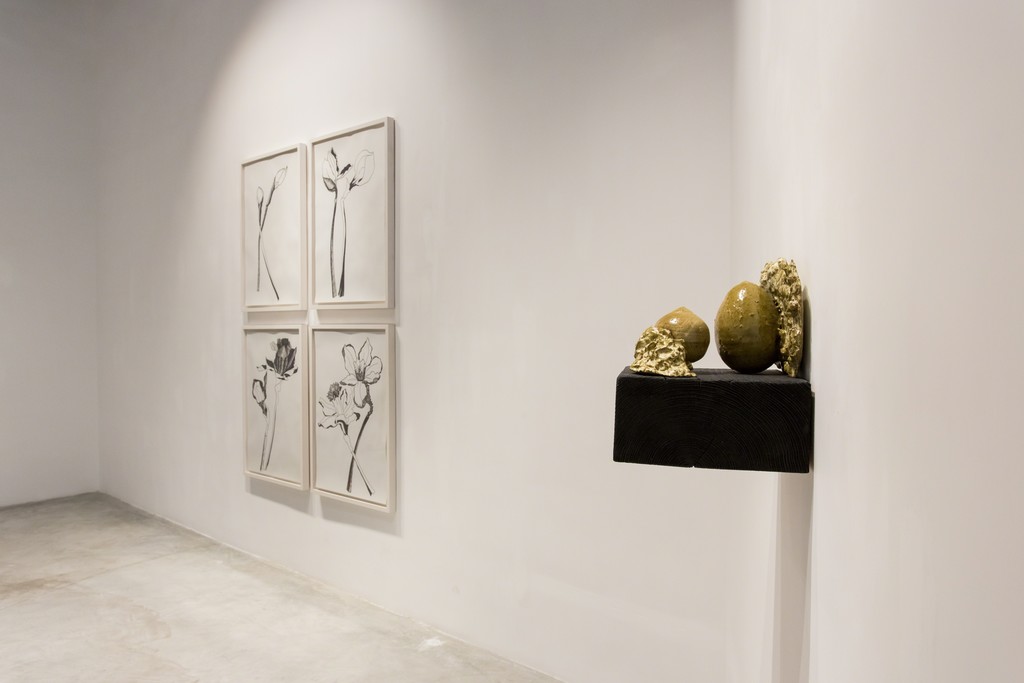 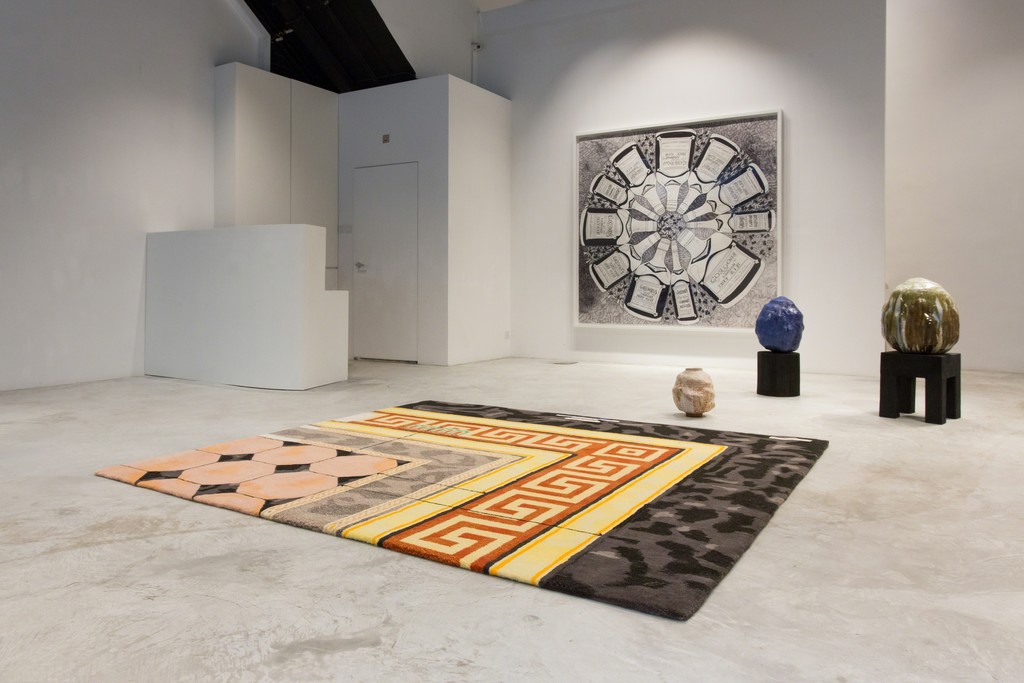 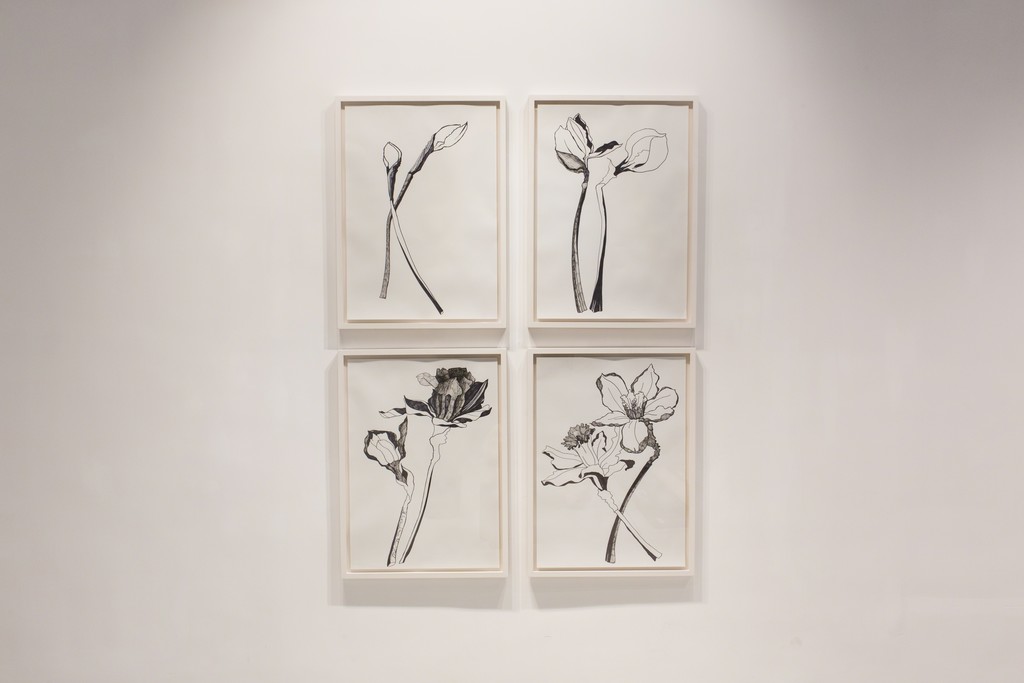 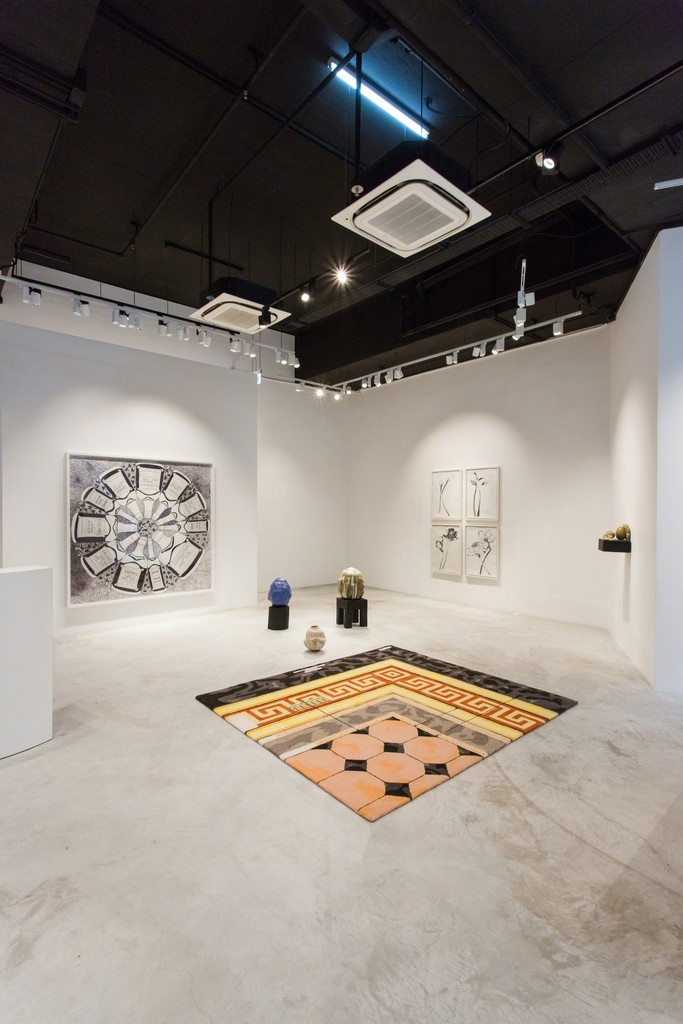 ‘Towards the Interior’ comprises a selection of mixed media sculptures, fibre-tipped pen drawings, and video animation that collectively suggest a living space, and as separate pieces pertain to the psychological quotient occupying a private realm. Placed throughout the gallery, Adam Silverman’s uniquely crafted ceramic sculptures and pots manifest a more visceral interpretation of functioning vessels. The cobalt blue and ochre-stained pieces resemble prehistoric eggs, rocks or boulders, whilst their distinctive molten drip marks and cracks reveal their fabrication. By Silverman’s sleight of hand, alchemy ascends traditional clay to an elevated status of adornment. The ovoids on pedestals may not perform a function, but participate in a new dialogue with the architecture. The artist establishes a contemporary vocabulary that communicates the ornamental and functional. Installed to resemble a sash window on the wall, Aleksandra Mir’s set of four observational drawings depicting flowers in Spring, provide a snapshot of when the artist re-located to London. ‘Moving here after 5 years in Sicily made me look at plant life differently again. The garden flowers seem so shy of the cold they’d rather just stay in their buds.’ The description reveals the artist’s empathetic view of nature and the world outside, whilst the charismatic drawing ‘Gordon’s (Mandala)’ depicting eleven gin bottles in a concentric configuration injects humour and an introspective view into the space. Mir creates alternative narratives and visions of the world by way of the Sharpie pen, a much loved tool designed for everyday use. Compared to graphite and the Rotring pen, it would appear at odds with the demands placed upon it by an artist - however, Mir has pushed its potential to suit her drawing style and it is a strong characteristic forged in the work. Mir’s range varies from the scale of the intimate to larger drawings and grand installations that fill an entire room. She oftentimes, enlists groups from local communities to assist in their completion. The daily physical repetition of applying the same technique engages those who participate, so much so, that their own DNA is imprinted in the work. Mir harnesses these external influences enabling the participants to work as a collective and achieve something as a whole.

Isabel Nolan’s majestically titled ‘A Rug for a National Gallery’ is a wool tufted tapestry that exudes nobility and lineage. The piece is based on an original watercolour design for a large floor tile of the National Gallery- Ireland by the British engineer and architect, Francis Fowke, who also designed both The Royal Albert Hall - London and parts of the Victoria and Albert Museum - London. Nolan has remained faithful to Fowke’s shapes, patterns, colours and tones - however by altering the intended scale of the original, Nolan subverts its purpose and transfers the design from that of a public asset to the realm of the domestic. Here, Nolan, whose multi-faceted practice, employing a wide range of media, is interested in the concept that the floors of galleries are often overlooked, and would like to address this by forcing us to ‘look down and attend to what is at foot rather than eye level’. Zhu Tian’s material often starts with autobiographical leanings, and is presented in multifold media that includes performance. The moving image that plays continuously on a wall mounted flat screen monitor is Zhu’s self-effacing animation ‘Throat’. A simple sketch of a young woman, using her body, mimicks the familiar shapes of a table, the corner of a room, a viewed window and a television stand. There is an underlying pathos in the overall narrative, that evokes empathy for Zhu’s protagonist in this tragicomedy. As we create the environments we hope will suit us, we cannot always control however, the limitations that they impose. ‘Towards The Interior’ opens on the 9th September 2016 and runs through to 16th October 2016.