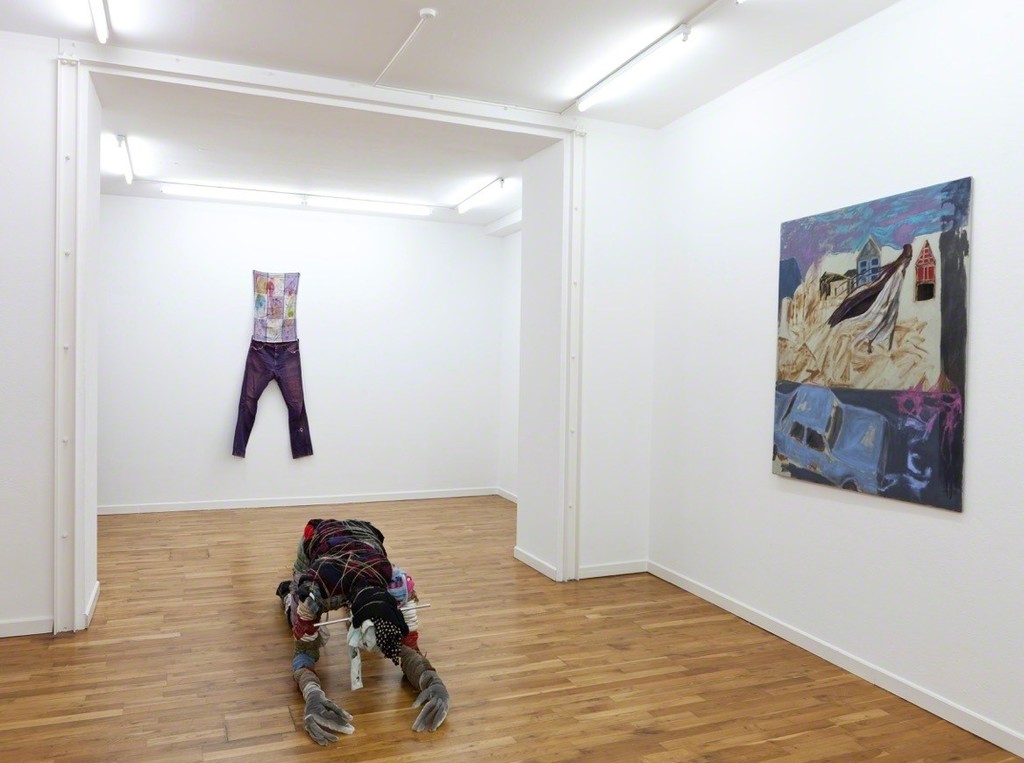 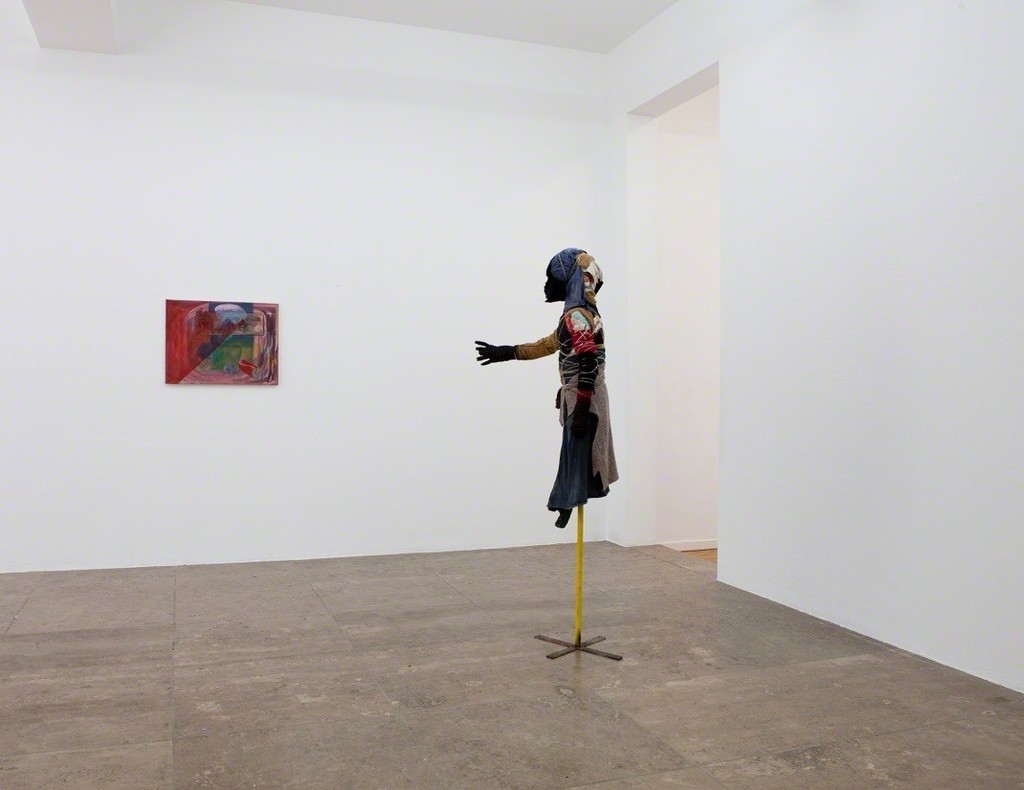 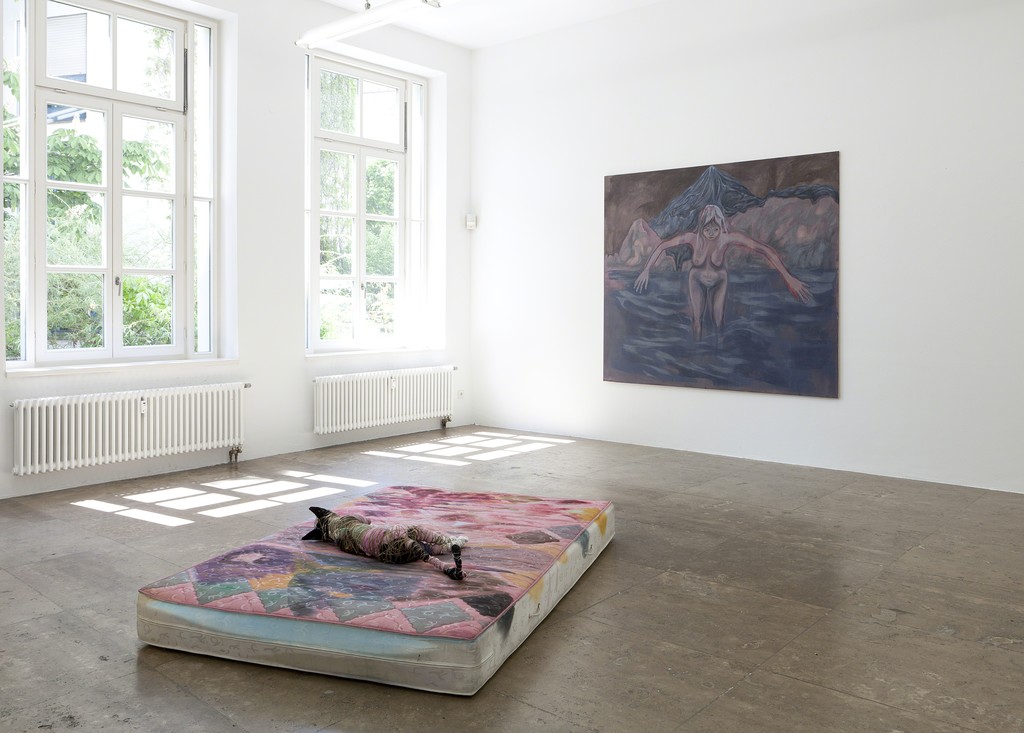 Lutz Braun’s paintings transform our familiar world into what appear to be melancholy fear scenarios of fading away, sublimating into new circumstances. These are more than just degeneration, decay or destruction, because the artist presents his visions in a non-mediated, gentle and sometimes even humorous way. Braun unravels a post-apocalyptic setting which manifests itself in fresh, transparent colors of a spring-like awakening.

A combination of pink, green and yellow tones dominate his painting Schrankenwärterin (Level-crossing attendant). The viewer is confronted by conditions that are at the same time both fabulously shimmering as if in a fairytale, and disintegrating– like a world in the process of emitting its last breath. Metaphorically, a substance that leaks from two test tubes could stand for this. Generated by the painting itself – an inexplicable drain of color –the roof beams of a wretched dwelling lift up and are borne away. This ghostly accursedness appears to be witnessed, overseen, or even countered by a figure positioned in front of the building (a witch?). From the perspective of her physical substance, this James Ensor-esque skull-faced form has, however, little counterweight to offer, as she is no more than a semitransparent, flesh-like gown, lacking any substance beneath.

A blend or simultaneity of vital and destructive circumstances and forces can also be read in the landscape-format painting Die Situation vor dem Absprung, in which two daggers can be seen, one light-colored with the tip pointing downwards, and a darker one, the blade of which is pointing up. In an exciting dialectical way, activity, a readiness to fight, and destructiveness, or rather phlegma and powerless devotion are simultaneously present.

As is often the case, Lutz Braun develops his subjects on surfaces made of diverse materials. The painting Screen shows a visionary landscape with a spectral character and geometric forms. It is made on, or perhaps out of, a chair cushion and denotes the pictorial events of a parallel reality.

The Astral Sleep shows a ´capitulating´ painterly vision that has sunken to the floor, yet simultaneously refers to a superordinate cosmological event. It is painted on a mattress, on which the body of a cat formed of remnants of fabric has lain down to rest. As with many other carpet and fabric pictures, the painter’s hand reacts to already existing idiosyncrasies and patterns. Or, to put it another way, the essence of the fabric already contains the painting that will emerge from it.

In the downstairs gallery space, in addition to a number of paintings on various materials, sculptural works confront the visitor. The figures, made from differently colored textiles and cloths modeled around a wooden frame are revenants that have become makeshift form that – in an animal-physique – have either submissively fallen (back) to the floor, and through their gestures, or rather, in their ´unredeemed´ existence, seek help or poignantly, in an act of empowerment, turn towards the viewer.

With his exhibition Spuk ist die Absicht Lutz Braun renders his public more than witness to some vast decomposition. Braun’s ambiguous paintings and sculptures characterize the present as a threshold moment – as what seems to be the situation before the leap. The artist shows not only the world that, at the end of its processes of civilization has exhausted its resources and production of meaning, but offers a glimpse into a sphere in which human society has crossed a line into a new modality.